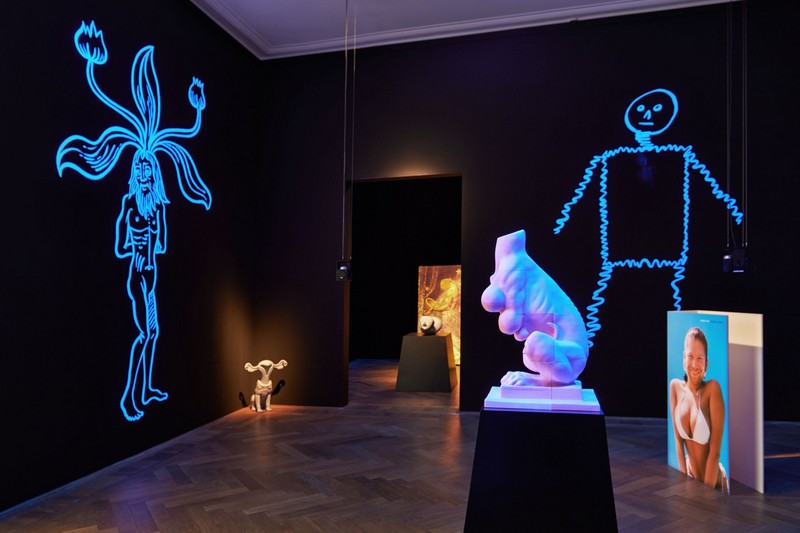 UniAddDumThs is a new installation by Mark Leckey that is ambiguously—and provocatively—both an exhibition the artist curated and an artwork he authored. Many years in the making, the project finds its roots in an exhibition that the British artist curated in 2013. That show was based on the contents of Leckey’s hard drive, which contained digital images of archaic exotica, artworks, and visionary machines he’d collected from the Internet, then placed in folders named “man,” “machine,” and “animal” (also “monster,” which is, according to the artist, a subset of “man”) —his own strange and personal classification system for the world. Each digital file corresponded to some item—a real thing—which was tracked down for the show and bought or borrowed from institutions far and wide. Leckey called the result The Universal Addressability of Dumb Things, and for the duration of that exhibition, the virtual became actual, and ranged from some perfectly ordinary things to some unbelievably extraordinary ones. Among them: a mandrake root “miraculously” taking a human form;an Egyptian mummified cat; a uterus-shaped vase; a 13th-century silver reliquary in the shape of a hand; a giant can of “Felix” brand cat food; the i-limb ultra,the most technologically advanced prosthetic hand on the market; and the giant rocking phallus featured in the film A Clockwork Orange. These things and more rubbed shoulders with ancient, modern, and contemporary artworks by William Blake, Louise Bourgeois, Jim Shaw, and Ed Atkins, among others. The presentation was a surrealist-inspired display that juxtaposed unlikely combinations of artifacts according to the artist’s very particular classification system and logic.

At Kunsthalle Basel, Leckey presents an “ersatz” version of that show that is composed mostly of copies, from 3D printed objects to 2D cardboard cutouts, photographic reproductions,
and other replicas of the original objects. He calls it UniAddDumThs, a shortened, sort of filename-extension version of the original title (as “mpeg” is to “motion picture expert group”). Much of what was formerly unique, rarified, and original is here duplicated: the mummified cat appears in a cotton and wood version, the 13th-century silver reliquary as a larger-than-life cardboard cutout, the Louise Bourgeois sculpture as a digitally scanned 3D printout. And if the artifact wasn’t a unique object to begin with, such as the store-bought speaker in the shape of a dog’s body, called the “Woofer,” it reappears in its already mass-produced form. With UniAddDumThs, Leckey attempts to return the once-“real” borrowed artworks and artifacts back to their status as digital information in a new exhibition of ontologically liminal stuff.
Hollow or flat, oddly textured, and often looking like the cheap substitutes they indeed are, Leckey likes that his replicas appear weirdly lifeless as they sit between worlds, belonging as much, if not more, to the digital realm as to the material one. In fact, the transmutation of the exhibition from digital files on the artist’s hard drive to real (in The Universal Addressability of Dumb Things) and then from that “real” to its simulacrum (UniAddDumThs) follows the appeal made by the Hungarian artist Karoly Tamkó Sirató, author of the Dimensionist Manifesto of 1936 which Leckey cites in his lecture “In the Long Tail,” for sculpture to be “vaporized” such that “rigid matter is abolished and replaced by gauzefied materials.” Thus even the scenography of Leckey’s new Kunsthalle Basel exhibition is a form of “vaporized” copy. Whereas the earlier scenography involved custom-built wooden display structures corresponding to each of Leckey’s main subject “categories” (man, machine, animal), here they are printed vinyl backdrops suspended from metal rods, with floating inflatable lighting overhead—a softer, more seemingly airy and ad hoc version.
Following a process of sampling, collecting, appropriating, and “aggregating” (Leckey’s term) that has been central to his work from its very beginnings, UniAddDumThs reveals much about the artist’s thinking and practice—his persistent fascination with things as much as with technology, the Internet, and the slippery relationship between the real and its simulacrum. It is no wonder that Leckey is so influential to a younger generation of artists who finds in his work a pioneering attempt to address how the products of contemporary technological advances construct our identities, memories, and desires. UniAddDumThs is a lesson about this, and, indeed, about all systems of order: how they depend entirely on the individual who categorizes them, and how they organize the universe in unexpected ways Here, Leckey’s version of the world highlights the mixing of “high” and “low” that is central to his entire oeuvre. Rarefied heritage and pop-culture icons, bona fide artworks, and brand-name mass-produced stuff get tangled up. The cartoon character Felix, represented by both a giant inflatable feline and a can of “Felix” brand cat food, meets a painting by the Renaissance master Piero di Cosimo, represented through a reproduction on a vinyl backdrop. A Nike Transformer shoe meets the ancient naked figure known as the Cerne Abbas Giant, whose outline is reproduced on the wall of the “monster” room. And if The Universal Addressability of Dumb Things was an exhibition curated by Leckey, UniAddDumThs, its copy at Kunsthalle Basel, is something like a total artwork authored by Leckey, although a “gauzified” one, that raises irreverent questions about what aura, authenticity, and authorship could mean in our 21st century, Internet-driven, post-digital age.

Mark Leckey was born 1964 in Birkenhead, UK; he lives and works in London.

UniAddDumThs is made in collaboration with WIELS, Brussels and MADRE, Museo d’Arte Contemporanea Donnaregina, Naples.

This exhibition benefits from the generous support of Regent Lighting.
www.kunsthallebasel.ch