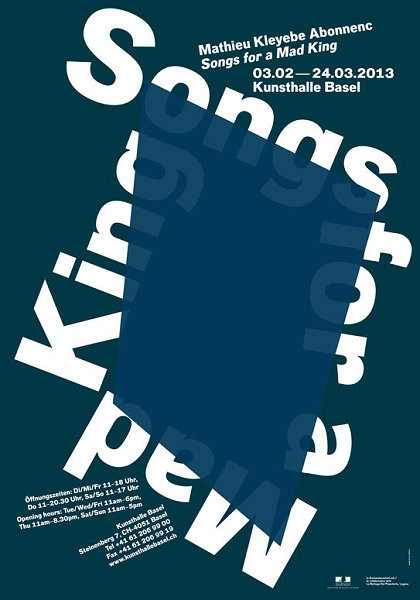 In his quest to give voice to alternative, so-called minor histories, the artist Mathieu Kleyebe Abonnenc engages myriad forms of historical research and representation, focusing on historical facts and figures endangered by oblivion or misinterpretation. For most of the past decade, the Paris-based artist, who was born in French Guyana, has worked with the history of colonisation and decolonisation, in which he explores the complex relationship between the struggle for independence and the construction of identity. Rather uniquely, Abonnenc’s role in his research-based projects and exhibitions becomes that of evocating the historical legacy of others, as opposed to becoming himself the author or subject of the histories he limns.

At Kunsthalle Basel, Abonnenc’s exhibition, entitled “Songs for a Mad King,” will transform the main exhibition space into a temporary memorial to the music and personality of the American musician, singer, and composer Julius Eastman (1940–1990). Eastman’s singular and inimitable contribution to contemporary, avant-garde classical music will be on display in Switzerland for the first time, with his three compositions for four grand pianos—Evil Nigger (1979), Gay Guerilla (1980), and Crazy Nigger (1980)—publicly performed during the duration of Abonnenc’s show. The installation itself will consist of the grand pianos, which will be used during rehearsals held three times a week, as well as during the public concerts taking place every Saturday during the run of the exhibition. Together with professional pianists from Basel, the Parisian conductor Jean-Christophe Marti will rehearse Eastman’s three works for piano in front of the exhibition audience, who will also be asked to participate in the performance of Crazy Nigger.

The exhibition’s title refers to a 1969 recording, “Eight Songs for a Mad King,” by Peter Maxwell Davies. At the center of this theatrical musical composition stands the figure of a flamboyant king who attempts to teach a group of caged birds to sing. It was Eastman himself who sang the role of the infamous king in Davies’s recording, leading Abonnenc to title his Kunsthalle Basel show—a work of strange, affecting homage—Songs for a Mad King.
www.kunsthallebasel.ch