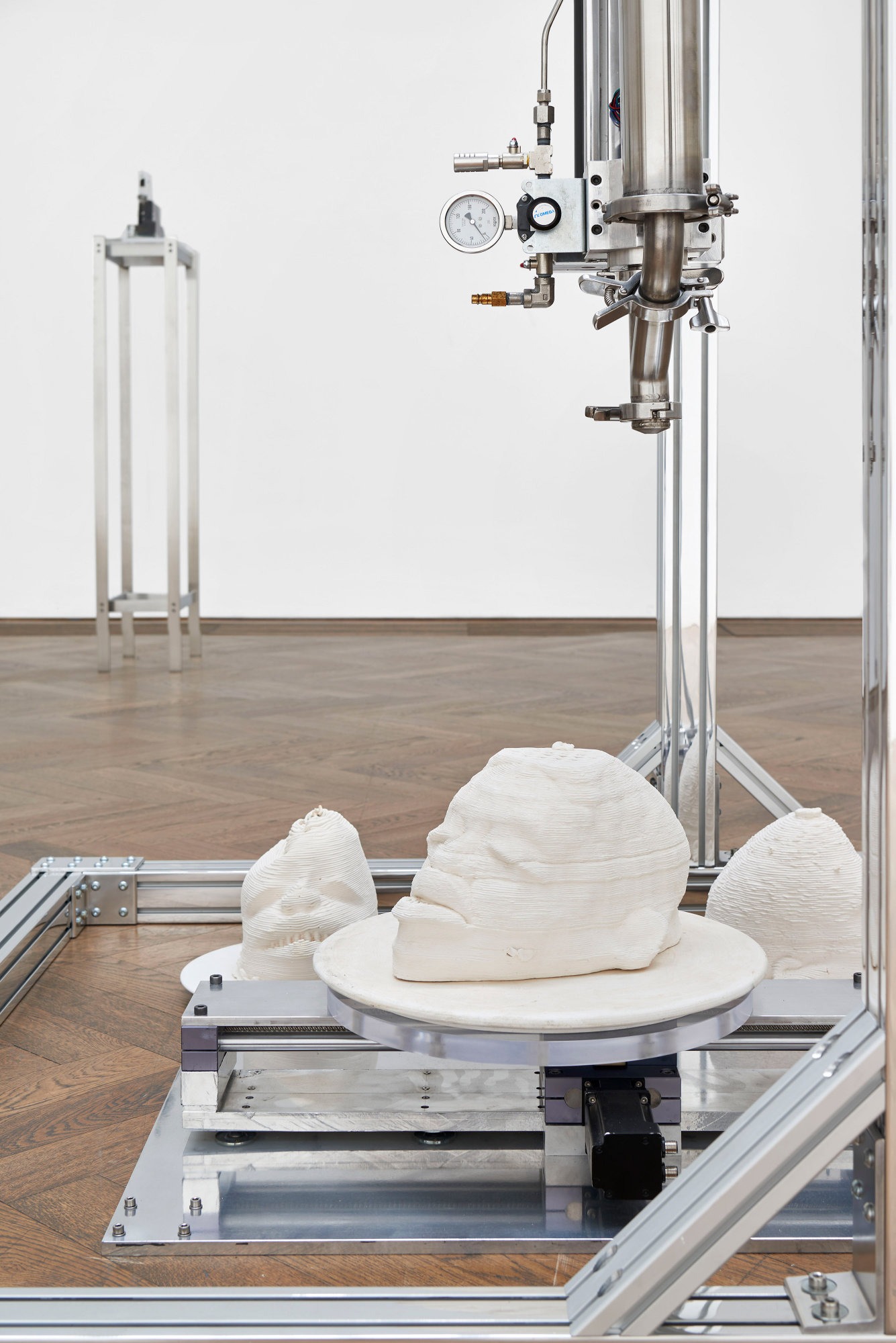 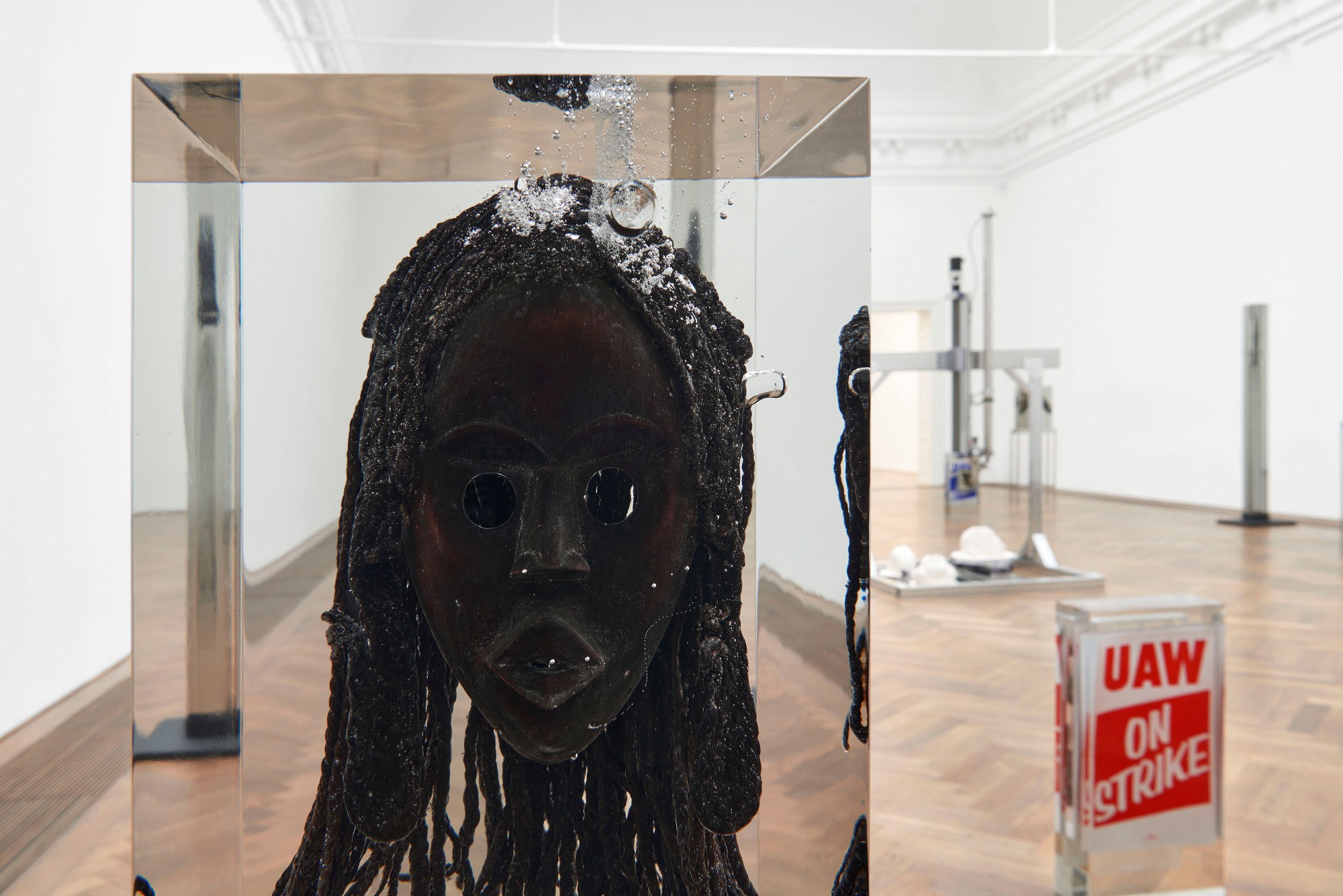 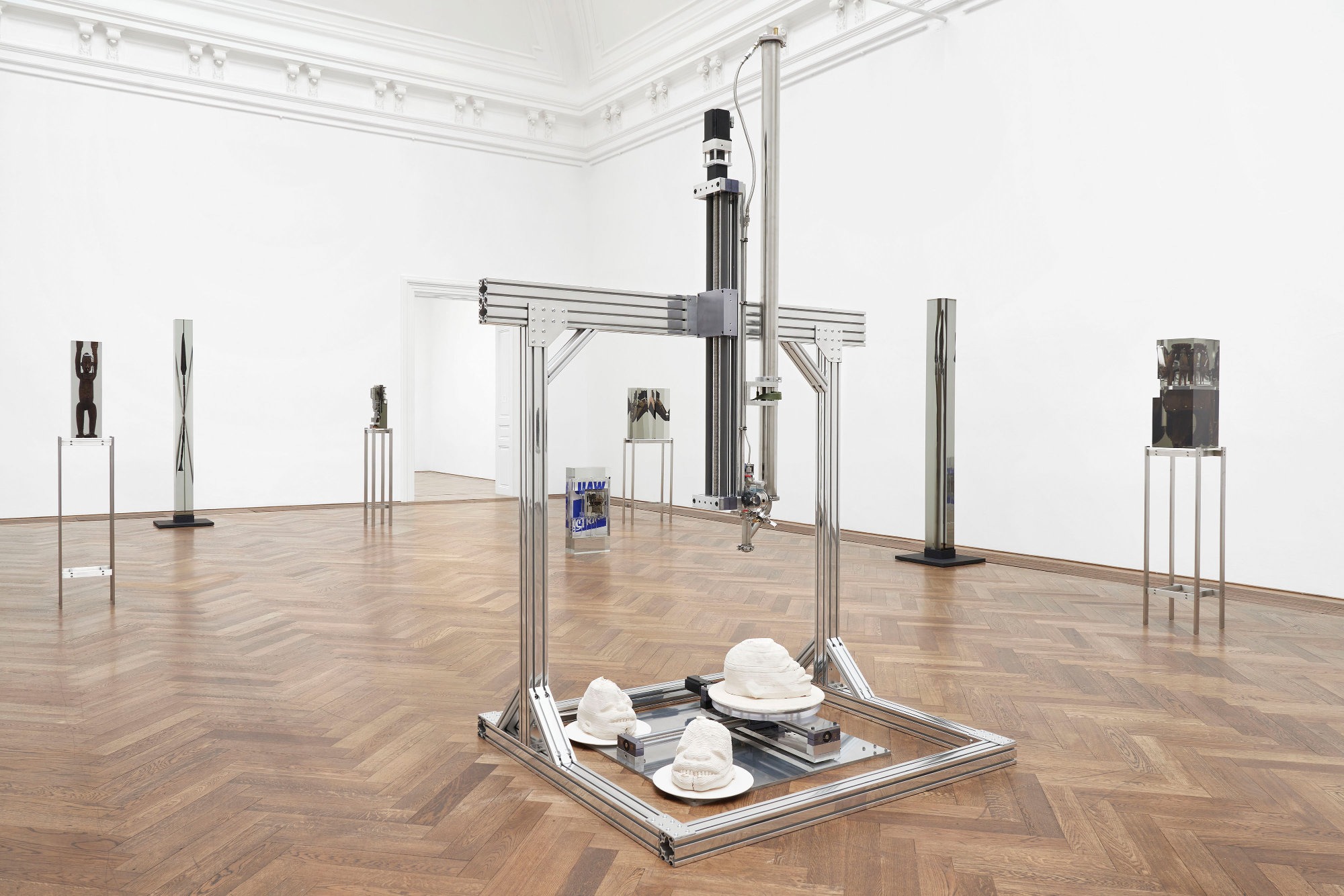 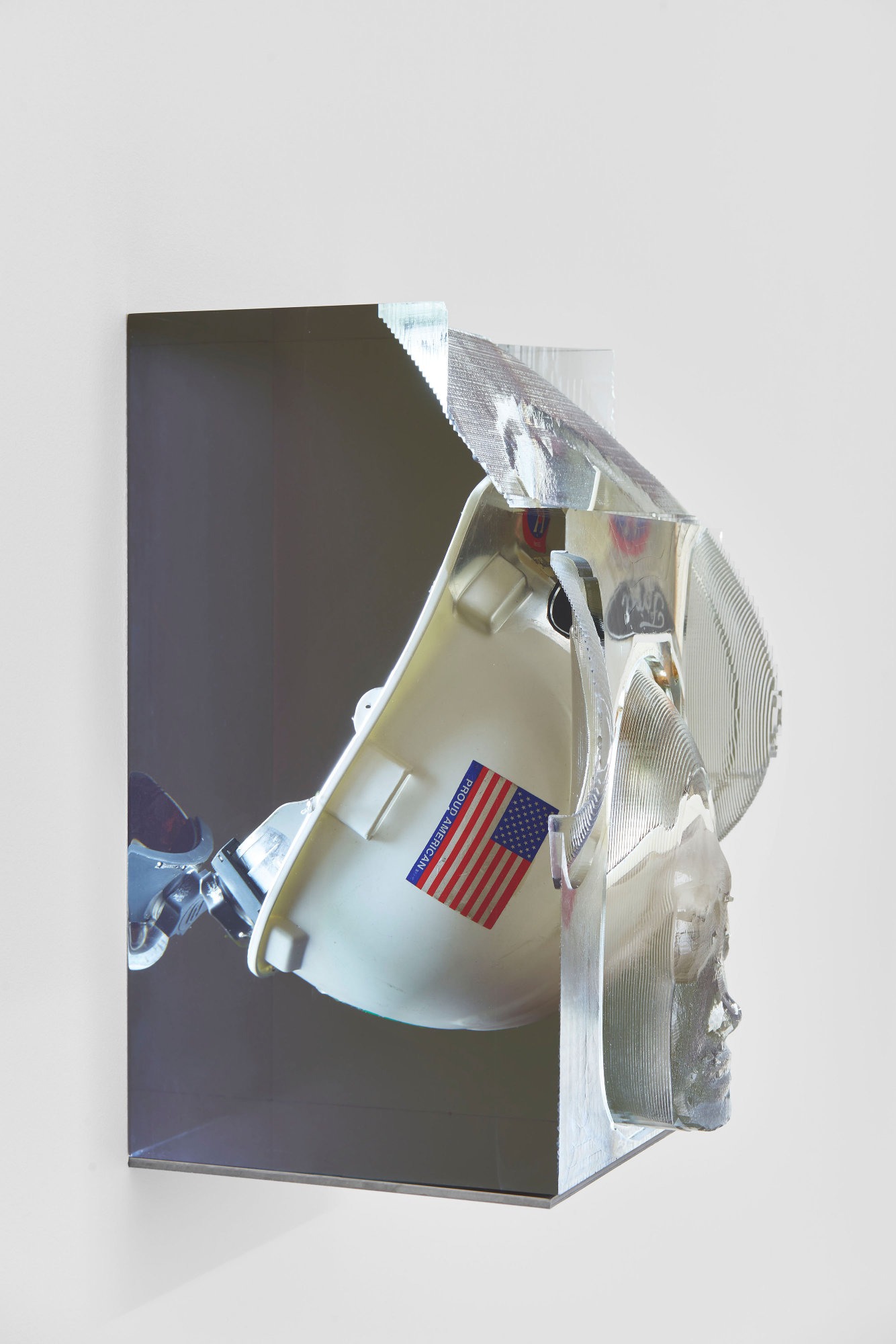 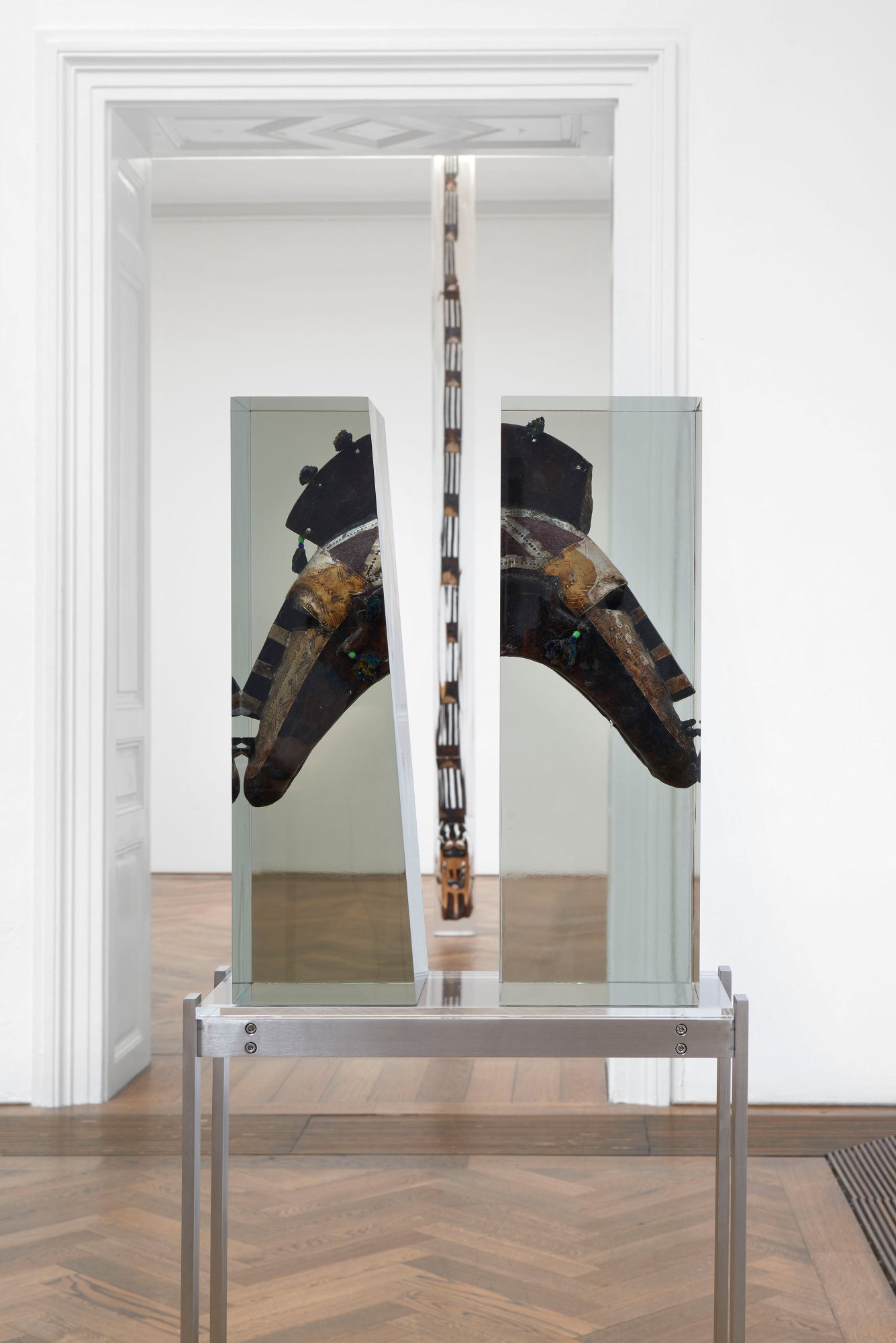 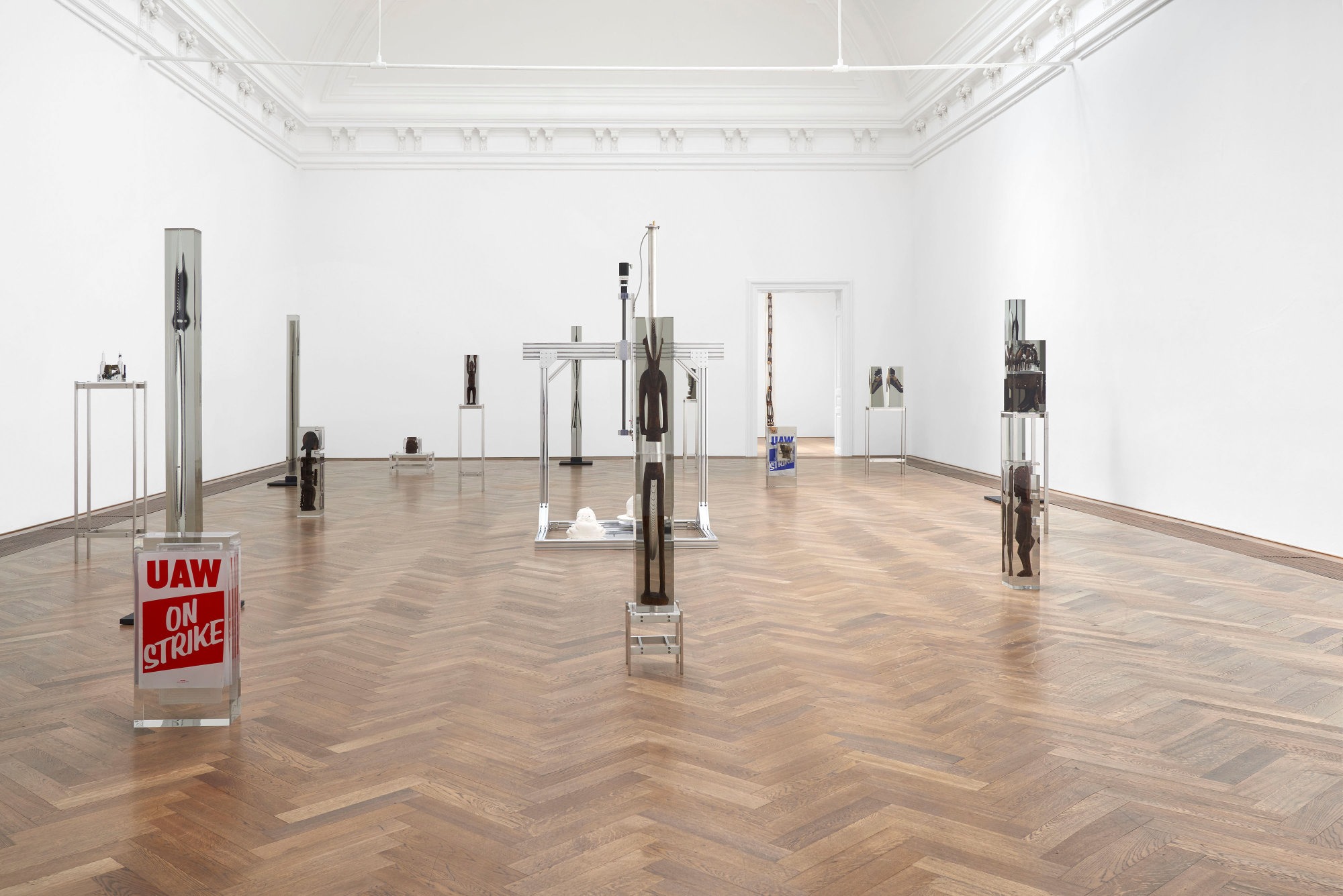 Matthew Angelo Harrison, installation view, Proto, Kunsthalle Basel, 2021. Photo: Philipp Hänger / Kunsthalle Basel
Like dragonflies in amber, Matthew Angelo Harrison’s polished blocks of transparent resin are time capsules of a sort. They populate the artist’s first solo exhibition in Europe—featuring all new work and his most ambitious project to date—where the personal and ancestral collide with the historical and political. Luminous prisms of varying opacity (some tinted, some clear) encase wooden African effigies, ceremonial masks, long-handled spears, or, in a single spectacular case, a nearly five-meter- high totem with a head at its base. Hailing from the cultures of Bambara, Dogon, Makonde, Senufo, and others, most are attributed to un- known makers and were bought by the artist from European secondary market dealers selling on the internet. The digital trade routes that these objects traveled—contemporary versions of those that once carried enslaved Africans across the Atlantic Ocean— interest Harrison, just like the transnational transactions, dispossession, and violence that the circulation of these objects chronicles.

The interruption of this traffic by the artist is central to understanding his practice, as is the recirculation of the artifacts in an attempt to complicate how we think about the colonial project and track its enduring legacy in the twenty-first century.

The exhibition opens with a clear resin block containing a mid-twentieth-century mask from the Dan tribe, its gouged eyeholes and tendrils of hair floating amongst air bubbles, appearing to be submerged in water but miraculously breathing. For now. Entitled Bated Breath, the sculpture summons another time and place, traditions and rituals far from the US where the artist made it or Europe, where it now stands. Yet, it also eerily portends a moment when the words “I can’t breathe” have become a rallying call. Equally, Reservoir Master—presented at some distance behind Bated Breath and containing a Dogon Nommo figure with its hands up—recalls the gesture signaling submission to the police, now also doubling as an iconic protest gesture in the struggle against continued police killings of un- armed people of color. Like any time capsule, Harrison’s objects speak not only of the past but also to the present.

Scattered among these are blocks that envelop workers’ protective gear or labor union para- phernalia—some dating from the last major US United Auto Workers (UAW) strikes of the 1990s. These may not be the spoils of conquest and colonial rule, but they are Black relics of another sort—born from African-American labor and collected by the artist’s own mother and her union colleagues. They underline the critical intersection of colonialism, low-wage labor, and technology at the core of Harrison’s concerns.

Among his prismatic forms are those cut into stacked segments or etched using a CNC router (computer-controlled milling machine) to create surfaces and cavities with no less complexity than a car’s engine block. So it is with Bodily Study: Inverted W, in which the gloves of a worker seem so mangled by the cuts of the CNC router that they are hardly recognizable. Or, Single Mother (Divided), in which the artist’s own mother’s union- embossed bomber jacket encounters similar treatment.

African artifacts face such cuts and deformations, too. Observe the resin-embedded wooden mask in The Navigator or figurine of a boy in Touched By an Angel, each rendered partly illegible by the mechanical hive of cylindrical holes and raised nodes surrounding them, formed by machines following coordinates written in computer code. Or even Headdress, presented at the very end of the exhibition, in which a worker’s protective helmet, covered in union and “proud Ameri- can” decals, is encapsulated in a tinted resin block, and from which, on its synthetic material edge, a spectral face emerges—3-D- scanned by the artist from an African staff and carved in a data-driven CNC rendering. In Harrison’s hands, Minimalism’s strict geometries are haunted by the ghosts of imperialism and factory labor struggles, insinuating continuities between them.

He would know a thing or two about these regimes. Harrison hails from a family that has worked in Detroit’s various automotive plants, and he himself worked in the proto- typing division at Ford. Both the logic of industry and Motor City’s complex history—a city marred by white flight and wracked by devastating poverty, while also being the birthplace of the assembly line, Motown Records, the machinic sounds of techno, and so much more—served as vital backdrops for Harrison’s coming-of-age as an artist. In his newest pieces, Detroit and labor have come ever more explicitly to the fore as the artist exposes relations between contemporary, low-wage, precarious labor and the slavery that the US supposedly abolished over a century and a half ago.

At the very heart of the exhibition’s largest space sits a polished aluminum 3-D printer, Proto-fountain, constructed by the artist through the modification and hybridization of existing technologies. The clean, gleaming machine is at once a monumental sculptural installation and a tool, which stands in for a performance planned for the closing week of his exhibition. There, he will live-print clay sculptures based on 3-D scans of the artifacts used within his sculptures on display. As with all of Harrison’s 3-D printed works, a few examples of which are on view, the artist’s de- liberate programming of glitches and errors into his intentionally low-resolution machinic output means that every “replica” is, in fact, new and different. The results, generated in coiled ribbons of clay, appear flattened, doubled, or left partially undone, like freakish versions of the originals and rejecting the slick perfection common to 3-D printing.

Harrison thinks of these, like all his works, as prototypes, of a kind. Deriving from the Greek proto, for “earliest” or “first,” a proto- type is the opposite of a finished product: it acts, instead, as a model built to test out the validity of a concept or process. As such, it is a material projection of something that hadn’t existed before and, in that sense, helps imagine a future. This seems appropriate for Harrison, who uses plunder from the past and algorithmically driven machines of the hyper-present to give form to something that might look like it is the result of time travel: antiquated and futuristic, organic and mechanical, ritualistic and industrial at once.

Yet, the urgency one feels in front of Harrison’s achingly elegant objects arguably comes from them being so squarely of a time—our time—in need of a radical reckoning with all the ways its heinous past persists. The result, for all its strange, incandescent beauty and complex technicity, is a body of work that offers itself as a lens (they are prismatic, after all) through which we can begin to comprehend where we came from and what is still to come: proto.

Matthew Angelo Harrison was born in 1989 in Detroit, US, where he lives and works.
www.kunsthallebasel.ch