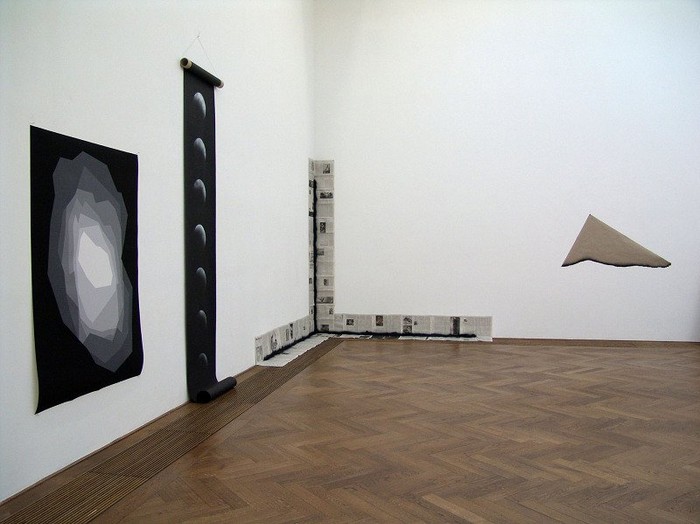 “I construct signs that let the semantic threshold become visible,” said Michael Hakimi (born in Eutin, Germany, 1968) in a recent interview. The threshold is a good example here – as it is both a part of the building, dividing the rooms, and more generally a difference between things that we perceive. At the Kunsthalle Basel, the artist shows his new installation interlocking two adjacent spaces. Depending on the point of view, the exhibition’s title – ROOF – may simply delineate the area on top of a building, or direct our attention to the heights above. The first space contains works realized in different techniques: black geometric shapes cut out of plywood lean against the wall, globes, coronae of the sun or other celestial bodies are spray-painted on different kinds of paper, or stuck on the walls. This ensemble of works evokes the broken skyline of a city at dusk, the cut-and-paste technique of the multiplication and repetition of motifs sets the viewer in the middle of a storyboard. The work develops as a fast-paced rhythmic collage of frames, and gains the quality of an early cinematic experiment. The second space may represent the proper roof. The monumental black shapes, painted directly onto the walls of the room, are supported by aluminium tubes attached to the walls at one end, and to the floor at the other. Two-dimensional images propped by solid sculptural infrastructure allude to the reduced contours of advertising signs seen from the back. Between the sign and the object falls the shadow, and it remains firmly there.
By the end of the year a catalogue of works by Michael Hakimi will be produced in collaboration with the Kunstverein Hamburg.
Michael Hakimi (born 1968, in Eutin, Germany)
Solo exhibitions (Auswahl): 2005 Ruine TV, Galerie Karin Günther, Hamburg / 2004 Der grosse Ofen, Kunstverein Hamburg / 2003 Am Zaun, Galerie Borgmann Nathusius, Köln.
Group exhibitions (Auswahl): 2007 Le Nuage Magellan, Centre George Pompidou, Paris; The Broadway Syndrome, Centre d’Art du Parc St. Léger, Pouges les Eaux; Curacion Geometrica,The Reliance, London / 2006 Art and Fiction, Besktas Cagdas, Istanbul; All dressed up with nowhere to go, Sorcha Dallas, Glasgow / 2005 It takes some time to open a Oyster, Centro cultural Andratx, Mallorca; Ars Viva 04/05 – Zeit, Zacheta Museum, Warschau, Kunstverein für die Rheinlande und Westfalen, Düsseldorf
www.kunsthallebasel.ch