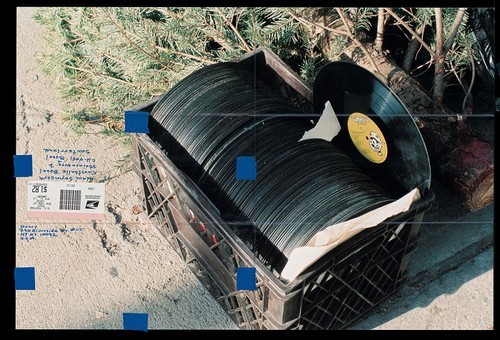 Kunsthalle Basel is delighted to announce Speaker Receiver, the first institutional show in Europe of works by Moyra Davey. Born in Canada in 1958, the artist lives and works in New York.

Davey’s practice encompasses photography, film and video, as well as reading and writing. She conceives of the latter two activities as inseparable and equally significant techniques of working: her alert, incisive readings of philosophy and literature prompt new writing, which in turn reflects back on already existing texts, building, as it does, on fragments, memories and quotations. By suggesting an affinity, or even a reciprocal mode of influence, between the acts of reading and writing, Davey locates the point at which the desire for non-differentiated production-consumption makes the two usually opposed sides of the process of communication meet and cross; that is to say, in Davey’s work, writing is reading. The artist dealt with these matters extensively in her book-length essay The Problem of Reading (Documents Books, 2003). Her writing is not to be understood as a means to merely annotate her visual production, or to present the source material for “proper” works, but as an element of her practice devised to project the very ideas that her photography and filmmaking are attempting to explore. In fact, Davey formulates no less than a call for photography that would have its origin and ending in writing—a reasonable claim, if we consider photography as a way, per the Greek etymology of the word, to “write with light”.

The Kunsthalle Basel exhibition includes two of Davey’s recent videos: Fifty Minutes (2007), which is a soliloquy composed of passages on subjects of pertinence, such as money, time, eavesdropping, Hollis Frampton, nostalgia, fear, pregnancy, a couch, and a fridge (the latter object also features prominently—topped with a skyline of food and medical supplements—in one of Davey’s photographs), and My Necropolis (2009), which records the artist’s visits to the graves of writers in several Parisian cemeteries. In the exhibition, these two videos are to be viewed on one monitor from a comfortable sofa placed in the gallery space, as if to make clear that Davey’s domesticity is at war with the museum.

Davey’s photographs on view, meanwhile—modestly sized, traditionally printed and limited to a small range of motifs—represent in a non-spectacular way the conditions of living and working as a metaphor for the human condition and its contradictions. The images aim at establishing yet another, more fundamental pair of correlating states than those of transmission and reception—those of working and living. Or perhaps they propose the idea of working as living, a non-alienating work and thus an existence aware of its newly recognized abilities, possibilities yet to be achieved and inherent limitations. To that end, Davey makes us, the onlookers, accomplices in the process of living that she portrays in photographs of inanimate things, which speak of their use and of those who use them. And, in doing so, she succeeds in bringing this “well-examined life” (as Helen Molesworth has put it) to light. Her photographs are elements and records of what the Italian writer Cesare Pavese called in the title of his diaries, il mestiere de vivere—the métier, or profession, of living.

Speaker Receiver, the title of Davey’s show at the Kunsthalle, echoes film theorist, art historian and critic Kaja Silverman’s reading of the notions of transmission and reception of images and words in terms of the politics of image production and gender. As Silverman describes in her essay “The Author as Receiver” (October, no. 96, 2001), and in her recent interview with George Baker (Artforum, February 2010), such transmission is an instance of patriarchal, totalizing order, while reception is a productive possibility in the hands of artists. Likewise, Davey’s proposition is that artists are receivers, no less than they are speakers, an idea that also resonates, perhaps, with the “negative capability” (“when man is capable of being in uncertainties”) mentioned by John Keats in a letter to his brother written on December 21, 1817.

The exhibition in Basel is accompanied by a new monograph also titled Speaker Receiver. The publication is edited by Adam Szymczyk and published by Sternberg Press, and includes essays by George Baker, Chris Kraus, Bill Horrigan and Eric Rosenberg, as well as an interview with the artist. Speaker Receiver also features “Index Cards”, a new piece of writing by Davey, in which she reflects on subjects such as a recent illness, her personal mapping of Paris and her habit of reading newspapers. Rather than formulating a systematic argument, the essay unfolds in a series of short “takes” or fragments, and it commences with a quote from a Walter Benjamin letter to Gershom Scholem, in which Benjamin enigmatically refers to the clock he sees from the window of his studio as a “luxury [he] cannot do without”. Additionally, “Index Cards” includes short studies on figures as remarkable and extreme in their individual qualities as the architect Aldo Rossi, the writer Jane Bowles and the chess prodigy Paul Morphy.

In the book, which was designed by Julia Born, an Amsterdam-based Swiss graphic designer, Davey brings the diverse aspects of her work together. Photographs distributed in order of their appearance within the texts interrupt the various writers’ contributions. Furthermore, for Davey’s own essay, and for the interview (which was improvised and undertaken concurrent with the preparations for the exhibition), the artist chose to reproduce her photographic “Mailers”, a unique series and format of work that Davey likes to refer to simply as “mail art”. Printed in a street lab, the thirty by forty-five centimeter photographs are folded by the artist and sent by mail to the curators and gallerists who propose to show them. When the photographs arrive, they are opened and flattened out. Arranged in a grid and pinned to the wall—with names and addresses legible, postmarks, creases and accidental signs of wear and tear kept intact—the “Mailers” embody the very notion of “accident”, which is crucial to Davey’s writing and in particular to her essay “Notes on Photography & Accident”. Several grids of “Mailers” are shown in the Kunsthalle Basel exhibition, along with the individual photographs that represent selected details of the artist’s studio and apartment, where she lives with her husband and son. These details include a dog’s paw on a dusty floor, the needle resting on a vinyl record, covers and stacks of records, a fluorescent light tube inscribed with the words “long life cool white”, books and papers piled on shelves, newspaper cuttings, cheap buttons, used copper pennies imprinted with Abraham Lincoln’s profile (“Copperheads”, 1990), a collection of amplifiers and speakers, empty whiskey bottles and much more.

The work of Moyra Davey was presented in the survey exhibition “Long Life Cool White,” at the Fogg Museum, Harvard University Art Museums, in 2008; Helen Molesworth curated the exhibition and also edited the accompanying catalogue of the same title (Yale University Press, 2009). In New York, Davey exhibited with Colin de Land’s famed gallery American Fine Arts, and she was a partner in Orchard, the cooperative, artist-run gallery. Moyra Davey was also editor of Mother Reader: Essential Writings on Motherhood (Seven Stories Press, 2001), an “anthology of texts on the intersection of motherhood and creative life”. Her recent group exhibitions include “Photography on Photography: Reflections on the Medium Since 1960”, at the Metropolitan Museum of Art, New York, in 2008, and “Calendar of flowers, gin bottles, steak bones” (with James Welling and Claire Pentecost), at Orchard, New York, in 2007. Upcoming group shows include “Atlas” (curated by Georges Didi-Huberman) and “Mixed Use, Manhattan: Photography and Related Practices, 1970s to the Present” (curated by Lynne Cooke and Douglas Crimp), both at the Museo Nacional Centro de Arte Reina Sofía, Madrid. Davey’s work is currently on view in “Strange Comfort (Afforded by the Profession)” (curated by Adam Szymczyk and Salvatore Lacagnina), at the Keats-Shelley House, Rome (until September 25).
www.kunsthallebasel.ch