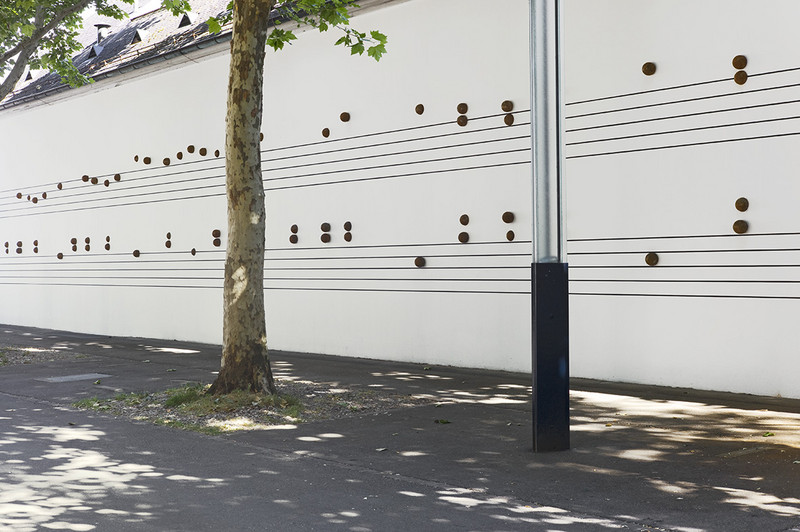 Nevin Aladağ (*1972 Van, TR, lives and works in Berlin) makes objects of everyday use as well as situations and scenarios of daily life into the starting point for her works and investigates their cultural and political codings, their origin and history. Insofar as Aladağ detaches everyday objects from their original context and renders them dysfunctional, she changes the way they are read and draws attention to the manifold aspects of their function and use. Alongside the aesthetic and functional considerations that determine the choice of material and the form given to an object, the artist thus points up the ideological, gender-specific, political and cultural motives that accompany its creation. Aladağ is also interested in the non-material facets of everyday culture: she initiates and documents cultural actions such as dances, games and music, which she shows woven into the daily life of society. Public space thereby becomes a field of observation and a place of inscription for these works, in which the private intersects with the social and political.

For the back wall of Kunsthalle Basel, the artist has conceived the installation Marsch. The wall serves as an outsize sheet of music that shows the opening bars of the Rondo alla Turca by Wolfgang Amadeus Mozart. Also known as the Turkish March, the allegretto “in the Turkish style” was composed by Mozart in 1783/84 as the last movement of his Piano Sonata No. 11 in A major (KV 331). Its musical motifs imitate the percussion instruments employed in Turkish Janissary bands, a core element of Ottoman military music. Janissary music and its instruments became known in Europe, and in particular Austria, in the wake of the Ottoman invasions and as stylistic elements frequently found their way into the music of the epoch. The Rondo alla Turca is one of the best-known examples of orientalism in western European classical music – a stylistic vogue borne out of the general interest in what was perceived as the “exotic” culture of the Ottoman Empire. In a similar fashion to other traditional and regionally anchored dance and folk music, military music was part of the motive and thematic repertoire of European high art.

Nevin Aladağ represents the heads of the notes by means of segments of cast-iron spheres that are based on an original 19th-century cannonball preserved in the Historical Museum in Basel. The varying volumes of the segments give the impression that they have been fired at the wall with differing degrees of force. Aladağ thereby calls to mind the true purpose of military music: its primary function is to dictate the choreography of troop movements, both on the battlefield and in peacetime parades. The time signature determines the marching speed and formation of the soldiers. The psychological role of military music is equally relevant: it is intended to reinforce esprit de corps and at the same time intimidate the opponent.

The title Marsch (March) further reinforces the military reference implicit in the musical motif from the rondo. At the colloquial level, the title can be read as an imperative – “March!” – and hence, depending on interpretation, as a playful or stern command to start moving. The viewer looking at the back wall is requested to walk the length of the notation, which marks a temporal and spatial progression. Thus the artist not only inscribes the music visually into the public space, but also gives it a material presence that unfolds as we move along it. The word “march”, in its meaning of an organized procession of people as a form of protest or for military purposes, is found in a very similar form in many European languages, pointing to a common origin: as well as Marsch (Ger.), it can be recognized in marche (Fr.), marcia (It.), marcha (Sp.) and marş (Turk.). In etymological terms “march” goes back to the Frankish markōn, “to make a mark” or “mark out”, and thus combines a motif of movement with a figure of speech.

The notation of music captures, in abstract graphic signs, something that becomes what it is only through being performed. This performance is thereby largely regulated by additional signs in the notation: bar lines, the stems of the notes, accents, tempo... Aladağ frees Mozart’s Turkish March from its rigorous structure and renounces all indications as to how it should be played. Not even the fluctuating volumes of the hemispheres provide clues to the musical interpretation of the piece, since their variations bear no relation to the values of the notes. The interpretation of this march thus navigates between strategy and chance – a situation that is comparable with the dynamics of a military conflict.

Aladağ’s Marsch thus fuses making a mark, as originally signified by the word “march”, with the history of a musical motif that was extracted from its functional, military context and, overstepping cultural boundaries, was sublimated and depoliticized by the high art of another nation. The clear sculptural decisions made by Nevin Aladağ render this complexity visible.
www.kunsthallebasel.ch