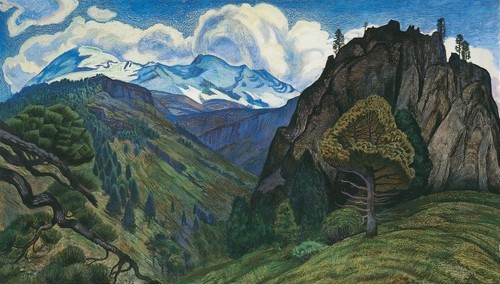 The title of the exhibition is borrowed from Malcolm Lowry’s famous novel Under the Volcano, published in 1947 and regarded as one of the most outstanding analyses of the crisis of modernity in the 20th century. In terms of time and space, the book’s narrative structure is anchored in the ‘Day of the Dead’, November 1, 1939 – two months after the outbreak of the Second World War – in the semi-fictional city of Quauhnahuac, which is modelled on the Mexican city Cuernavaca, in which Lowry lived in 1936. At that time, Mexico was a popular travel destination and place of exile for many writers and political activists (among them Sergei Eisenstein, Antonin Artaud, Leo Trotsky and Luis Buñuel) because of its left-wing policies. The social situation in Mexico then was characterized by a fruitful climate of cultural exchange and a relative freedom from political activity. The book’s main protagonist is Geoffrey Firmin, a British consul in Quauhnahuac, whose existential struggle and ultimate failure become metaphors for the advance and simultaneous regression of modern man.
The exhibition QUAUHNAHUAC – The Straight Line is a Utopia brings together works by contemporary international artists who refer to the above-mentioned historical situation and some of whom have themselves set out on a journey – real or fictional– to Mexico or elsewhere. The idea of the journey, be it physical or mental, and the respective associations, and the handling of the realities encountered in certain remote area are examined by the participating artists as a condition of and means for making art.
In the first room, Maria Thereza Alves (*1961) and Jimmie Durham (*1940) present a new installation which consists of photographs, objets trouvés and sculptures that address the current and past history of Cuernavaca and the surrounding state of Morelos. Durham and Alves spent several years in San Anton, a suburb of Cuernevaca, where they were actively involved in environmental protection and human rights for the Indian population. The installation is a personal archive about their own experiences in Mexico. In Cuernavaca, Alves and Durham met the Mexican artist Cisco Jimenéz (*1969) and worked on several projects with him. Jiménez is represented in the exhibition with the work Holy death with pacifiers, 2000 which is a depiction painted on a wall cloth of the Madonna of ‘Santa Muerte’ (‘Our Holy Mother of drug victims and dealer gangs’).
The exhibition includes also Robert Smithson’s (1938 - 1973) Partially Buried Woodshed (1970), four photographs and film footage of the work that document the collapse of a wooden hut which the artist found on the university campus in Kent, Ohio, in 1970 and which he had slowly covered with earth and thus buried. Smithson has often produced his works during travels and excursions to some specific place, and they thus reflect on the limits of museums and galleries. One of his journeys was to Mexico in 1969, and after it he wrote his essay Incidents of Mirror-Travel in the Yucatan (1969). In that text he refers to John L. Stephen’s famous reportage of the same name on his exploratory trip to Mexico in 1841. This contains descriptions of buildings and monuments of the past Indian high culture. In addition to Smithson’s Partially Buried Woodshed, the exhibition also contains the two volumes of the first English editions of Stephens’ book, as well as the drawings it contains by Frederick Catherwood of temples and stele.
Also included in the exhibition are further cultural-historical references to the history of Mexico in the book Como nace y crece un volcán: el Parícutin by Dr. Atl (Gerardo Murillo) (1875 - 1964). This book contains quasi-scientific yet artistically ambitious coloured drawing and paintings by Dr. Atl, who from 1943-1950 observed the eruptions of the Parícutin volcano.
This summer, Friederike Clever (*1971) travelled to Mexico to visit volcanoes as Popocatépetl and Nevado de Toluca and accompany archaeologists to excavations. Back in her studio in Berlin, Clever produced both new works using different printing processes and drawings closely linked with the places she had visited. Large horizontal sheets show prints taken from the floor of the artist’s studio, the texture of which is transferred to the paper and painted over in colour: these are reminiscent of geological formations, archaeological sites of discovery, or certain sections of a landscape, such as the Barrancas, the water courses and narrow canyons typical of the geography of Cuernavaca.
The Scottish artists Ross Birrell (*1969) and David Harding (*1938) also took a trip to Mexico, during which they made a semi-documentary film in which, among others, several contemporaries who knew Malcolm Lowry speak. While in Cuernavaca the artists also produced a mural painting in the muralismo tradition, and documented the process on film. The artist have reproduced this mural in the exhibition room with slight alterations. While on the trail of Lowry they also developed a wooden construction which alludes to the wooden hut in British Columbia in which the author lived and which was destroyed by fire.
The Basel artist Hildegard Spielhofer (*1966) presents photographs from her current series Ultimo Viaggo, 2006 („The last journey“), which she has taken over the past seven years on her travels to the coast of northern Sardinia. On one particular beach the artist found wreckage from the sailing boat Voile Liberté, 2006, which she photographed under different light conditions; illuminated by torches at night, in the moon light, or during the day. The artist has also included part of the washed up wreckage in the exhibition putting it on show alongside her photographs.

An extensive exhibition brochure will be published containing illustrations and texts by Adam Szymczyk, Maria Thereza Alves, Jimmie Durham, Francis McKee and Valerie Bosshard. This exhibition is generously supported by: