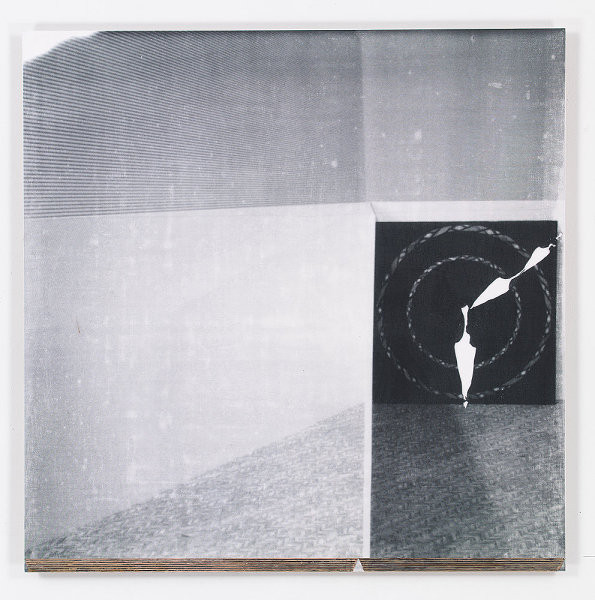 Unlike previous and subsequent chapters, which reflect their immediate contexts, Spine takes the book “Spine,” as its primary site reference. This group of paintings is an abbreviated index to my work since 2001, and in this sense it is retrospective.

In plan, the exhibition design alludes to an open one page book, the shape of an arrow, and the shape of a perspective diagram. These three concepts—the page, the arrow, and perspective—conjure narrative through the sieve of architecture and the book form, and summon a legibility that my growing archive suggests.

When I make paintings, I think of them firstly as images that can be placed next to other images. Spine put that idea to the test due to the huge space of the room. This necessitated the paintings to be hung in long lines, which in turn necessitated an almost literal transfer of meaning from one painting to the next. The viewer read the paintings down two sides of one wall, like words on a page. In the Neuberger, the wall diagonally bisected an enormous windowless room designed by Philip Johnson in 1974. Kunsthalle Basel is architecturally the exact opposite of the Brutalism of this dark, brown state university. The room in Basel is lit from an enormous skylight, suggesting a form of nineteenth-century enlightenment as opposed to the 1970s imprisonment evoked by the campus of SUNY Purchase. Each room required a definitive slice or two to circumvent the differing institutional powers they both suggest. In other words, I inserted the paintings in an oppositional trajectory; one experienced only with the viewers’ movement—not all at once upon entering the space. The constructed walls blocked the view of the conclusion, as pages in a book do.

Because the majority of my work is silkscreened, I retain the films of every image I make. For Chapter 20, I deployed what this medium unavoidably suggests—reproduction. However, these paintings are not reproductions or second editions, rather they are new works made for a different exhibition context. In some instances I overlap images. Spine, Chapter 20 features roughly six sets of dimensionally interrelated paintings. Interspersed among these new paintings is a selection of small hand-painted works from previous chapters that I refer to as “captions.” These are the only paintings exhibited in the context of this chapter that were borrowed back from previous chapters.
In order to emphasize the difference of these redeployments of past films/images, I painted a thin strip of lines, a spine so to speak, in red, green, and blue, that bisects all the photographically based paintings. This spine not only marks the images as singular to this chapter, but also alludes to the RGB color model used in computer monitors and television screens. RGB is counterintuitive to the subtractive color model (CMYK) that is generally used in silkscreens. Up until quite recently I made the paintings using various combinations of cyan, magenta, yellow, and black to obtain a full color spectrum. However, in these paintings, I restricted the palette to various combinations of red, green, blue, black, and white.

On view in the back room is a selection of paintings I made for Łódź Poem, Chapter 2 in 2004. My primary dialogical source for this series was the correspondences between aspects of the Unist theory that Katarzyna Kobro (1898–1951) upheld and those that Władysław Strzemiński (1893–1952) followed. Beginning in 1999, these artists have continuously informed my practice. I use them as allegorical decoys with which to conceive conceptual/historical scaffolding.

The central image of this chapter was a photo-based silkscreen depicting a mirror image reversed replica of Kobro’s Spatial Composition 2 (1928). I originally fabricated this model in 1999 for another exhibition in Poland. For Chapter 2, I used a color photograph from which two chromatically differing silkscreened paintings were made. I named both paintings Spatial Composition 23.3 Parsecs Away. Parsec is an astronomical unit for measuring the distance of a star to earth. A star whose light was released in 1928 would take 23.3 parsecs to reach earth by 2004. I hand painted “1928” in oil on top of the image in reference to the date of the sculpture depicted in the photograph. Unism, for Kobro, meant fully integrating her objects into both their material and subjective context and, literally, into the realm of architecture and time. This added emphasis on the perceptual and temporal experience of viewing undermined the autonomous objecthood of sculpture. I tried to transplant this idea into painting. Through an acknowledgment of the shifting positions of the viewer (in front of and moving by on to the next painting) within the immediate framing of the exhibition and its immanently larger social contexts, the privileged position of the isolated of picture is destabilized.

In addition to the photo-based silkscreens, I used an optically charged striped painting to represent the second voice in this dialogue. This painting was unfortunately damaged beyond repair. It was the first painting I made to induce an optical burn. It was originally made as a direct reference to Kobro’s husband and key interlocutor, Władysław Strzemiński. I continue to apply his theories about painting, which emphasize sheer opticality. He strove to isolate the painted object into self-contained pictorial flatness in order to withdraw from the subjective.

A painting from The Sun, Chapter 1 depicting the overgrown Jewish graveyard in Łódź was also included in the series. I painted “2000” on top of the image, referencing the date when the photograph was taken, instead of the date of what is depicted in the photograph, as I did in my earlier Spatial Composition painting. In and around these silkscreened paintings I hung four hand-painted “caption” paintings. “Caption” is the name I give to the smallest hand painted works. In this series, two of them explicitly referenced Strzemiński’s drawings of melting figures in the Łódź ghetto that he made during World War Two. Theoretically, these works represent the collapse of many of his Unist convictions.

In 1996 Edward Krasiński made an exhibition in these same upper galleries at the Kunsthalle Basel. He is the ghost whose presence I summon in this last small room.

The exhibition was generously supported by Martin Hatebur.