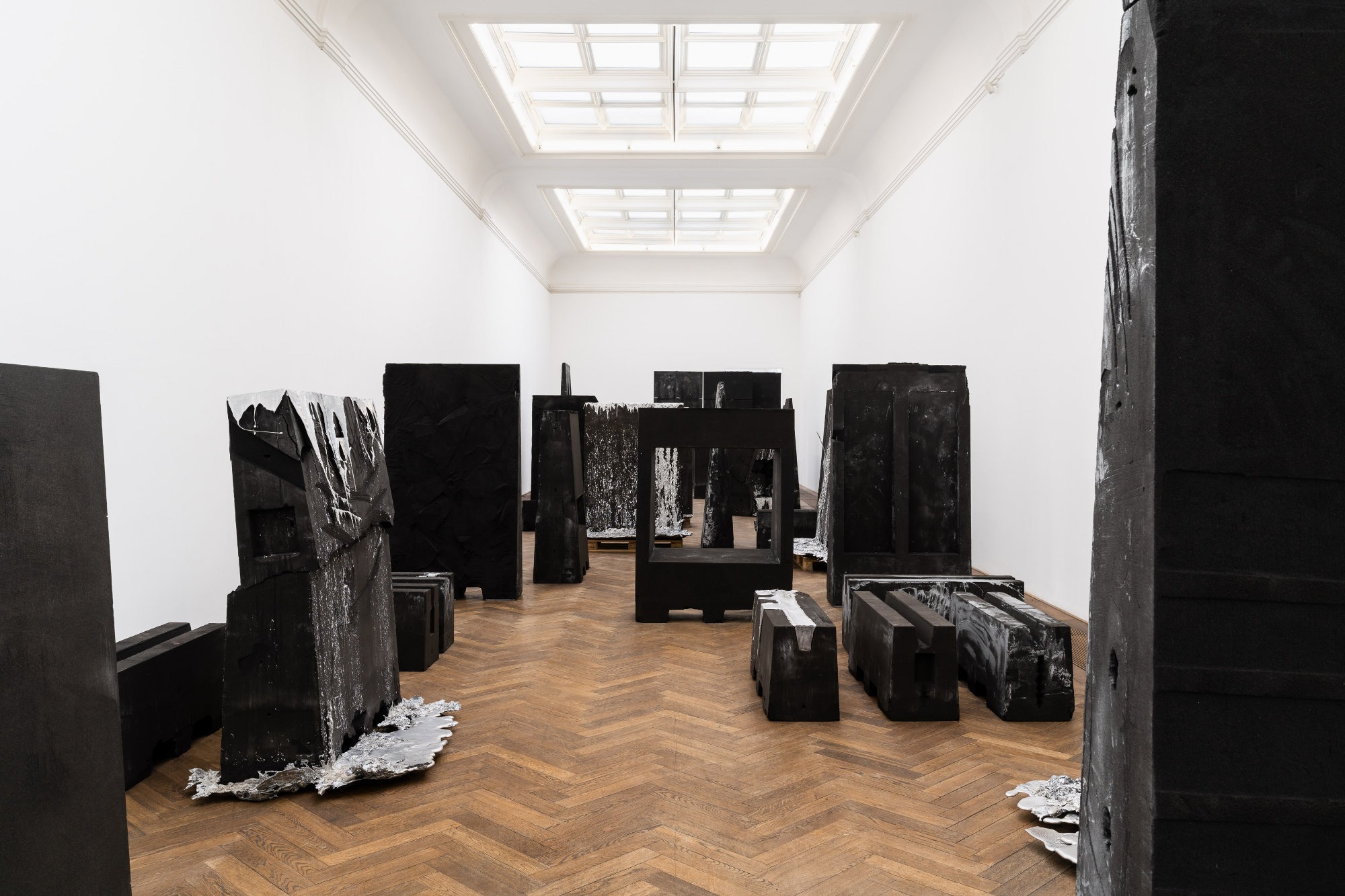 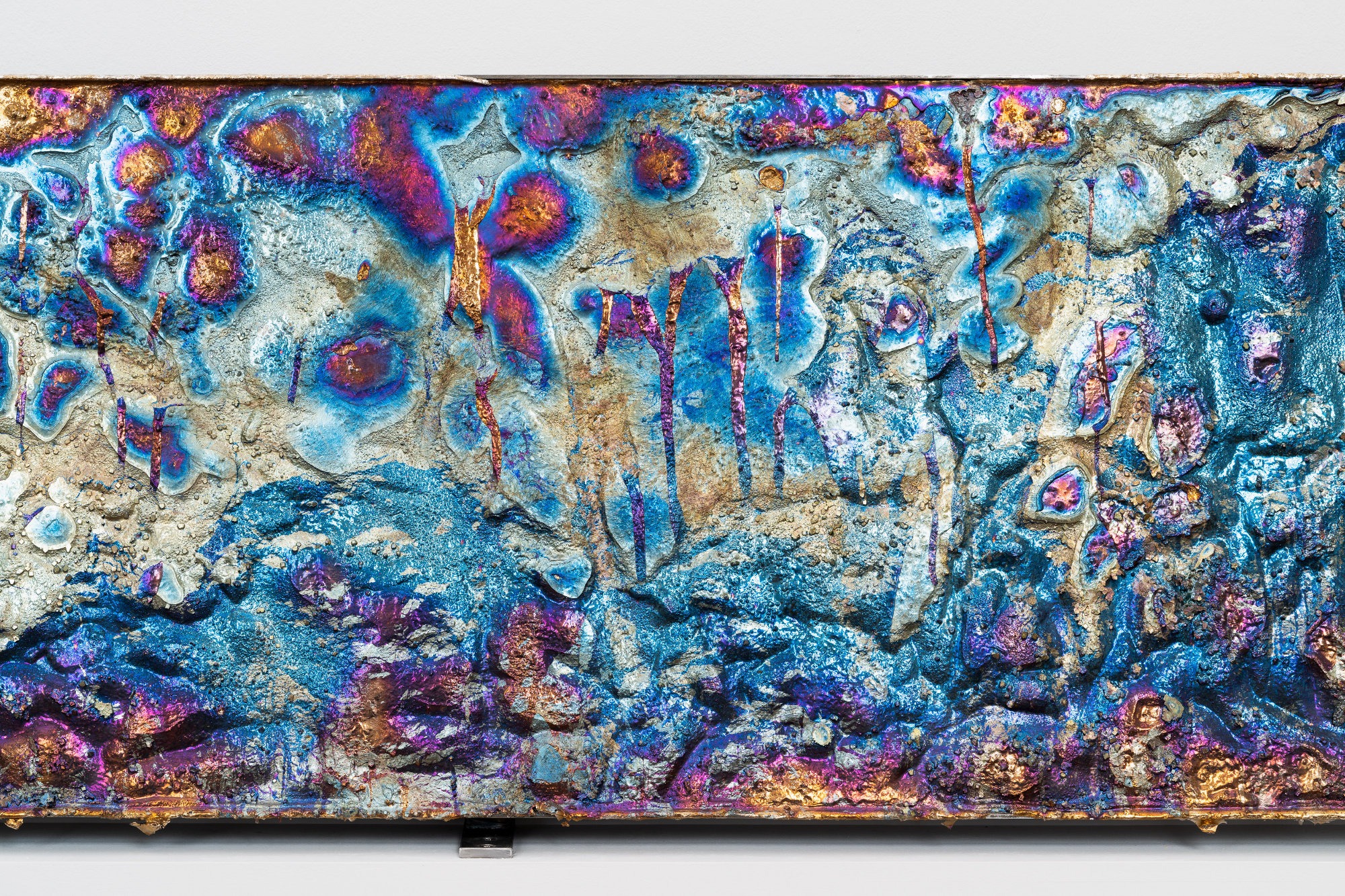 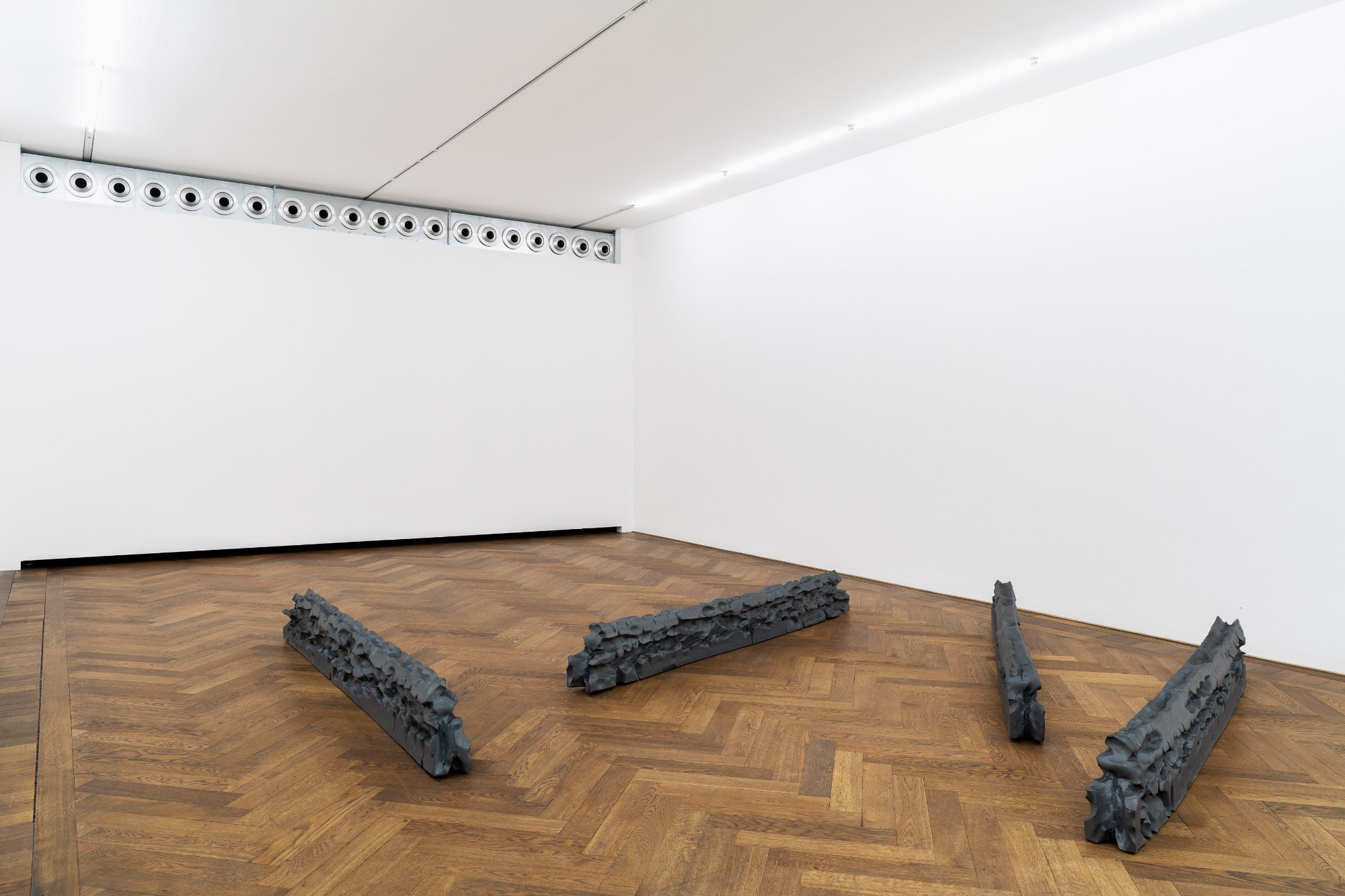 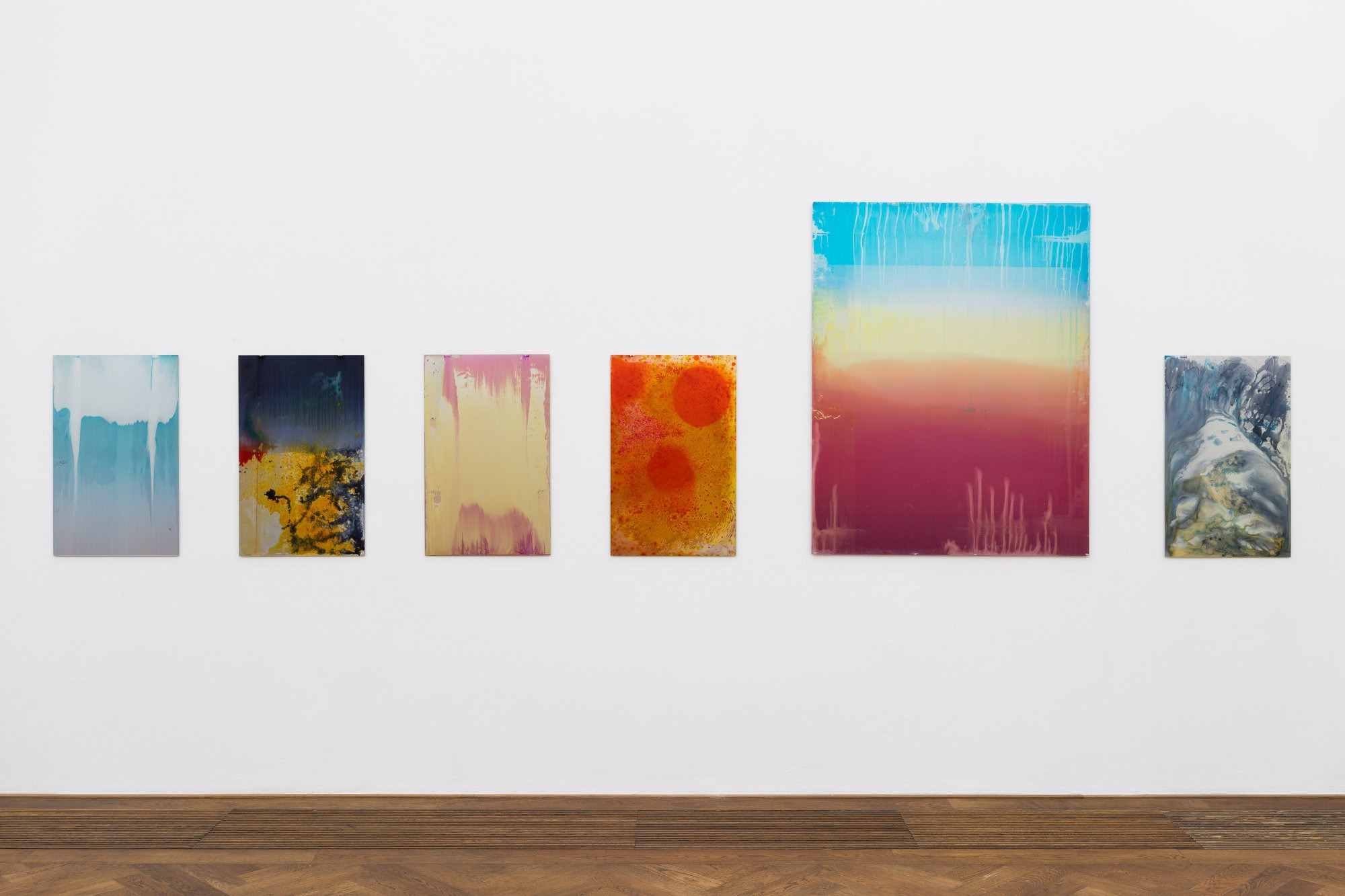 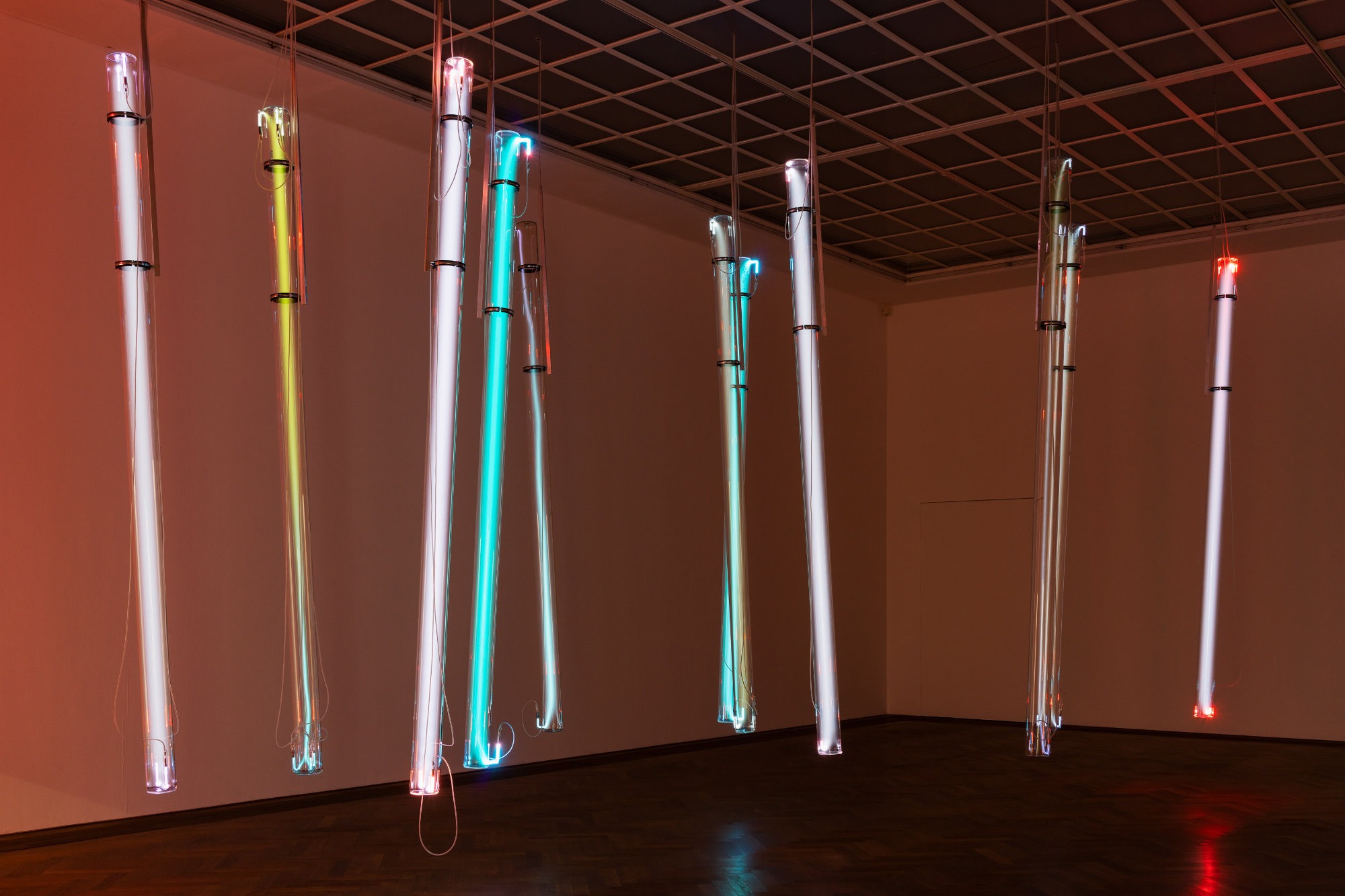 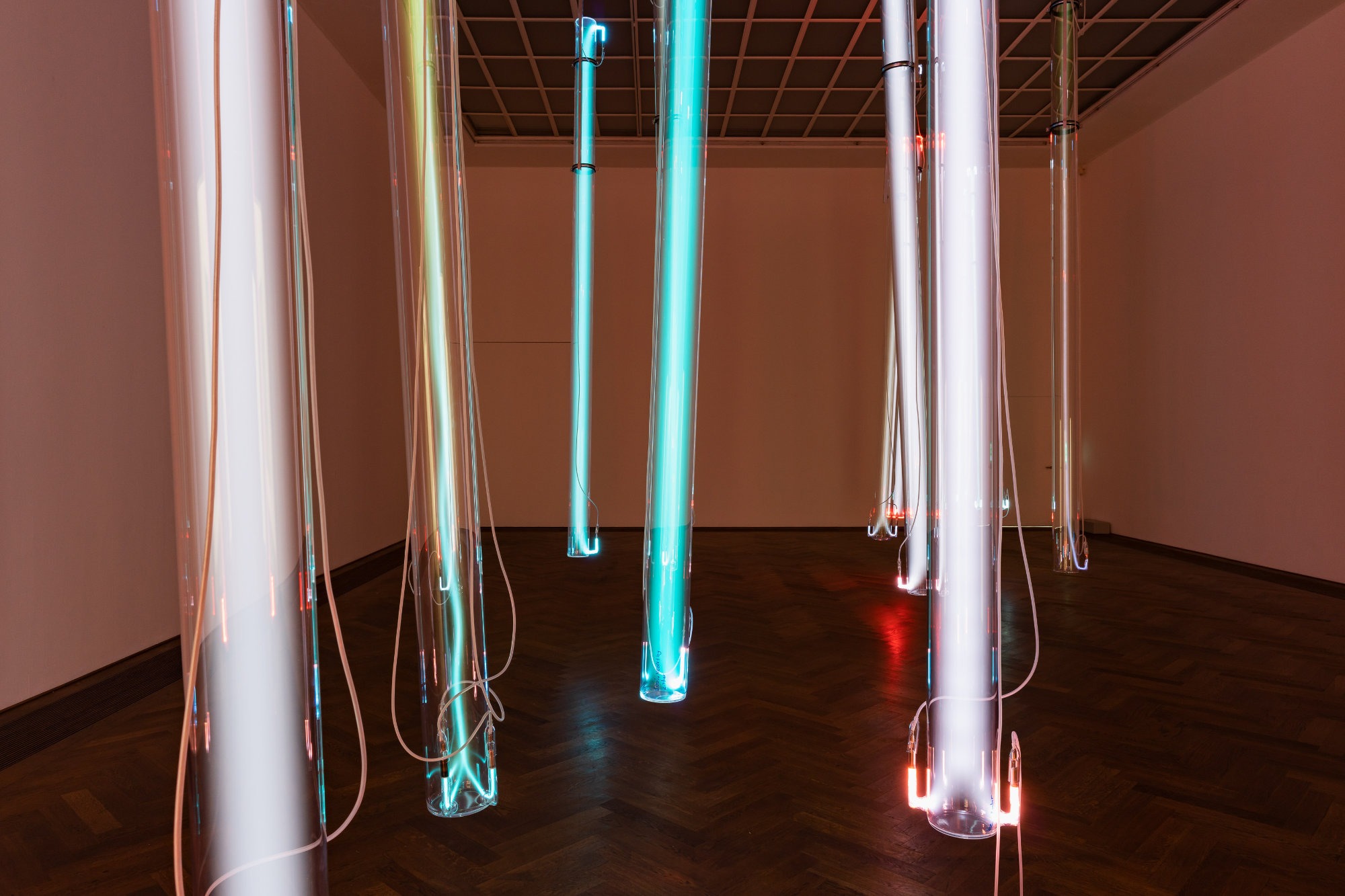 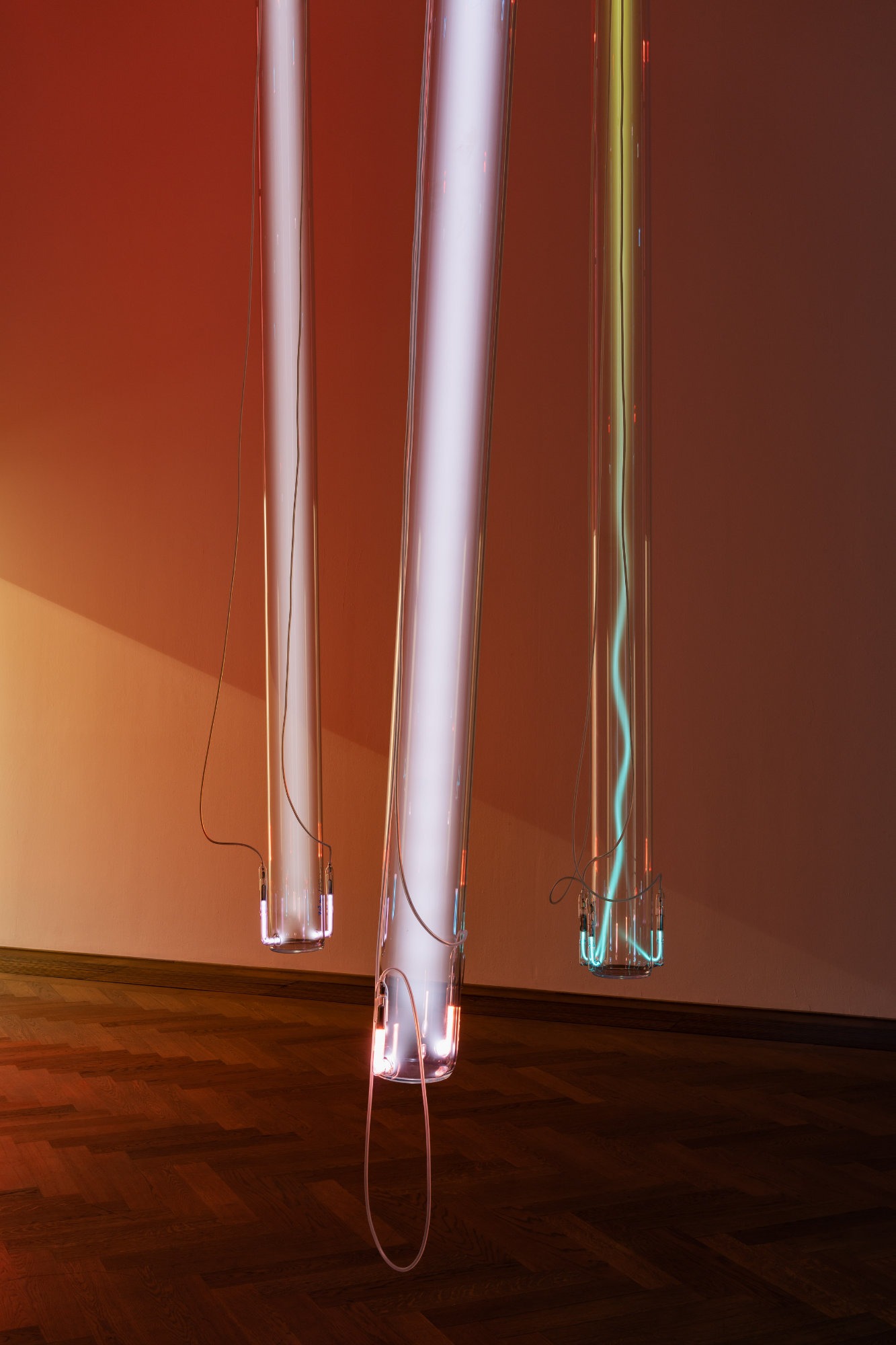 Raphael Hefti, installation view, Salutary Failures, Kunsthalle Basel, 2020, view on Message Not Sent, 2020 (detail). Photo: Gunnar Meier / Kunsthalle Basel
Size, Raphael Hefti would tell you, matters. Not that all of his art is necessarily big, or that he considers monumentality to be superior to the intimacy of small things. But in an age in which nearly everything can be seen on social media—instantaneously, at a single glance, and everywhere, unmoored from its physical site—he believes it to be essential for art to surpass what can easily be captured on a digital screen. And he believes that it is crucial to provoke precisely the sort of wonder and discomfort that the screen cannot convey. He is, you might say, in search of the sublime; he finds it in ordinary phenomena, both natural and industrially- made, and in the sorts of outcomes that can only arise from the efforts of highly skilled craftspeople, impelled by the artist to push materials and techniques to their very limits and, at times, beyond.

The results of this approach can be en- countered in Hefti’s exhibition at Kunsthalle Basel, the largest institutional show of his work to date. It comprises more than 27 tons of black sand pressed into an array of daunting, irregular monoliths (some featuring channels doused with molten aluminum, some bearing lava-like swellings); a swath of 600 kilos of liquefied and then hardened bismuth, glistening like an iridescent panoramic landscape; multiple beams made from the metal alloy X6CrNiTi18-10 subjected— over the course of eight years—to extreme temperature changes that simulate around 5,000 years of natural aging (as an industrial ventilation system circulates the air around both beams and visitors, unsettling viewing conditions); more than a dozen abstract “paintings” on differently sized aluminum sheets produced through a process of semi- controlled corrosion caused by repeated exposure to acid and pigment baths; and 15 four-meter-long glass vials that enclose various noble gases, electrified to flicker spec- trally. Such is a more or less matter-of-fact way to describe the five newly produced and recent bodies of work divided across the spaces of the exhibition Salutary Failures, pulling focus on their numbers: the sheer scale or weight or temporal measure they imply.

While these colossal figures suggest that Hefti is unafraid of the weighty or potentially dangerous, he also reveals himself to be an artist fearless of failure. And one who knows to ask: When is failure not failure, but, in- stead, productive, interesting, even beautiful? This question has been at the heart of his art since he first completed his studies and a related apprenticeship to be an electronics engineer only to go on to study photo- graphy and to reinvent himself as an artist. But, as he well knows, not every failure is worthy of attention. And yet, as someone who has made a lifework of using industrial methods and materials the “wrong” way, Hefti reminds us that the question of failure might be one of the most fundamental to art as such.
There are risks. In the process of his still young career, the artist has subjected himself to extreme heights and endured punishing heat, he once accidentally blew up his car (and as a result was under investigation for years by an anti-terrorism unit), and his hair tempo- rarily fell out due to the substances he was using to produce his early photograms. For a solo show in 2013, he piled more than 25 tons of sand in his then-gallerist’s tiny London space and set in motion a chain re- action that sent an unstoppable flow of 1,600° Celsius molten steel down sand channels in an act that was partly sculptural and partly performative. No one was hurt and the gallery floors held up, but that these pro- cesses remained benign could not have been predicted with certainty. To make his art, and importantly also, to show his art, Hefti probes the limits of the possible, for himself as much as for the institutions who exhibit his projects. (This one being no exception: The weight of some of his works challenges the structural limitations of the historic Kunsthalle Basel building, the electricity coursing through other pieces court a high- voltage risk.)

Still another way to consider his artworks is via their formal qualities, the way they engage with and turn on their head the principles of minimalism, which found beauty in the rigor of geometries and perfection and sheen of industrially-made forms. The attraction of Hefti’s art, conversely, lies in imperfection, in gouged surfaces, in unpredictable effects. Yet, little of the result might look like tradi- tional sculpture or painting, although these are exactly the conventions his work both emulates and responds to (note how his sculptures recall monumental earthworks of the 1960s or how his anodized aluminum panels evoke 1950s abstract expressionism, or how his glass works bring to mind the fluorescent light sculptures of Dan Flavin). And if some of Hefti’s pieces at first glance look rather like construction debris, or, alternately, laboratory experiments, to study these and other works is to see in them the marvels of nature, the irregularity of chance, and the strange and ordinary sublime that the confrontation of materials with pressure or heat or electrification can produce.

“Every material has a social side,” Hefti in- sists. Aluminum, for instance, is extracted from a specific place, using certain tools and traditions and labor, and the exposure of these undergirds his practice. Embodied in each of his objects are the sweat, care, and transfer of knowledge from skilled work- ers to the artist, who underscores how significant are the unusual cooperations that make possible his praxis. If the production processes innate to capitalism are, as we know, founded on dispossession, labor ex- ploitation, and resource extraction, Hefti’s art aims to rebuke their tenets. His work relies on a certain generosity, on curiosity and leaps of faith, on intense collaborations, on un- alienated labor, and often, the material it employs is only temporarily dignified as art: taken from its industrial context, it may return there after exhibition.

Think of that air blowing through the middle of the show, temporarily bringing artificial wind—and with it, lightness and movement, but also a kind of strangeness—into the literal heaviness of his exhibition. Hefti’s search for the sublime may need industry, but is no less extraordinary for it. Similarly, think of the show’s final room, which glows with oversized industrial glass containers suspended from the ceiling like futuristic stalactites. They are alive with a dazzling spectrum gener- ated by electricity shot through the contained gases within to make multi-colored ghostly emanations. Each one of the so-called noble gases (in order of density: helium, neon, argon, krypton, and xenon) to varying degrees circulates freely in our atmosphere, but they are never visible, and in nature will hard- ly look quite like this. Here, Hefti captures them, elevates them, displays them in a slow burn, and renders them a metaphor for his entire process: take elements that exist in the world and make us behold them, showing there is extraordinary potency in a collision of forces—nothing at all might happen, the whole thing might combust, or quite to the contrary, something magical might occur. Hefti, for his part, is courting the latter.

Raphael Hefti was born 1978 in Boudevilliers NE, CH; he lives and works in Zurich, CH.'

A lavishly illustrated monograph, Raphael Hefti, Works, will be published in English and German on the occasion of the exhibition, edited by Fabian Schöneich. Published by Kunsthalle Basel with Lenz in Milan, including contributions by Elena Filipovic, Raphael Hefti, Nora N. Khan, Dieter Roelstraete, Fabian Schöneich, and Carmen Van Pamel, and designed by Maximage, it will be available in November 2020.
www.kunsthallebasel.ch