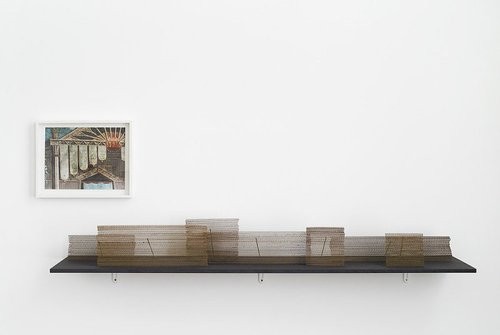 A catalogue will be published at the end of the exhibition.

The exhibition was made possible by private sponsors who wished to remain anonymous.

The exhibition is generously supported by:

Sven Augustijnen (b.1970 in Mechelen, Belgium) lives and works in Brussels. He studied Fine Arts at the Sint-Lukas Hogeschool in Brussels and at the Jan Van Eyck Academie, Maastricht. As a holder of a daad grant, he was in New York in 2000. 2005 he had amongst others the solo exhibition Une femme entreprenante in the Argos - Centre for Art & Media, Brussels. Group exhibitions (selection): 2009 Vérité Exposée, Ernst Museum, Budapest; Stutter, Tate Modern, London / 2008 WEDER ENTWEDER NOCH ODER, Württembergischer Kunstverein, Stuttgart.

Runo Lagomarsino (b. 1977 in Lund, Sweden) lives and works in Malmö. He studied at Valand Academy of Fine Arts, Göteburg and graduated at Malmö Art Academy in 2003. Solo exhibitions (selection): 2009 Las Casas Is Not A Home, Mummery+Schnelle, London / 2007 Those who control the past command the future - those who command the future conquer the past, Overgarden, Copenhagen / 2006 This is no time for saluting flags, Elastic, Malmö. Group exhibitions (selection): 2009 2da Trienal Poli / Gráfica de San Juan: América Latina y el Caribe San Juan; THIS IS NOT AMERICA, El Descanso del Guerrero, San Juan.

Anna Niesterowicz (b. 1974 in Warsaw, Poland) lives and works in Warsaw. She got her MA at the Academy of Fine Art in Warsaw in the class of Professor Grzegorz Kowalski. In 2003 she stayed in Basel as a guest artist in the frame of iaab (international exchange and studio program basel). Solo exhibitions (selection): 2008 Art in Cinema, Fundacja No Local, Kino pod Baranami, Krakau / 2007 Samowzór/Autoform, Galerie Jesco von Puttkamer, Berlin / 2006 Hanba/Shame, Foksal Gallery Foundation, Warsaw. Group exhibitions (selection): 2009 1989 - 2009. Twenty years after, MOYA, Wien / 2008 Bucharest Biennale, Rumania. Anna Niesterowicz produced in collaboratin with Łukasz Gutt several films amongst others The Minstrel Show, 2009, that is on display in Kunsthalle Basel.

Łukasz Gutt (b. 1980 in Warsaw, Poland) lives and works in Warsaw. He studied film at the Cameraimage Film School in Torun, Poland as well as at the Faculty of Radio and Television at the Silesian University in Katowice, Poland. He is a producer of different projects and documentaries such as Scrap Odyssey, 2009, and with Anna Niesterowicz he made the films Hair, 2008 and Hanba/Shame, 2006.

Corin Sworn (b. 1977 in London, England) grew up in Vancouver, Canada. She currently lives and works in Glasgow. She studied at Central St. Martins College, London, at the Emily Carr Institute of Arts and Design, Vancouver, and she will complete her Master at Glasgow School of Art in 2010. Solo exhibitions (selection): 2008 The Wild Ones Are So Tame Now, ZieherSmith Gallery, New York; Back in 5: Accessing the Backstory, Blanket Gallery, Vancouver / 2006 Adventure Playground Or Gallery, Vancouver. Group exhibitions (selection): 2009 EASTInternational, White Columns, New York; Love Me Tender, Kunstverein Wolfsburg.
www.kunsthallebasel.ch