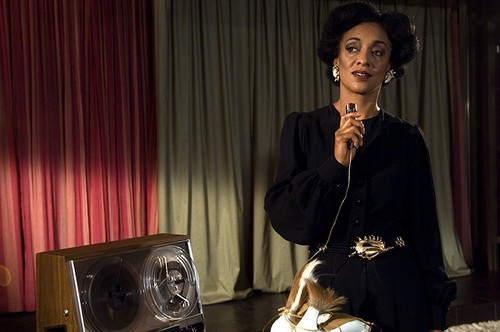 ROOMS LOOK BACK brings together three international artists who are concerned with the representation of different concepts of space in the medium of film. In the process, they explore above all the psychological and social connotations of interiors and their architecture. The focus of the exhibition is on historical and current spaces as places where alternative or fictional narratives can be constructed. Furthermore, presented in sequence under the title Insert three other artists take positions on the exhibition using other media.
Rosa Barba (b. 1972, Italy), Ursula Mayer (b. 1970, Austria), and Margaret Salmon (b. 1975, USA) grapple with the perception of interior spaces and their effects on viewers. The possibility to work in film with different levels of time and changing perspectives in and on architecture reinforces the narrative potential of the relations between subjects and objects in space. Setting out from the art historian and philosopher Georges Didi-Huberman’s formulation that human vision is shaped by the perception of tangible, palpable bodies (of volume and interiors) and hence closely connected to emotional, internalized memories, bodies and objects organize the structure of a space. Rooms therefore have ability to look back at us by constantly narrating their own past as well as possible imagined events that could have taken place in them. All the cinematic works in the exhibition thematize various directions of gazing within spaces and question the installation of film in the specific exhibition space, which is extended by means of narrations using images, text, and sound.
In a series of individual presentations, the artists are presenting older and recent works in the exhibition spaces on the ground floor of the Kunsthalle Basel. Ursula Mayer’s films deal with complex relationships between the camera and the architectural space and cause the protagonists and buildings to interact closely. In Interiors (2006), for example, two women walk through the rooms of a London townhouse from the 1930s without ever meeting. Mayer creates narrative structures that work with the figures’ gazes, touches, and gestures in space. In the exhibition, the artist is presenting both older works and a new film that presents a fictive meeting of the three avant-garde artists Meret Oppenheim, Dora Maar, and Josephine Baker in a modernist glass house. Whereas Mayer fictionalizes historically significant spaces, Margaret Salmon documents people in their domestic environments. The films, shot on 16 mm and Super 8 film, capture individual portraits that also reflect on social conditions, such as the film Peggy (2003), which shows an old woman doing her daily chores in her home. For her new film, Salmon visited a family in their apartment in New Orleans and documented their living situation after the catastrophe of Hurricane Katrina. In her film installations, Rosa Barba works with superimpositions of images, language, and music and creates hypothetical and utopian descriptions of buildings and landscapes that are referring to science fiction literature. Her 35 mm film projection They Shine (2007) shows images of a solar power plant in the Mojave Desert in California (USA): in a timeless choreography of images, a field of moving, blinking solar cells is seen, accompanied by a male voice that describes the futuristic-looking architecture in a suggestive commentary.
Throughout the exhibition, Davide Cascio (b. 1976, Switzerland), Swantje Hielscher (b. 1980, Germany), and Manuela Leinhoß (b. 1973, Germany) will be presenting their works as Inserts in the two central spaces on the ground floor. “Inserted” one after the other, the projects extend and contrast with the exhibition’s theme at the point of intersection between the historical part of the Kunsthalle building and the “white cube” spaces of the adjoining rooms. Sculpture, object, drawing, and collage result in new dialogues and configurations between the rooms.
Starting out from different spatial conceptions, Davide Cascio, Swantje Hielscher, and Manuela Leinhoß turn the exhibition space into a system of reference in which the individual components of the installation setting enter into an intimate connection. The projects create concentrated spaces for thinking, in which references to art and architectural theory are taken up, new readings and surveys of the existing spatial structures are offered, and changing perspectives on the space, the object, and the viewer are explored.
www.kunsthallebasel.ch