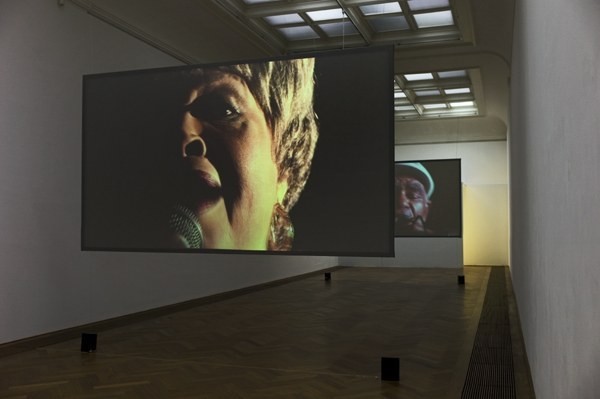 One of the sculptures in the Winter Line exhibition by the two Scottish artists Ross Birrell and David Harding is called The Hand of Paolo Virno (2011). Made by Ross Birrell during a performance, it is a cast of the right hand of Italian phi-losopher Paolo Virno. In his book A Grammar of The Multitude (2004), Virno discusses the concept of “immaterial labour”. The hand hardly springs to mind as a metaphor in this context; indeed, it seems to represent the very opposite when we think of the physical tasks we perform with our hands. But if we see it as the hand of the philosopher, poet or composer, who writes and in so doing records something immaterial, and as the hand of the musician, who uses it to play his instrument and thereby enables us to experience a music that we cannot physically touch, or as the hand of the artist, who produces a material work on the basis of an idea, The Hand of Paolo Virno indeed becomes analogous with this immaterial form of labour.

While this cast of a hand conveys the reality of the person through their direct imprint in the material, it communicates – even more strongly – the presence of an idea in an object. The relationship between idea and object thematized in this object applies to all the works in the show, from the sculptures of bears, the photographs, the films, the pieces of writing and the ceiling light works overhead. For they all take up conditions, facts and individuals from the past and the present. Starting from these facts, Ross Birrell and David Harding develop narratives for which their various media serve as visual containers and as symbolic images. On the basis of these narratives, the artists point out relationships between society and history, between thought and language, and between art, music and literature.

The collaboration between Ross Birrell and David Harding began in 2005 with the film Port Bou: 18 Fragments for Walter Benjamin which premiered at Kunsthalle Basel in 2006. Winter Line brings together works that take up and offer variations upon Birrell’s and Harding’s individual interests and earlier works, which are here pursued in dialogue with each other and with the context of the Kunsthalle Basel venue.

Ross Birrell is showing his film Sonata (2013) within an exhibition architecture that references the image of the “fold” used by Gilles Deleuze to describe the philosophy of Gottfried Wilhelm Leibniz in relationship to the Baroque epoch. This image of the “fold” can be understood within the exhibition as a thought form and as a way of working:

“The fold winds, grows out of itself and, as fold builds upon fold, forms a moving complexity that is not static but is constant changing. The fold bends, folds up (Latin: com-plicare), but can also un-fold (Latin:ex-plicare); it can pass from a Introduction state of growth to a state of diminution, whereby it retains its diversity and its inherent possibility of creating plurality. In view of these properties, the image of the fold seems to best represent the interweaving and multiform nature of the Baroque power of expression. But this image also plays (...) a central role in our explanation of the world and in the development of contemporary thought.” (1)

In Winter Line the “fold” links the various narratives, draws their motifs together and simultaneously develops them further as individual narrative strands. The artists chart a kind of genealogy of their themes, whose complex history they incorporate into their works as necessary context. Hence the works in Winter Line are not orchestrated as a static formation: the viewer moves forwards and back and follows the narratives to different places and to diff erent moments in history.

In 1985 David Harding founded the Department of Environmental Art at the Glasgow School of Art. Harding’s focus upon art for public spaces caused him to move away from a medium-oriented concept of the artwork and to view the context of the artwork as a component of equal if not greater importance. The media become possibilities and strategies depending on the specific context. (2)

The multi-layered context in which the artists embed their works is heard in the title Winter Line. In the English-speaking sphere, the Winter Line is known as the name of a military front in the Second World War. It ran across Italy south of Rome and included the German fortifications at Monte Cassino. During the Battle of Monte Cassino in 1944, the Polish units fighting on the Allied side were aided by Wojtek, a Syrian brown bear who had become their mascot. At the end of the war Wojtek was given to Edinburgh Zoo where David Harding saw him for the first time at the end of the 1940s. In 1973 he created a sculpture of Wojtek, which was later presented to the Polish Institute in London. The artists offer a memorial to this same bear in Winter Line, albeit not in the form of a classic commemorative sculpture on a plinth with an inscription, but as two life-size bears, Ursus Arctos Syriacus 1 and 2 (2014), placed directly on the ground.

Winter Line stands not just for the historical front but for a place of confrontation in general: a line that, as a result of conflict, constantly moves, shifts and must be renegotiated. In the exhibition, the films Duet (2012) and Guantanamera (2010), which respectively make reference to the conflict between Israel and Palestine and between the USA and Cuba, employ music to point towards ideological antagonisms. The film Sonata (2013) and the mural piece To Music (2014) trace the theme of meeting at a metaphorical level in literature, and thereby asks questions about the possibilities of translation and consequently of understanding through the medium of language.

The exhibition title also invokes associations with Franz Schubert’s Winterreise (1827), a composition that can be read politically and which, in its theme of a journey, contains a motif that surfaces repeatedly in the show and which, for the artists, is frequently part of the work process. It is taken up in the photographs Winter in Marseille, 46, rue de Forbin (2014) and Voices in the Villa Lynwood, Nice (2014) as the theme of emigration. Following the German invasion of France, Church of Scotland minister Reverend Dr. Donald Currie Caskie helped countless Allied soldiers and civilians facing persecution on political grounds to escape the country, funneling them along the same route to Spain by which philosopher and literary critic Walter Benjamin reached Port Bou in 1940. Emigration and political persecution are also the biographical parallels in the lives of the four composers, exponents of new music, acknowledged by the artists in their colours for the skylights. These give the whole exhibition a framework. Like the films, they are a reference to the political and sociological backgrounds to the composition, performance and reception of music. They represent the visual transposition of a musical notation.

In music, the score of a piece is not the piece per se, but simply the record that allows it to be realised in sound. (3) Birrell and Harding combine various narratives – recorded in history books, art works, poems, architecture and other artefacts – into a sort of polyphonic notation that creates relationships and receives its “performance” in the different works.