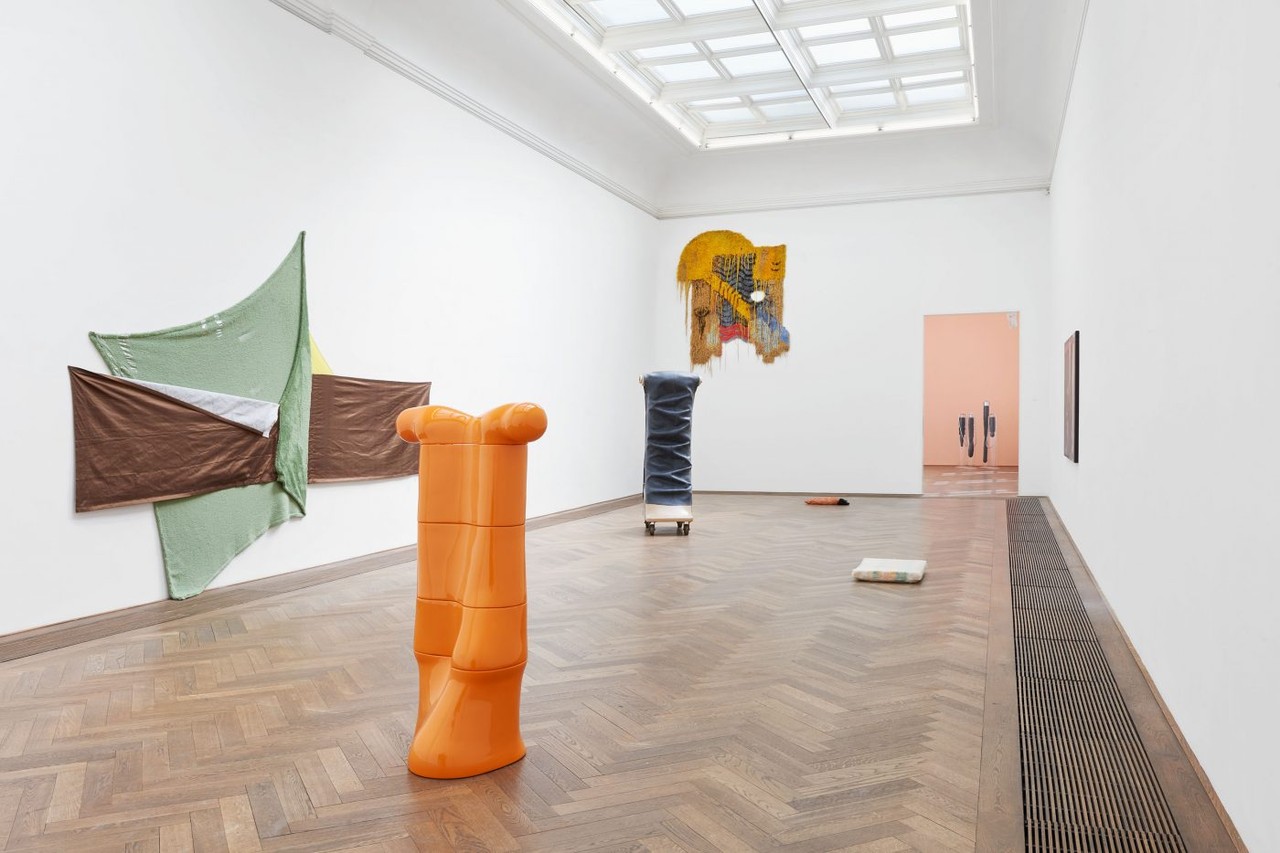 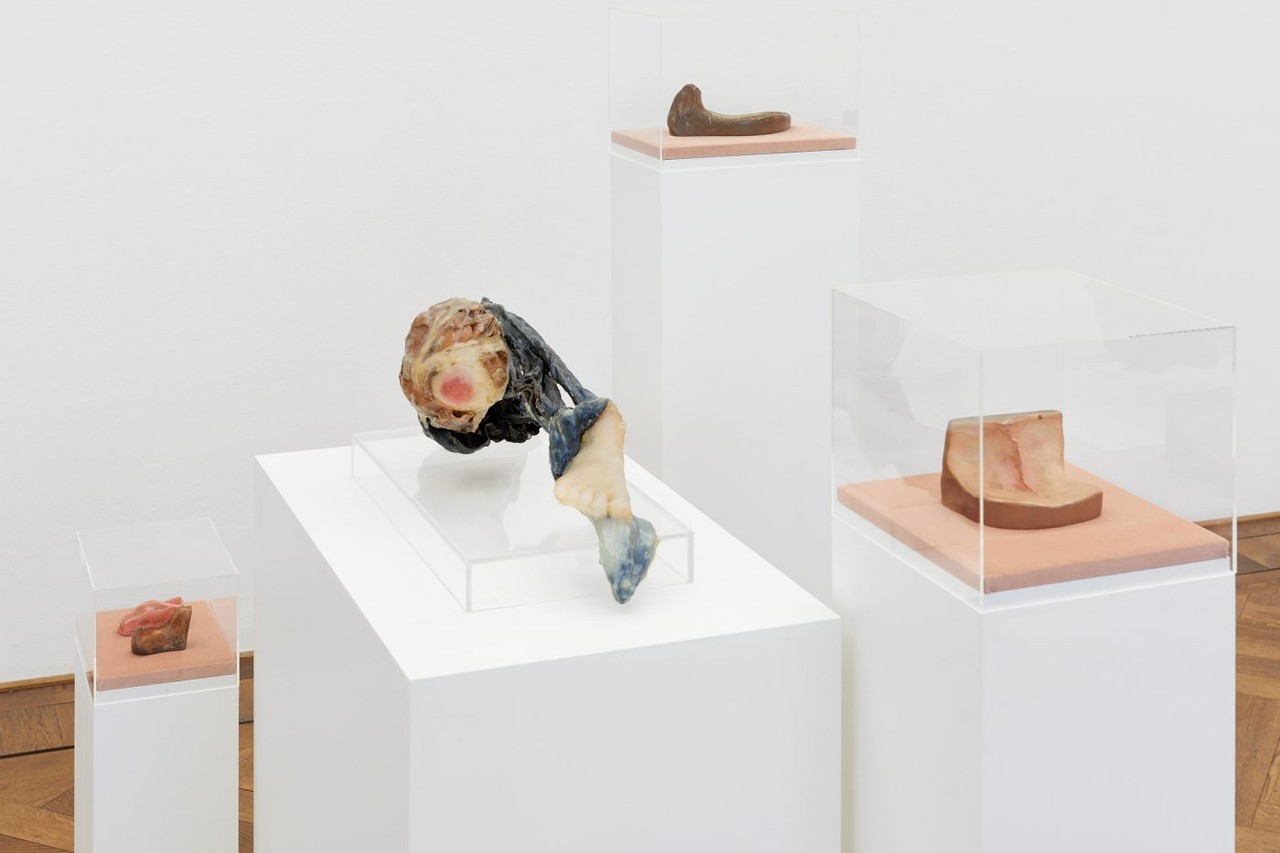 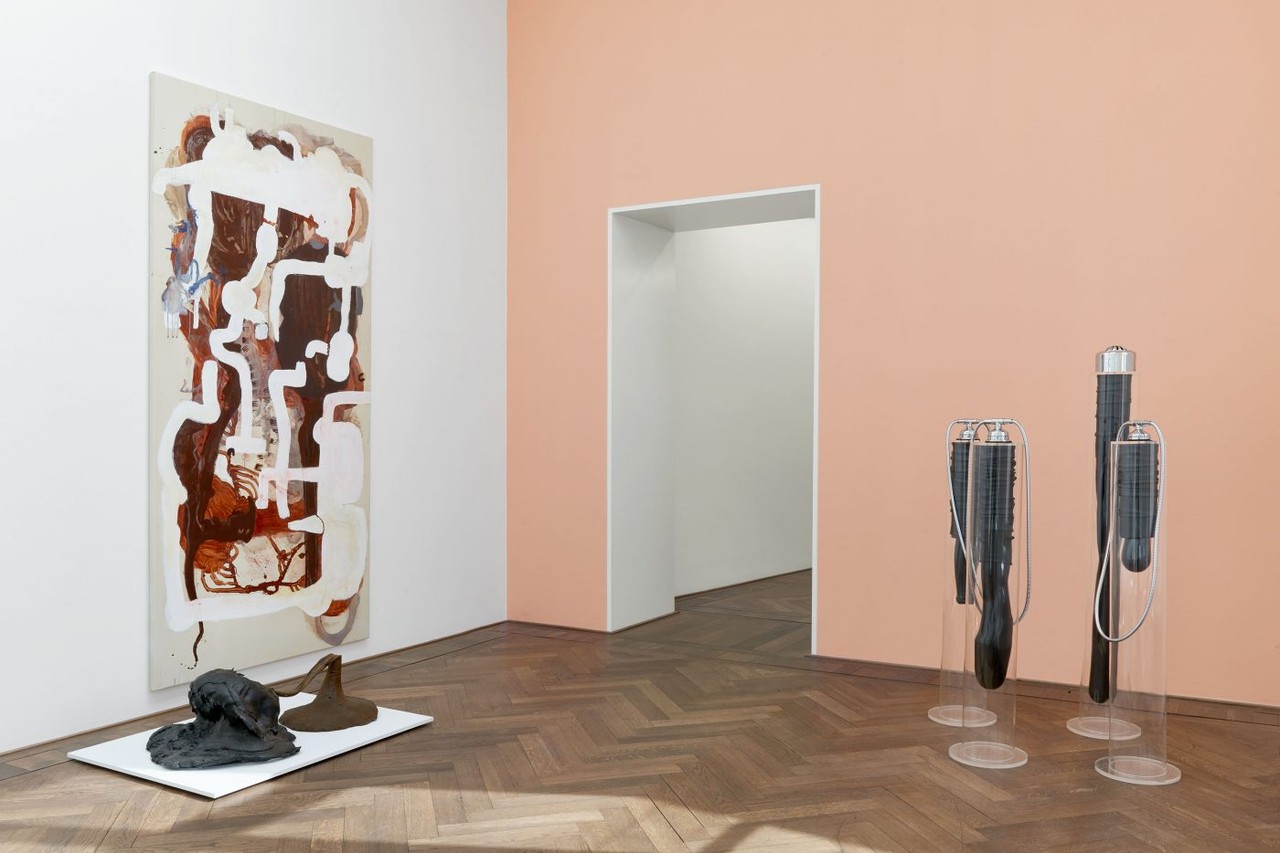 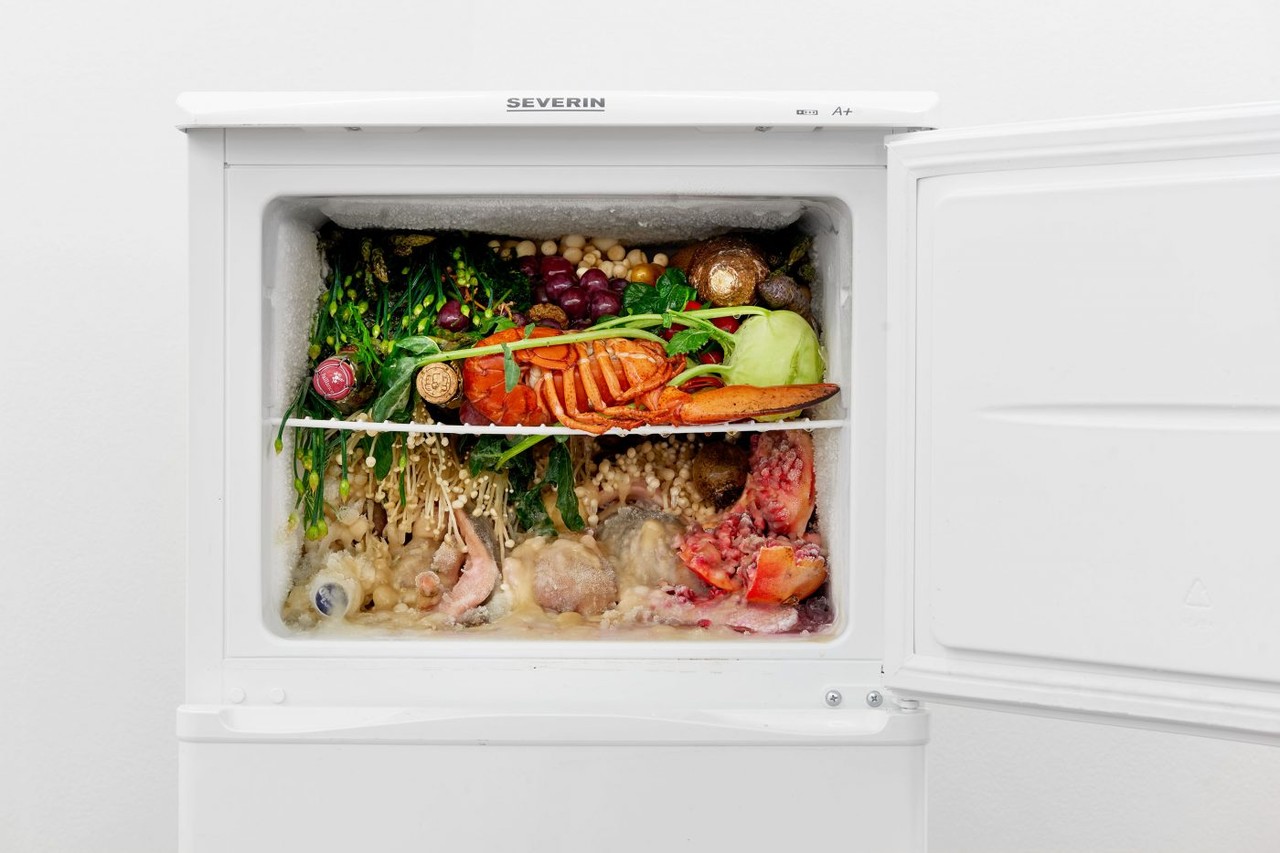 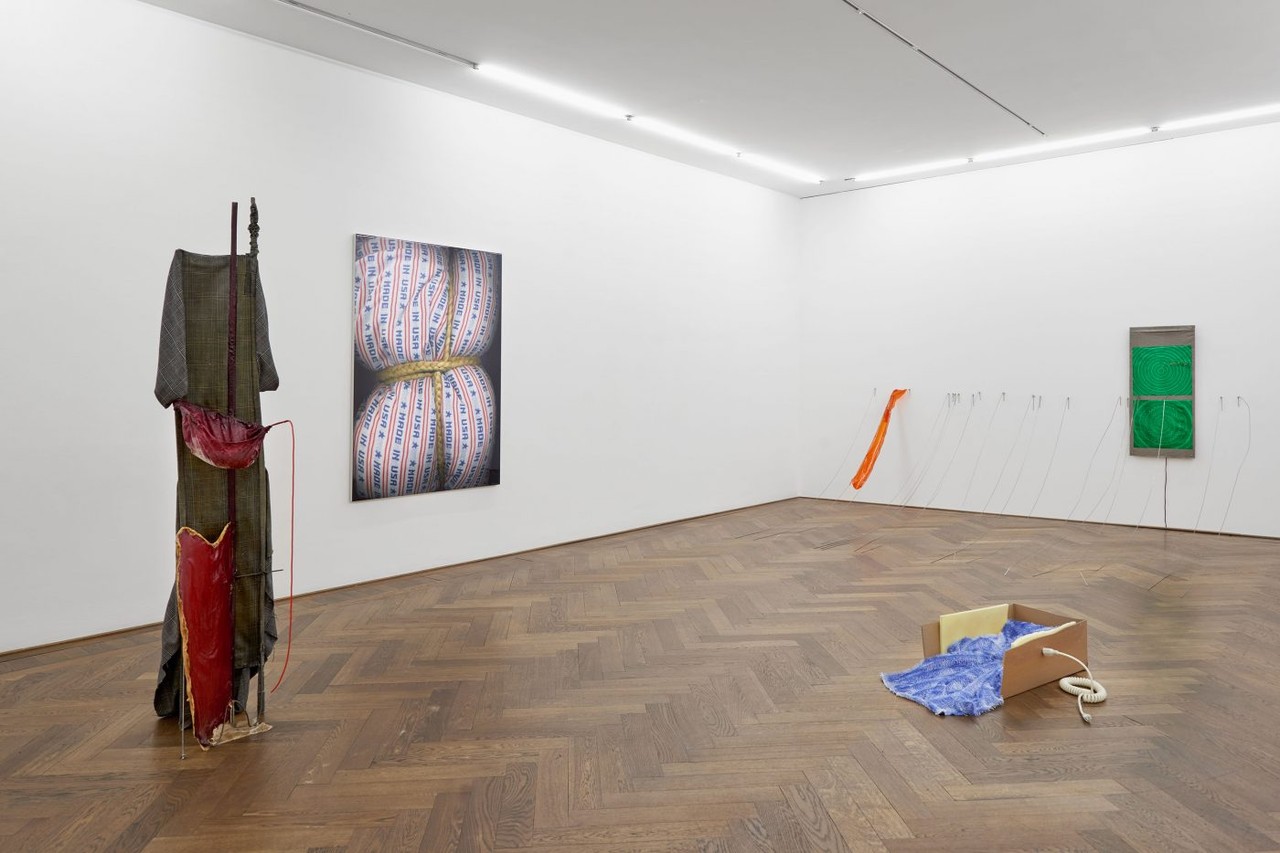 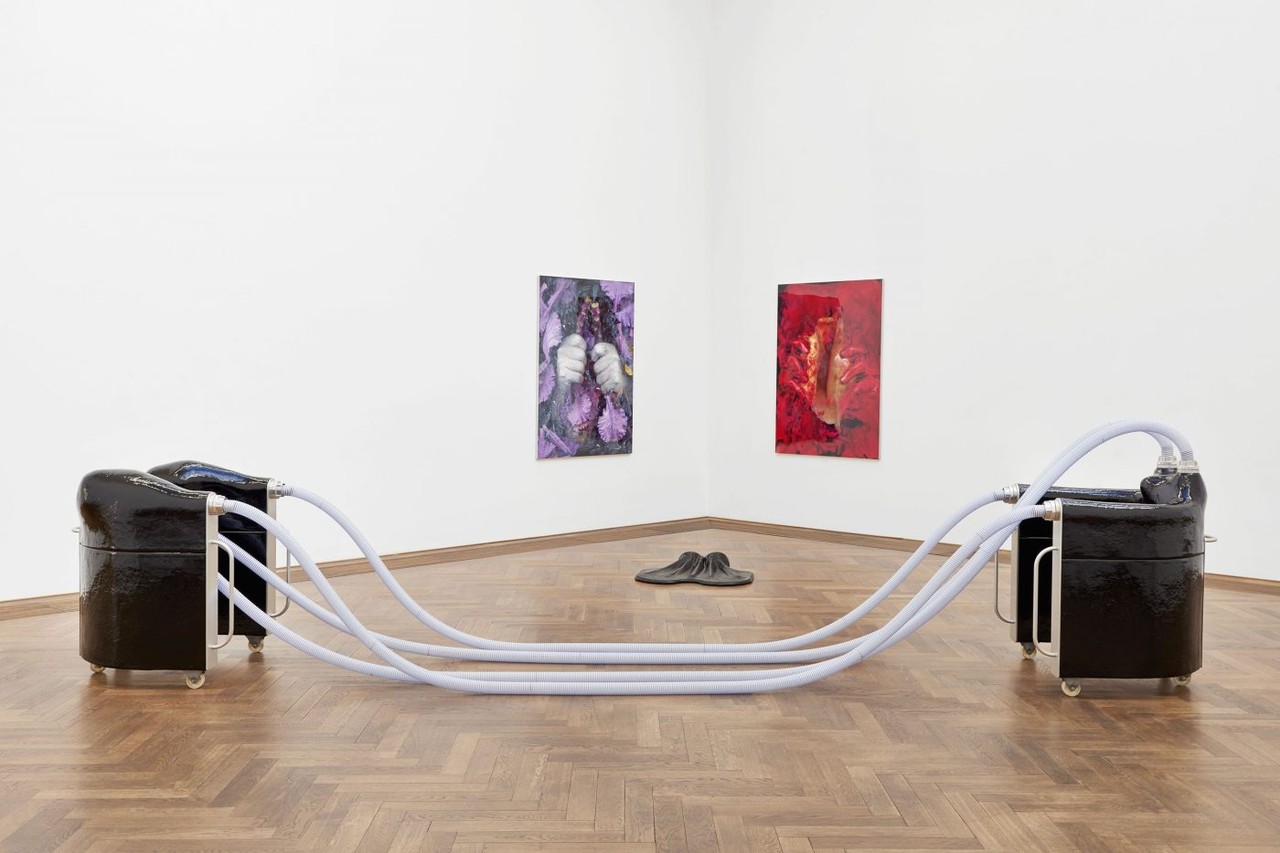 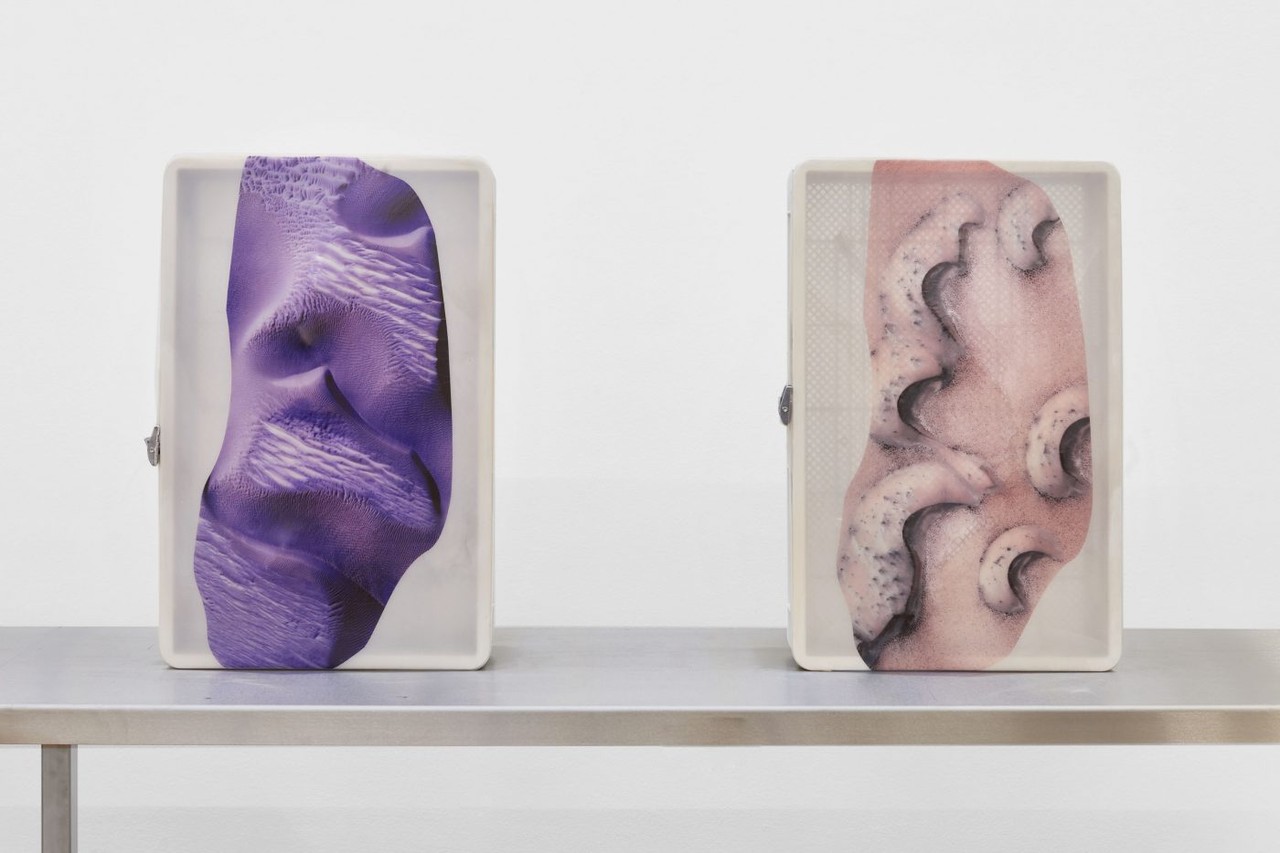 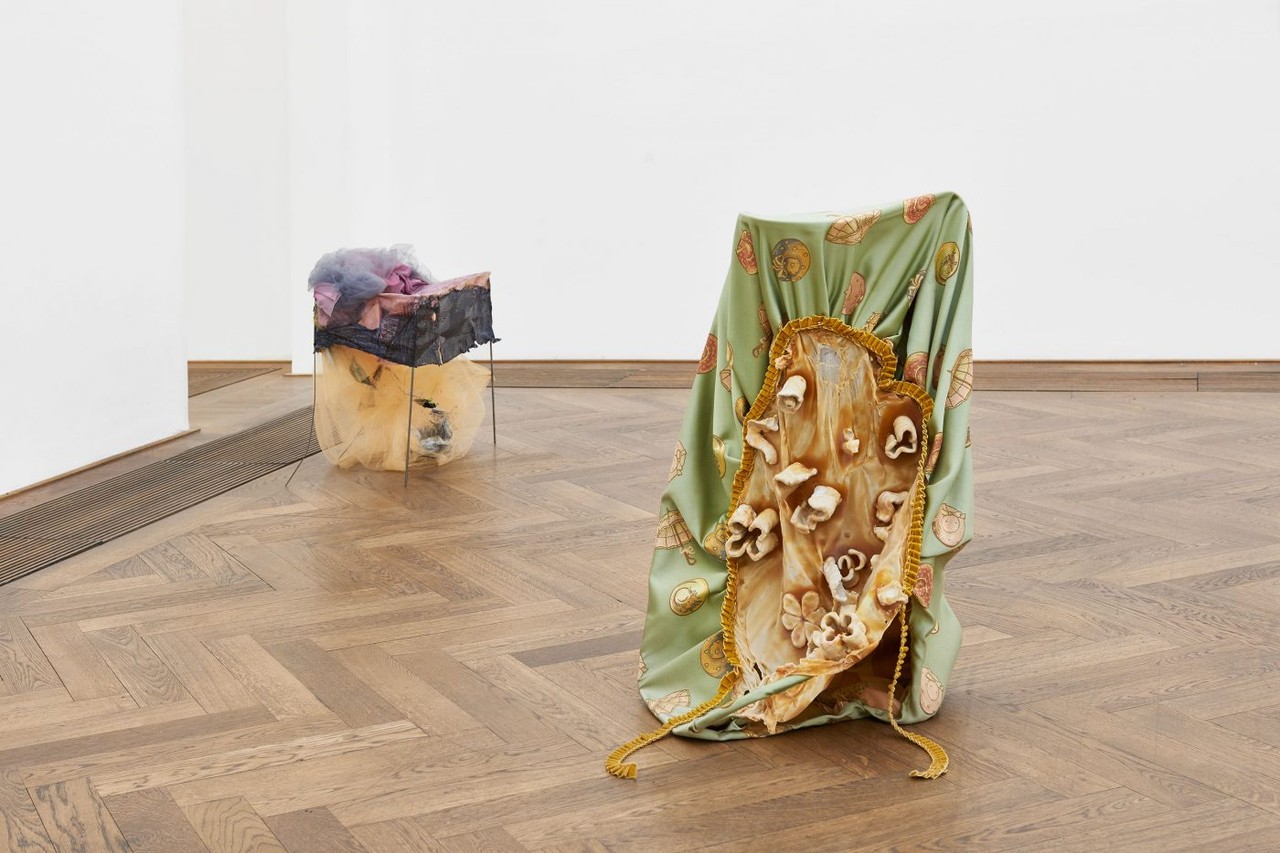 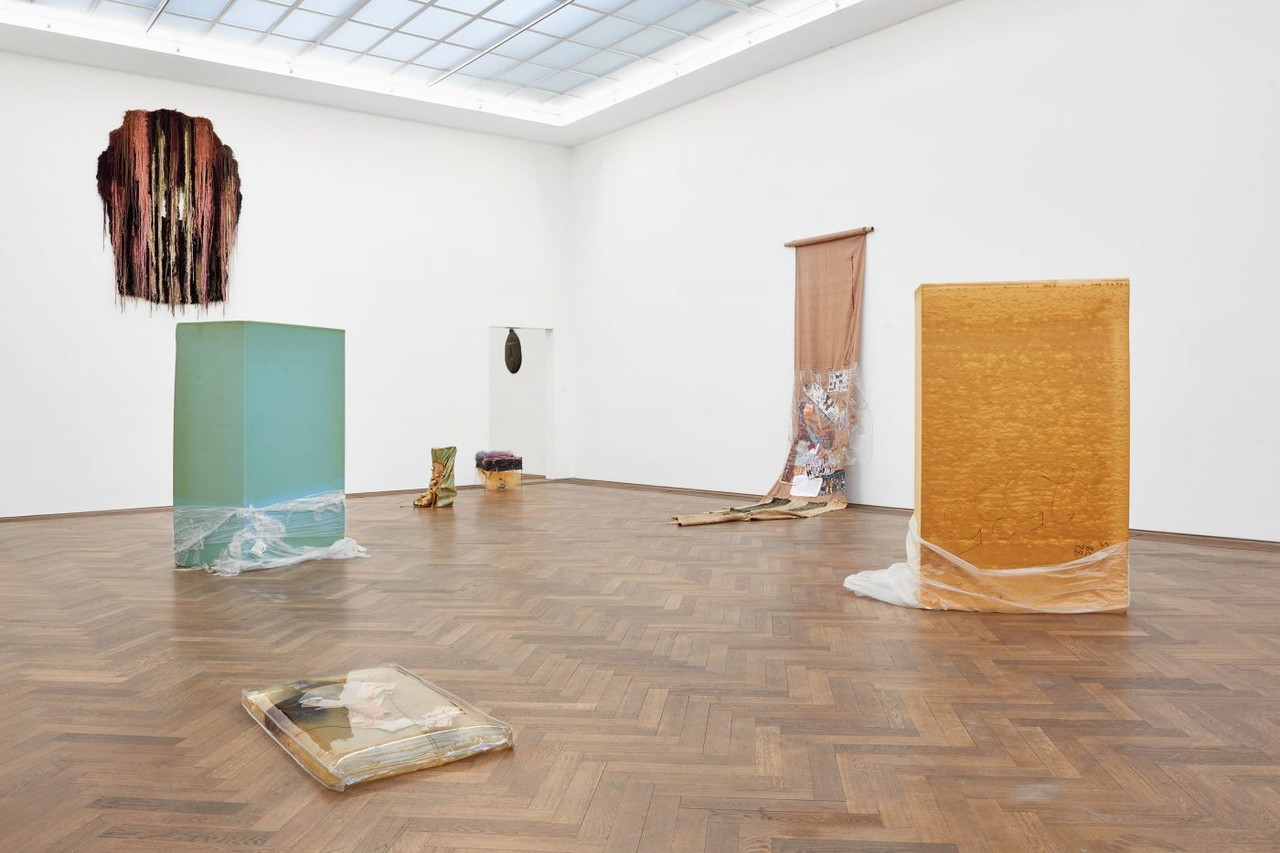 You are greeted by gleaming technoid forms of vaguely human dimensions. Joachim Bandau’s too long overlooked, but utterly contemporary-seeming sculptures of the 1960s and 1970s appear to be functional (note their quasi-industrial finishes, their wheels, han- dles, tubes, and protective rubber casings), yet they are resolutely without purpose. They stand like alien devices, weirdly sensual and creaturely. Nearby, a recent composition involving a thrift store blanket and textile scraps by N. Mack hangs limply; further into the exhibition, other examples of his textile collages are affixed to a curtain railing or swoon onto the floor. Without fixed shape or form and re- leased from the strict geometry of a stretched canvas, Mack’s sewn and arranged material remnants are marked by their kinship to com- modities and popular culture: street style, Prince, greasy takeout food, a Harlem dog hos- pital advert, et cetera.

You sense that these works engage a history of painting, just as Caroline Achaintre’s handtufted rugs do, the latter even more pro- nouncedly engaging with domesticity, with “women’s work,” with a dirtiness (of the floors they allude to), and exhibiting a flaccidity that is neither genteel nor heroic. A yet different engagement with the history of painting is that of Michaela Eichwald, whose works feature abstract traces. Those gestural marks stick to cheap imitation leather on which the paint doesn’t dry as it would on canvas; it remains tacky for a long time, dust invariably clinging to the gummy surface. All of these works’ insistent materiality plays with that most auratic of art history’s mediums, rendering it less noble—even debased somehow.
role as both things in themselves and pream- bles to another artwork beyond them.

They encircle a 1971 sculpture by Szapocznikow in polyester resin cast from body parts (a foot, a breast), amalgamated with the ordinary stuff of her studio (pantyhose, newspaper). The Polish sculptor described her works from the late 1960s and early 1970s as nothing more than “awkward objects,” which might have been another way of calling them ungestalt. Haunting, visceral, sensual, endlessly uncanny: Szapocznikow’s body casts, lugubrious forms, and accretions of matter using unorthodox materials, methods, and forms act, much as Duchamp’s works here do, as harbingers of the absent but nevertheless disquieting (real) body at the heart of the presentation. Populating this exhibition are exquisitely ungainly, recalcitrant works that, each in their own way, refuse to be docile, stable, wellbalanced. There is something obscene, unset- tling, or (quite literally) rotten about them, even when they might also be described as inexplicably attractive, even elegant. Some- times the artworks’ resistance is material: as with Olga Balema’s ever so slightly quivering, mechanized and mysterious, or viscous and dripping, always odd sculptural forms; Lucie Stahl’s resin-coated photographs that depict hands grasping various dirty industrial or natu- ral elements; the artistic duo Pakui Hardware’s industrial shelves and trays with archival NASA images of Mars imprinted on silicone so that they look like diseased skin; or Park McArthur’s upright, pocked, partially plastic-draped, scribbled-upon foam pieces that stand like strange sentinels or anti-monuments in the final room of the exhibition.

Sometimes the artworks’ resistance is more perceptual than material, as with Trisha Donnelly’s two filmic works, one an abstract moving image, the other a still projected image, each hovering somewhere between analog and digital, and each appearing at once present and effaced, almost apparitional. Or Adrián Villar Rojas’s comestibles slowly rotting in a crammed refrigerator-freezer. His encased display of domestic entropy— neither entirely solid nor liquid, increasingly oozing the more the audience opens its door to take a look—creates not only a slippage between luxury commodities (lobsters, cham- pagne, scallops, pomegranates) and disgusting waste, but also fills the air of the gallery with its nasty, olfactive signature. And the vaunted tradition of sculpture, for its part, is made irrepressibly strange (Freud had a name for it, unheimlich, or uncanny) by Liz Magor’s Sleepers. These works are variations on a theme: a doll wrapped in a rubberized silicone cast of a baby blanket, “swaddled” so only the uppermost part of its forehead and hair spill out. “Creepy” is per- haps the best word to describe them. They lie, casually but eerily, on the floor and in your way (indeed, much of Magor’s materially confounding oeuvre operates this way, and pieces are scattered throughout the show). So opens the exhibition. There is no easy way to account for a show that goes by the title Ungestalt. The German term signifies neither exactly the English “formlessness” nor the French informe, yet shares something of their essence. Indeed, the rather arcane word conveys wildly different senses, which seems perfectly fitting for the present circumstance. It is a description of something that struggles against delineation— indeed, against the clean, articulated wholeness suggested by Gestalt. It also describes some- thing clumsy and misshapen, even monstrous- ly so. Under these rubrics, amorphous, gooey, abject, and fugitive emanations might be described as ungestalt. Perhaps something that both is a form, and actively undoes that form, comes closest to embodying a term that itself escapes capture. But how might we ap- prehend this notion not only materially, but also perceptually and conceptually? And how might thinking about it offer a vehicle for understanding the divergent practices of the artists, living and dead, who made these works half a century ago—or as recently as last month?

In the gallery’s second room and presented a bit as if in the storage area of a Wunderkammer, pedestals abutting pedestals, sculptures, draw- ings, and photographs are positioned so low that you must get on your knees to proper- ly view them. Here works by Marcel Duchamp and Alina Szapocznikow serve as core historic elements. In the 1950s, long before it was possible to recognize them as “outtakes” of his final artwork, Étant donnés:
1. La chute d’eau
2. Le gaz d’éclairage (1946–66), Duchamp produced a series of three strangely formed objects, looking like body casts. Although they don’t immediately reveal their indexical counterparts or their relationship to the nude
figure in Duchamp’s final installation, this trio of so-called “erotic objects” have a curious corporeality and take up an indeterminate 2 Sometimes the artworks’ resistance is concep- tual, as Tomo Savić-Gecan’s literally selfundoing works. For example the one that is nothing more than its value—a value declining every minute of the exhibition’s run. Set at CHF 100,000 at the opening of the show, it dwindles until it announces its own worth- lessness. Another piece by him quite literally changes the conditions of the exhibition, impacting humidity levels in the galleries according to unseen forces. Nathalie Perrin’s drawings, on the other hand, portray the chaos of a mind that sees connections between wildly divergent points of reference: classical music, military strategy, Russian novels, chess maneuvers, geography. To read them is to trace vertigo-inducing connections between the incomprehensible plenitude of the world and Perrin’s scribbled attempt to in some way map it.

Ungestalt brings together a subjective ensemble of newly commissioned and existing pieces of drawing, photography, sculpture, textile, and video by fifteen artists and one artistic duo, each of whom has responded to their moment with works characterized by a tantalizing, yet unnerving, volatility. In its amorphous excess, the show also poses the question: How can an exhibition itself become subject to a certain degree of unforming? One answer is: through some abdication of control. Accord- ingly, Florence Jung, known for her various acts of artistic evasion in which rumors or audience sequestration or counterfeit items replace art, was invited to exert her influence upon the exhibition. Her (possible) interventions into every aspect of the show’s preparation, presentation, and communication constitute her artwork, the details of which will remain confidential. Her imperceptible, incommunica- ble influence undoes the exhibition just as the shifting humidity levels and the rot wafting in the air subtly outmaneuver curatorial con- trol, rendering a show that is not quite govern- able, not quite containable, not quite able to itself achieve Gestalt.
www.kunsthallebasel.ch