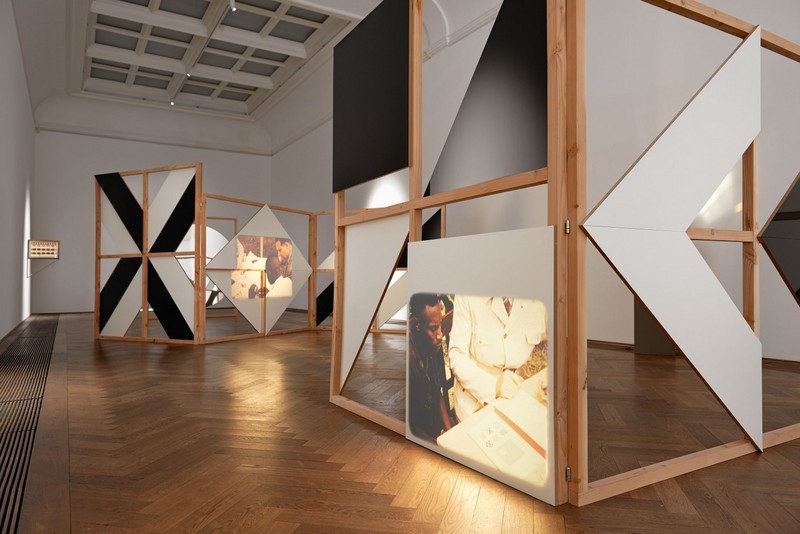 Patterns for (Re)cognition is the largest exhibition to date, and the first exhibition in Switzerland, by the Belgian artist Vincent Meessen, who will represent Belgium at the upcoming Venice Biennale. Meessen’s often collaborative and rigorously research-based practice includes investigations into gaps in the writing of history, particularly colonial histories. At Kunsthalle Basel, the artist presents several new modular sculptures; a series of 16-millimeter films based on found film fragments; a new sound piece; borrowed early-19th-century ritual objects originating from the Kuba Kingdom; and a series of folded paper works. All of these serve as a visual and conceptual backdrop for a selection of 1930s paintings by the little-known Congolese painter Thela Tendu.

Meessen acts as both artist and curator of what is the largest show of Tendu’s abstractions to date in a kind of exhibition-within-the-exhibition. Tendu’s artistic output includes geometric abstraction, folktale illustrations, and figurative paintings depicting his animal cosmogony and encounters with colonial modernity in different fields of quotidian life. As a precursor to Modern art in the Congo, his oeuvre offers a remarkable example of the development of abstraction in African art in parallel with—but without an awareness of—its proliferation in Western Modernism. The presence of the works here is possible because a significant cache of Tendu’s work, once owned by the art critic and colonial administrator Gaston-Denys Perier, was donated to the Royal Library of Belgium in 1959 and has been impeccably preserved by the library ever since.

Room 1
The exhibition begins where Meessen’s research for this project first began: an investigation of experiments carried out by the French psychologist André Ombredane in the Belgian Congo. Meessen came across films from the 1950s documenting Ombredane’s experiments carried out in the Congo, including some intended to test “the mental level of black folk.” Taking these films and the questions they raise as his starting point, he developed a larger inquiry into the role of abstraction in the development of both Modernism and colonial history. The title Patterns for (Re)cognition obliquely references the tests that measure the brain’s capacity to identify and memorize abstract shapes, hinting that the operation of recognition (by whom, for whom, and according to whose criteria?) needs to be questioned.
Central to the exhibition is a series of modular structures conceived by Meessen with the architect Kris Kimpe, upon which the films of Ombredane’s tests are projected. Echoing the geometries pictured in the film, and compressing the space into a kind of experiential labyrinth, Meessen’s scenography suggests that the matrices and cubes of Ombredane’s cognitive psychology can no longer be understood as neutral forms, nor can the administration of these “tests” be separated from the cultural bias lurking behind the supposed objectivity of science. Tendu’s framed paintings line the walls of the room. One that was previously exhibited has its backside revealed to show the annotations, stickers, and other markings of its trajectory.

Room 2
Installation views of Paul Klee’s 1967 exhibition at Kunsthalle Basel are folded into delicate abstract paper sculptures made with the help of the bookbinder Muriel Gerhart. The images present Klee—and his incontrovertible place in Western art history—as a counterpoint to the paintings by Tendu spread throughout the exhibition. Whereas Klee had already enjoyed institutional recognition from early on in his career, it took Tendu nearly a century longer to garner any major institutional attention at all. And in Tendu’s case, it only happened thanks to the initiative of another artist. These folded photographs are combined with early-19th-century ritual objects from the Kuba Kingdom, the sub-Saharan African region where the use of abstraction in textiles, objects, and murals was most developed, and where Tendu lived at the time he was painting. Tendu’s precision and process is highlighted through a series of photographs of the backsides of his paintings, in which one can detect the artist’s preparatory tracings. Upon these Meessen has implemented a pain- staking folding process that combines the abstract patterns of Tendu’s works with those of the Kunsthalle’s herringbone wood floor.

Room 3
Moi (Me) Thela Tendu, Je (I) Tshyela Ntendu, Tshelatende, theladeo... : Nearly 40 variations on the artist’s name appear penned across his different paintings, sometimes discreetly, sometimes more centrally, becoming a motif in itself. Meessen interprets this polygraphic gesture as a proto-conceptual statement, one that undoes Western art history’s classificatory regime and its location of authenticity—and, indeed, modernity—in the artist’s signature. In collaboration with the typographer Pierre Huyghebaert, Meessen’s work mimics museum labels in order to highlight this reading of Tendu’s practice. Meessen thus suggests that the exhibition as a whole is not only about interpretation and reading (recognition and misrecognition), but also about the signature and the author.

Room 4
Sampling the Man of Memory is a new sound piece made with the Belgian-Rwandese sound artist Aurélie Nyirabikali Lierman, featuring collected sounds alongside the voice of the 85-year-old Belgian historian and Kuba expert Jan Vansina, known as the “father of oral history.” The piece emanates from four vintage NAGRA audio recorder-players (Nagra means “I will record” in Polish, the language of their inventor) not unlike what Vansina would have used during his research expeditions in the Congo. Magnetic tape reels form a crisscross pattern as Vansina recounts an anecdote of his serendipitous meeting with Tendu in 1953. This oral testimony is by perhaps one of last surviving people who can assert that Tendu was still alive more than two decades after several historical records declared him dead. This adds another layer to the questioning of history writing that is a leitmotif of the exhibition.

Room 5
Serving as the finale, a spectacular array of Tendu’s paintings are displayed, including two works that mix abstraction with figurative elements, testifying to the diversity and richness of the Congolese artist’s formal cosmogony. A vast floor piece by Meessen takes the geometries of the Kunsthalle’s own architecture—the herringbone pattern of the wood floor and the crisscrossing of the ceiling skylight—as its inspiration. The piece serves to reflect and reconfigure vision in the space, insisting on visitors’ close contact with Tendu’s works on the surrounding walls.

More than a display device, Meessen’s scenography is, in his words, a “constructivist scenario” producing conditions for legibility of colonial perceptions and the questionable authority of history as it has for too long been told. Patterns for (Re)cognition is about the blind spots in that history, specifically the blind spot through which Tendu’s pioneering work could remain largely unrecognized despite its having caused a sensation in the early 1930s in Brussels, Geneva, Paris, and Rome (many works in the show have not been exhibited since then, or were never shown at all until now). But it inevitably also reflects Meessen’s practice and larger oeuvre, which self-consciously involves collaboration, research, and quasi- curatorial activities. His particular reading of history emerges from his (Belgian) cultural horizon and his understanding of the responsibility and legacy of Belgium’s colonial past—which is, in fact, also our global history.

Realized in partnership with the Royal Library of Belgium, Brussels.