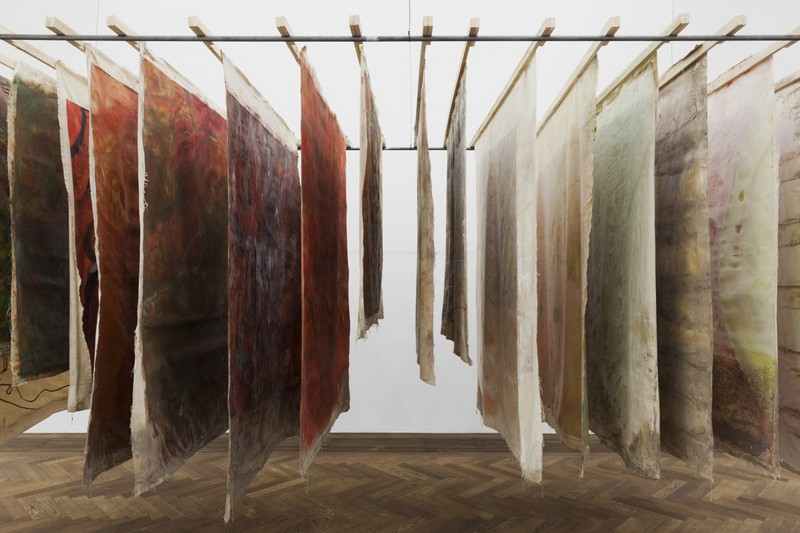 Vivian Suter’s house and studio in Panajachel in Guatemala are surrounded by avocado and mango trees, interspersed with tall banana plants and a few coffee bushes. She arrived in the village on Lake Atitlán during a trip across North and Central America in 1983 and has lived there ever since. Vivian Suter was born in 1949 in Buenos Aires, Argentina. From 1962 until 1983 she lived in Basel and continues to maintain close links with the city and its art scene today. She has also spent time in Vienna, Africa, Bern and Rome.

Her home and studio in Guatemala are situated amidst dense vegetation in the grounds of a former coffee plantation. Large windows and doors, verandas and bridges create fluid transitions between indoors and outdoors. This mutual relationship shapes not only the artist’s everyday life but leaves a direct impression on her works, too.

The exhibition at Kunsthalle Basel brings together works from the past thirty years. Monochrome compositions whose translucent glazes leave the canvas still visible are accompanied by sketch-like impressions of landscapes and paintings with vibrant, tropical colour combinations in clearly demarcated planes. Also on show are representations of nature in which the vegetation assumes ornamental forms, pictures that convey impressionistic moods of light and colour, and abstract paintings with thick impasto surfaces.

From a stylistic point of view, Vivian Suter’s works can thus be divided into various groups. These were not produced in clearly defined, strictly chronological phases, however, nor can they be precisely dated. Her works are intuitive and emotional visual approaches to what she sees around her. The artist extracts motifs and interprets moments from her surroundings, and hence her artistic decisions are profoundly shaped both by the changing seasons and equally by one-off events and upheavals in her immediate environment. In 2005, when Hurricane Stan wrought devastation across large swathes of Central America with winds, flash floods and landslides, it caused great damage in Panajachel, too. Vivian Suter’s studio was filled knee-deep with mud, partially burying the paintings that were stored there. Instead of seeing them as ruined, she decided to declare the ‘damage’ as part of the work and thus to award the nature around her not only the quality of pictorial motif but an active role in the shaping of the picture. In the wake of a second tropical storm, Agatha, in 2010, Vivian Suter experimented with weathering processes that led to a group of mould paintings. Using unmixed and consequently colourless fish glue as her medium, she painted compositions onto canvases which she then left outdoors for a period of time. This exposure to the elements encouraged the formation of grey mould on the areas coated with fish glue, which brought out, in seemingly autonomous fashion, what the artist had painted.
Even before the tropical storm, however, Vivian Suter did not work exclusively inside her studio. For her, the studio is not a hermetically sealed building but an open space in which indoors and outdoors are closely entwined. While working on her paintings, she frequently moves them between her studio, the large veranda and various parts of the garden. Many works incorporate direct traces of their natural surroundings, insofar as the artist allows influences of climate and vegetation to alter the canvas, the paint medium and its colour. Some compositions are thus brought to a conclusion by nature; others she takes back to the studio in order to continue working on them there. The natural environment thus enters the painting not only at the pictorial level, through perception, but in a literal fashion. Palpable in these works is a first-hand relationship between real and painted space. They are not isolated extracts from this environment, but agents of the original context from which they came.

Vivian Suter’s surroundings and her experience of them played a role in her early works, too. While some of these were produced on her many travels as a kind of visual journal, most were created after her return to her Basel studio. Here she took up memories of what she had seen and assimilated citations of palettes and motifs seen on her trips into her own language of form. These early works already demonstrate the intrepid openness with which Vivian Suter approaches the world and art, and which is summed up in the title of the present exhibition: intrépida.

Thus the start of the 1980s saw her creating works on paper in which she married the painting process with an almost sculptural crafting of the material. As she worked, she adapted the increasingly damp paper to the forms she was painting, trimming it or adding to it, so that instead of the support dictating the boundaries of the motif, the motif determined the shape of the support.

The plants and objects still recognizable in these early works soon dissolved into expressively abstract paintings built up out of multiple layers of paint. In these works, the vitality of the painting overwhelms the conventional rectangular format. This painting became lighter and more atmospheric following the artist’s move to Panajachel.

For Vivian Suter, the individual painting stands not alone and isolated but at all times in association with other works. Each one preserves its own independence; in combination with one another, however, her paintings begin to tell the story of how the artist sees her surroundings and how she approaches them.

What generally confronts us in the case of paintings by Vivian Suter is not exclusively a purely visual image, since the artist uses the presentation of her works to connect them with our ‘real’ world. While they are still in her studio, she detaches most of her canvases from their stretcher once they are dry, attaches them to a batten and hangs them up on racks. In this exhibition she presents many works in this manner and has only mounted a small number back onto stretchers. If a canvas is stretched, the viewer perceives primarily the image, which communicates a reality conceived in purely visual terms but with its own validity. The support – canvas and frame – thereby recede into the background. Not stretched, the pictorial support is perceived as a simple cloth, the illusion of the picture is dissolved and hence the picture becomes part of our sphere of experience.

With a nonchalant gesture, Vivian Suter deconstructs the status of the self-contained single image yet further. She cites the storage racks in her studio in which the canvases are hung up side by side, a system that makes it impossible to look at each one properly for itself. She hangs other works one on top of the other or with the painting facing the wall, so that only the back is visible. Some openly display the fact that they are made up out of several strips of canvas and thereby recall curtains. With the curtain, Vivian Suter takes up a motif with a long tradition in art history: in the context of the discourse surrounding art’s ability to reproduce reality, the curtain serves to expose, as an illusion, what we might otherwise take for real. Vivian Suter does not aim at an illusionistic spectacle, however. Strategies of concealing and revealing interest her as ways of rendering visible something that has sprung from the power of her imagination and her own sensibility.

At the invitation of Vivian Suter, the Kunsthalle is showing a selection of collages by Elisabeth Wild.

Elisabeth Wild was born in 1922 in Vienna, Austria. In 1939 she emigrated with her parents for political reasons to Buenos Aires, Argentina. There she studied painting at the Academia Nacional de Bellas Artes. At the same time as exhibiting her work in Buenos Aires and Mar del Plata, she earned her living by designing textile prints. In 1962 she moved with her Swiss husband, August Wild, and their daughter Vivian to Basel. Since 2007 the artist has lived with her daughter in Panajachel, Guatemala. Elisabeth Wild’s painting belongs to the tradition of Magic Realism. She has frequently treated classic themes such as landscapes, still lifes and portraits. For the past few years she has worked primarily in the medium of collage.
Her collages are enigmatic compositions that incorporate a variety of different motifs. Alongside symmetrically constructed forms that recall ethnographic cult objects, these collages present ornamental patterns inlaid with the sumptuousness of pietra dura intarsia, as well as abstract asymmetrical and dynamic compositions. Other collages open up surreal landscapes which are coherent in themselves but not true to reality. Although their cut and trimmed edges clearly point to their ‘made’ nature, ‘coherent’ is a fitting description for all these collages.

The majority are relatively small – no larger than the page of a magazine. Their size depends on the picture that the artist has chosen as the background and support for her collage. Her formats consequently also provide a clue to the source of her materials: they are taken from adverts in glossy magazines.

From these Elisabeth Wild cuts out motifs such as items of jewellery, furniture and make-up palettes, but also wooden flooring, house facades and blue skies. What matters to the artist is not the object itself, but the purely formal properties of its reproduction: the surfaces and materials as well as the elementary geometric shapes. Whether this reproduction takes the form of a photograph or an illustration is unimportant. For these images are composed first and foremost of colours and lines, which she organizes in a new and almost painterly fashion. Some objects are left whole, others trimmed in order to complement the collage composition in terms of colour or structure.

The results are self-contained compositions which are all distinguished by the fact that they illustrate slightly displaced realities. The overlapping of individual elements frequently suggests a sense of spatial depth and a subdivision into foreground and background. The resulting pictorial arrangement departs, however, from the visual logic to which we are accustomed. And although objects such as jewellery and furnishings remain visible, they become for us simply a kind of door, beyond which our eyes open onto a new world.

Elisabeth Wild does not use these quotations from the real world in order to invoke, as we contemplate them, the context from which they are sourced. She does not wish to bring reality into art, as has often been an aim in the past. In the tradition of Surrealism, her collages point instead to the existence of another reality, which is represented with artistic means and thereby freed from the rules of logic.

The exhibition is generously supported by Alfred Richterich Stiftung
www.kunsthallebasel.ch