„with by through because towards despite“ 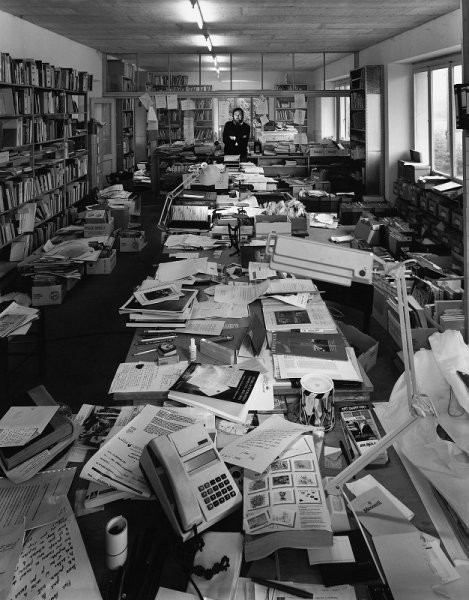 Harald Szeemann in his Agentur für geistige Gastarbeit (Agency for intellectual guest labour), 1994.
Photo: Armin Linke
„with by through because towards despite“

The catalogue of all exhibitions by Harald Szeemann and Impronte di pennello n. 50 ripetute a intervalli regolari (30 cm) by Niele Toroni

Curated by Roman Kurzmeyer
To mark the publication of the catalogue of all exhibitions by Harald Szeemann (1933-2005) the Kunsthalle Basel presents an exhibition of a small selection of documents from the archive of Harald Szeemann, the most prominent free-lance curator in the late 20th century, together with an intervention by Niele Toroni (*1937, lives in Paris). The focal point of the exhibition is the overall catalogue, compiled by Tobia Bezzola, Roman Kurzmeyer and the Edition Voldemeer together with Harald Szeemann.
In the numerous exhibitions which he curated after 1957, first in Switzerland and later worldwide as an internationally acknowledged free-lance curator, Harald Szeemann not only altered the concept of how modern and contemporary art should be exhibited, he also put the institution of the museum up for debate. In the exhibition When attitudes become form at the Kunsthalle Bern in 1969, which addressed the theme of the processual aspect of contemporary art in the year after the student unrest, Szeemann attracted the attention of the international art scene not only because of the participating artists, but also because of his exhibition concept. For that exhibition, Szeemann gathered together European and American artists of the youngest generation, new names like Richard Serra, Robert Morris, Michael Heizer, Eva Hesse, Bruce Nauman, Joseph Beuys, Mario Merz, Richard Artschwager and Lawrence Weiner, whose works were produced on site, in Berne. Szeemann was fully aware that in order to embrace the diversity of new modes of production, presentation and distribution of artwork in concept art, land art, installation, environment and happening, an entirely new model of exhibition display was necessary. Step by step, and in agreement with the artists of his generation, Szeemann embarked upon new presentation forms parallel to the expanded new concept of art.
On leaving the Kunsthalle Bern in 1969, as a consequence of the discussions triggered by the controversial exhibition When attitudes become form and to counter a feeling of alienation, Harald Szeemann set up the Agentur für geistige Gastarbeit (Agency for intellectual guest labour), the intention being “to find and do something new and at the same time set myself off from the official art business”. The agency’s original guiding principle was: “to exchange possession for free actions”. The agency commissioned its one and only employee, Harald Szeemann, to develop exhibition concepts, do the respective research, secure his findings in an archive, organise the exhibition and finally mount it himself, right down to the very last nail, and mediate between it and the public. In 1970 Szeemann was elected secretary general of documenta 5 (1972), the most important exhibition of international contemporary art to date. From 1973 onwards, he placed his Agency at the service of his Museum of Obsessions.
Szeemann had already alluded to the theme of his archive in an exhibition at Galerie Givaudan in Paris in 1970 and in the publication Dokumente zur aktuellen Kunst 1967-1970 (Documents on contemporary art 1967-1970), in which he presented the late 1960s as a caesura, both in his self-image as a curator and in the self-image of artists of his generation. The exhibition at the Kunsthalle Basel will deliberately focus on that period in the late 1960s, when Harald Szeemann was preoccupied with what was called at the time the Studio / Gallery / Museum Triangle, reinvented himself as a free-lance exhibition curator, and founded the Agentur für geistige Gastarbeit. The exhibited documents all date from that era of change. It is no coincidence therefore that the publication of the catalogue of all Harald Szeemann’s exhibitions is being celebrated with an intervention by Niele Toroni.
Niele Toroni has been using the same method of painting since 1966: he repeats imprints of a certain kind of paint brush, no. 50, at regular intervals of 30 cm on various carriers, but usually directly onto a wall, using unmixed water-soluble acrylic paint. Toroni presented his new working method for the first time in 1967 at an exhibition by the artists group BMPT, of which Daniel Buren, Olivier Mosset and Michel Parmentier were also members. Since then, the description of his method has also been part of the title of his works: “Impronte de pennello n. 50 ripetute a intervalli regolari (30 cm)”. Toroni concentrates painting into a simple elementary action which does completely without narrative or invention. It has been said that Toroni is pleading the cause of the beautiful, the true and the useless, and thus of the autonomy of art. As a result of what Szeemann once called a “celebration of the total”, the impact of Toroni’s work is expansive and sublime, yet at the same time it is delicate, modest, lyrical and unspectacular. His extant works are small in number, as most of them were created for a limited space of time. What interested Szeemann about Toroni was just that, namely, the temporary existence of his painting, which, also like an exhibition, can be unforgettable “for whoever saw it”.
The catalogue of all his exhibitions, on show in Basel, is a volume of materials and sources relating to Harald Szeemann’s curatorial work. The material reproduced in this book is in the archive of the Agentur für geistige Gastarbeit. It was there, in a former factory in the Maggia Valley (Ticino), that all the strands came together, and it was from there that the ideas were sent out into the world again. The catalogue of all the exhibitions is a product of that place. It shows the exhibitions by means of documents which Szeemann preserved.
Exhibition on the occasion of the publication:
Harald Szeemann, with by through because towards despite. Catalogue of all exhibitions 1957-2005, ed. by Tobia Bezzola & Roman Kurzmeyer, Edition Voldemeer Zürich / Springer Vienna New York 2007.
www.kunsthallebasel.ch