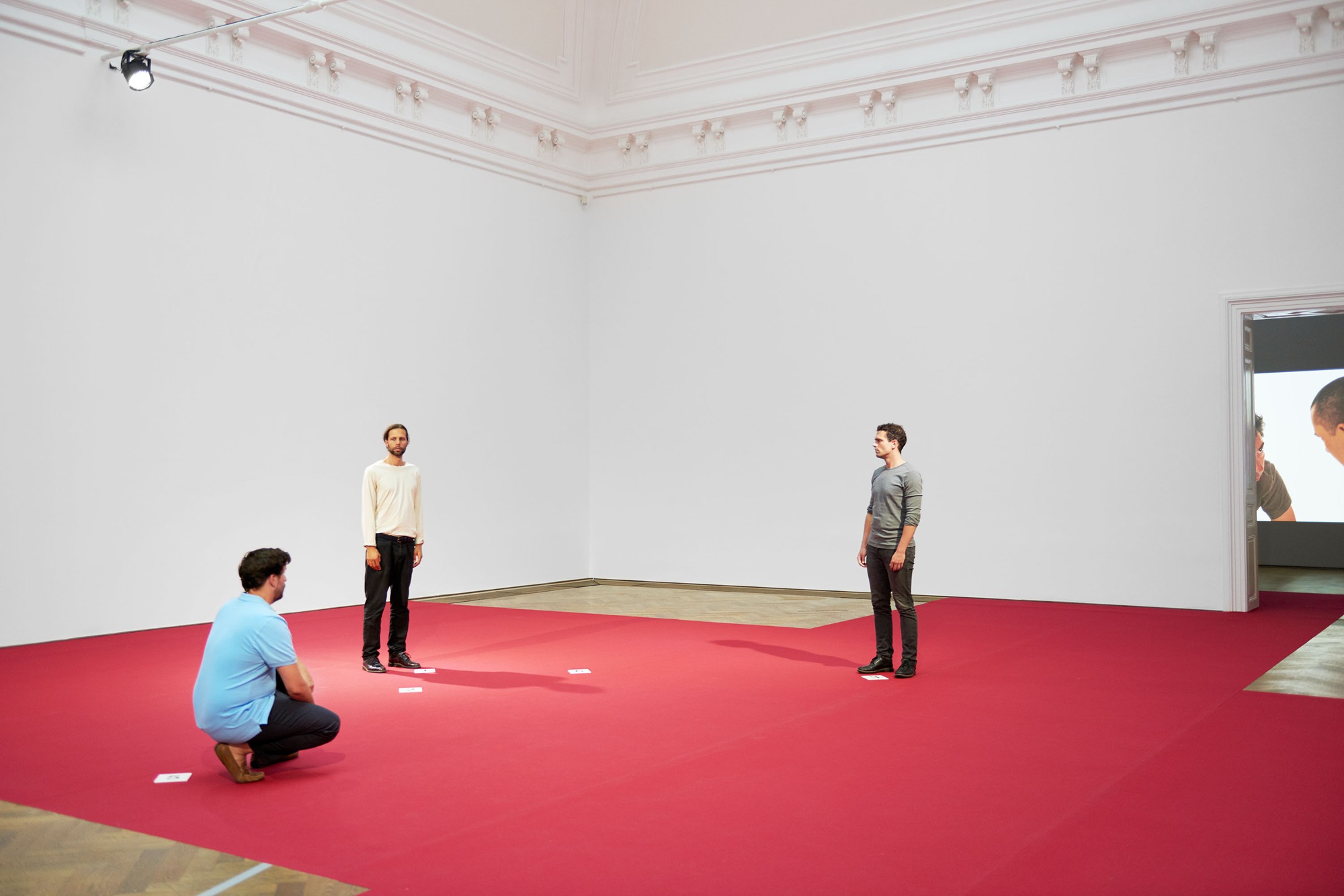 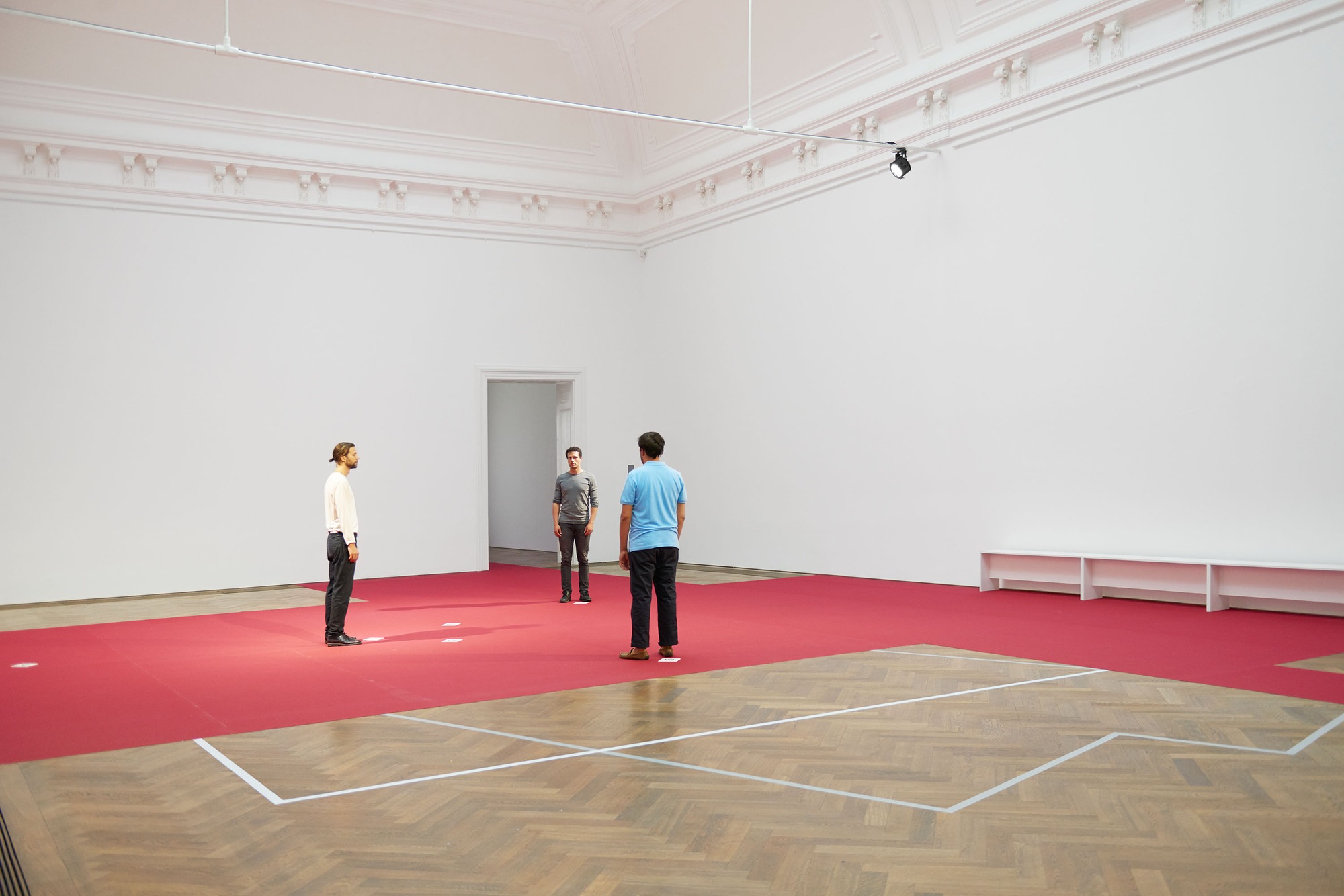 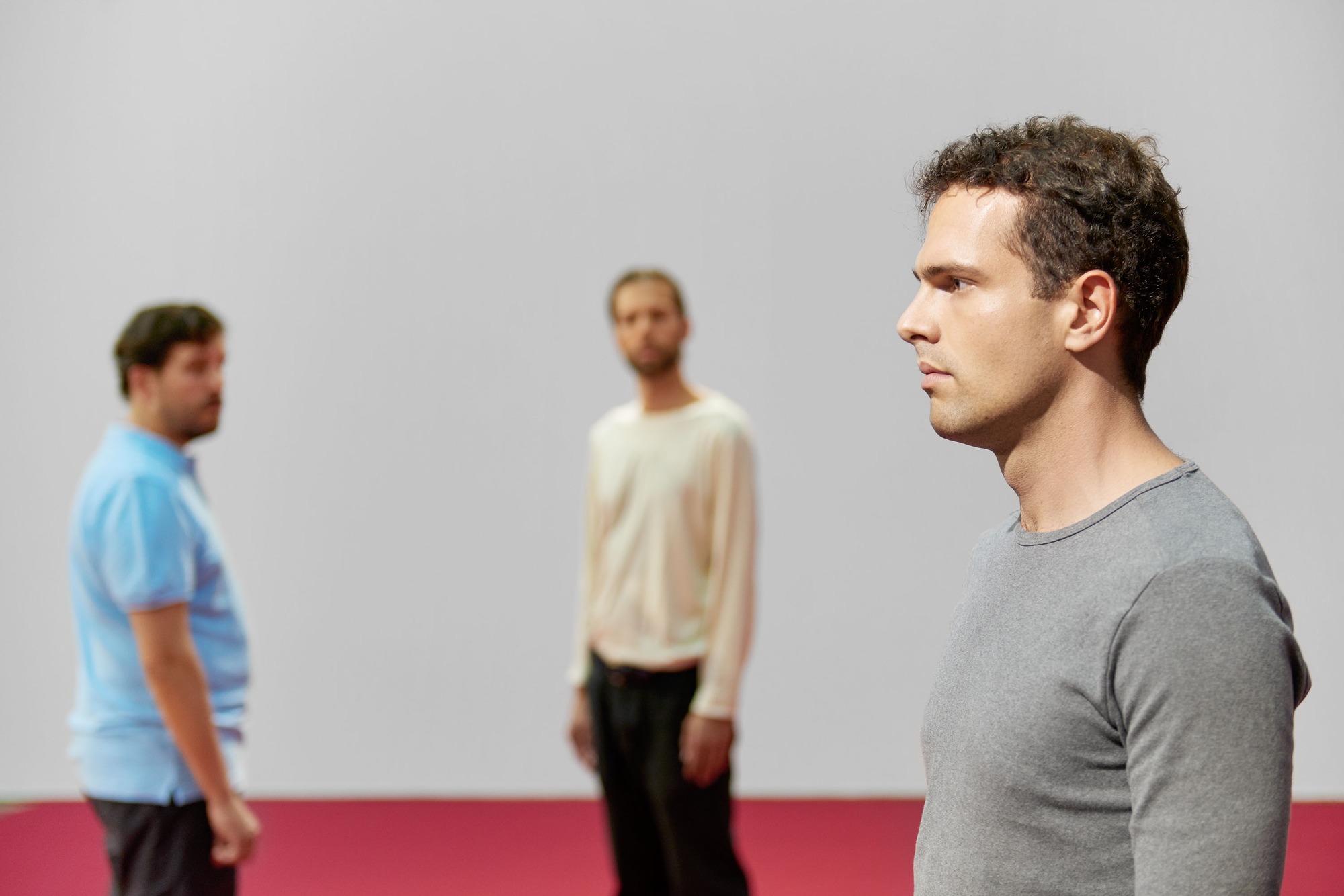 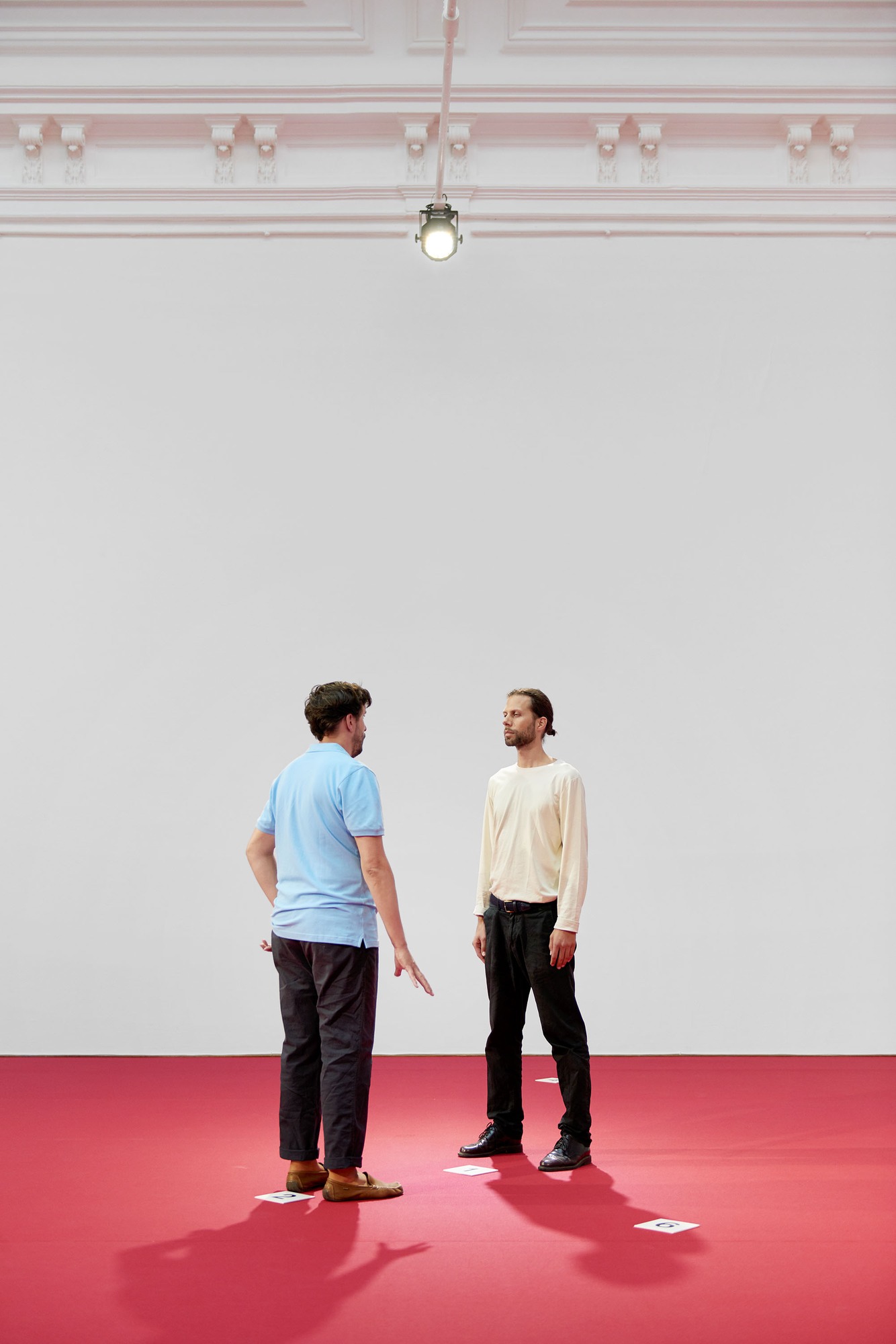 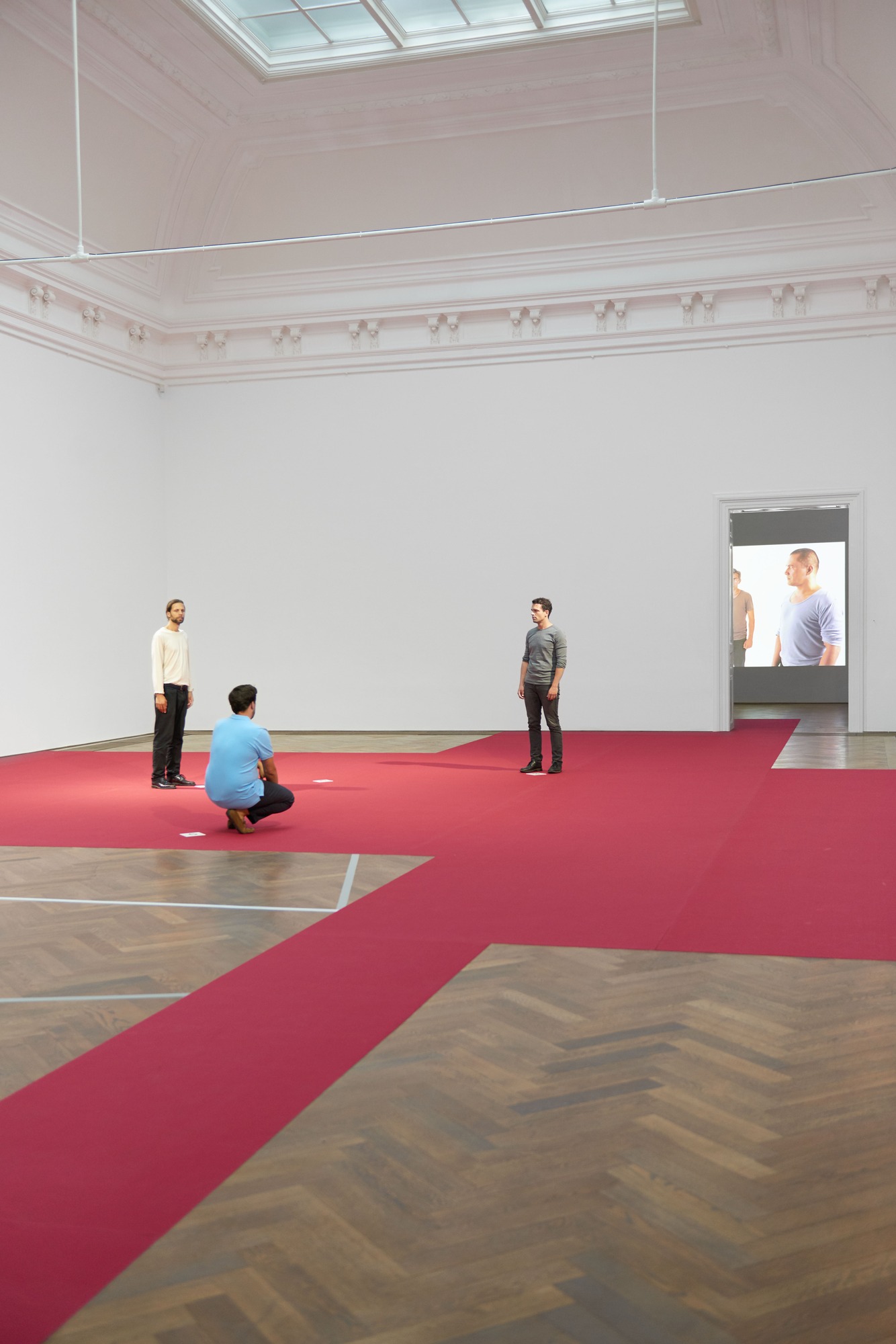 Imagine a place where only men exist— men of average build, white, Western. What does not fit this category is omitted. The men move in such a way as to appear suspicious and anxious, involved in an enigmatic exercise of power. They perform minute gestures without speaking— head tilting, leaning in, circling one another— doing their best to match the narration of a disembodied male voice. What is happen- ing? Something erotic, violent, rivalrous? Is one the perpetrator, the other the victim, the third a witness? Uncertainty sets in as the recorded voice relays with almost forensic clarity a set of possible encounters between the men.

So begins Counterpoint, a new work by Bulgarian performance artist Zhana Ivanova. It has moments of scheduled and preannounced liveness, when three male performers activate the sparse stage elements. To comprise the piece, the performance is complemented by a text, a film, and unannounced performances as well as moments without any performance at all, when a recorded voice once again is heard. It is especially when none of the actors move in the space that a visitor might begin to wonder if he (should he be male) or some other man in the room is “the man” the voice is referring to. After all, the characterization detailing “symmetric eyes” or “broad shoulders”makes it possible for nearly any man to fit the description.

In a back room, the video projection shows a different set of three men moving, mutely, in a stark white setting. They seem engaged in a mysterious ritual or game, or perhaps they are inventing ways to communicate with one another. Clearly noticable is a looseness in their movements that is absent in the live performances. Are they about to fight or dance? Dominance and control are implied (they always are in Ivanova’s work) as they seem to test one another’s boundaries, moving around and sometimes touching.

There is something both sci-fi and also weirdly mathematical about the constellation of different elements: the riddle that greets you as you enter, the enigmatic numbers spoken by the omniscient voice or found on the floor of the set, the unclear sense of what time or place is being performed. But even in this disjointed spatiotemporal zone, there are undeniable parallels with a world in which other “actors” (men of average build, white, Western) circulate, trading power, trying to figure out who has more or is ready to give it up.

Stefan Zweig’s 1942 Schachnovelle (The Royal Game) is the backdrop to all of this. In Zweig’s novella, the protagonist attempts a mental exercise in which he plays chess against him- self, raising questions as to how someone might take up the role of two competing opponents simultaneously. Ivanova is equally fascinated by strategies attributed to the Russian politician Vladislav Surkov, a former adviser to Vladimir Putin whose tactics as he himself describes, “use conflict to create a constant state of destabilized perception to guide and control [the opponent].” Prompt- ed by these two central sources of inspiration, the artist creates a situation in which doubt and the strange and vaguely looming violence of power play among men become palpable. In Ivanova’s work, our contemporary social and political landscape is metaphorically laid bare in stark abstraction, akin to a Samuel Beckett play.

Counterpoint relates closely to two other per- formative works by the artist previously shown at Kunsthalle Basel, each exploring quotidian power dynamics (All the Players shown in 2015 and Borrowed Splendour in 2016). Together they have incrementally in- troduced Ivanova’s Ongoing Retrospective, a long-term project that upends the traditional nature of the retrospective exhibition. For not only is Ivanova at the relative beginning of her career, but her “exhibition” is being staged chapter by chapter, piece by piece, over an unforeseeable number of years, in a retrospective that will take form over time. By running counter to the common form of the retrospective, yet claiming to be one, the project exposes and examines that format’s conventions. It finds its foundations in the very tenets of the artist’s work: her subtle, performance-based pieces reveal the unwritten but omnipresent rules, codes, and systems of human interaction.

Zhana Ivanova was born in 1977 in Russe, Bulgaria; she lives and works in Amsterdam.