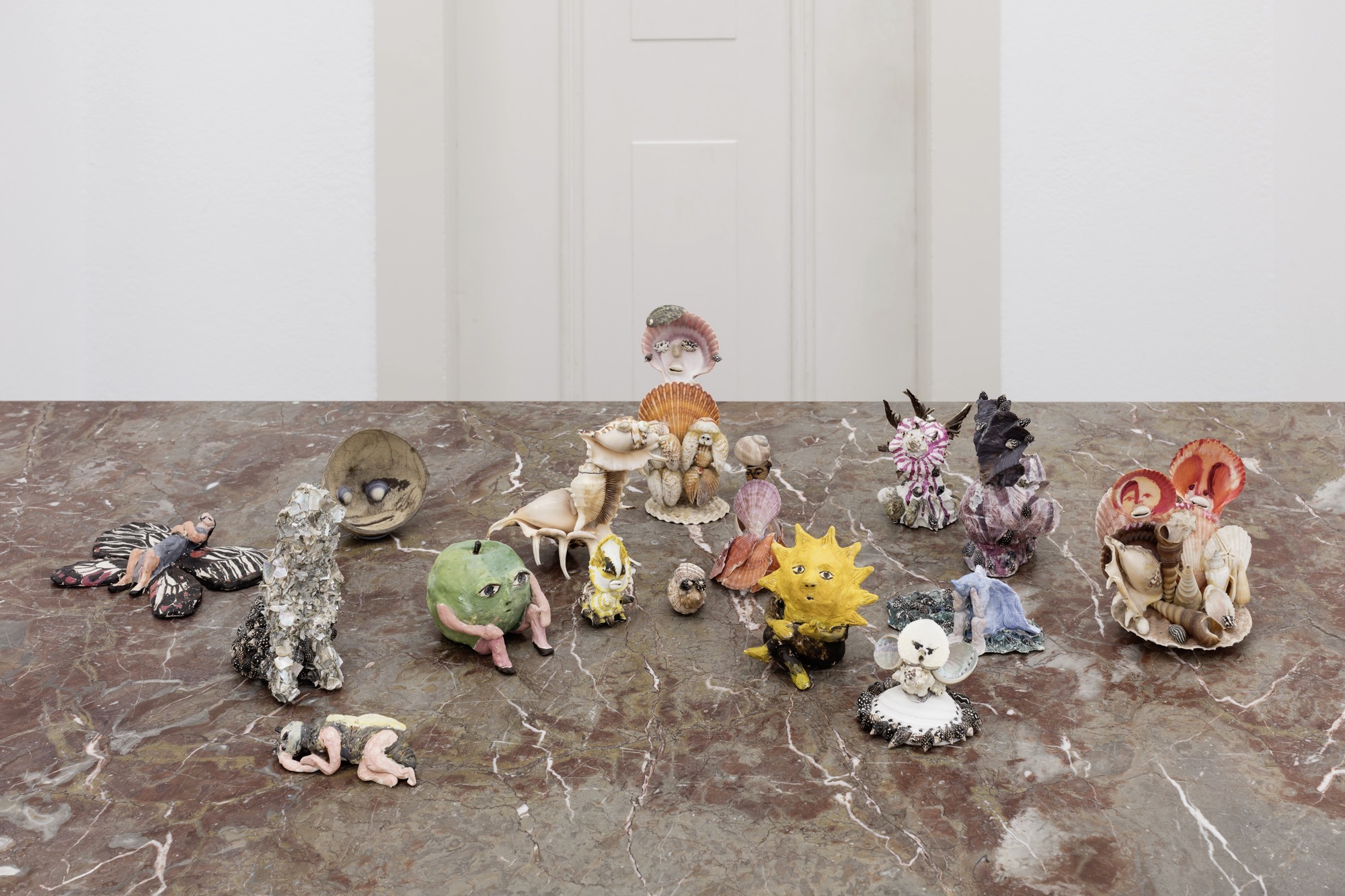 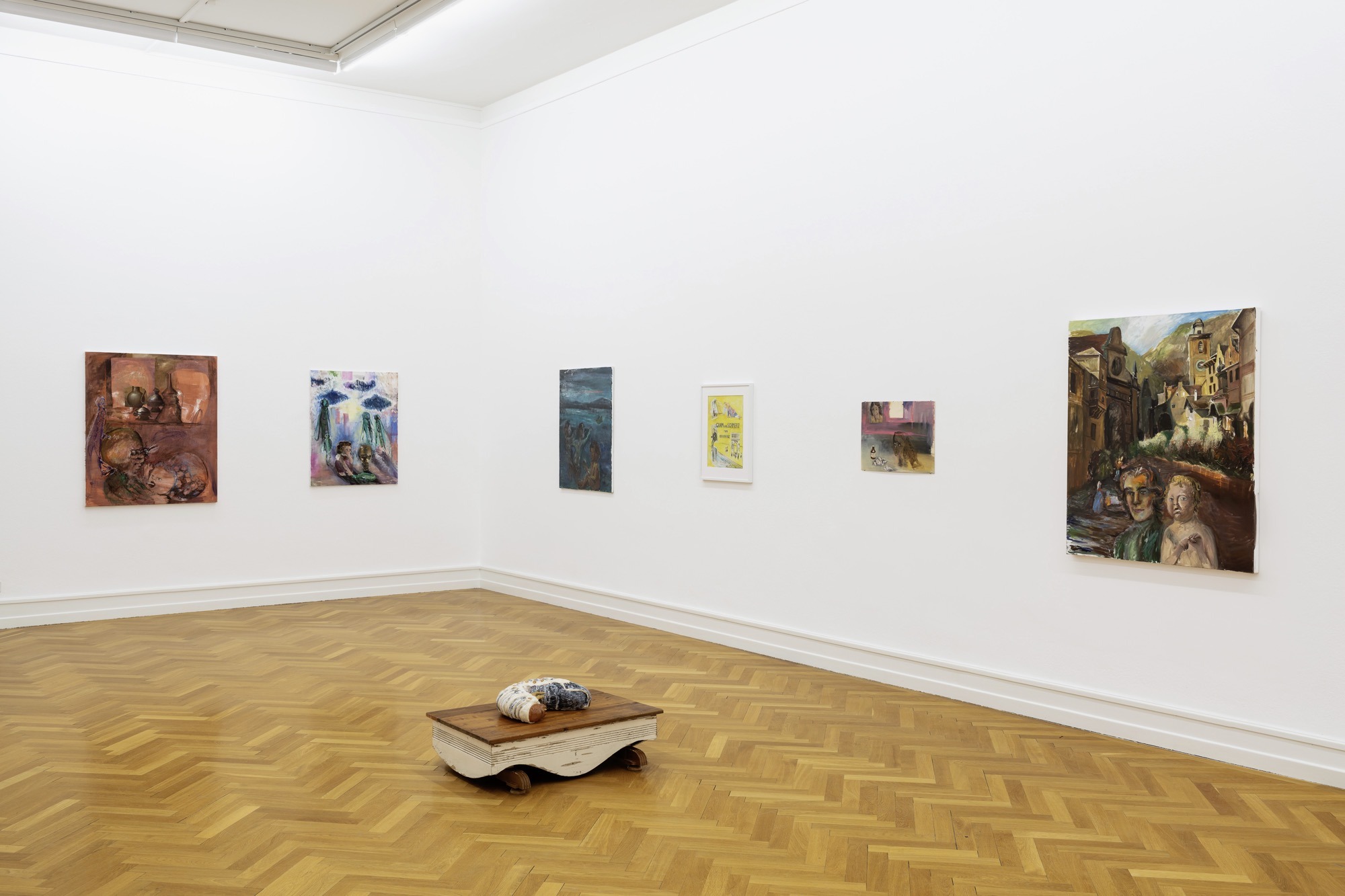 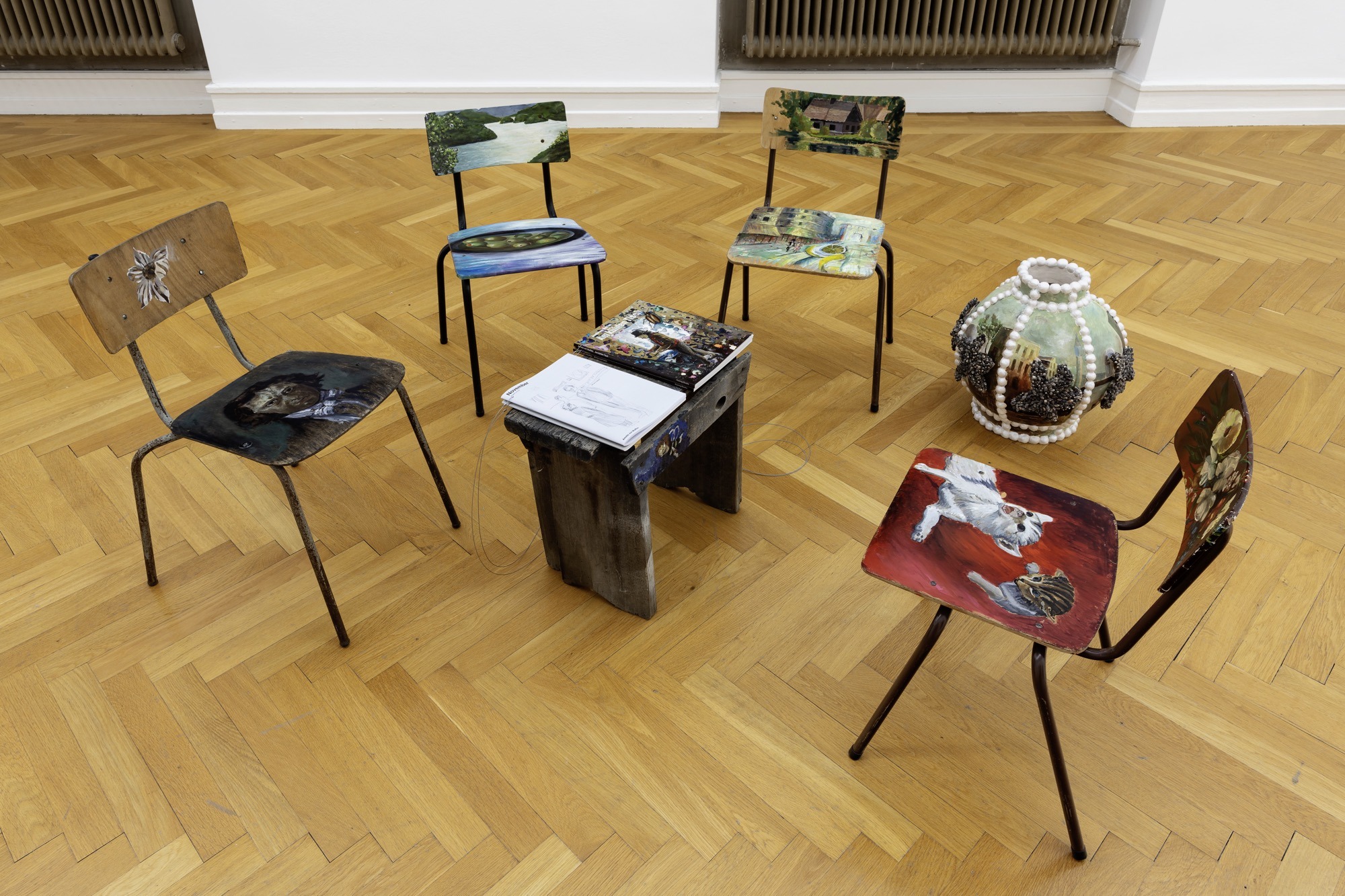 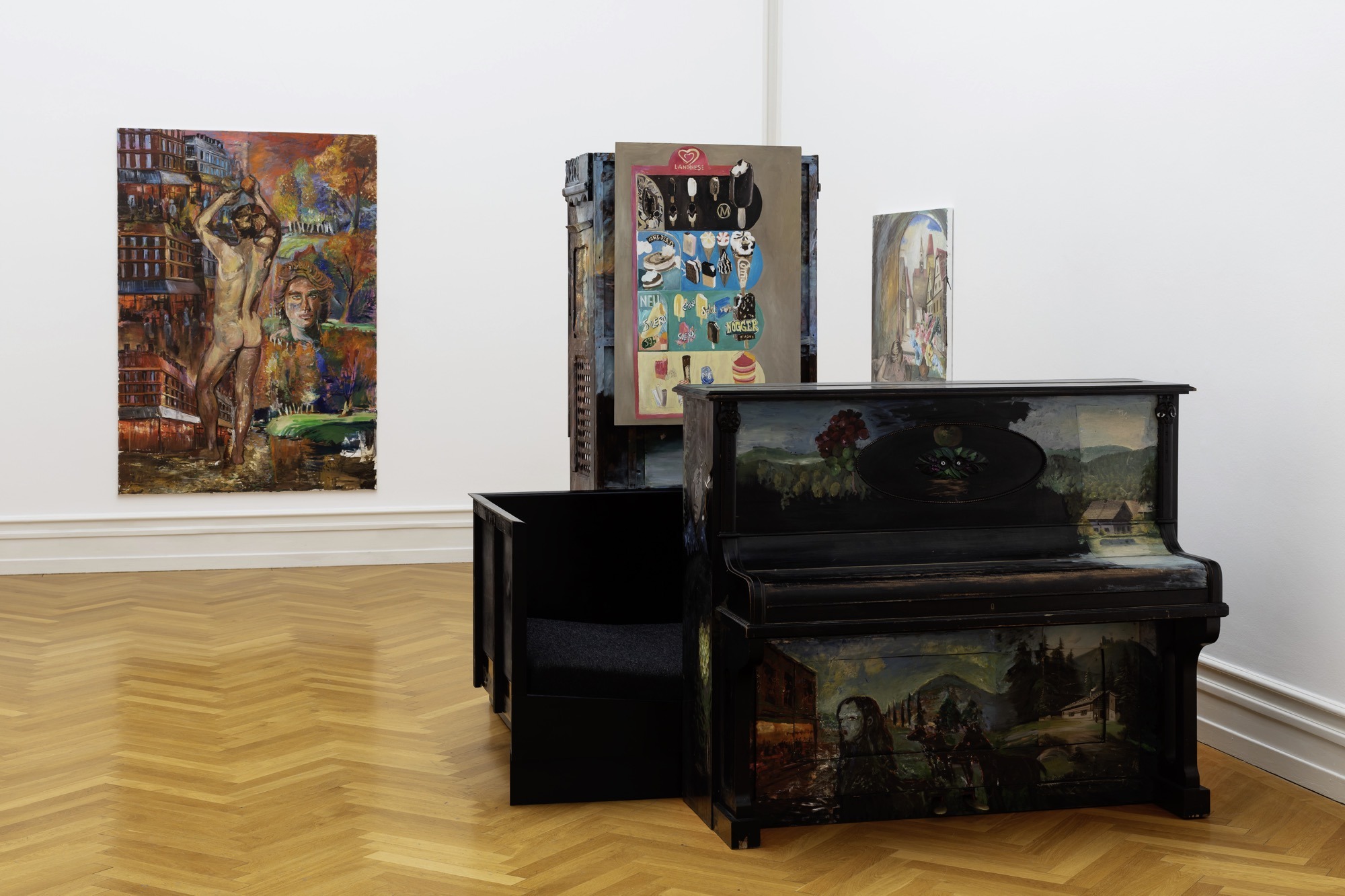 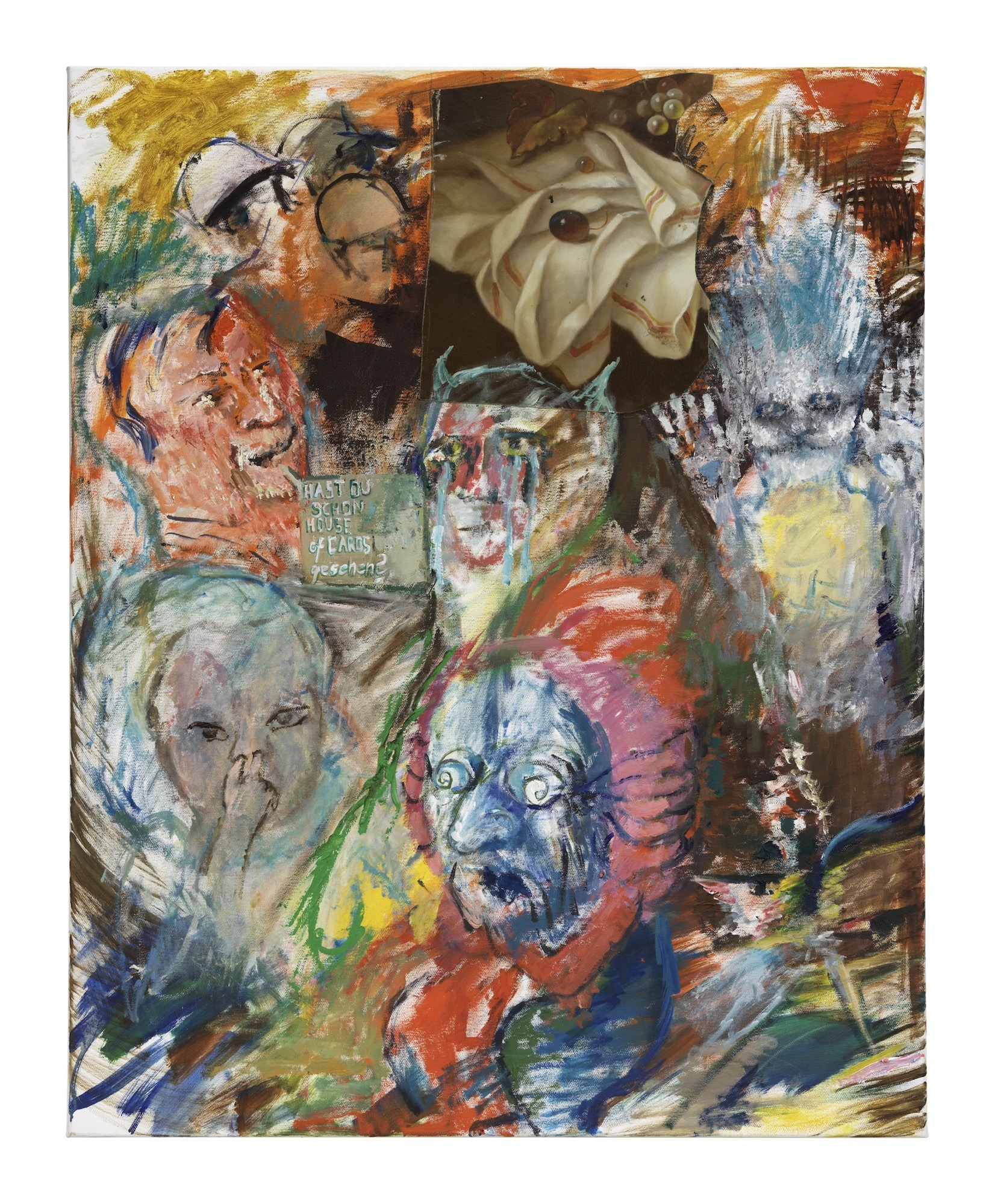 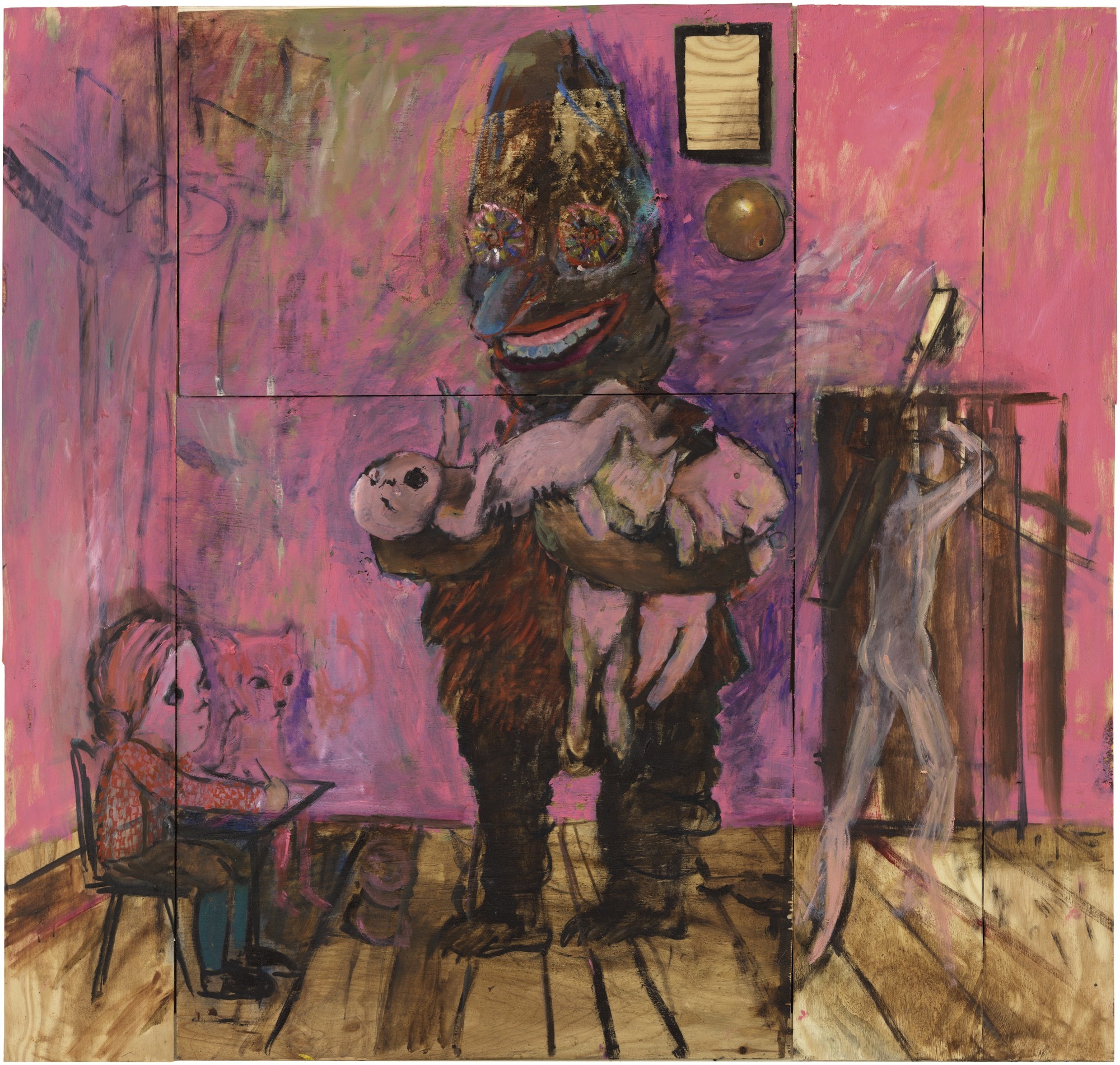 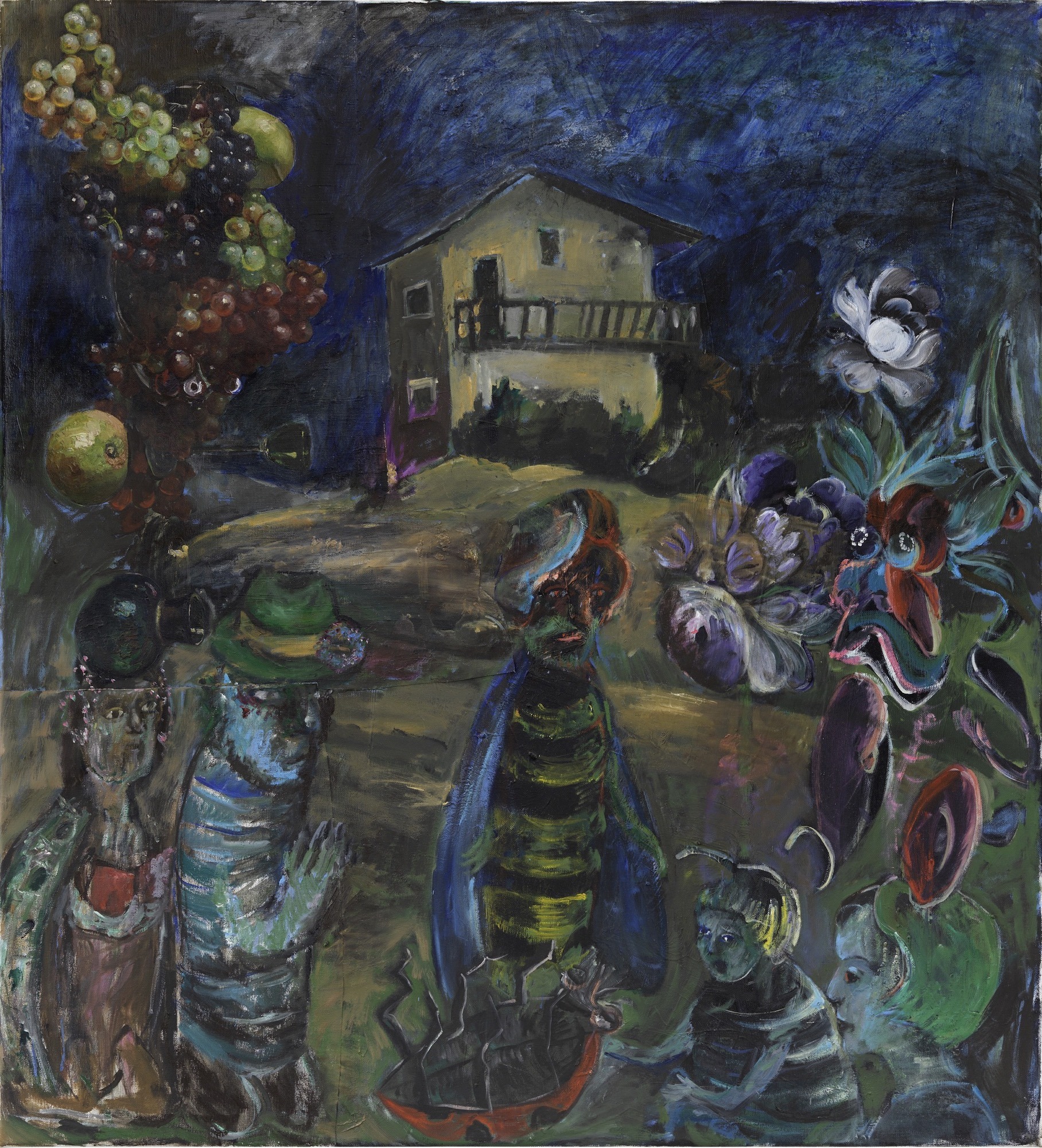 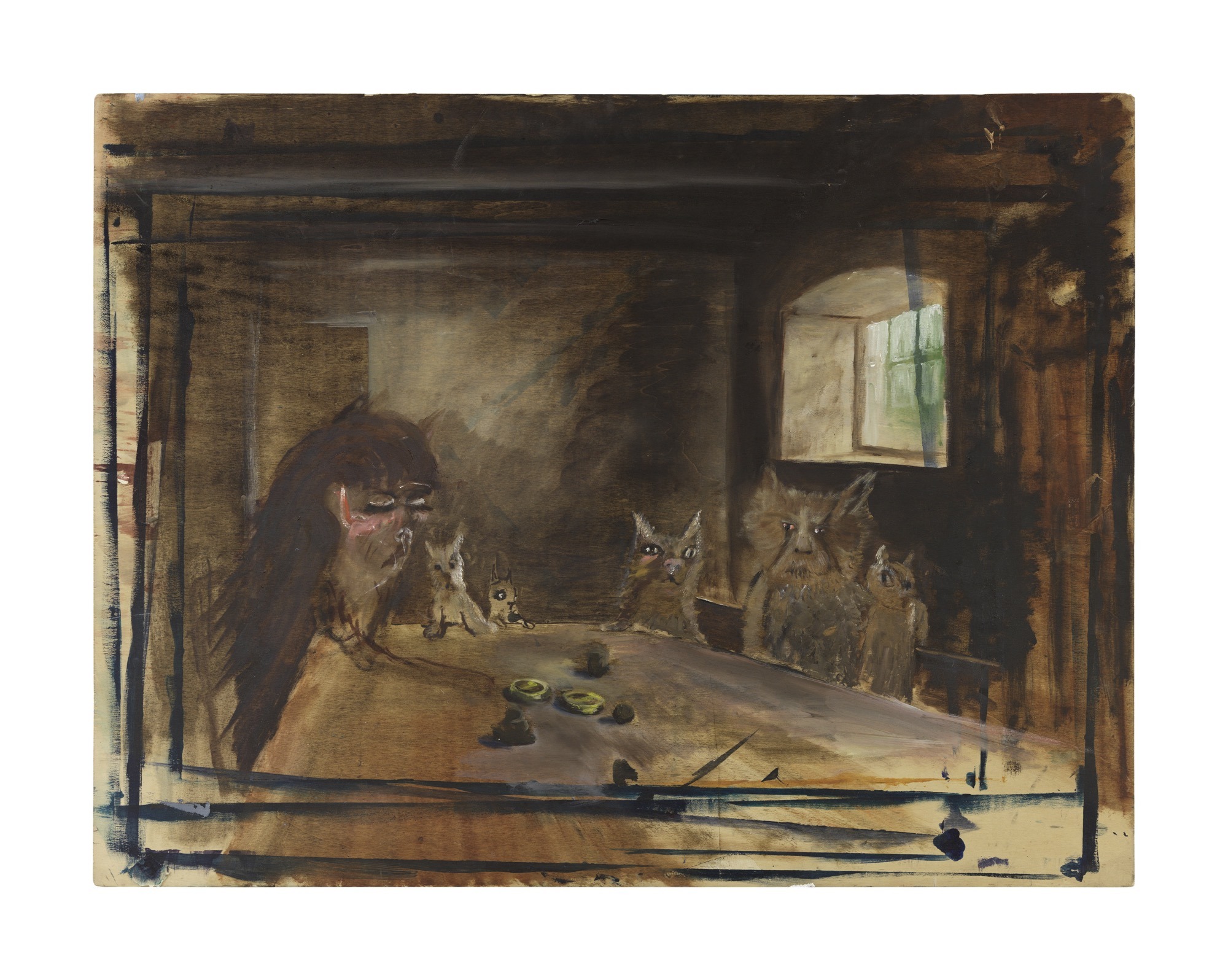 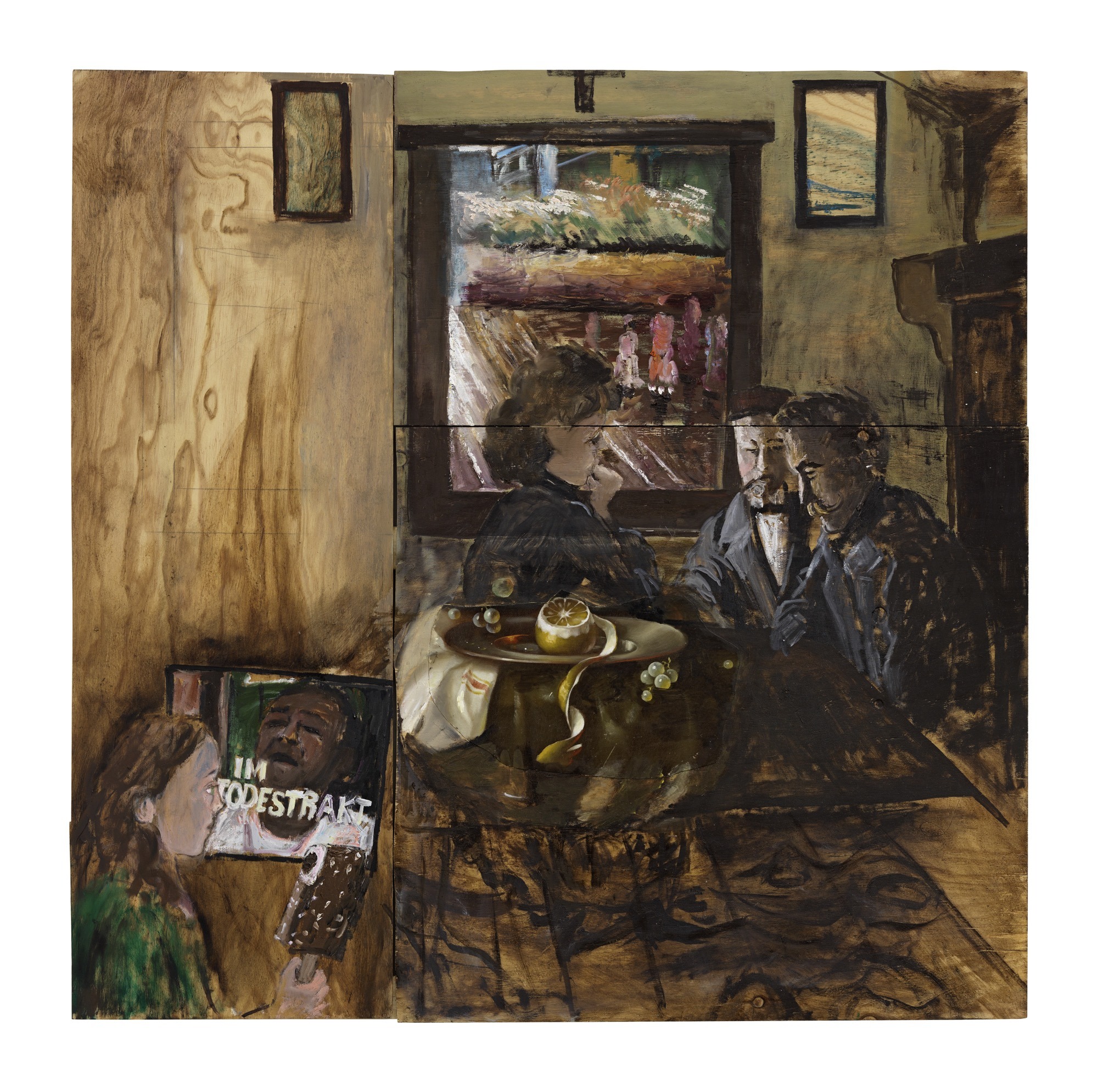 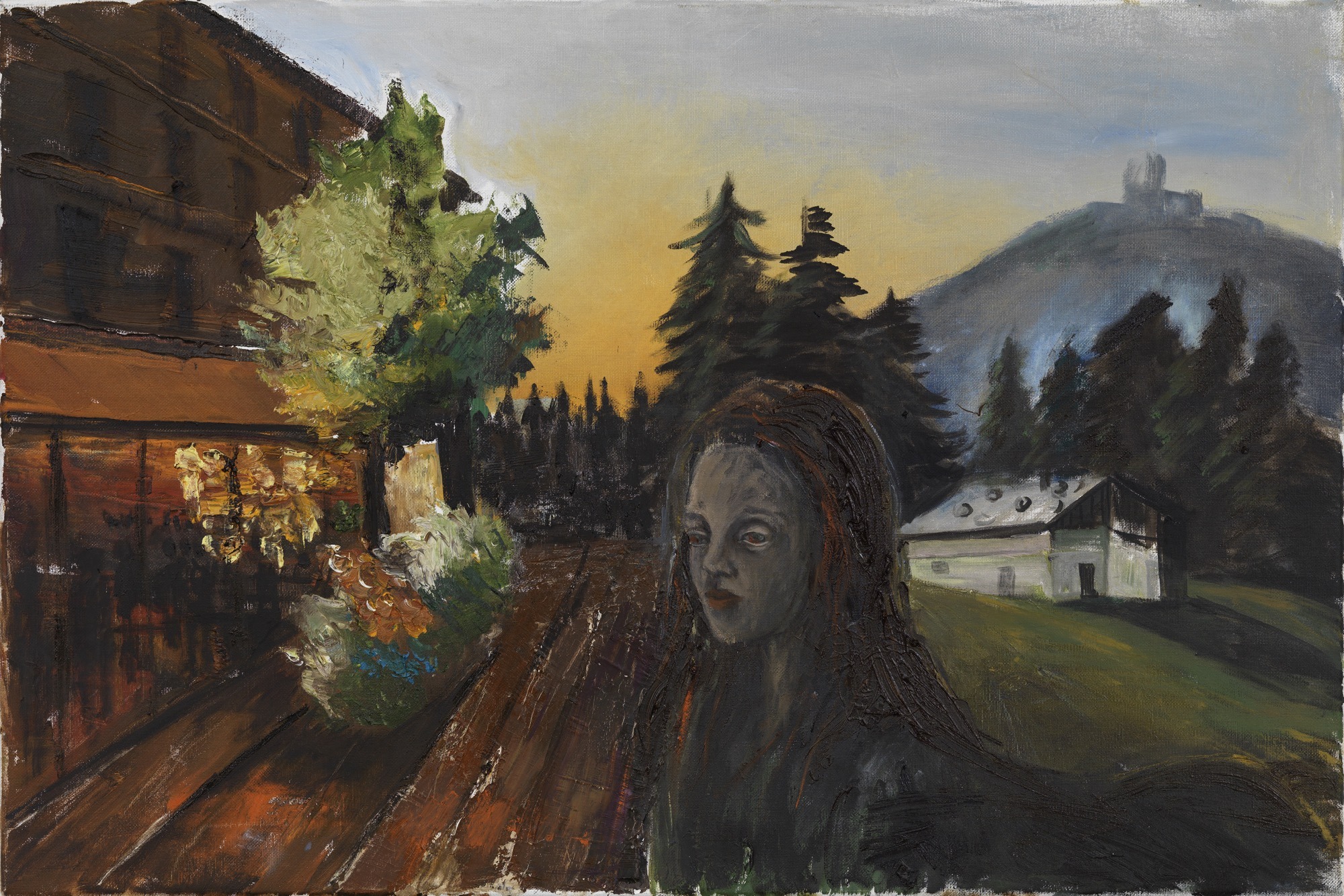 “Have you seen House of Cards yet?” Plunging into the worlds of series on the Internet has long become the norm. At any time, you can switch to one of the virtual parallel worlds in order to surrender yourself to their stories. The series are works of fiction, yet many of them seem to be astonishingly close to what is happening in the world at the moment. Retreating to those fabricated episodic narratives tends to be more comfortable than having one’s evening spoilt by discussing unwholesome events of the day.

TV fictions, personal experiences and the possibilities of painting slide together in the paintings of Amelie von Wulffen. Her works explore the potential of painting as a technique and art form, including in its variants considered inferior. Von Wulffen’s approach to painting lets surprising pictorial worlds full of abysses unfold, which remain indebted to reality even when touching on the fantastic.

In some of her 2018 works, Amelie von Wulffen references the presence of serial narrative flows that disconnect you from the world you live in, while at the same time connecting you to it. The heads in the 2018 painting Hast du schon House of Cards gesehen?, an abstract and insane psycho landscape of heads spitting at you, appear grotesque. The child’s head is sticking a finger in its mouth and nose as if to induce the gag reflex. A detail from a historical still life constitutes the resting anchor point in the swarming, flickering mass. A shiny grape is lying in the folds of a table cloth. Still lifes show things the way they look, albeit in in an exaggerated representation. They assert reality by overstating it. In many of Amelie von Wulffen’s works, the delight in illusion and symbolism makes what is depicted seem exaggerated, grotesque and sometimes uncanny. In other paintings we see girls watching series such as «On Death Row» on a notebook. Sometimes eating ice cream, they do not embody discontent yet appear as if seized by lethargy and passivity. In their disconnect, the figures avoid making contact with their environment.

Like voyeuristic time travellers we look at dinner parties with figures from an indefinite past. In the brown grained interiors, the atmosphere of confinement is expressed in silence. What we believe we see is not so much the fantasy of a rustic integrity as the oppressiveness of the hypocritical. The gaze can never be certain, though. Little appears unambiguous here.

In a number of her works Amelie von Wulffen has explored the subject of a past, rural society which may be located in southern Germany, the artist’s region of origin. The children in the paintings, who appear separated from the adult world yet at the same time connected to it, are reminiscent of the ghosts from the past whose monstrosity always remains somewhat unreal to the younger ones who only know them from the tales.

The sense of feeling entrenched or confined in family, culture and German history is evident not only in the interiors depicted in the works but also in the painted furniture such as the rustic wardrobes. Von Wulffen covers the wooden surfaces with sequences of Netflix stills, thereby waging a painterly assault on a symbolically charged heirloom piece which once served as dowry for daughters moving out of the house.

Through painting, von Wulffen looks for vanishing lines and escapes out of the state of confinement in the past, one’s own biography and, indeed, the art world. As serious as Amelie von Wulffen’s concerns are, she never gets bogged down in weighty momentousness. Through their fantastic forms her works maintain a nimble, humorous distance to what is depicted. Her comics such as Am kühlen Tisch (At the Cool Table, 2014) and her vegetable and fruit watercolours (2011–13) are at once bold and highly amusing. The artist often makes reference to images, subjects and painting styles that are part of the canon.

Von Wulffen seems to not only be fascinated with historical artists like Caillebotte, Goya, Cézanne and Dürer but also self-confidently delight in placing herself beside those painting men and adopt their painting styles in order to develop her own visual practice from them.

Her works are anything but painted rapidly, even if they sometimes pretend to be. The dense imagery and multi-layered painterly movements suggest time-consuming processes of questioning and struggle, which unfold as she is looking for images. Such a way of working may seem out of time, but not in an old-fashioned sense. Rather, Amelie von Wulffen’s works defy easy attribution to a particular present.

*Kunsthalle Bern would like to thank the city of Bern and the Federal Office of Culture for their generous support. The exhibition is supported by the No Leftovers-Fonds., the Rudolf Augstein Stiftung
and the Ruth & Arthur Scherbarth Stiftung.*
www.kunsthalle-bern.ch