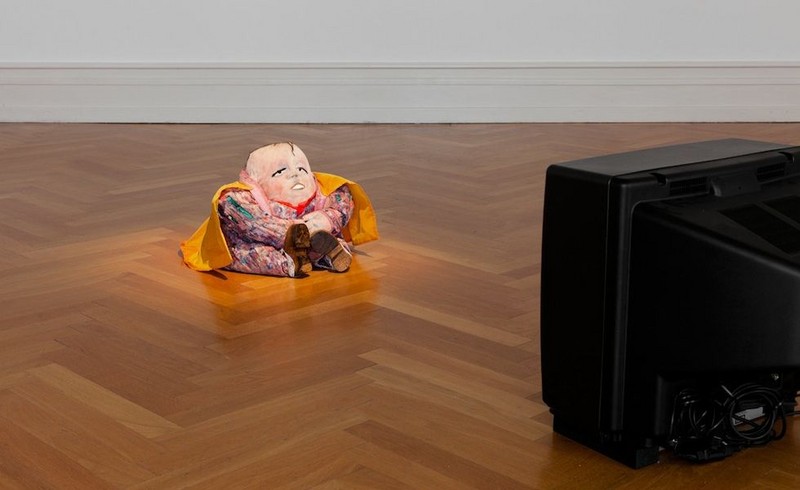 Kunsthalle Bern presents Baltiques, Denis Savary’s first comprehensive exhibition in a Swiss institution. A maker of films, sculptures, drawings, and dance performances, Denis Savary sets up complex systems of references to great poetic effect. Working with fragments of art and literary history, the artist weaves narratives of desire and unrequited love steeped in childhood fantasies and a more adult, contemplative kind of phantasmagoria. The regimen of historical quotation at play is governed by a kind of bibliophilic dérive – the aimless drift from one book’s edition to another, a protracted glide from one volume to the one right next to it.

Case in point, Maldoror, 2012, two gigantic coconut-like creatures made specifically by Denis Savary for his exhibition in Bern. The artist was perusing a Marx Ernst catalog in search of an image of a one-person sauna used to treat syphilitic patients. Instead he found a picture of a coconut-shaped water tank from Africa, which Max Ernst used as a formal reference to paint Eléphant Célèbes, 1921, and which Denis Savary remembered seeing reproduced on the cover of a paperback edition of Lautréamont’s The Songs of Maldoror. The artist bestowed a mythological and slightly anthropomorphic quality to this pair of comical sculptures. “The result stands halfway between a caricatural reminiscence of something that might have been featured in Jean-Hubert Martin’s Les Magiciens de la Terre and the decor of a Tiki Bar,” says the artist.

A certain number of scenarios reappear cyclically in Denis Savary’s work, such as, for example, tales of erotic longing, domesticity and decapitation. Alma (after Kokoschka), 2008, reproduces the surrogate doll made in 1918 by Oskar Kokoschka to stand in for the love of his life, Alma Mahler, following her marriage to Walter Gropius. Oskar Kokoschka spent a year living with this doll hoping it would console him, going as far as parading her publicly with his friends. After a year, he beheaded the doll at a party and declared his heartache over. In Kunsthalle Bern’s vestibule, all four of Denis Savary’s Almas are gathered as a pack of hairy Amazons on a break, eerily staring at a light show in a deserted nightclub (Le Must, 2004). Or consider Intimités (after Vallotton), 2007, which takes as its starting point an eponymous series of woodcuts by Félix Vallotton. These woodcuts depict scenes of domesticity between Misia Sert and her husband, Thadée Natanson, who was a close friend and early supporter of the Swiss artist as well as the publisher of La revue Blanche, an important literary periodical at the time. Yearning in silence for years on end for the affection of his patron’s wife, when the time came to break the printing plates, Félix Vallotton kept cutouts of her face. Denis Savary simply reprinted Félix Vallotton’s suite, leaving out the pieces of the image that were actually saved from destruction, thus creating a blank space where the main protagonist’s head should be.

This kind of direct and transparent repetition of his sources is taken one step further when Denis Savary simply includes other artists’ works in his exhibitions, a practice between appropriation and curating he has been cultivating since his first solo exhibitions in 2005. In a way, Denis Savary’s works aren’t so much made after anyone as with them. This modus operandi pervades his œuvre, starting with his many collaborators throughout the years from fields other than his own. These include the choreographer Delphine Lorenzo, the interior designers Juliette Roduit and Réanne Clot, the set designer Fanny Terribilini and the puppeteer Evelyne Villaime, as well as with French essayist Jean-Yves Jouannais and Swiss curator Samuel Gross. For Baltiques, his exhibition at Kunsthalle Bern, Denis Savary has invited to the playing field Peter Pan, Saint-Fond et le Petit Rose, Leda and the Swan, Diane and Actaeon – a cast of characters who all, in these very drawings by Pierre Klosowski, graced the walls of this institution back in 1981 under the tutelage of Johannes Gachnang.

Born in 1981 in Grange Marmand, near Lausanne, Denis Savary has been exhibiting his work since 2004 in institutions and exhibition spaces, such as the Galerie du Granit / Scene Nationale, Belfort (2011), La Ferme du Buisson, Noisiel (2010 / 2011), the Centre Culturel Suisse, Paris (2010), the Jeu de Paume, Paris (2008) and Mamco, Geneva (2006). In 2009 he took part in Le Printemps de Septembre at the Musée des Augustins in Toulouse, curated by Christian Bernard. For his first institutional exhibition in Switzerland, which was held at the Musée Jenisch, Vevey, in 2007 / 2008, he curated his own works alongside original paintings from Giorgio Morandi as well as pieces by contemporary fellow artists such as Francis Baudevin, Luc Andrié and Aloïs Godinat.