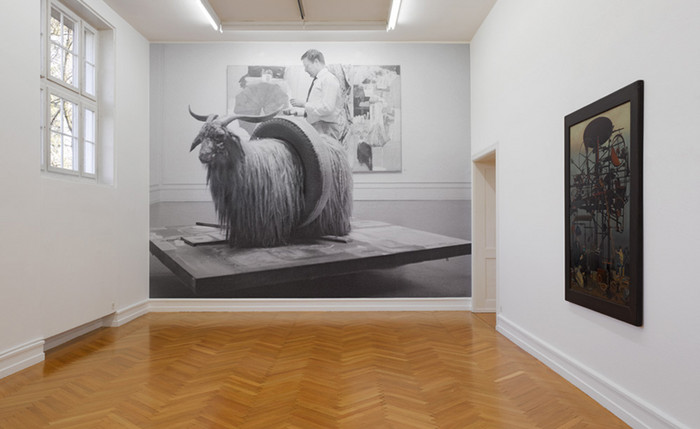 Olivier Mosset was born in Berne, Switzerland, in 1944. That fact is also the point of departure of new series of works by the seminal Swiss artist at Kunsthalle Bern. Mosset will delve into his earliest memories of the city of his childhood and bring them back in an oblique way. Resident in the United States since 1977, Mosset now lives and works in Tucson, Arizona. He moved to France in 1962. For a brief period, he was associated with Daniel Buren, Niele Toroni and Michel Parmentier. From December 1966 until December 1967, the four artists publicly expressed their desire to break with institutional structures and recognised artistic models. During the same year, Olivier Mosset created several paintings featuring the same black circle on a white ground at the centre of a 1 x 1 metre square. Between 1966 and 1974, he produced about two hundred paintings of circles. The relationships that he created among shades of colour from 1976 progressively led him towards monochrome painting. In 1977, Mosset moved to New York. For the Paris Biennale, he produced a wall-sized painting covered with a coat of red, through which could be discerned the traces of stripes in pencil; confused with the wall, the painting went unnoticed. In 1978, he met Marcia Hafif, with whom he established an artist’s group; this resulted in the exhibitions entitled New abstraction (1983) and Radical painting (1984). In 1986, Mosset participated in the Tableaux abstraits exhibition at the Villa Arson in Nice. The same year, he presented paintings with titles for the first time. Although he never belonged to the “Néo-Géo” movement, Olivier Mosset maintained relations with these artists: Peter Halley, Helmut Federle and John Armleder. In 1990, he exhibited in the Swiss Pavilion at the Venice Biennale. Olivier Mosset has collaborated on numerous occasions with such diverse artists as Andy Warhol and Steven Parrino, at the Pierre Huber gallery in Geneva in 1990; with John Armleder, who invited him to present a skateboard ramp at the Lyon Biennale in 1993; and with Cady Noland at the Migros Museum of Contemporary Art in Zurich 1999. Olivier Mosset has also produced on-site art and open-air sculptures: in Neuchâtel and Bienne, for example. In 1994, in the Sion Museum of Fine Art, he designed an installation made of cardboard that echoed – life-size – the shape of the anti-tank barriers familiarly called “Toblerones” by the Swiss during the Second World War. In 2003, Oliver Mosset presented a two-fold retrospective at the Museum of Fine Art in Lausanne and at the Art Museum St. Gallen.
www.kunsthalle-bern.ch