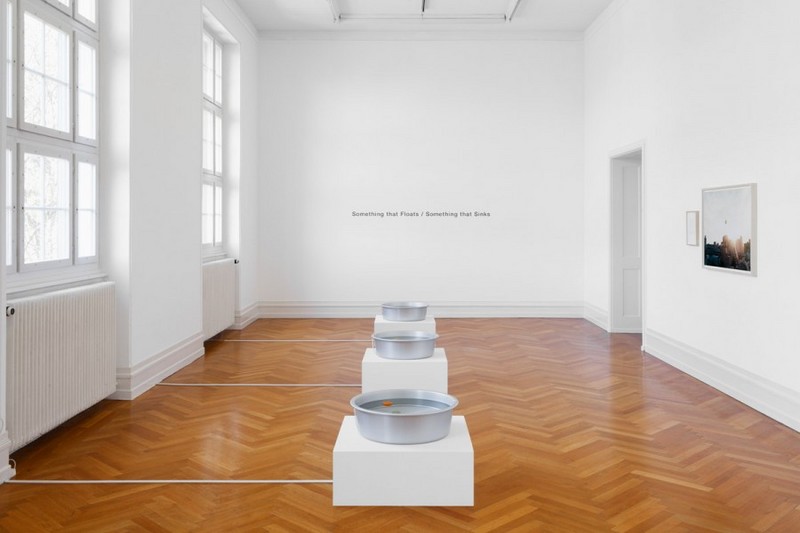 Taking on the role of a Candide-like figure, Shimabuku travels the world, interacts with strangers, and converses with nature, instigating moments of poetry, humor, and wonderment. Each of his works tells the story of an improbable encounter across borders, species, and states of being. In “Tour of Europe with One Eyebrow Shaved” (1991), the action of shaving off one eyebrow forms a catalyst for a tour through eleven European countries, where the artist’s irregular appearance becomes not only a sight for response but also a topic that initiates conversation and friendship. Similarly, in the 2008 sculptural installation “Something that Floats/Something that Sinks,” featuring fruits and vegetables circling each other (one above, one below), Shimabuku demonstrates an odd natural phenomena—certain fruits of the exact same species and even of the same plant, float, while others sink. The work is simultaneously an orchestrated dance fashioned by the invisible dynamics of density and weight.

The exhibition in Bern is conceived in two parts. On the main floor of Kunsthalle Bern, visitors encounter a wide cross-section of the artist’s oeuvre from 1991 to 2013, including videos, sculptural installations, performance documentations, and photography. In each work, the marvelous emerges serenely out of the mundane: Shimabuku’s world is unmistakably our own. The presentation on the lower level is titled “With Octopus.” Covering the same period of the artist’s activities, it brings together a range of works made with this mollusc. Included is a written account of his 1990 “exhibition” of a dead octopus in his refrigerator in San Francisco, a 2010 group of colored glass sculptures “for” octopuses, as well as the film documenting his iconic visit to the Tokyo fish market with a live octopus before returning it to the sea (“Then, I Decided to Give a Tour of Tokyo to the Octopus from Akashi,” 2000). Shimabuku has continuously engaged with this superiorly intelligent and profoundly alien creature as a model of interaction with art, the world, and each other.

Shimabuku was born in 1969 in Kobe, Japan. He lives and works in Berlin. “Flying Me” is Shimabuku’s first large-scale exhibition in a Swiss Institution.

Gelateria die Berna will present Shimabuku “Ice Cream With Salt / Ice Cream With Pepper” (2008) in front of the Kunsthalle during the opening and in its shops until the end of the exhibition.
http://www.gelateriadiberna.ch

“Flying Me” is part of the 150-year anniversary of diplomatic ties between Switzerland and Japan. The exhibition was produced in collaboration with Ikon Gallery in Birmingham and the Vancouver Contemporary Art Gallery. It is curated by Fabrice Stroun and Tenzing Barshee and has been made possible thanks to the generous support of Kultur Stadt Bern and Burgergemeinde Bern.
Kunsthalle Bern and Shimabuku would like to thank Jonathan Watkins and Stuart Tulloch from Ikon Gallery, Nigel Prince from the Vancouver Contemporary Art Gallery, Vorwerk&Co.Teppichwerke, Atelier für Videokonservierung GmbH, Kunstmuseum Bern, as well as Florence Bonnefous und Amanda Wilkinson.
www.kunsthalle-bern.ch