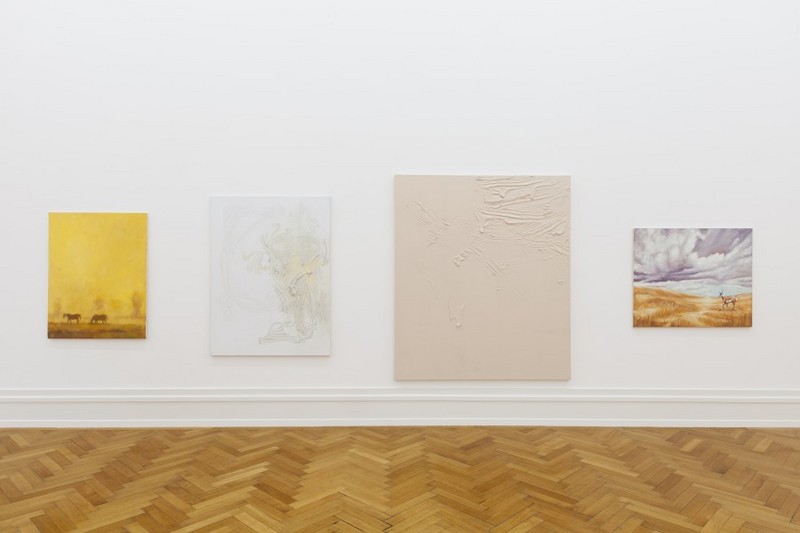 Ull Hohn’s final paintings and drawings, created in 1994 and 1995, are based on works from his youth and are titled Revisions. The differences between the originals and the new versions are often hard to discern, though Hohn did choose a bigger format for some of the Revisions, or rendered the paintings’ figurative motifs more distinctly. Returning to works made before his artistic education, Hohn – who died aged 35 in 1995 due to AIDS-related complications – marks a kind of endpoint to his career by suggesting a scrutinizing, retrospective glance at the productive trajectory of his life. His Revisions also serve as reflections on his own history and on the relationship between the process of ‘becoming an artist’ and the state of ‘being an artist’, considering his youthful autodidactic phase as well as early influences from various teachers and institutions.

From 1980 to 1984, Hohn studied at the Hochschule der Künste in Berlin, and from 1984 to 1986 he was a Meisterschüler under Gerhard Richter at the Kunstakademie Düsseldorf. In late 1986, he moved to New York to participate in the Whitney Independent Study Program (ISP). This step was motivated by Hohn’s wish for a change of perspective. The German discourse on painting, which at the time mostly focused on questions intrinsic to the medium itself, appeared limited to him. The ISP in contrast, promised a more theoretically informed perspective on art that considered its political potential and the social conditions of artistic production. In New York, Hohn developed an approach to pictorial traditions that focused on questions of the representation of (homo-)sexuality. This interest in the representation of his own homosexual desire emerged in the context of the debates that shaped the American ‘culture wars’ of that time – the reactionary backlash of the 1980s and the ideologically motivated misrepresentation of the AIDS-crisis.

Hohn invoked traditional painterly issues, such as the dichotomy of abstraction and figuration or the iconographic and motivic topoi of landscape painting, which serve to articulate distinct conceptions of ‘nature’ and ‘the natural’. Yet there is a consistent sense of ambivalence to his work; for example he treats his references from an explicitly homosexual perspective or uses images and instructions by the popular ‘TV painter’ Bob Ross, invoking Ross as a teacher who lacks any art historical legitimization. At a time when painting was often considered to be too self-involved and lacking in discursive potential, Hohn explored ways to think of the medium both aesthetically and conceptually, emphasising the interrelations between artistic subjectivity and a tangible sensibility, as well as the socio-historical conditions of painting.

Kunsthalle Bern previously showed a small selection of Hohn’s paintings in the context of the group exhibition Raw and Delirious in the summer of 2015. It now presents the first retrospective of Hohn’s work in Switzerland, in collaboration with the art historians Magnus Schaefer (New York) and Hannes Loichinger (Hamburg/Vienna). The exhibition is organized around a number of themes that informed Hohn’s work, and will be accompanied by a selection of printed matter and archival material outlining its historical and theoretical background.