Editing, Design, Production and Distribution of Independent Swiss Magazines since 1960 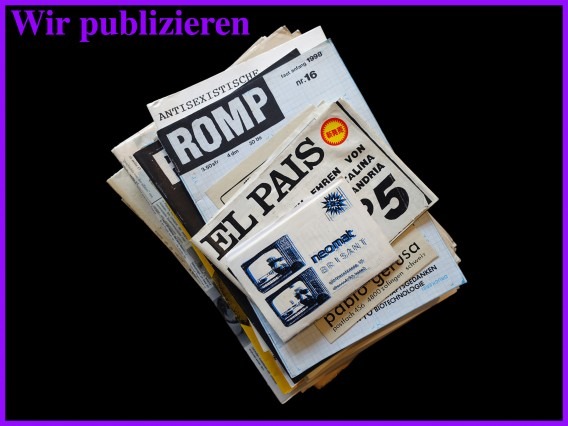 Self-publishing has become a common feature of the digital age. Most online content can now be shared by a simple click on the upload button. At the same time, our control of social media and their infrastructure is much diminished, as is our control of any elements that are essential to a considered publishing practice. Against this backdrop, numerous exhibitions and the rise of new independent bookshops illustrate renewed and increased interest in short-run print media and/or underground networks. Of great importance in this context are fundamental decisions about the design, formatting and distribution of printed publications.

The exhibition, Wir publizieren, is a joint research project of the School of Art and Design at the University of the Arts Bern (HKB) in Switzerland, and of the Art and Design Department at the University of the Arts Bremen in Germany. Focusing on independent, collective practices in publishing, reproduction and distribution, the exhibition follows on to Unter dem Radar. Underground- und Selbstpublikationen 1965–1975. The show was presented at the Weserburg in Bremen in 2015/16, with a substantial companion publication issued by Spector Books in 2017.

The project, WIR PUBLIZIEREN, draws on an archive of independent and mostly Swiss publications from the 1960s onwards, which has been created, curated and studied at HKB. The archive contains magazines produced and published by young people, designers, artists, and social agitators termed Bewegte, who explored ways of sharing their thoughts without applying any professional filters. Little consideration, if any, was given to target audiences or mainstream mediation and dissemination methods, leading to unconventional and idiosyncratic topics and treatments of many texts in magazines such as Hofnachrichten, Eisbrecher or Alpenzeiger.