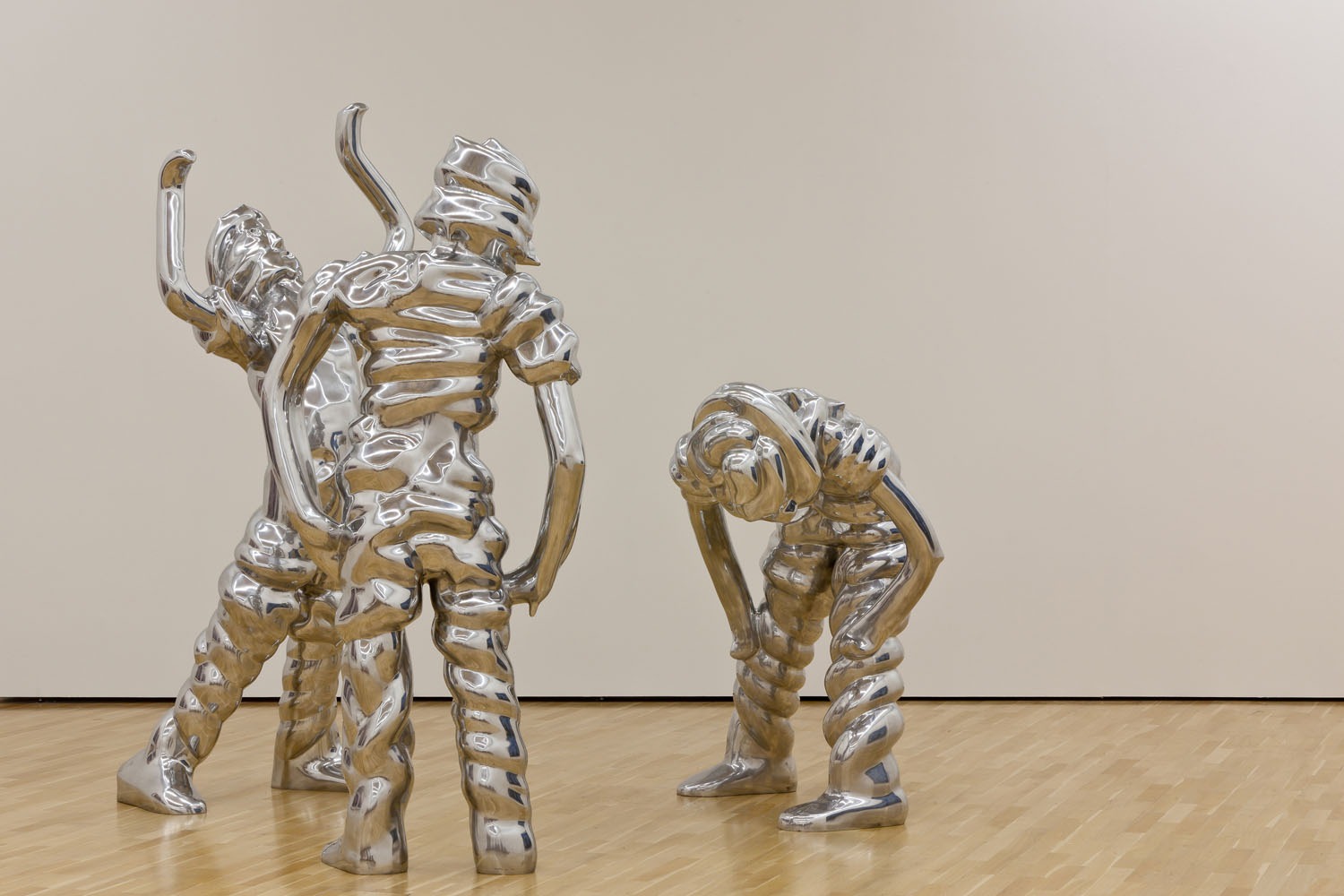 The Kunsthalle Bielefeld’s exhibition of L’homme qui marche – Verkörperung des Sperrigen in the winter of 2019-20 is dedicated to sculpture. Starting with major pieces from our own sculpture collection and supplemented by first-rate works on loan, the show, which runs from November 9, 2019, to March 8, 2020, deals with sculpture’s embodiment of volume from the classic modern era to the present time, from Rodin to today. From the late nineteenth century onward, when Auguste Rodin finally invalidated the type of beauty idealized in the canon of ancient classical sculpture, the forms of sculpture that have continued to emerge always deal with the discrepancy between the traditionally “beautiful” and the increasingly “awkward or difficult,” in the sense of the abstract, the incomparable, and the visually contradictory.

In 1877-8 Auguste Rodin created what is now considered a trailblazing sculpture, L`homme qui marche (The Walking Man). It is considered a turning point in the history of sculpture, because Rodin declared a new paradigm through it, in which an incomplete, unfinished, or “imperfect” piece could be regarded as a full-fledged work of art. Moreover, he assembled this work from fragments of previously made sculptures. Essential sections of the walking figure’s legs can be traced back to Rodin’s Saint John the Baptist (1880), while the torso comes from studies for the Porte de l ́enfer (Gates of Hell). All of this helped in overcoming the ideas of nineteenth-century sculpture and its obsession with ancient classical concepts. In its place arose a new kind of artistic freedom that would go on to influence the entire twentieth century. Subsequently, what Wilhelm Lehmbruck called the “eternal humanity of sculpture” found new forms and expressions.

For centuries “perfect” sculpture represented the heroic. Rulers recognized that the durability of bronze and marble made them useful for memorials. Rodin broke with this tradition, thinking of his figures as plastic presences, as equal counterparts. As a direct consequence of Rodin’s work, Wilhelm Lehmbruck used the torso to make a basic artistic postulate. In 1971 the Kunsthalle Bielefeld acquired Germaine Richier’s Don Quixote (1950-1). It focuses attention on an alternative to the classical topos, one borrowed from literature. Richier made this plastic out of found pieces, such as old branches and bits of wood that resemble driftwood, then assembled them into a fragile figure.

Since the 1959 documenta at the latest, abstract sculpture (as opposed to the figurative) has been key, even though figurative sculptures continue to be produced. The 1960s and 1970s were the years of “expanding the concept of art” in the United States and western Europe. As far as sculpture is concerned, female artists especially represented an attitude that stood counter to the idea that sculpture is a self-contained, closed concept. Joseph Beuys established the “social sculpture.” A poster from 1970, La Rivoluzione siamo Noi, shows a frontal view of him in the role of revolutionary and vanguard, striding toward the viewer. The artist presents himself as the embodiment of the progressive avant-garde. Bruce Nauman also uses his own body as creative sculptural material. In his video Slow Angle Walk (Beckett Walk) from 1968, he paces out the measurements of his studio’s interior. The body chiseled in stone or cast in bronze from the 1940s and 1950s has been figuratively replaced by the artist himself as actor. New materials also gained admittance to the field of sculpture, while viewers were encouraged to be active participants. The figurative sculpture that has survived from this period consists mainly of images on video, film, and photography.

It was not until 1980 that the artist’s signature reappeared in a manifest way. In 1984 the director of the Kunsthalle at the time, Ulrich Weisner, acquired Georg Baselitz’s Blauer Kopf (Blue Head; 1982) for the Kunsthalle Bielefeld’s collection. It was the first German museum to purchase a sculpture by Baselitz. In 1980 Klaus Gallwitz, then the director of the Städel Museum in Frankfurt am Main, nominated Baselitz and Anselm Kiefer to design the German Pavilion at the Venice Biennale. Known as a painter, Baselitz exhibited his first plastic, Modell für eine Skulptur (Model for a Sculpture), introducing a new kind of figurative work that can also be interpreted as a rejection of the dominance of abstract, conceptual works of art. Baselitz firmly fixed the sculpture within the process of its creation, showing the figure emerging from out of a four-cornered block. Like Rodin’s L’homme qui marche, the unfinished, the imperfect, is perfect and complete here.

With their gleaming, polished, silvery surfaces, Thomas Schütte’s Große Geister (Great Minds) convey the impression that they are solids made of fluid material. Only their rough silhouette looks human; their eyes and mouths are black holes, some of them distorted. These figures, which resemble sci-fi characters or creatures from outer space, have a playful attitude. In their bent positions, abrupt turns, or with arms flung upward, they deviate from any kind of pose found in classic figurative sculpture.

Wiebke Siem’s untitled sculpture consists of two, four-meter-long arms made of black fabric hanging from the wall, jutting far out into the space and practically embracing the viewer, as it were.

Asta Gröting’s Space between Four People turns life-sized negative casts of her closest family members into a circle. She is concerned about what is in between and what is left unsaid in human relationships.

In contrast, Pia Stadtbäumer’s sculptures are, at first glance, exact reproductions of human bodies, which she positions in space as if they were objects, with grommets affixed to their heads so that they can be tied to the ceiling with a cord.

Lena Henke’s piece, Ayşe Erkmen’s Endless Knee (2018) is an abstract translation of two crossed knees covered in brilliant green plastic granules. Not only can the sculpture be displayed outside, it can also be rolled around so that it intervenes in its environment. The title of the work alludes to the former professor at the Städelschule, whose large, site-specific interventions and installations are still an exception in this male-dominated field of art, and which influenced Henke while she was a student in Frankfurt.

The exhibition is sponsored by the Stiftung der Sparkasse Bielefeld.

A catalogue with essays by Chris Dercon, Ulrich Wilmes, Jutta Hülsewig-Johnen, Henrike Mund, and Friedrich Meschede will be published. The catalogue is financed by the Förderkreis der Kunsthalle Bielefeld e.V.