The Quest for Happiness in Art: Expressionism and Abstract Art around 1914 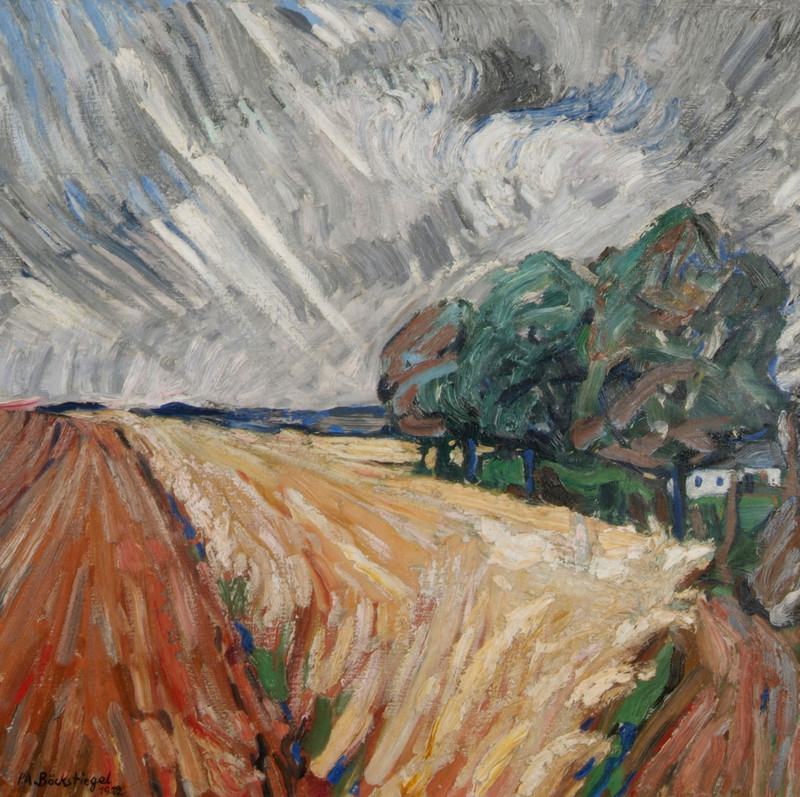 The Hölzel Circle up to 1914 – an exhibition at the Kunsthalle Bielefeld in 1974—initiated what is now known as the Bunte Collection. Now, forty years later, the Hermann-Josef Bunte Collection links Westphalia with southern Germany. At the heart of the collection—which spans the arc from Westphalian Expressionism to the Stuttgart avant-garde around Adolf Hölzel—is Hermann Stenner, a native of Bielefeld. His works make up the core of the Bunte Collection, which is primarily devoted to maintaining and researching his oeuvre. In the meantime the collection has become the largest private collection of Stenner’s work anywhere.
Besides Peter August Böckstiegel, the Westphalian roots are represented by artists such as Hermann Freudenau, Ernst Sagewka, and Victor Tuxhorn, the group of “Bielefeld Modernists” that formed when the Modernist-oriented school for arts and crafts was founded in 1907 in the city. The group also served as the first artistic breeding ground for the young Hermann Stenner. Over the five short years of his career, before he fell on the Eastern Front in Russia in 1914 at the age of just 23, Stenner’s work achieved an astonishing artistic maturity. “He would have become the best painter in Germany,” wrote his fellow art student, Willi Baumeister, looking back at the family in 1950.
Aside from the enlightening comparison between the Expressionistic formal vocabulary predominant in northern Germany and the path toward abstraction taken in southern Germany, the Bunte Collection also traces Stenner’s artistic career within a context of teachers, comrades, and fellow artists, as represented by the works of Peter August Böckstiegel, Christian Landenberger, Johannes Itten, Ida Kerkovius, Willi Baumeister, Oskar Schlemmer, and Adolf Hölzel.
A century after World War I began, the Kunsthalle Bielefeld also remembers the artists killed in the war, such as August Macke (†1914), Franz Marc (†1916), Wilhelm Morgner (1917), Franz Nölken (†1918), Hermann Stemmler (†1918), Hermann Stenner (†1914), and Josef Alfons Wirth (†1916).
The exhibition features more than 250 works from all genres: paintings, watercolors, drawings, prints, and sculptures on both floors of the Kunsthalle Bielefeld. It is sponsored by the Kulturstiftung pro Bielefeld.
www.kunsthalle-bielefeld.de