Last Year in Marienbad: A Film as Art 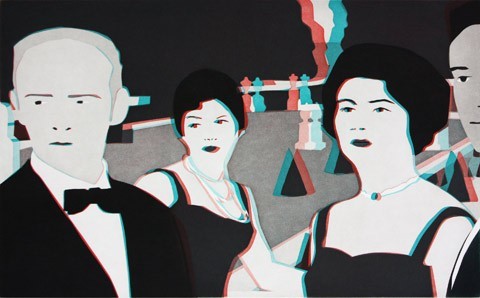 The 1961 film "L’Année dernière à Marienbad" (Last Year in Marienbad) directed by Alain Resnais wrote history: More radically than any previous film, Resnais’ cinematic adaptation of Alain Robbe-Grillet’s avant-garde nouveau roman broke with traditional structures of time, place and causality. This ultramodern pioneering work plays with an artistic language in which the style itself becomes the content alongside geometrical forms, architectural lines and repetitive basic compositional principles. Internationally acclaimed, the Marienbad film not only influeced directors such as Stanley Kubrick, Peter Greenaway, David Lynch and Lars von Trier, but also defined an understanding of art that has affected all artistic areas and one that remains relevent to the present day.

The exhibition "Last Year in Marienbad: A Film as Art", conceived by the Kunsthalle Bremen, demonstrates for the first time how influential the Nouvelle Vague aesthetic that distinguishes the Marienbad film has been on the visual arts and will provide visitors with an understanding of its lasting international relevance. To illustrate this, the Kunsthalle Bremen will bring together exceptional international exhibits in video, animation, and installation art as well as paintings, drawings, sculptures, photographs and architecture which will be supplemented by examples from pop culture and fashion from the beginning of the twentieth century to the present day.
www.kunsthalle-bremen.de