Sometimes it gets out of hand and turns into music 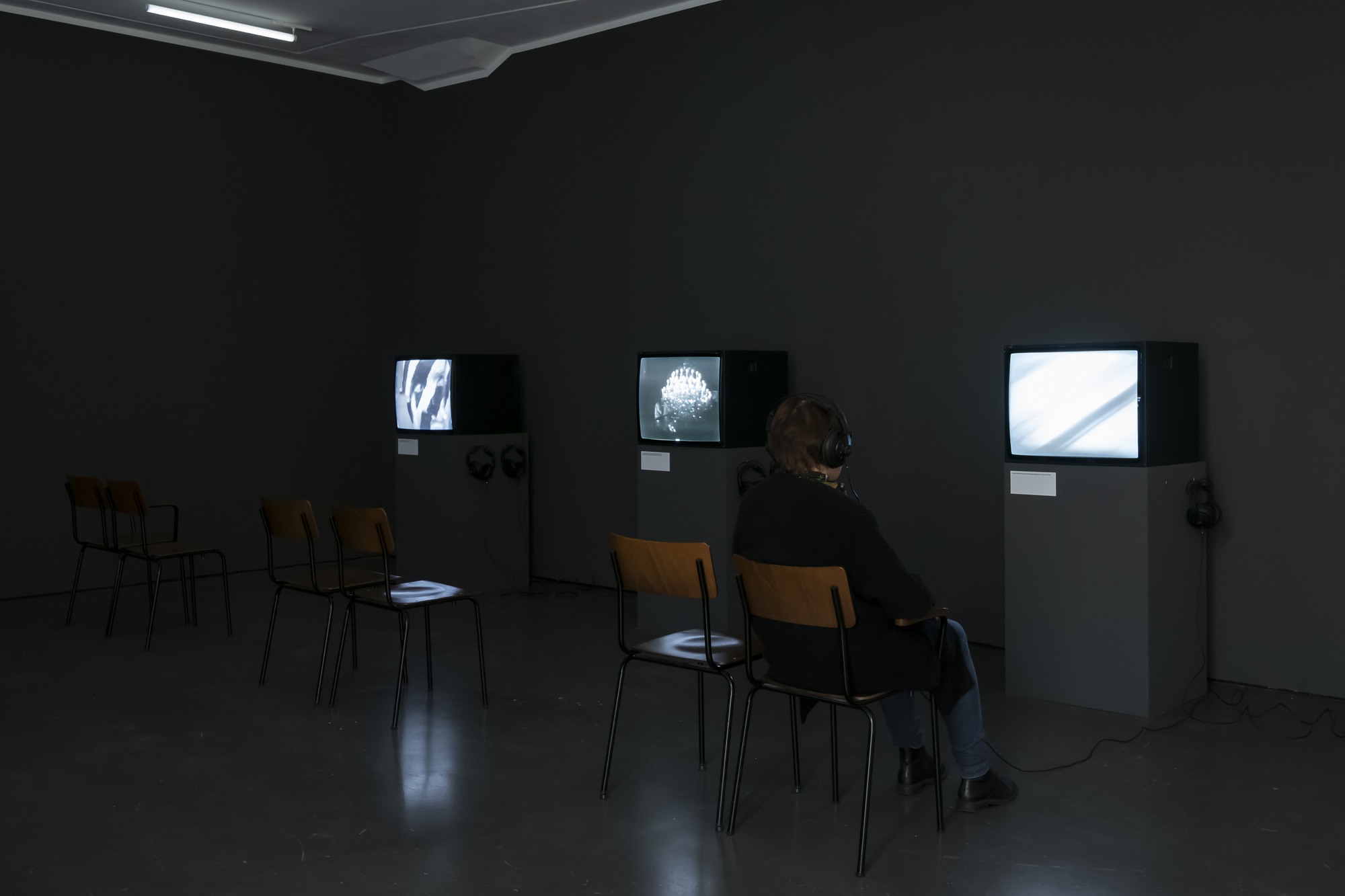 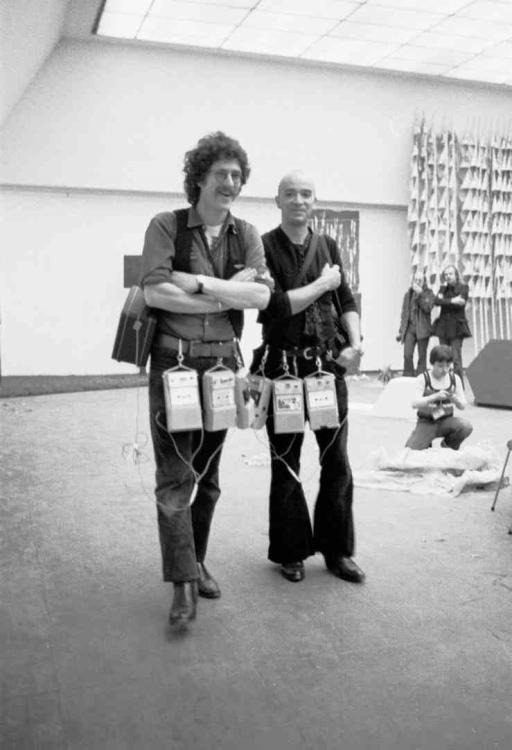 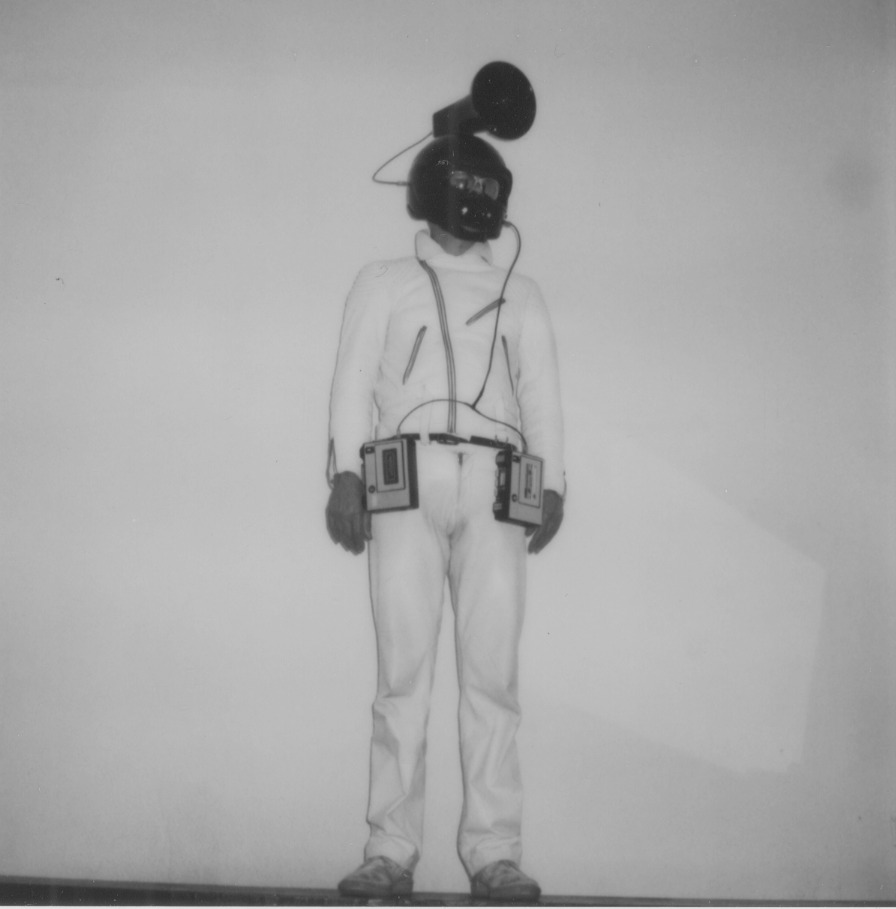 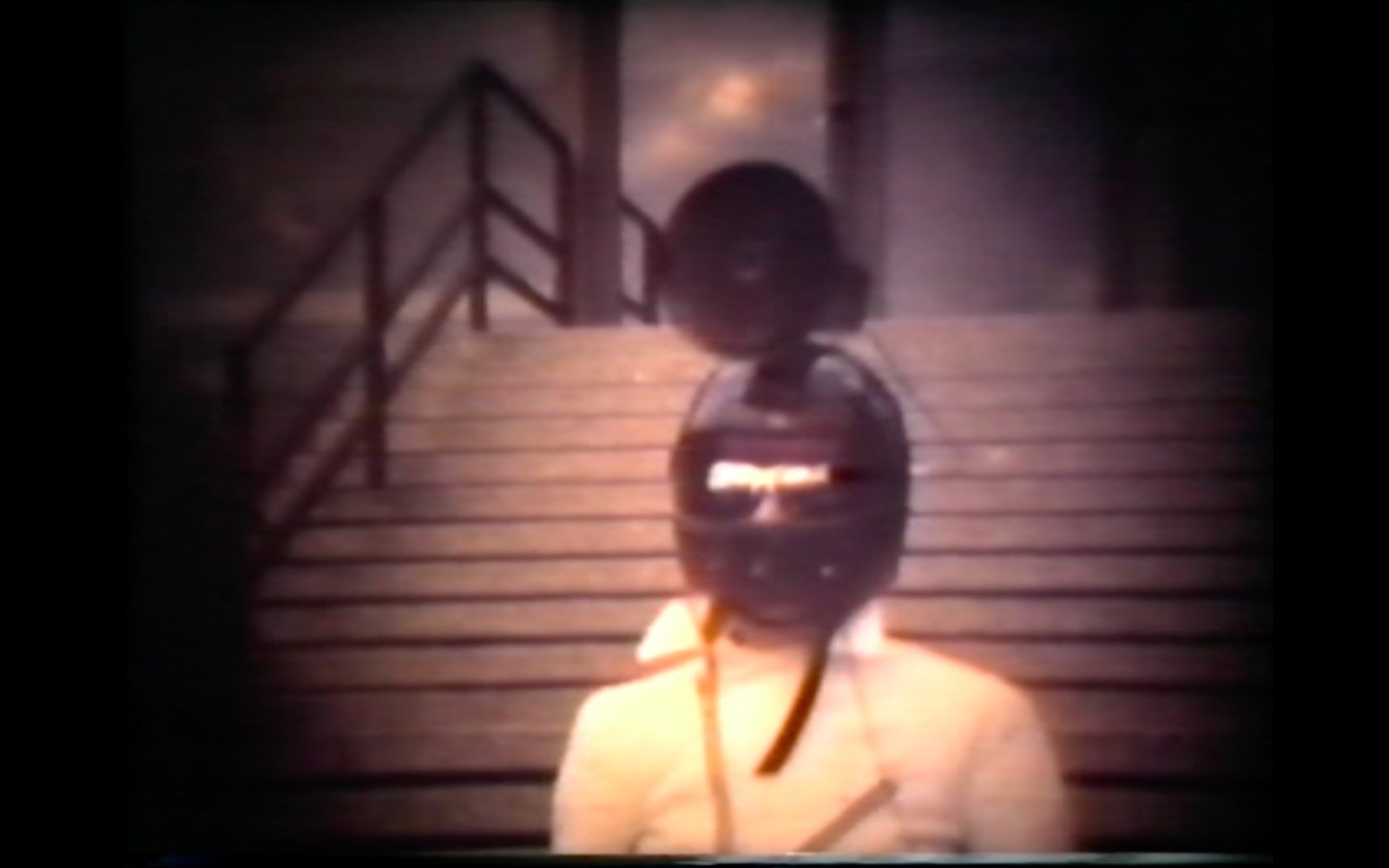 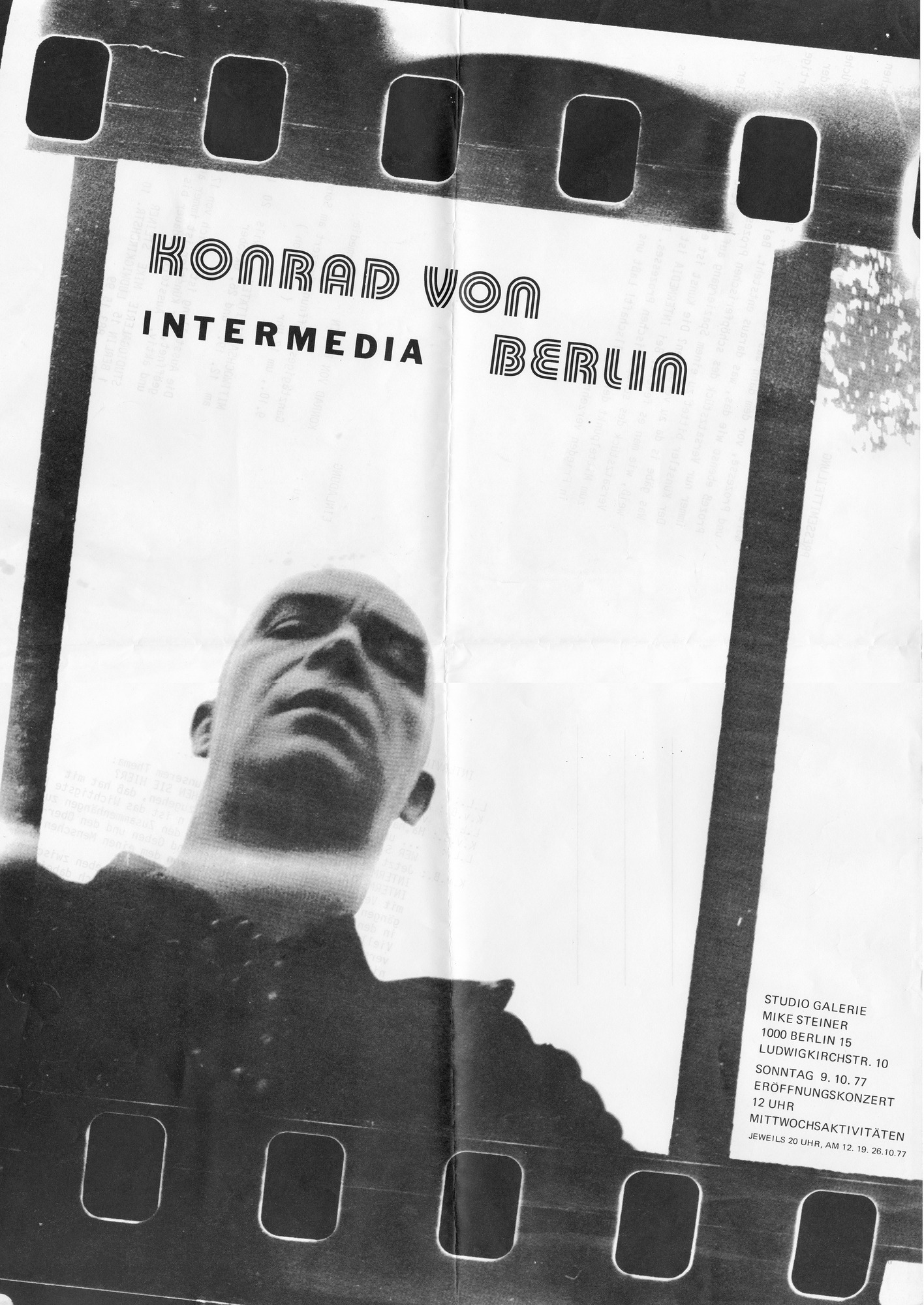 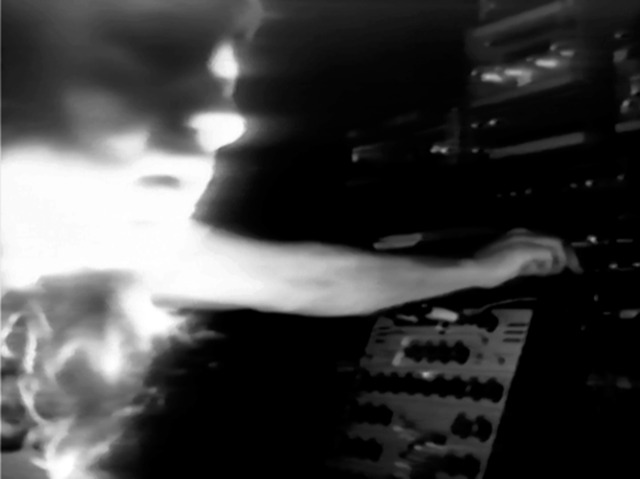 Ulrike Rosenbach und Konrad Schnitzler, Videokonzert-Improvisation, 1973, Videostill. © Ulrike Rosenbach, 2022
The project Conrad Schnitzler: “Sometimes it gets out of hand and turns into music”, a joint undertaking by the Kunsthalle Düsseldorf and the IMAI Foundation – Inter Media Art Institute, includes an exhibition, a festival, and a publication whose aim is to survey and reevaluate the extensive oeuvre of Conrad Schnitzler (*1937 in Düsseldorf, †2011 in Dallgow).

Conrad Schnitzler has been internationally renowned among specialists as a pioneer of electronic music since the 1970s. Now this exhibition in his hometown is showing his “intermedia” work from the 1970s and 1980s for the first time. During this period, Schnitzler, who was a student of Joseph Beuys in Düsseldorf, developed into the video and performance artist “Konrad von Berlin” and finally into the internationally connected sound artist and music producer Conrad Schnitzler.

For Schnitzler, “intermedia” meant working between media with simple technical tools. He did not treat his sound and video works as finished works, but as intermediate stages, set pieces, or momentary states that would reveal their potential in a continual series of new audiovisual constellations. He highly valued the political, economic, and artistic independence of his work. This exhibition shows a selection of videos, concerts, performances, installations, vinyl records, and limited-edition cassettes that illustrate Schnitzler’s very particular path between visual art, electronic music, and artistic autonomy.

As part of the festival, Schnitzler and his companions will be juxtaposed with
contemporary musicians and artists. Schnitzler’s companions Wolfgang Seidel (Germany), Bernd Zimmer (Germany), and Ken Montgomery (United States) will present “cassette concerts” from the 1970s and 1980s in which they arrange the sounds recorded by the artist on cassette across space and time. There will also be concerts by musicians from all over the world whose work was inspired by Conrad Schnitzler or makes reference to him. The concerts and performances by Keiko Yamamoto (UK), Billy Roisz (Austria), Razen (Belgium), Noemi Büchi (Switzerland), Nika Son (Germany), Tolouse Low Trax (France), and Cengiz Mengüç (Netherlands) will connect Schnitzler’s work to the present. The first stage of the festival will take place from 10 to 25 June 2022, and the second stage from 12 to 14 August 2022 at the Kunsthalle Düsseldorf.
Participating artists: Conrad Schnitzler, Noémi Büchi, Cengiz Mengüç, Ken Montgomery,
Ulrike Rosenbach, Wolfgang Seidel, Nika Son, Tolouse Low Trax, Keiko Yamamoto, Billy Roisz, Bernd Zimmer, Razen, and many more

The exhibition is curated by Stefan Schneider (musician, Düsseldorf) and Linnea Semmerling (IMAI Foundation – Inter Media Art Institute) with Gregor Jansen and Alicia Holthausen (both Kunsthalle Düsseldorf).
In 2023, the first monograph about Conrad Schnitzler’s work will be published (in English, approximately 200 pages with 50 illustrations).

1937: Born as Konrad Schnitzler in Düsseldorf, father was a German journalist and amateur musician, mother was an Italian housewife.
1945 – circa 1948: Escape and asylum in Baden near Vienna, Austria. After returning, he grew up with his grandfather in Düsseldorf.
Starting in 1953: Apprenticed as a machinist at Rode und Dörrenberg in Düsseldorf. First encounters with jazz and electronic music on the radio (Herbert Eimert and Joachim-Ernst Berendt) and at night school.
Starting in 1955: Stoker on the ship Wilhelm Bornhofen.
1961–1962: Studied at the Kunstakademie Düsseldorf, one semester in Zoltan Székessy’s class, two semesters in Joseph Beuys’s class.
1962: Married the actress Christa Runge.
1963: Moved to West Berlin, daughter Katharina born.
1964: Birth of son Gregor. 1966: Birth of son Marten.
1968: Founded the experimental music center Zodiac Free Arts Lab with Hans-Joachim Roedelius and Boris Schaak.
1969: Founded of the group Kluster with Hans-Joachim Roedelius and Dieter Moebius.
1970: Concert with Kluster at the Kunstverein Düsseldorf.
1970: Assisted with the recording of Tangerine Dream’s debut album Electronic Meditation.
1970: Installation in the exhibition series Akustische Räume at Galerie Block in West Berlin. 1970–1971: Temporarily returned to Düsseldorf for studio recordings with Kluster for Klopfzeichen and Zwei-Osterei, produced by Oskar Gottlieb Blarr and Conny Plank. 1971: Release of Schwarz (private release). Recording of Eruption, the last concert by the original members of Kluster in Göttingen. After their separation in 1971, Schnitzler continued his sound experiments on his own based on the concept of Kluster.
1970s: Performances on Ku’Damm in Berlin with “sound helmet” and cassette recorders.
1972: Divorce from Christa Runge.
1972: Release of Rot (first as a private release, then in 1973 with Edition Block), his first solo album with only electronic instruments.
1972: Performance as part of the exhibition Berlin Scene at Gallery House in London. 1973: The Red Cassette (private release). The sounds on this cassette formed the musical basis for the track “Zug“ on the album Con (1978).
1974: Release of Blau (Edition Block).
1974: The Black Cassette (private release, later released on vinyl in 1981 as Gelb by Edition Block).
1974: Release of Work in Progress (Edition Block), edition of 100 cassettes of a 50-hour concert at Galerie Block, as a box set with one cassette featuring an excerpt of the concert, a graphic score, and the records Schwarz, Rot, and Blau.
1977: Performance at the exhibition Berlin Now at the Goethe-Institut in New York.
1977: Performances at Studiogalerie Mike Steiner, West Berlin.
1978: Release of Con, first professional studio recording with international distribution by the French label Egg, produced by Peter Baumann, first release under the name Conrad Schnitzler.
1980: Performance at Ars Electronica in Linz, Austria.
1980: Performance by Con-Lux with Folke Hanfeld at Für Augen und Augen, Akademie der Künste, West Berlin.
1980: Publication of Consequenz with Wolfgang Seidel.
1981: Release of Gelb (Edition Block) with material from the 1970s, some of which had already been released in 1974 as The Black Cassette.
1981: Release of Grün (Edition Block) with material from the 1970s.
1981: Performance as part of the exhibition Art Allemagne Aujourd’hui, Center George Pompidou, Paris.
1981–1982: Guest lecturer at Hochschule für Bildende Künste in Hamburg.
1989: Performance at Generator Sound Art Gallery, New York.
1989: Performance at The Kitchen, New York.
1989: Release of Constellations, first release on CD.
Starting in 1990, his releases no longer had titles, and instead were numbered, starting with 90/1. In 1991 he started using a consecutive numbering beginning with 00/014. 1994: Married the English, art, and drama teacher Gisela Carstensen, his partner since 1980.
1994: Performance at Roulette Intermedium by Ken Montgomery, New York.
2003: Release of Gold with material from the 1970s.
2008: Initiated the Global Living Project, for which he sent his DNA around the world.
2009: Release of Silber with material from the 1970s.
2011: Died in Dallgow.