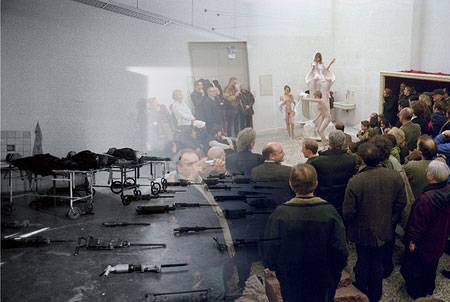 Alongside her activities as an artist, the sculptor Irmin Kamp has been working for the past thirty-three years as a highly engaged professor at the Kunstakademie Düsseldorf. More than 160 students have attented her classes during her tenure at the Kunstakademie. The exhibition gives in a richly facetted overview of both the diversity and the ever-recurring parallels in the mostly sculptural positions, which have emanated from the »Klasse Kamp« over the years. Thirty-two artists have been selected to participate, including the internationally renowned Christoph Büchel und Bogomir Ecker, as well as young talents, such as Luka Fineisen and Simon Schubert, not to mention rediscovered positions, such as that of Sybille Berke, who died in 1998.
By directing attention to one of the longest-standing, most single-minded classes in the Kunstakademie Düsseldorf, this exhibition underlines in exemplary fashion the important, well-established and fruitful collaboration which exists between the Kunstakademie and the Kunsthalle. Between artists of world renown and the new up and coming positions, the whole gamut of artistic creation during the past thirty years-sculpture in particular-is opened up: from figurative sculpture via abstract language of form to conceptual interpretations of sculpture, from performance and media art to localised installations and sculptural interventions in public spaces, hardly an artistic approach is left unturned in this exhibition. Nevertheless, many artists are not merely connected by the fact that they studied together under Irmin Kamp, but also by a particular way of seeing tutored during the time at the Academy and which is apparent in both a sensitivity in handling materials and a determined engagement with the properties of space. The exhibition concentrates upon the current works of the participating artists, but also makes reference to artistic developments, which were fashioned by successive years of the Klasse Kamp.

The exhibition will be accompanied by a further six events (film evenings, artists presentations, concerts, discussions), all of which will be advertised separately.

A full catalogue on the exhibition Klasse Kamp will be published by the Richter Verlag.