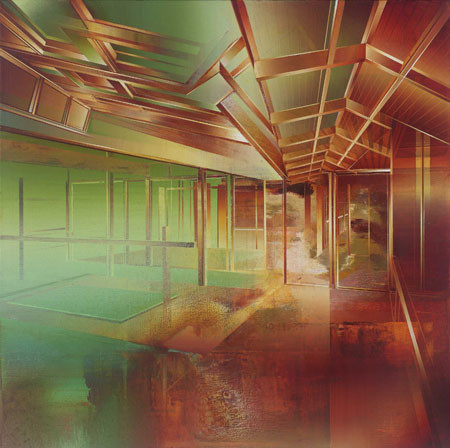 Continuing a long-standing tradition, Kunsthalle Düsseldorf will hold an exhibition of the works of seven Karl Schmidt-Rottluff stipend holders receiving scholaships between the years 2004 and 2006. The stipend worth € 35,000 is awarded every two years to three or four emerging artists. The funds come from the private fortune of Karl Schmidt-Rottluff, which the artist bequeathed to the Karl Schmidt-Rottluff Support Foundation in 1975 shortly before his death. The selection committee's overriding precept is the unbiased recognition of extraordinary individual achievement. For this reason the stipend has been characterised from the outset by a great diversity at the highest level. The current exhibition will present a variety of positions ranging from painting and drawing via sculpture and installation to video works.

The sculptress Stella Hamberg (*1975, lives in Berlin), who became known for her realistic groups of human figures, devotes herself in her new works to figurative sculpture, too. Her larger than life-sized »Berserker« made from bronze charts the dynamic tension in the relationship between the archaic and the contemporary. Martin Kobe (*1973, lives in Leipzig) paints labyrinthine, architectural compositions with perspective constructions that don't have a specific, verifiable vanishing point. The work brings digital worlds or virtually animated architectural plans to mind and emanates from a purely painterly imagination resulting in the rapid dissipation into the absurd of any apparent logic in the depth of field. René Lück (*1971, lives in Berlin) researches the oftentimes forgotten emblems of his generation. His artistic search revolves around the theme of political socialisation, which he develops in cardboard sculptures, collages and drawings to create stagings of a politically animated past. Stefan Mauck (*1973, lives in Braunschweig) focuses upon the topic of architectural environment as an interface between private and public space in a series of textual compositions and relief-like wall objects. In this way-not dissimilar to a baroque pictorial poem-he is able to lend the silhouettes of buildings a pictorial structure with the aid of normal and bold typefaces and thus describes at the same time the reality of our ways of living and domestic milieu by means of the textual content. The works of the filmmaker and video artist Clemens von Wedemeyer (*1975, lives in Berlin) oscillate between documentation and a cinematic aesthetic; they compact quotidian experience into metaphorical or absurd images. Wedemeyer is building a stage in the foyer of the Kunsthalle for his latest film which deals with the staging and self-staging of the protagonists. Ralf Ziervogel (*1975, lives in Berlin) is well known on account of his gigantic panoramic drawings. The luxuriously proliferating, finely drawn scenes evoke ornamental decoration and only upon closer inspection do they reveal the cruelly detailed representation of the abyss of human obsessions. Music and rhythm as the vehicle for culturally and emotionally determined rituals and experiences often form the starting point for David Zink Yi's (*1973, lives in Berlin) video works. His large video installation in the Kunsthalle he questions the role of the artist in the creative nexus of order and disruption.

This is a Karl Schmidt-Rottluff Foundation Berlin exhibition in conjunction with Kunsthalle Düsseldorf, the German National Academic Foundation and the Marianne Ingenwerth Foundation within the Donors' Association for German Science.