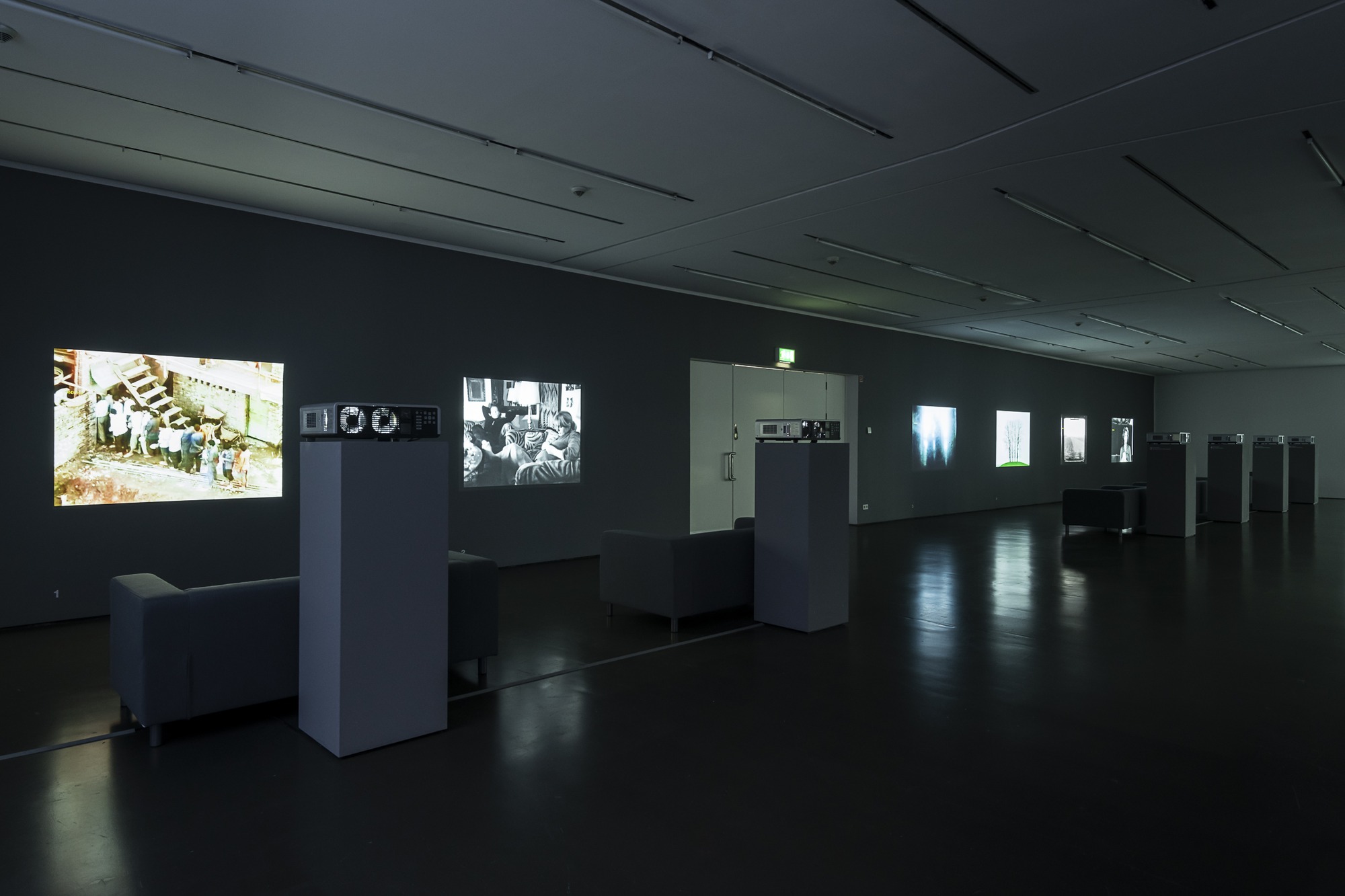 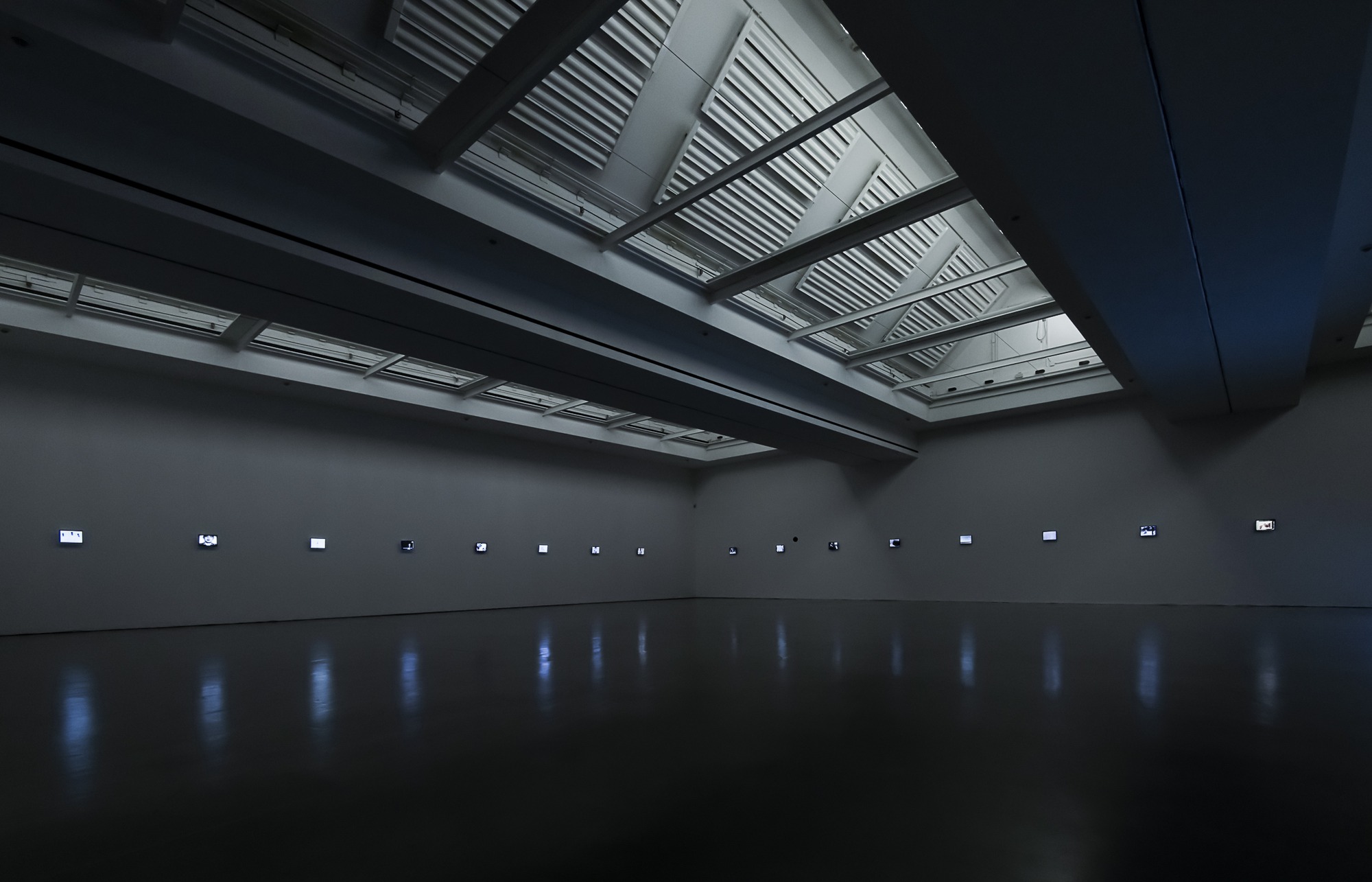 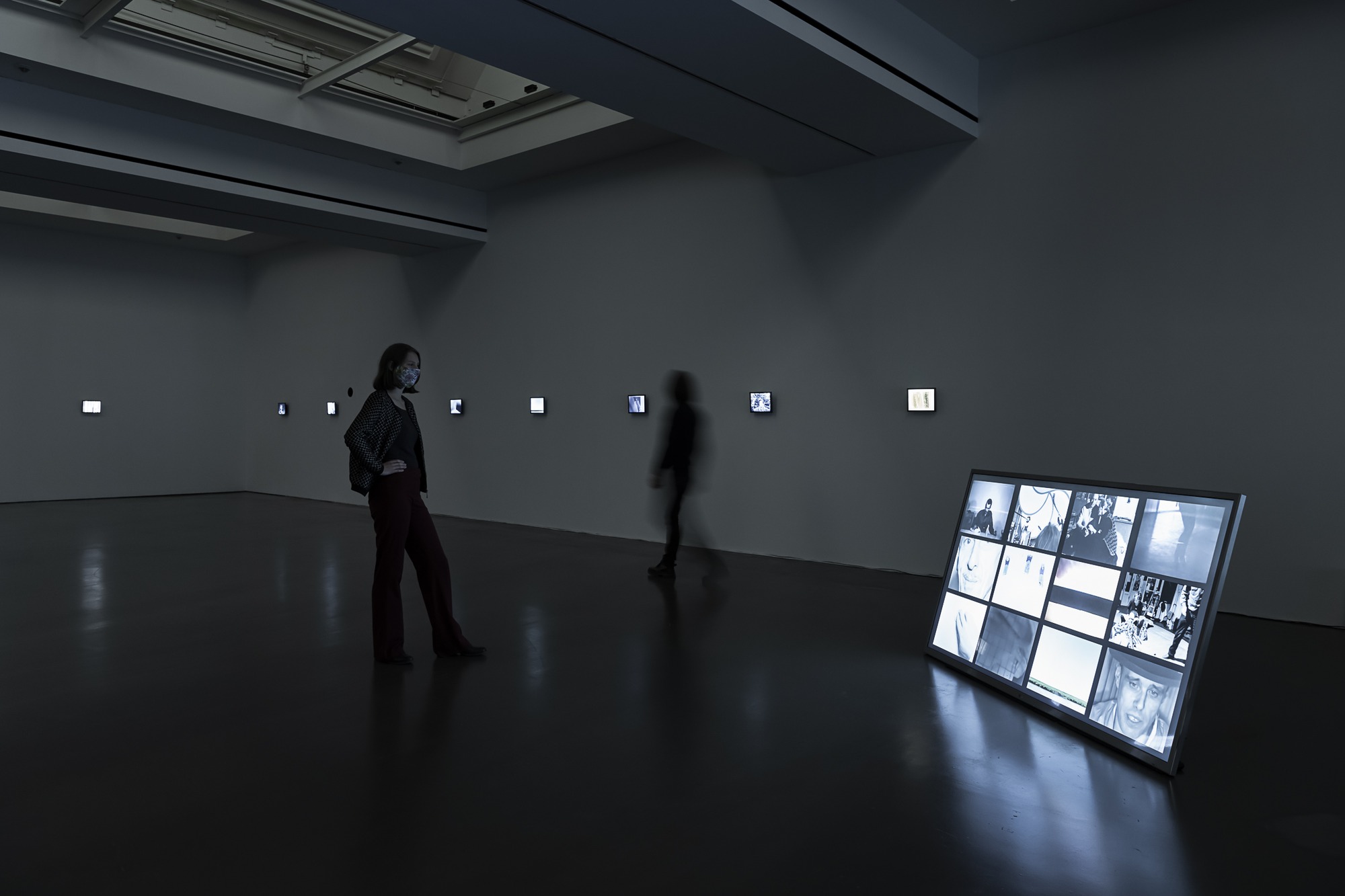 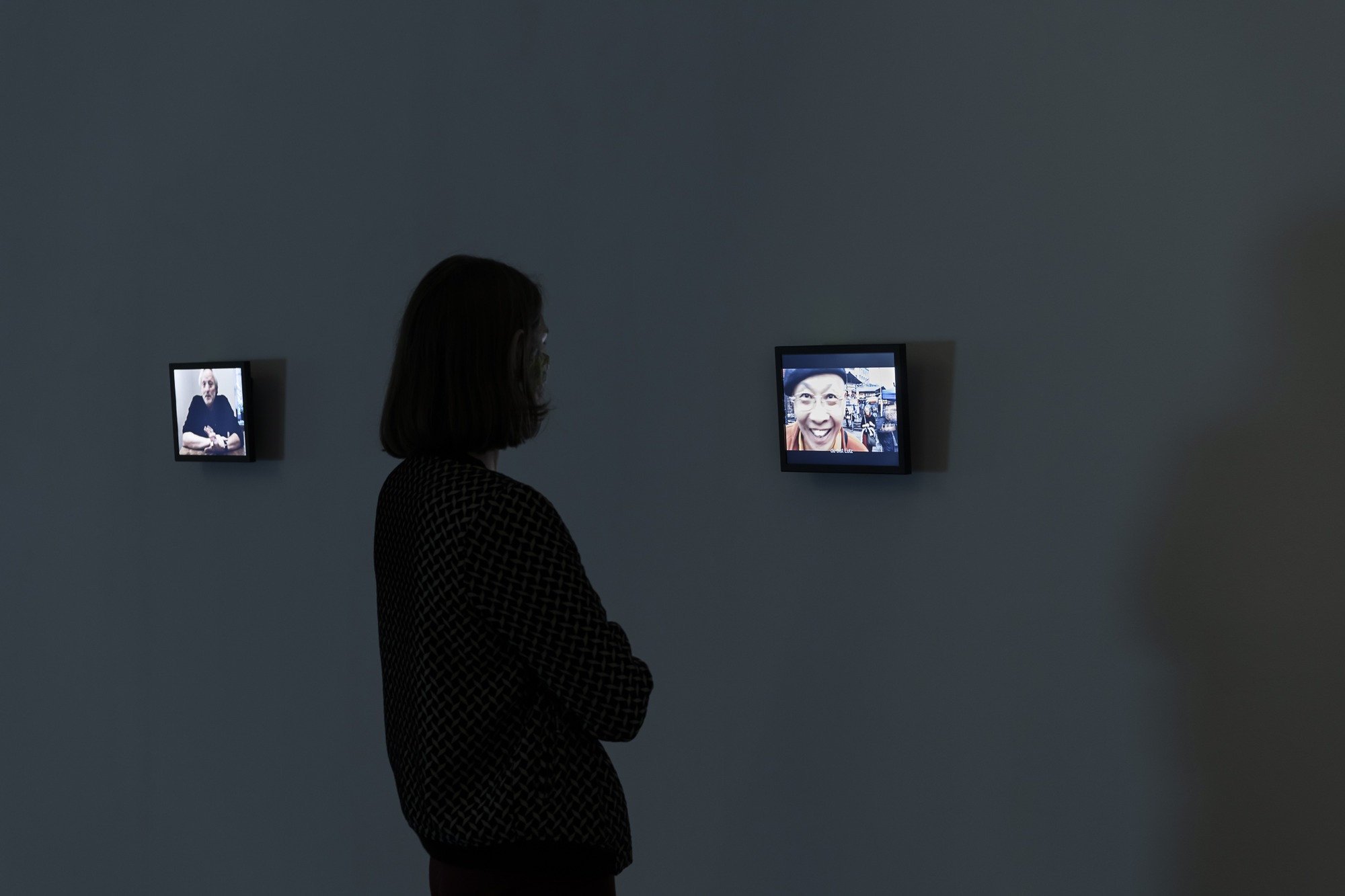 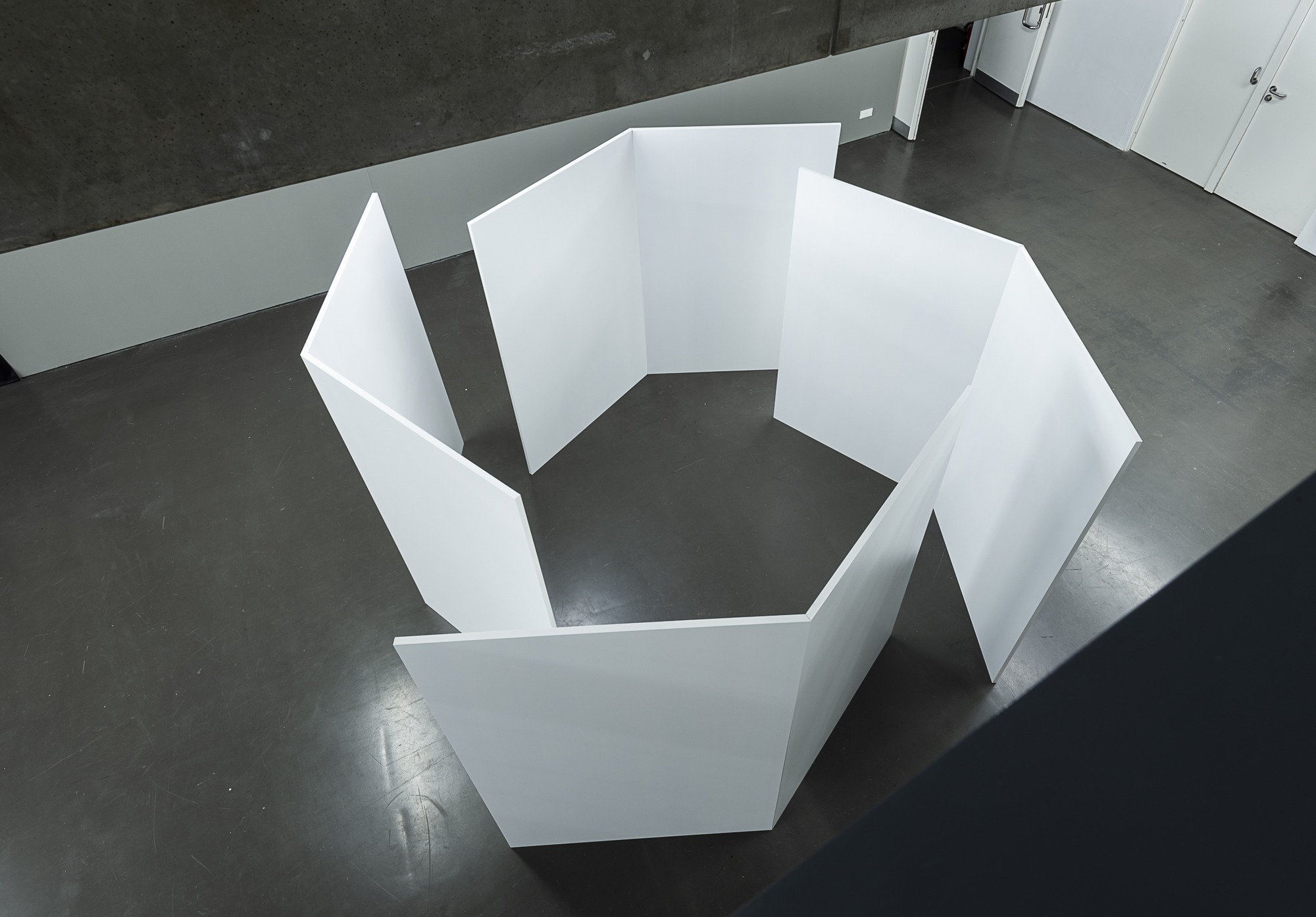 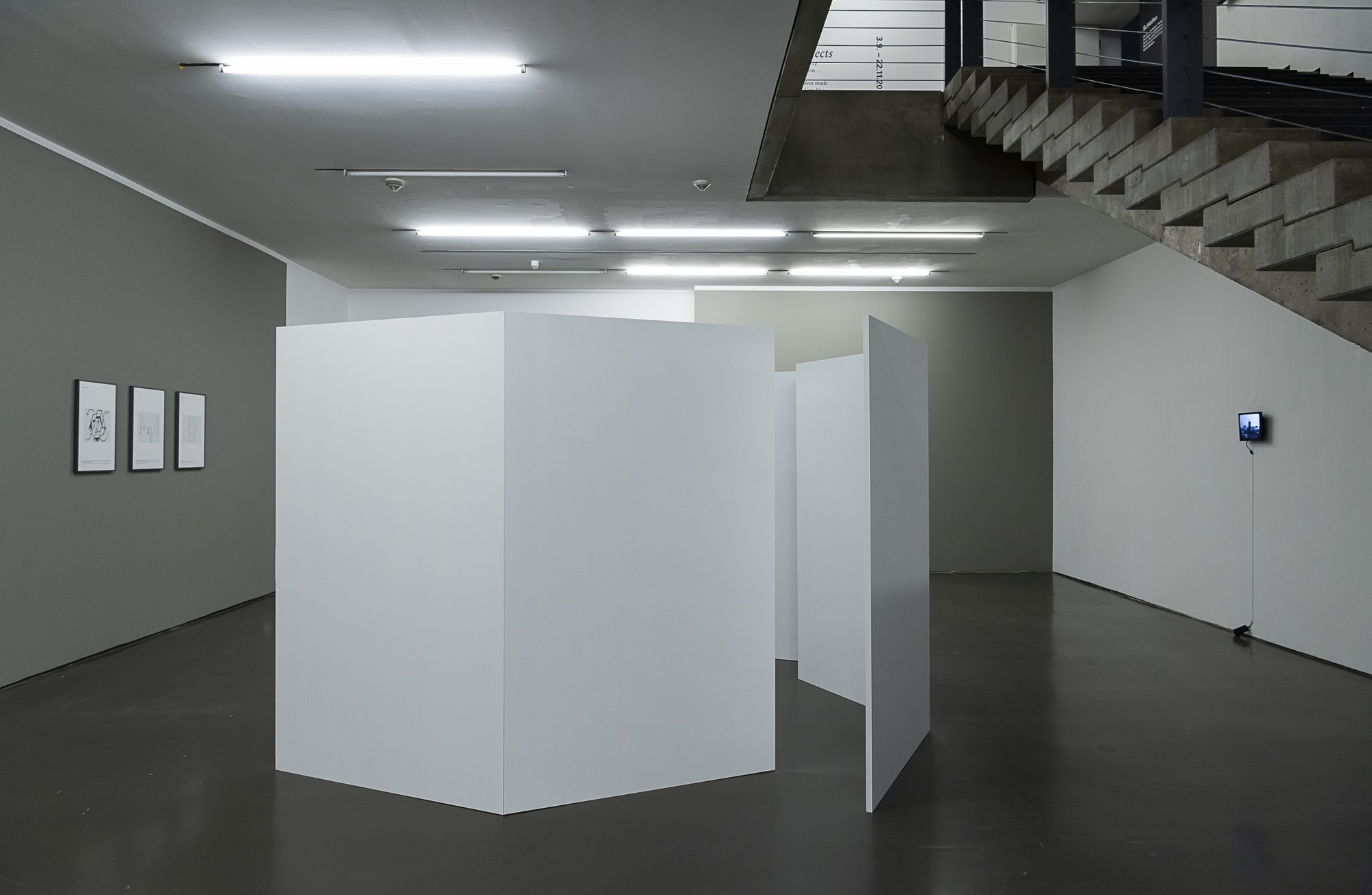 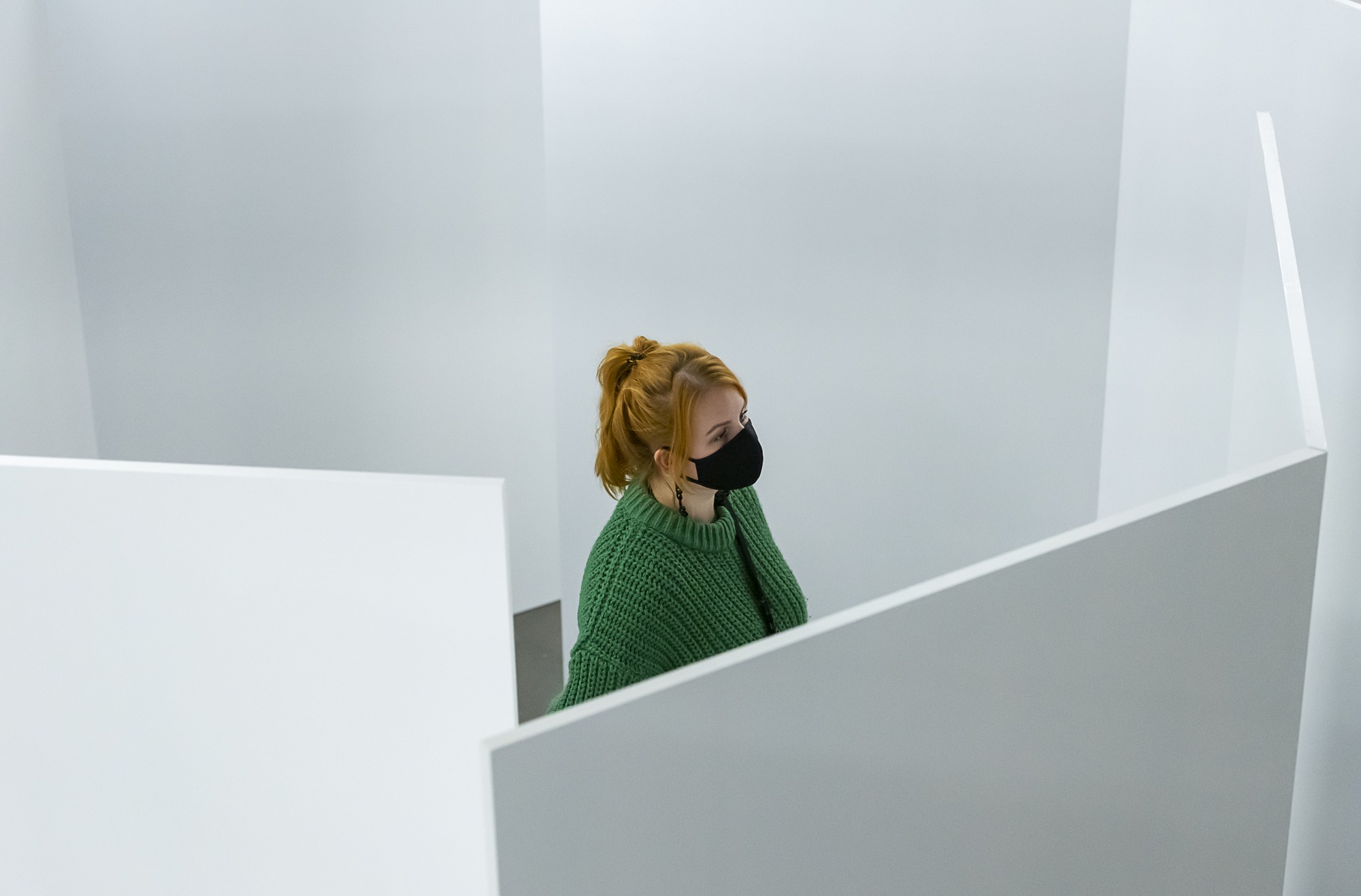 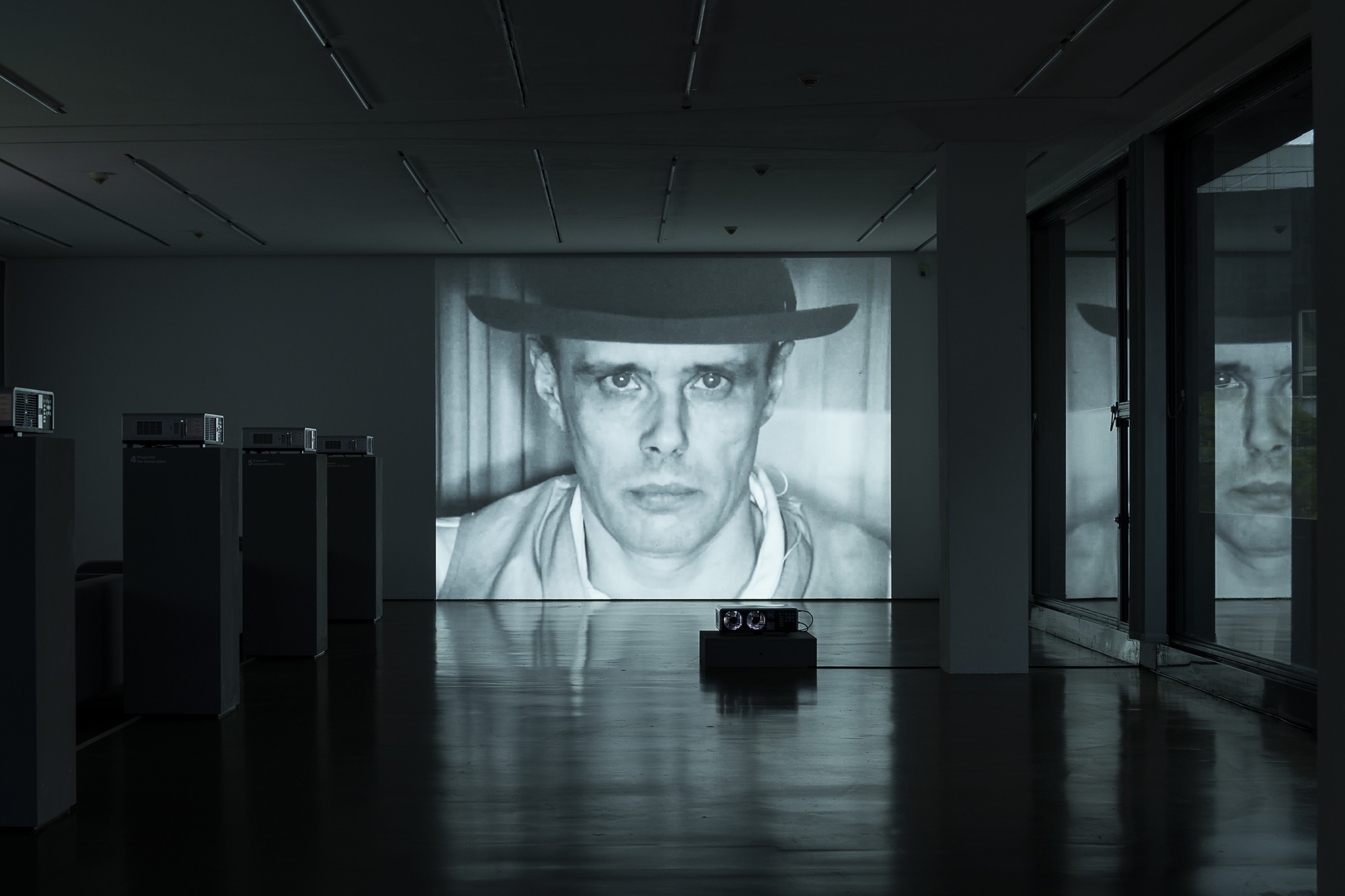 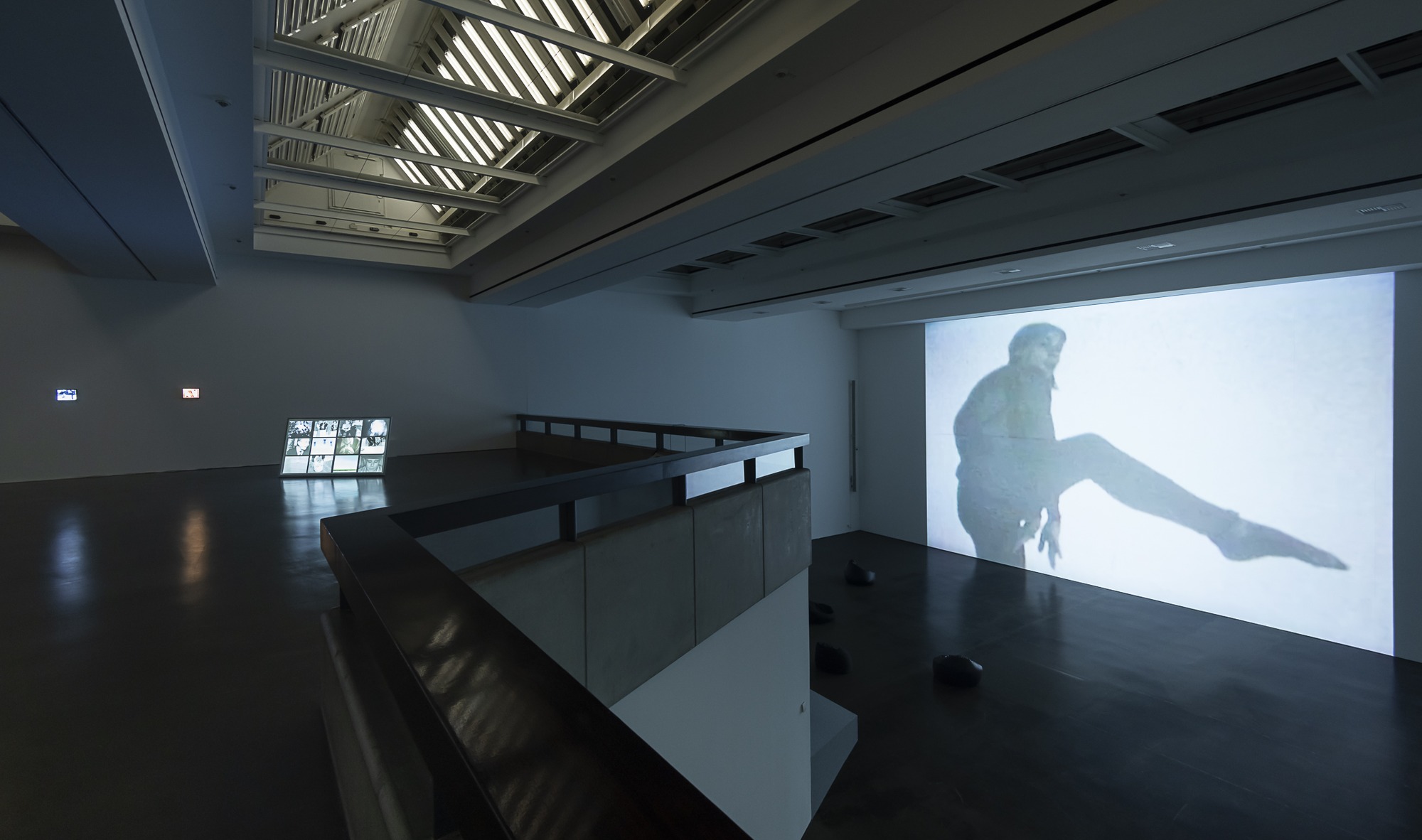 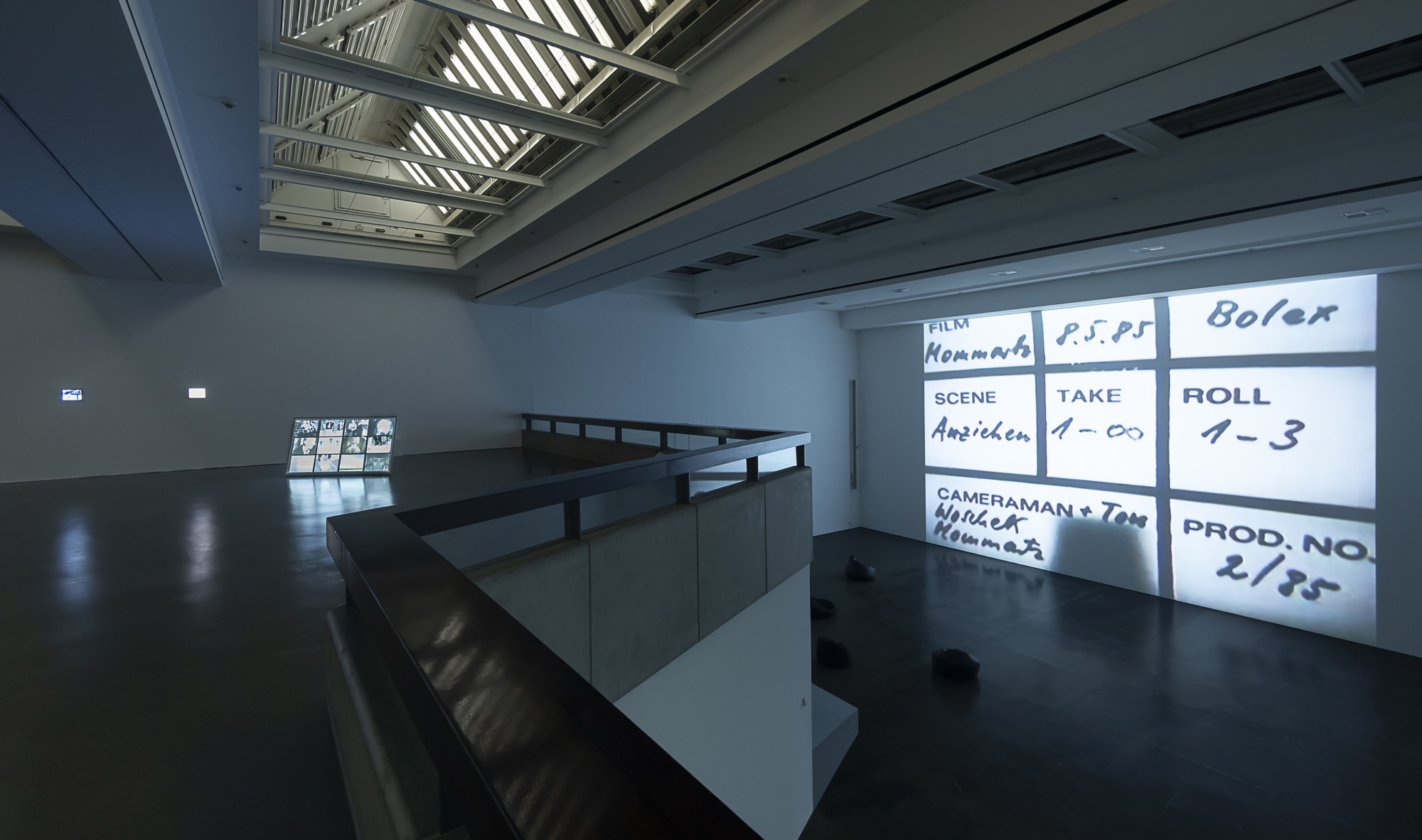 Lutz Mommartz, Zeitschneider, 2020. mommartzfilm 1964 – 2020. Premiere & Retrospective, installation view at Kunsthalle Düsseldorf, 2020/2021. Photo: Katja Illner
The work of the experimental filmmaker Lutz Mommartz (*1934) has been present in the art and film scene for over 50 years, and yet it has never been the focus of a solo exhibition in Düsseldorf, where he has worked as an artist since the 1960s. From the very beginning of his career, Mommartz was one of the unconventional thinkers who opposed the profane dream factory of cinema and sought to bring about a radical new beginning of film with aesthetic and social relevance. His concern was not the narrative and seductive element of film, but experimental answers to fundamental questions that remain relevant to film production today: How does the relationship between the filmmaker and viewers develop through the medium of film and, above all, how much authenticity can film tolerate?

Lutz Mommartz’s surprising success in 1967 at the renowned experimental film festival in Knokke, Belgium catapulted him as an autodidact into the ranks of German avant-garde filmmakers and visual artists. While continuing his career in administration, Mommartz co-founded the legendary artists’ bar Creamcheese, participated in influential film festivals and exhibitions such as documenta 4 (1968) and Strategy: Get Arts (Edinburgh, 1970), and became part of the circle of filmmakers who propagated “the other cinema” and alternative distribution systems.

When, with the emergence of the concept of “intermedia,” artists engaged with and combined previously separate genres of art and in general synthesized artistic practice and everyday life, the time-based medium of film also increasingly became the focus of artistic practice. In the 1970s, Lutz Mommartz played a key role in the Filmgruppe Düsseldorf initiative, which campaigned for the recognition of the medium of film in the visual arts and the establishment of a film class at the Kunstakademie Düsseldorf. In 1975 Mommartz became the first professor of film in what was then the department of art education at the Kunstakademie Düsseldorf (now the Kunstakademie Münster) and headed the film class until 1999. The activities of the Filmgruppe Düsseldorf also resulted in the founding of the Filmwerkstatt Düsseldorf in 1976.

The Kunsthalle Düsseldorf was one of the first institutions in Germany to show Mommartz’s films in an intermedia approach and to present one of his multimedia productions as early as 1968. His unconventional films and productions generate enthusiasm and media attention, but also occasionally controversy. In more than 50 years, Mommartz has produced an impressive body of short and experimental films, feature films, and documentary recordings of the Düsseldorf art scene, as well as time-based installations and projects.

The retrospective at the Kunsthalle Düsseldorf introduces Lutz Mommartz’s multilayered film oeuvre and reveals thematic and associative connections between the films. In addition, Mommartz undertakes a revision of his films in two large-scale installations and, from his current perspective, develops a presentation that uses cinematic processes such as montage, loops, slow motion, acceleration, and fragmentation. The exhibition is thus both a retrospective of Mommartz’s oeuvre from the past 50 years and its premiere.

The exhibition is curated by Renate Buschmann and Gregor Jansen in cooperation with the artist. An extensive two-volume catalog was published alongside the exhibition, which is conceived as an overview of Mommartz’s life’s work.

In addition, from 21 November 2020 to March 2021, the Filmwerkstatt Düsseldorf presents the exhibition Film, Gruppe, Werkstatt: Lutz Mommartz und die Filmwerkstatt Düsseldorf, curated by Jan Wagner, in which the joint production Der gerechte Krieg 1525, directed by Lutz Mommartz and Hartmut Kaminski, serves to illustrate the history of the institution.
www.kunsthalle-duesseldorf.de