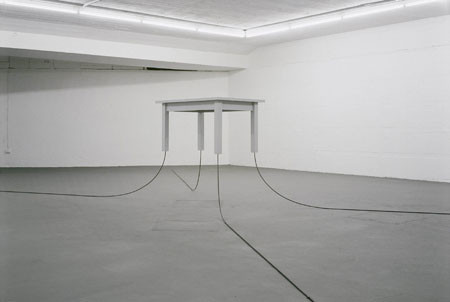 Bringing the year of exhibitions at the Kunsthalle to a close will be a Reiner Ruthenbeck retrospective held in conjunction with the Wilhelm Lehmbruck Museum Duisburg. Born in the Rhineland in 1937, Reiner Ruthenbeck is numbered among the leading German sculptors of his generation. He has exhibited works at the documenta, the Venice Biennale and other important major exhibitions on numerous occasions and held a chair at the Münster Art Academy from 1980 until 2000. He has consistently developed his densely wrought oeuvre from the mid 1960s to the present day as quiet and yet centrally important position in sculpture. He studied under Joseph Beuys at the Art Academy in Düsseldorf from 1962 until 1968. He had already found a distinctive language at this point, which developed ideas from Surrealism and above all from Minimal and Conceptual Art early on and yet defies any clear classification. Ruthenbeck takes up sculptural themes from the 1960s, such as use of unconventional, everyday materials or a reduction to the material as form; his ideas are remarkable here for the richly allusive and variable language of form they employ and the often-humorous levity, with which he animates the objects and installations and preserves them in a precarious equilibrium.

Whereas the Lehmbruck Museum's selection will concentrate on the Ruthenbeck's early works, the Kunsthalle — in conjunction with the artist — will show the large spatial installations and sculptures some of which will be conceived anew and produced with the specific architectural properties of the Kunsthalle in mind. A catalogue raisonné of all the installations, objects and conceptual works will be published to accompany the exhibition and for which Ruthenbeck has provided access to the entirety of his extensive archive material.
www.kunsthalle-duesseldorf.de