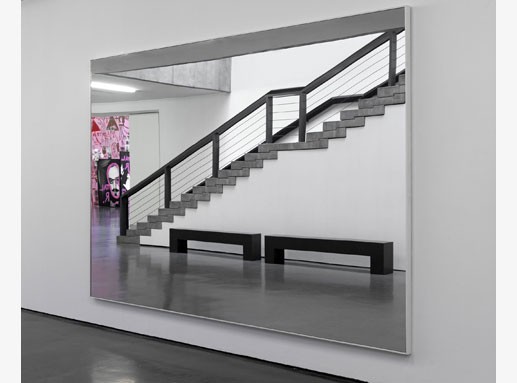 Every day we take several prolonged looks or fleeting glances in the mirror and barely think about the medium and its fascinating properties and applications: inverted, depicting, imaginary, spatial, reflecting, transparent, narcissistic, medical, etc. The 1871 book Through the Looking-Glass by Lewis Carroll leads us into the wonderland, into the fascinating, surreal world of doublings and reflections. The title of the exhibition is taken from the fifth chapter of the book. Against the background of fic-tional, imaginary space, and entering into the real space of the museum, various questions open up that have to do with our reflection and its interpretations, and ultimately with the self and self-con-sciousness. The fascination of the self in the virtual pictorial space of the mirror reveals tensions between the subject and its environment. Beginning with the genre of sculpture and its concrete materials, the works in the exhibition reflect relationships between the individual and the world and allow tangible interpretations.

The American artist Elaine Sturtevant’s copies deal with questions about the original, and the Belgi-an artist Lili Dujourie asks equally direct and conceptual questions about art and its minimalist and sensory relationships in her work. A political attitude and a political space appear just as radically in the work of Astrid Klein: the determination of the value of a reference lies in the subjective feeling of the viewer. Rosemarie Trockel addresses this aspect in a very personal and humorous way. In the work of Isa Genzken, a Large Window becomes a basic expansion not only of architecture, but of proportion and built space. The window onto the world is also a reflective foil of the world, as Mischa Kuball demonstrates with platon’s mirror. Projection screens, monitors, foils, and mir-rors are metaphors for our human imagination.

The question of the materiality of objects and their unclear re-functionalization plays an im-portant
double role as a work and an effect in the works of Reinhard Mucha. Work, history, and mea-ning are stored in materials and locations, and context and environment always also define an attitude and a positioning. Aron Mehzion, by contrast, leads us into a labyrinth of references to the philosophy of perception, an endless imaginary space; after all, our world is becoming increasingly complicated—media, science, our selves. Our tasks are becoming ever more com-plex, and our perspectives on time and space are becoming increasingly tangled. Furthermore, Mehzion and Kuball indirectly allude to a central reference for this exhibition: the work Mirror by the painter Gerhard Richter, which has been shown at the Kunsthalle Düsseldorf since 1981.

The exhibition is a spatial experiment with multilayered levels of depiction and reflects various aspects of the relationship between space and pictures, from multiple perspectives, from origi-nal images and copies. It asks questions about what art, artworks, work, the world, the self, and its reflection can be as models of knowledge. In the doubling of the world behind the mirror, paradoxically a concrete frame of reference opens for our questions about the real and possible forms of reality that lies between things. Thus, in addition to the general question of sensuality and aesthetics, the exhibition explores knowledge, values, and correlations as a cen-tral question and answer in space.
www.kunsthalle-duesseldorf.de