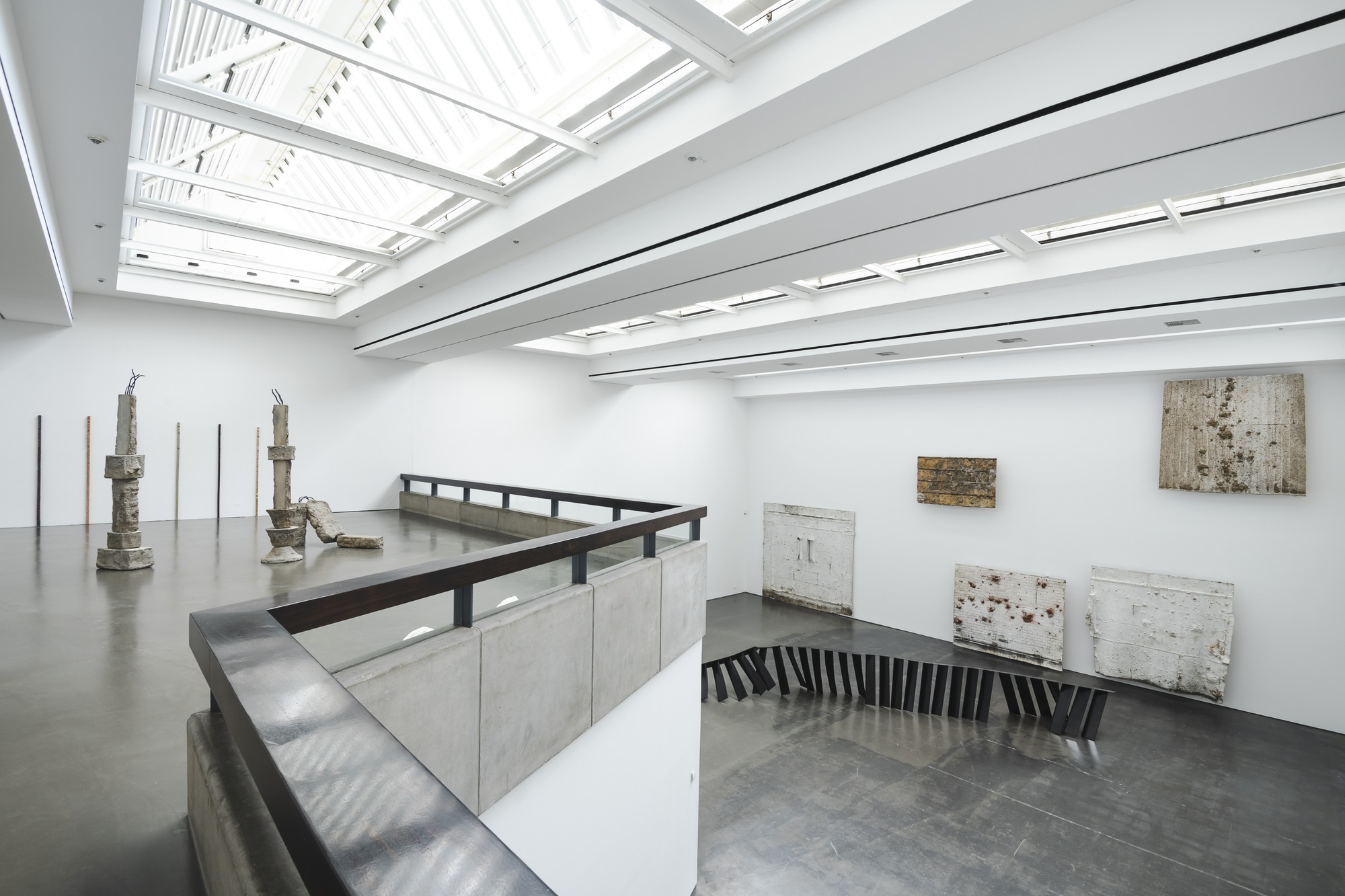 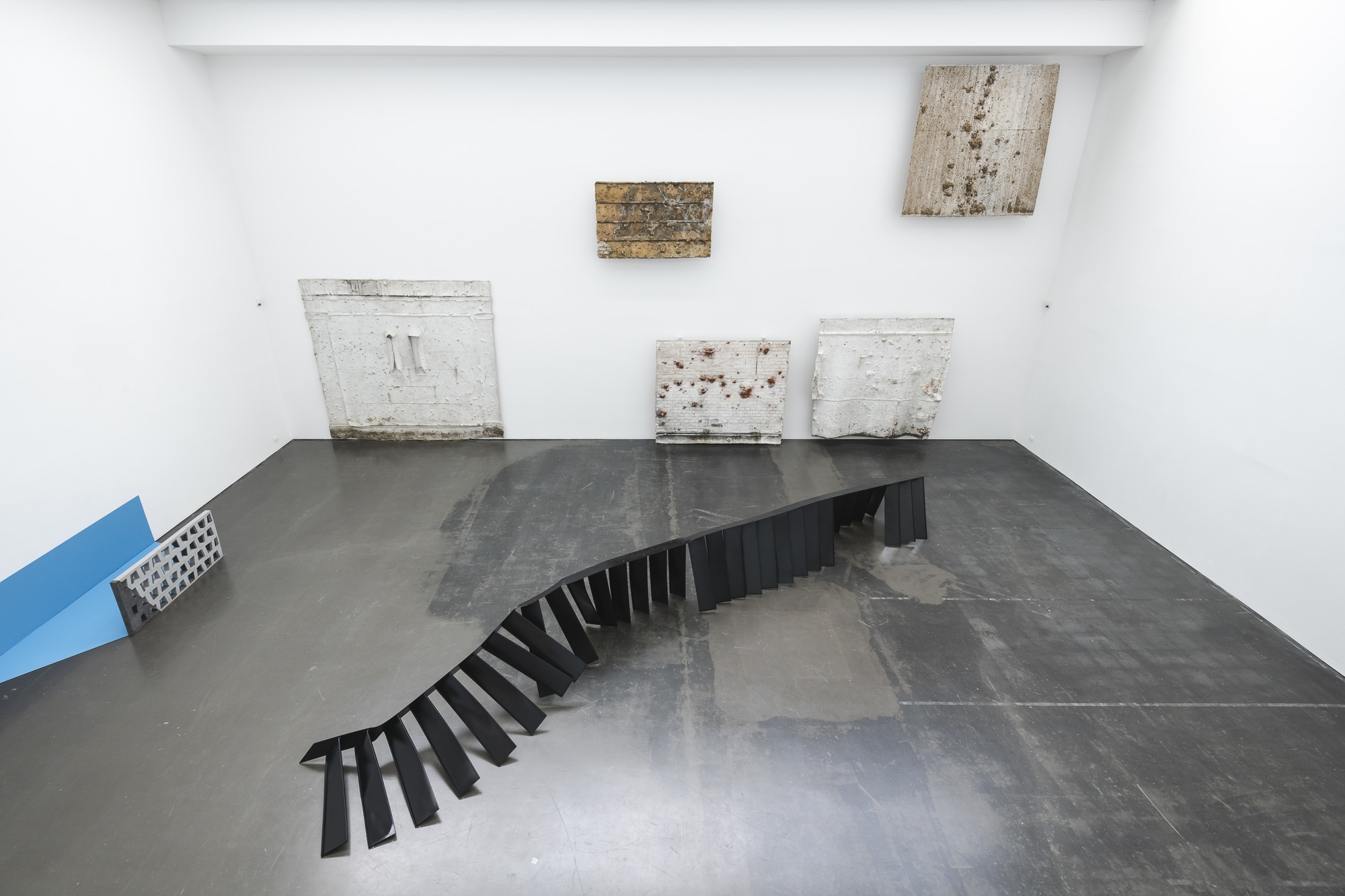 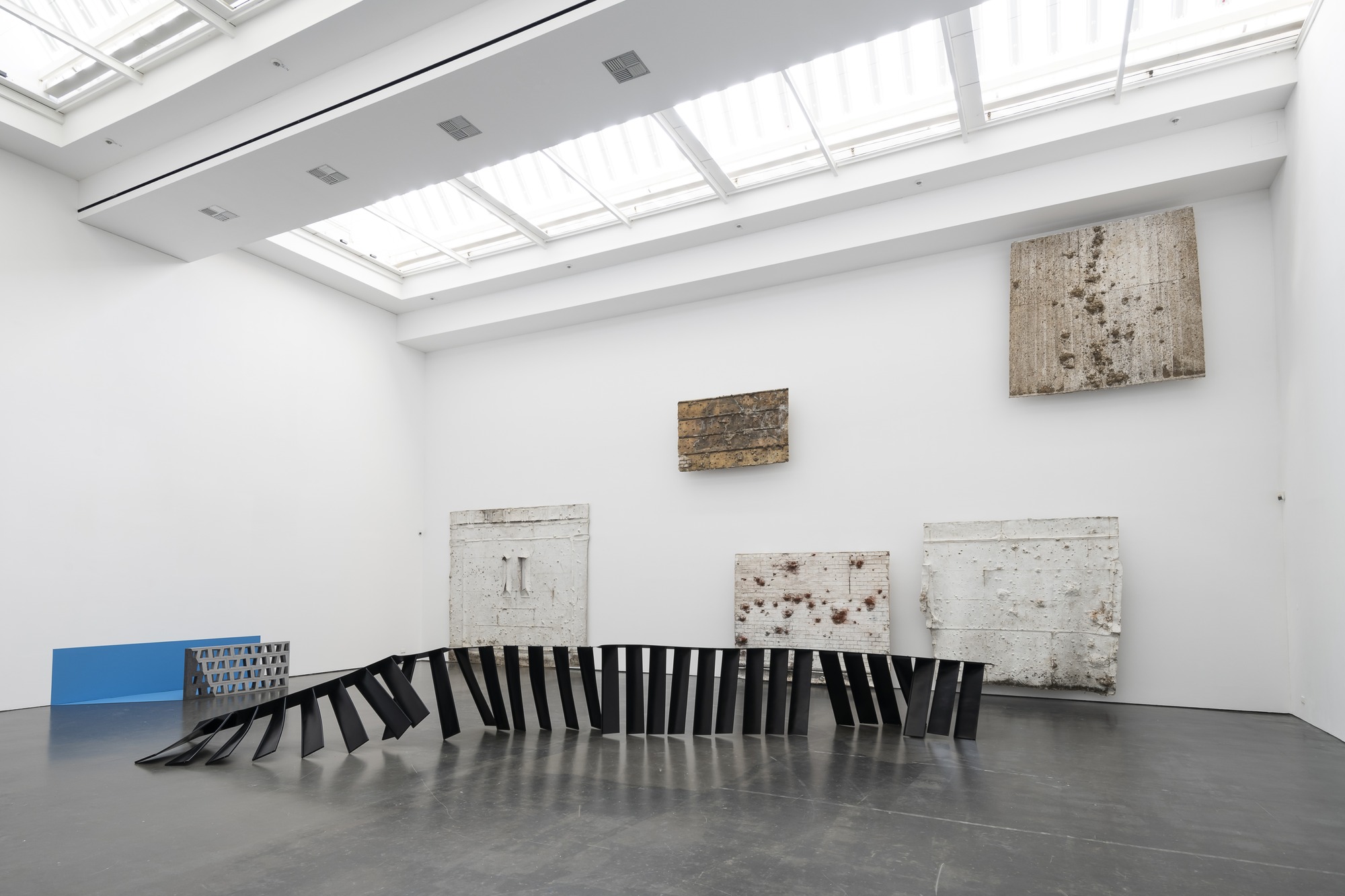 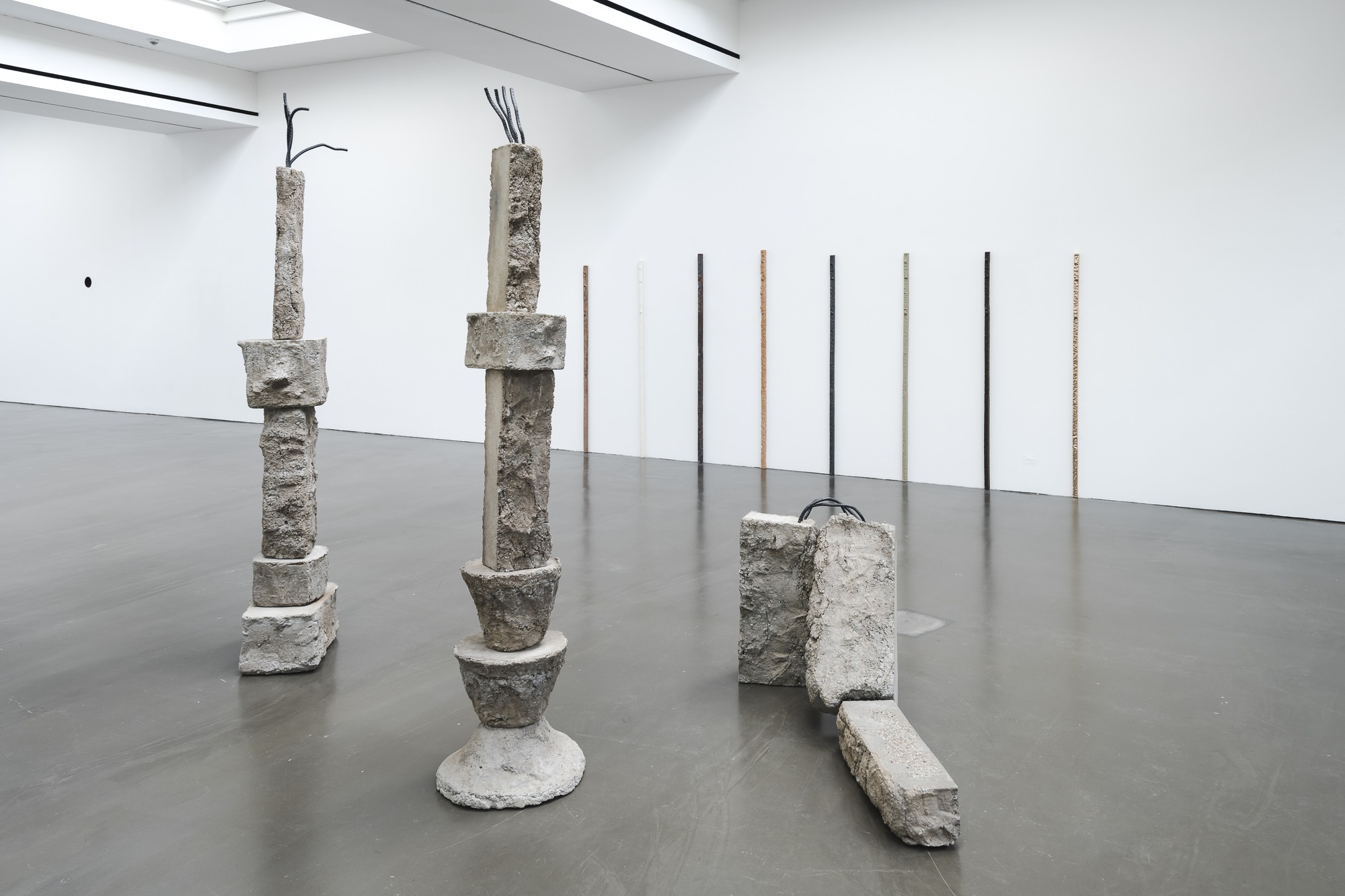 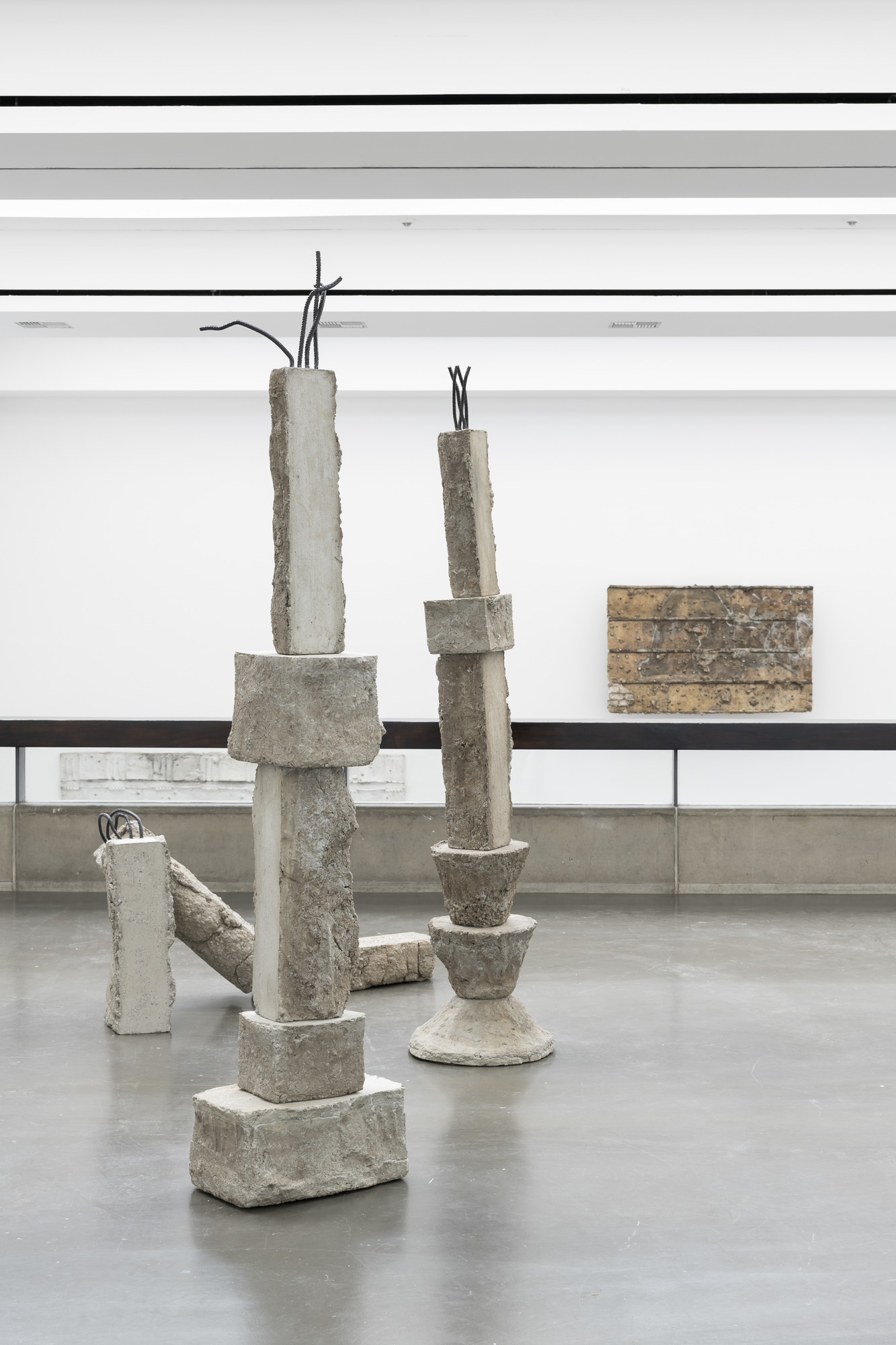 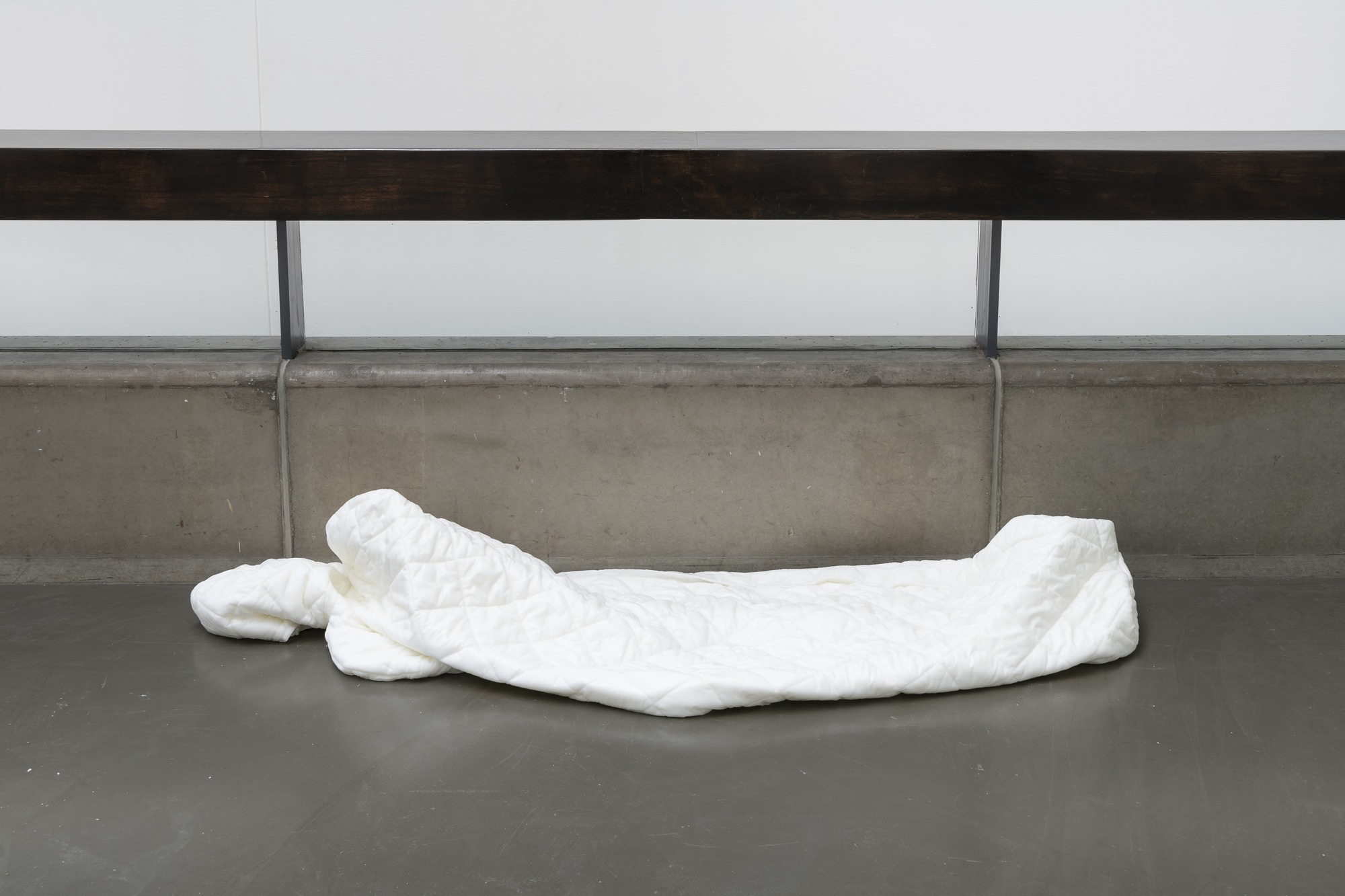 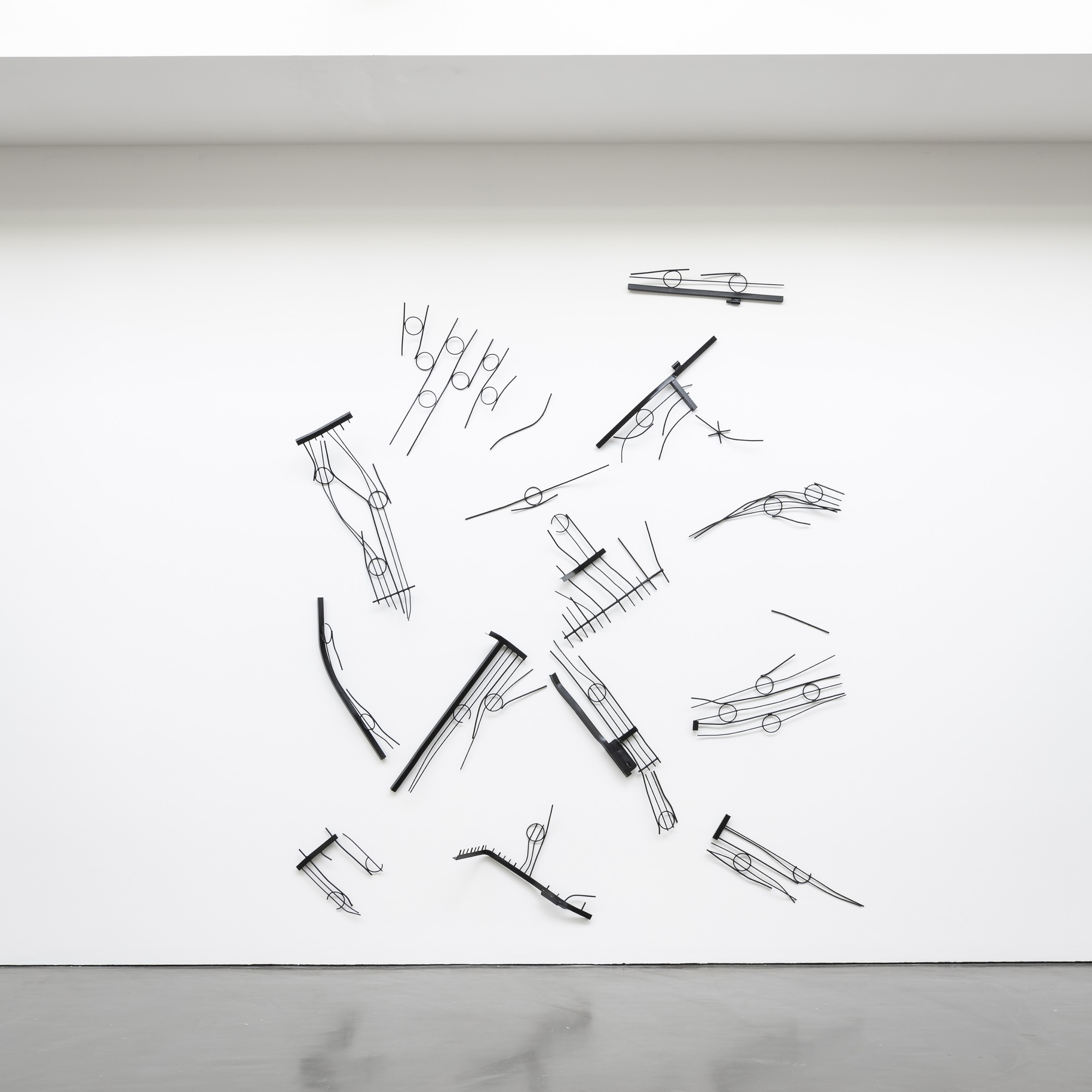 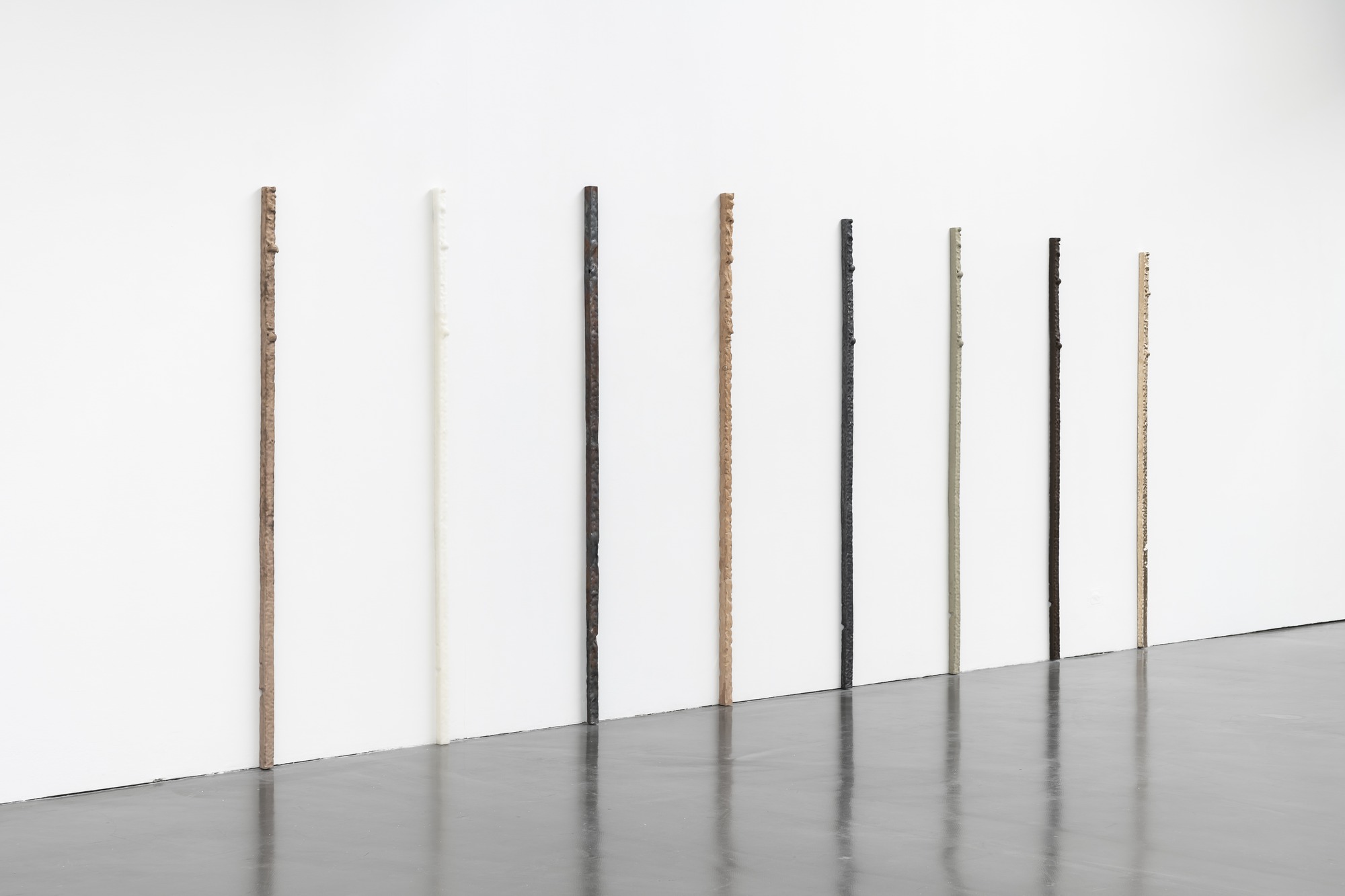 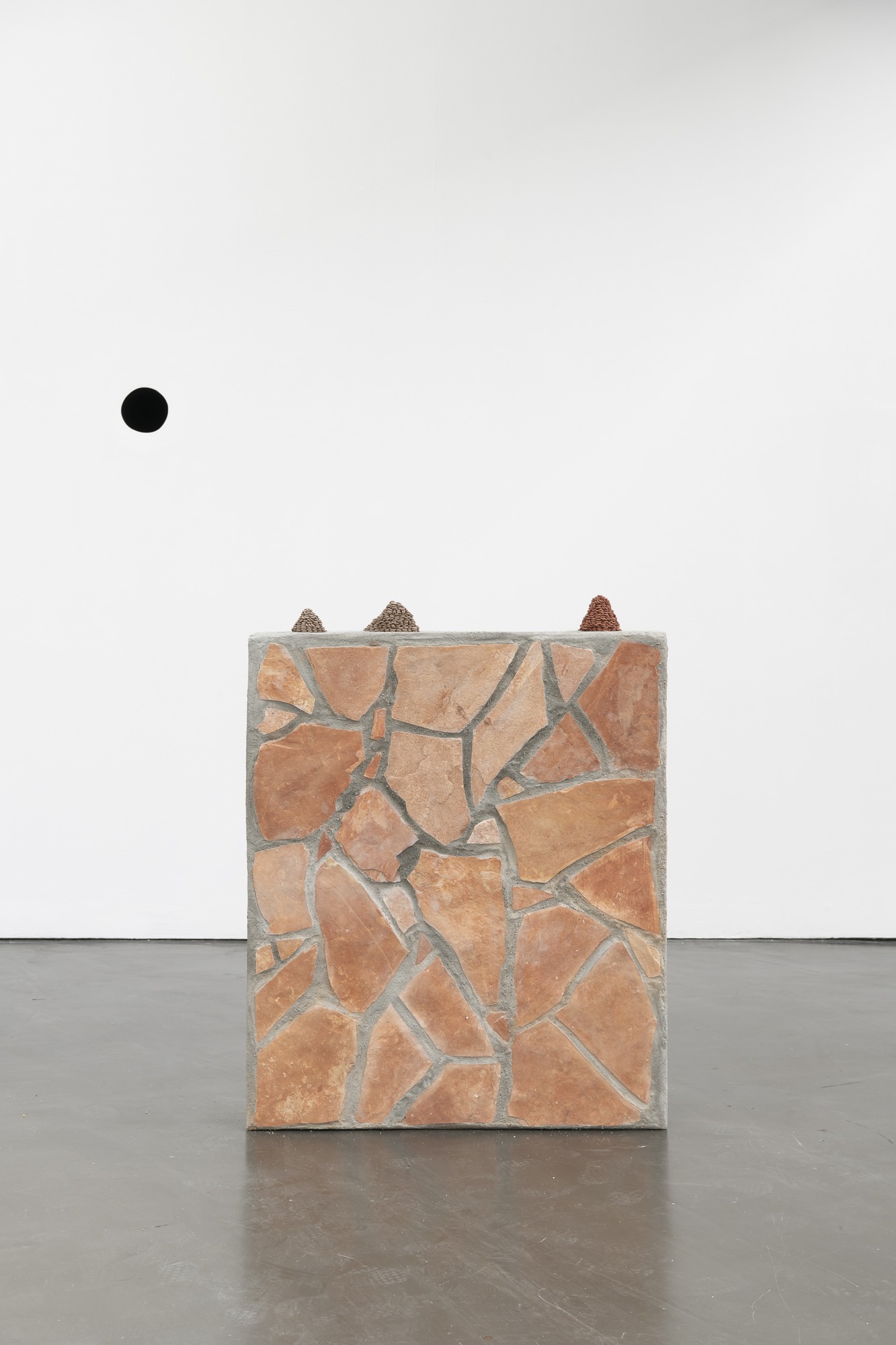 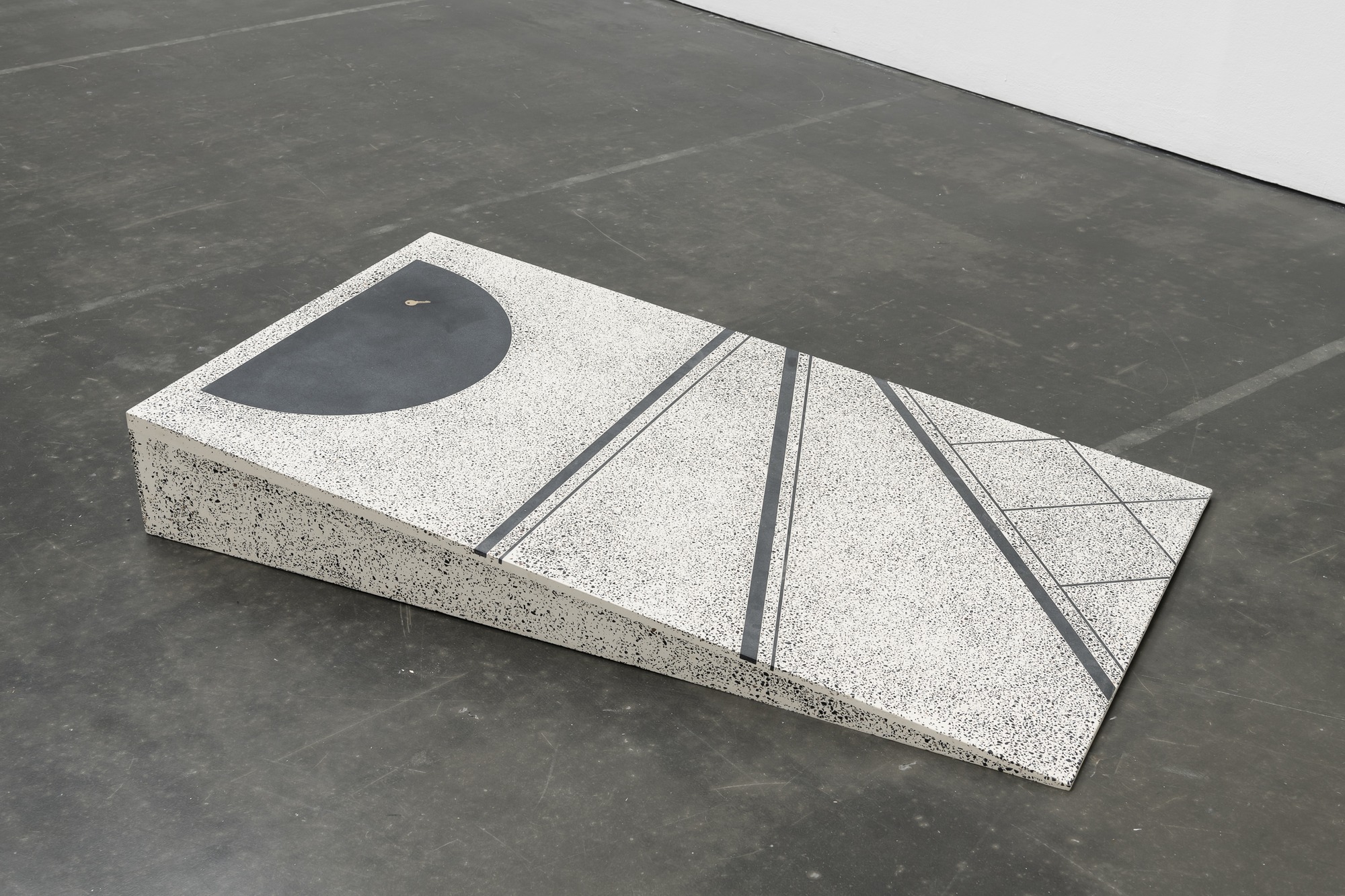 Yael Efrati
Untitled (Terrazzo piece), 2021
Schotter, Zement, Schlüssel / Aggregates, cement, key
Courtesy die Künstlerin / the artist
Foto: Katja Illner
The exhibition City Limits features three sculptors who see architecture as the point of departure for their work: Asta Gröting (*1961 in Germany), Monika Sosnowska (*1972 in Poland), and Yael Efrati (*1978 in Israel). The show illuminates the different strategies of architectural reconstruction used by the artists based on their personal memories.
Interpersonal relationships and people’s historical and cultural environments are also themes of the exhibition. The protagonist in all this is the city. Its structures and spaces serve as a starting point for reflection.

The three artists grew up in fundamentally different sociopolitical circumstances: Asta Gröting in the flourishing post-war West Germany, Monika Sosnowska during the decline of communism in crisis-ridden Poland, which underwent major sociopolitical upheavals in the 1980s and 1990s, and Yael Efrati as the daughter of Eastern European immigrants in Israel.

Despite their different cultural origins, the artists use similar artistic strategies to reflect their respective political, social, and historical realities, including extensive research and the photographic documentation of architectural elements.

With her silicone reproductions of Berlin facades scarred by bullet holes—particularly in East Berlin—Asta Gröting preserves the last remaining traces of World War II in the capital. As negative forms, the monumental works symbolize destruction, misery, and decay in post-war Germany.

Monika Sosnowska’s sculptures primarily express the artist’s perspective on urban spaces and architecture, and in particular her interest in the apartment blocks that were built in Poland in the 1960s, ’70s and ’80s in the style of socialist modernism, as well as their current fate.

Yael Efrati’s architectural elements, by contrast, are photographic reconstructions of typical features of socialist residential buildings. These were erected in Israel within a short period of time to provide housing for the influx of immigrants from Eastern Europe who, not only as a direct result of World War II, but also later in the post-war period, immigrated to the country to flee persecution by the hostile communist regime. Efrati’s works differ fundamentally from Sosnowska’s and Gröting’s monumental works both in their size and in the personal stories to which they are linked.

The three artists’ sculptures draw a clear historical line: from the rubble of World War II in Gröting’s Berlin facades to the architecture of the communist era in Sosnowska’s enormous, deformed objects, and the building of a new society of refugees who fled from the same war and its after-effects in Efrati’s work.

Tragically, the stories of nationalistically motivated wars, destroyed cities, and displaced people, as told by the artists, have once again become highly topical in Europe in recent months. In City Limits, the sculptors offer a vision of how historical justice and human resilience can prevail.

The exhibition was shown from November 2021 to February 2022 at the Center for Polish
Sculpture in Orońsko, Poland, which is the main producer of the exhibition along with the Adam Mickiewicz Institute. After its stop at the Kunsthalle Düsseldorf, in 2023 it will travel to the Bat Yam Museum of Art in Israel.

The exhibitions are curated by Sergio Edelsztein (Center for Contemporary Art, Tel Aviv) with co-curator Joanna Kiliszek, and by Gregor Jansen and Alicia Holthausen at the Kunsthalle Düsseldorf.

A publication has been produced for the exhibition.
www.kunsthalle-duesseldorf.de