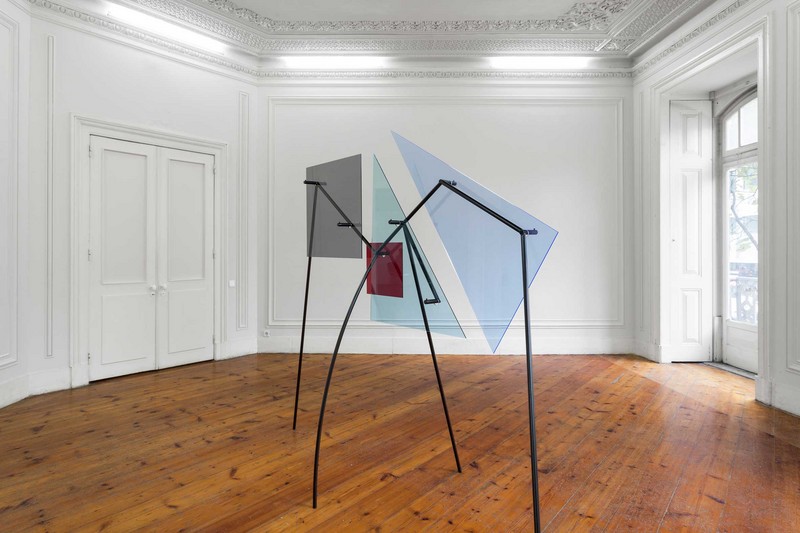 Kunsthalle Lissabon presents Memorial for intersections, the first exhibition in Portugal of Argentinian artist Amalia Pica. Assuming a temporal dimension, the project now being presented includes a set of three sculptures that will be displayed individually throughout the three months the exhibition will last. The dates in which new sculptures will be on display are December 5th and January 2nd.

Exploring different media like sculpture, photography, drawing, text, interventions in public space or performance, Pica's practice has used motifs like megaphones, microphones, antennas, flags, among others, which can be directly linked to actions such as speaking, writing, receiving, or presenting, thus developing a reflection on the way we communicate and exchange information with others.

In A ? B ? C, a project Pica presented earlier this year at Museo Tamayo in Mexico City, and more recently at Herald St., the artist's gallery in London, a group of performers pick up geometric perspex shapes that line the wall of the exhibition space, and arrange them into a composition in front of the audience. The compositions thus created are not determined in advance by Pica, who only established as a rule that no more than one shape can stand alone at any one time. This rule is derived from the field of mathematics known as set theory, which gives the work its name: a reference to the places where A and B and B and C intersect or, in this case, where the different perspex shapes intersect as a result of the action of the performers. A ? B ? C also functioned as a performative manifestation of sorts of the Venn diagrams that Pica used in Venn Diagrams (Under the Spotlight), a work presented in 2011 at the Venice Biennale and investigating a specific episode in the history of the use of such diagrams: the prohibition of its use during the Argentinian dictatorship of 1976-1983. Pica speculates that the ban was due to the fact that they enabled the representation of the concept of cooperation.

During the presentation of A ? B ? C at the Tamayo Museum, the performances were documented photographically on black and white film, an inappropriate medium to record the colors of both the perspex shapes and their intersections. This documentation is at the origin of the set of sculptures now being presented for the first time in Kunsthalle Lissabon. Being an exercise of subjectivity, since Pica had to imagine the colors of the shapes, hopelessly lost in the documentation process, Memorial for intersections suggests stories of avant-garde and abstraction, of rise and fall of utopias. These are memorials for ephemeral moments, for episodes and images that lasted only seconds but in which forms did represent and effectively create cooperation between individuals.