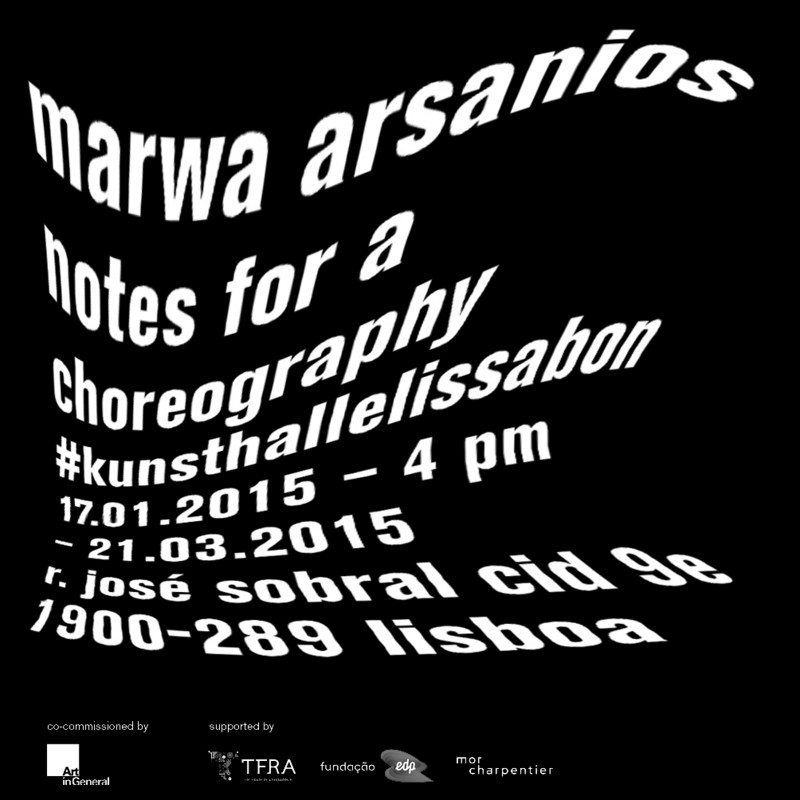 Notes for a choreography premiers Arsanios's new film, OLGA's NOTES, all those restless bodies (2014), a co-production between Kunsthalle Lissabon and Art in General, New York, where it will be presented in March 2015.

This film takes an article on the establishment of the ballet dance school in Cairo that appeared in Al Hilal magazine (January 1963) as its starting point. The article describes the ballet school as the "factory of the bodies". The ballet school being part of the Egypt's modernization project and Nasser's nation state building at that time. Supported by Russian directors such as Lavrosky, the ballet school became an important institution in this state project.

The film script juggles between different dances and small stories linked to this history. Looking at dance from a historical and political perspective and looking at the body from the perspective of dance, labor and exploitation. Dance becomes an excuse to think about labor, and labor an excuse to think about dance and movement. Also to think about the violence of nation state building and how this can be directly perceived on the body of the dancer. The damaged dancer after years of training, rehearsing and performing becomes a metaphor of the violence of state projects, nation state building that comes with a capitalist ideology and its consumerist relation to the body.

Pierre follows the main ballerina from the fountain of Bakhshisarai (the first big production that was performed by the ballet dance group in Cairo in the presence of Nasser where dancers were awarded order of merit), Sandra re-enacts the classic Yvonne Rainer's Trio A (a dance she had learnt by heart in dance school), Jasmine does her usual pole dancing, Natacha fails to remember her part in the harim dance and improvises a dance. Cynthia appears from behind while she was dancing alone and Alia stands still, re-enacting certain poses of dancers while they were not dancing. These bodies, side by side, try to find a history, a fragmented story of a damaged, colonized and crazy body that has failed to remember, failed to perform and is just sliding on stage. Different histories clashing, bodies side by side.

This film is part of Arsanio's long term research project "Al Hilal" that takes the collection of magazines from the 50s and 60s as its starting point to look at questions of decolonization, nation state, violence and the marginalization of feminism.

The exhibition will also present I’VE HEARD STORIES (2008), a short animation staging a story that took place at the Carlton Hotel in Beirut. The Carlton Hotel was an iconic modernist building designed by architect Karol Shayer. The animation tries to explore different ways of narrating an event, using diverse sources, voices, and the way they have been circulated. The beauty of modern architecture is filled with crime, violence and death.

Marwa Arsanios (Washington D. C., 1978) lives and works in Beirut, Lebanon. She obtained her MFA from Wimbledon College of Art, University of the Arts, London, UK (2007) and was a researcher in the fine art department at the Jan Van Eyck Academie, Maastricht, the Netherlands (2011-2012). Her work was shown at Art Dubai in the Bidoun Lounge (Art Park 2009), at the Forum expanded of the Berlinale (2010), at the Homeworks V and VI forum (Beirut, 2010 and 2013), Tokyo Wonder Site (2011), the 12th Istanbul Biennale (2011), the Cornerhouse (Manchester, 2012), the Venice Biennale (Future Generation Art Prize, 2013), and most recently at the New Museum (New York, 2014). Her videos were screened in several festivals and events such as the Rio de Janeiro film festival in 2010, the e-flux storefront in New York, and at the Centre Pompidou in Paris.
She has been nominated for the Pinchuk Future Generation Art Prize 2012 and won the special prize. She was also nominated for the Sovereign Art Prize 2012.
Arsanios is a founding member of the artist organization and project space 98weeks research project. She is also a part-time teacher.

Marwa Arsanios's exhibition is a co-production with Art in General, New York, and is supported by Mor Charpentier, Paris.