Dix/Beckmann: The World as Myth 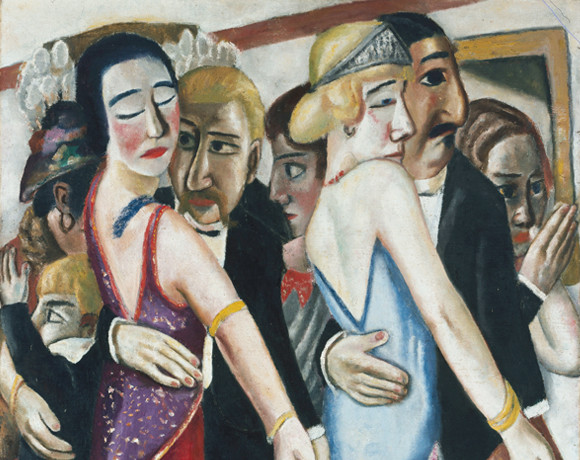 Dix/Beckmann: The World as Myth // Max Beckmann (1884-1950) and Otto Dix (1891-1969) are the two outstanding figurative painters of German Post-Expressionism. They fascinate and polarise to this day. Their paintings had a distinctive impact on the cultural Golden Era of the Weimar Republic. It was Gustav F. Hartlaub, director of the Kunsthalle Mannheim, who placed Dix and Beckmann at the heart of his programmatic exhibition “Die neue Sachlichkeit” in 1925. Today, and in the same space of the Jugendstilbau, both artists come together again in Mannheim for an intense artistic dialogue with astonishing relations and surprising juxtapositions.
The exhibition presents a riveting parcours through the art of these quite disparate painters. Fifteen galleries – each devoted to a different topic – show unexpected analogies and differences in their views of the world and their pictorial language. The gallery “The world as stage”, for instance, places the viewer within the roaring Twenties, when both painters were extremely successful and caught the pulsating metropolitan life on canvas. “Drive and Dream”, on the other hand, reveal secret longings and nightmares depicted in oil and watercolour. While Beckmann leaned towards symbolically dense compositions, Dix stuck to his approach of visual truth. Dix/Beckmann: The World as Myth shows how much both artists were affected by the extremes of the age they lived in. World War I marked the artistic starting point for both Dix and Beckmann, and both lived and worked through the rise and fall of the Weimar Republic. In the mid-1920s, both artists were appointed to renown Academies of the Arts, while the NS-regime ostracised them equally and threated their very existence. It is here their paths separated: Dix remained in Germany which became a divided country after 1945. Beckmann emigrated to Amsterdam, and in 1947 to America. Beckmann and Dix apparently never met in person. Yet as artists they both reach the magic moment, when the known turns alien and the world into a myth. Dix/Beckmann: The World as Myth presents 100 paintings and 165 works on paper, among them key works from renown museums and private collections in Amsterdam, Berlin, London, Munich, New York and Washington. The exhibition-catalogue is available in the shop.
www.kunsthalle-mannheim.eu