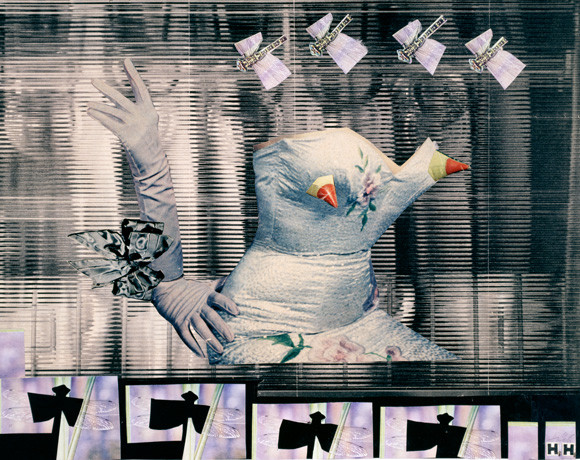 Hannah Höch vom 22.04. bis 14.08.2016 // Hannah Höch is considered the most significant German female artist of classical modernism. As a revolutionary of art, she ranks among the pivotal figures that have linked the emancipatory art of the avant-gardes of the first half of the 20th century with the second half. The progressive artistic stance imbued with the rebellious consciousness of Dada shaped Höch’s life and art. After 1945 she became a pioneer for a young generation of artists that in the 1960s took up the utopian-revolutionary potential of 1918/19.
In 2016 the Kunsthalle Mannheim presents the first comprehensive retrospective of Hannah Höch’s works produced after 1945. With this show, the Kunsthalle Mannheim continues its series dedicated to significant female artists of the 20th century – from Germaine Richier, to Ré Soupault, to Magdalena Jetelová, Nairy Baghramian and Pipilotti Rist. There is much to be discovered in Hannah Höch’s oeuvre that spans more than six decades of creativity from 1916 to 1979. Nevertheless, after the Second World War the artist was appraised almost exclusively as the grande dame of Dadaism. The one-sided focus on her Dadaistic work of the 1920s has shaped the artist’s image until today – and obstructs the view to her art after the Second World War. The show addresses Dada’s revolutionary conception of the world as the fundamental idea of Höch’s oeuvre, as well as the diversity of her work, above all, the collage which she introduced to fine art in 1918 as an independent, extremely effective medium that remained the artist’s most important form of expression throughout her career. The collage titled “Entartet” (Degenerate) with a lustrous silver corset and pointed cone-shaped breasts is legendary: As the incarnation of seduction and decay, it is merely an empty casing, headless, with flies swarming around it. By focusing on Hannah Höch’s works created after 1945, the Kunsthalle Mannheim acknowledges the value of her entire oeuvre and highlights the artist’s central position in the context of modernism and the 20th century. The exhibition is grasped as an essential contribution to both the work of Hannah Höch and the 100th anniversary of the international Dada movement founded in Zurich in 1916.
www.kunsthalle-mannheim.eu