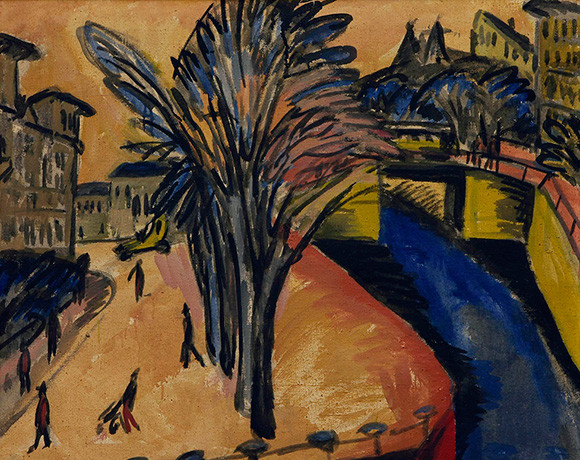 "I also need to save something now, and materials have become very expensive. But the canvas has 2 sides, thank God”, Ernst Ludwig Kirchner wrote in 1919. And so Kirchner, a world-renowned German Expressionist, took a number of his paintings off their stretchers, stretched them the other way around and used them again. In art history and the art trade today these reverse side images are a hotly-debated topic. The Kunsthalle Mannheim, along with the Kirchner Museum in Davos and the Kirchner Archive in Wichtrach, brings them together for the first time in an exhibition.

The impetus for the exhibition was the 2009 rediscovery of Moroccan (1909/1910) on the back of the Kirchner painting Yellow Engelufer, Berlin (1913) in the Kunsthalle Mannheim collection. The Double Kirchner: two sides of the canvas presents 16 exemplary double-sided works together with exciting research into this artistic peculiarity. Through scientific and curatorial examination, the art world's differing perspectives reveal this as a phenomenon in transition, with the central dilemma being how best to present reverse images in a museum context.
Ernst Ludwig Kirchner (1880 - 1938) was one of the most important German Expressionists. With his avant-garde attitude to life and his liberated approach to form and colour, he revolutionized painting in the early 20th century.
After his architecture studies Kirchner founded the group “Die Brücke” in 1905, together with Erich Heckel, Fritz Bleyl and Karl Schmidt-Rottluff. It was the group's desire to build a bridge between the past and the modern era.
After his service in the First World War, Kirchner suffered a nervous breakdown and was on medication for the rest of his life. He left Germany for good in 1917 and settled in Davos, Switzerland. During the Nazi regime, 639 Kirchner paintings were removed from various museums and 32 of the works were selected for and derided in the Entartete Kunst (Degenerate Art) exhibition of 1937. In March 1938 Kirchner destroyed many of his paintings and, in June of that year, he took his own life at the age of 58.
www.kunsthalle-mannheim.eu