The Strength of Line: Expressionist prints 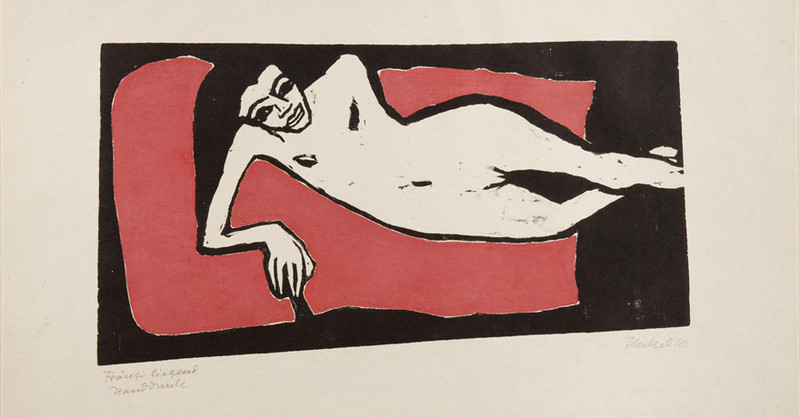 »The artist’s job is to be a witness to his time in history.«
Robert Rauschenberg

The Strength of the Line // This truthful reflection was particularly dear to their hearts: at the end of the 19th and beginning of the 20th century, the Expressionist artists and their precursors turned away from Naturalism in search of an expressive representation of their own experience. This new exhibition presents a focused choice of drawings and prints by Expressionists such as Erich Heckel, Ernst Ludwig Kirchner, Karl Schmidt-Rottluff, Max Pechstein and Emil Nolde.
The goal of the Expressionists was to break away from the academies' stylistic traditions and from the Impressionists' clear conception of nature. Instead they would free colour and form from realistic representations and lead them to a higher artistic expression of their feelings and subjective sensations. Some artists joined together in now legendary groups. "Die Brücke” was founded in 1905 by Ernst Ludwig Kirchner, Karl Schmidt Rottluff, Erich Heckel and Fritz Bleyl in Dresden. In 1911, Wassily Kandinsky, Alexej Jawlensky and Franz Marc started the "Die Blaue Reiter". In their pursuit of artistic truth, the Expressionists were often edgy in their reduction of forms. They distributed colour over wide planes, between broad contour lines, to dramatic effect. The Expressionists were influenced by the art of 'primitive' cultures in Africa and the South Pacific. During this movement the wood cut found a completely new expression and underwent a kind of Renaissance. The flat, crude forms were well suited to this graphic technique.
"The Strength of the Line: Expressionist prints“ is shown in the permanent display space of the Kunsthalle Mannheim's Prints and Drawings Collection, near the historic library designed by Hermann Esch.

A catalogue will be published on the occasion of the exhibition. It documents the museum's graphics collection from the first half of the 20th century, among them many of the Expressionists works in the exhibition.
www.kunsthalle-mannheim.eu