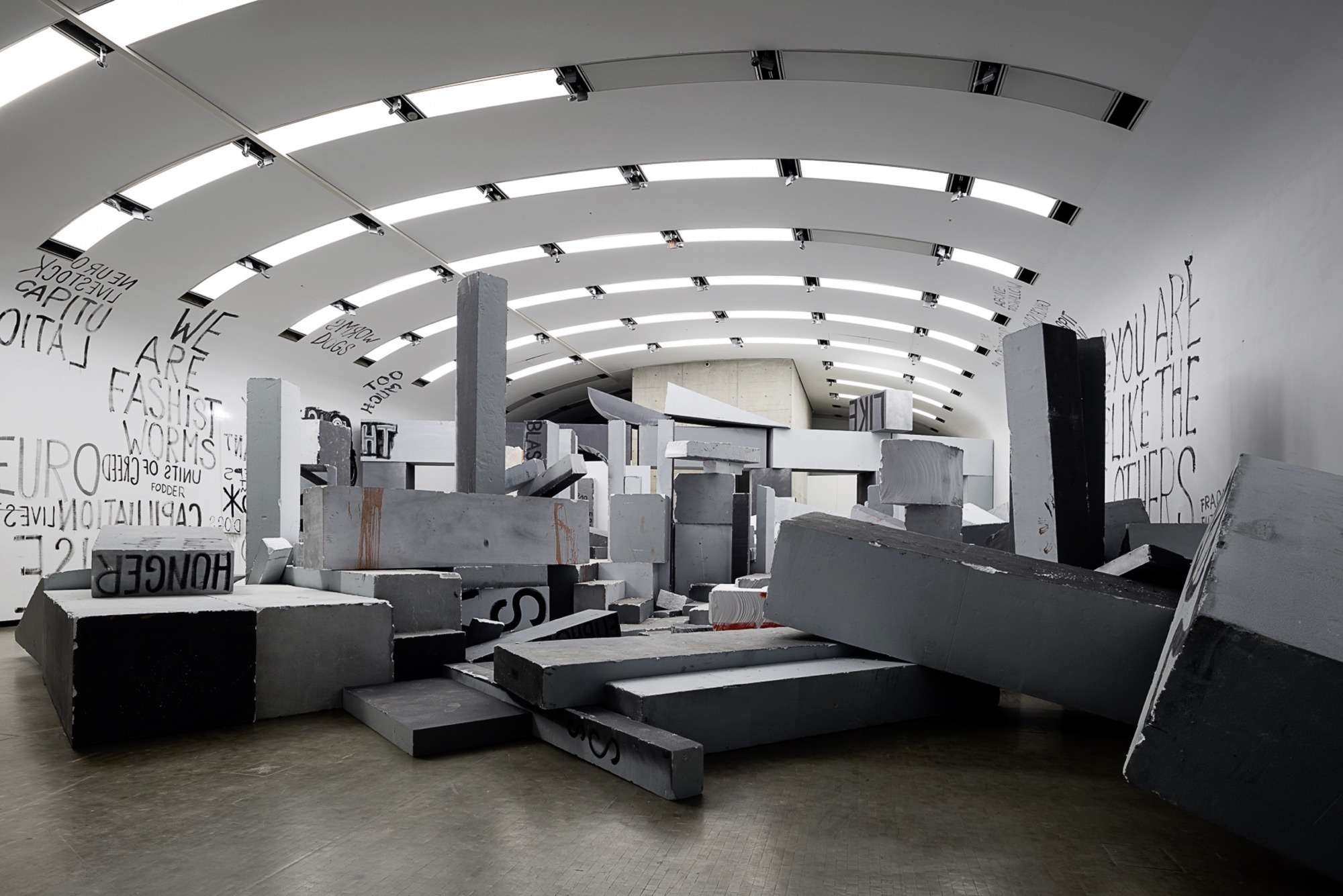 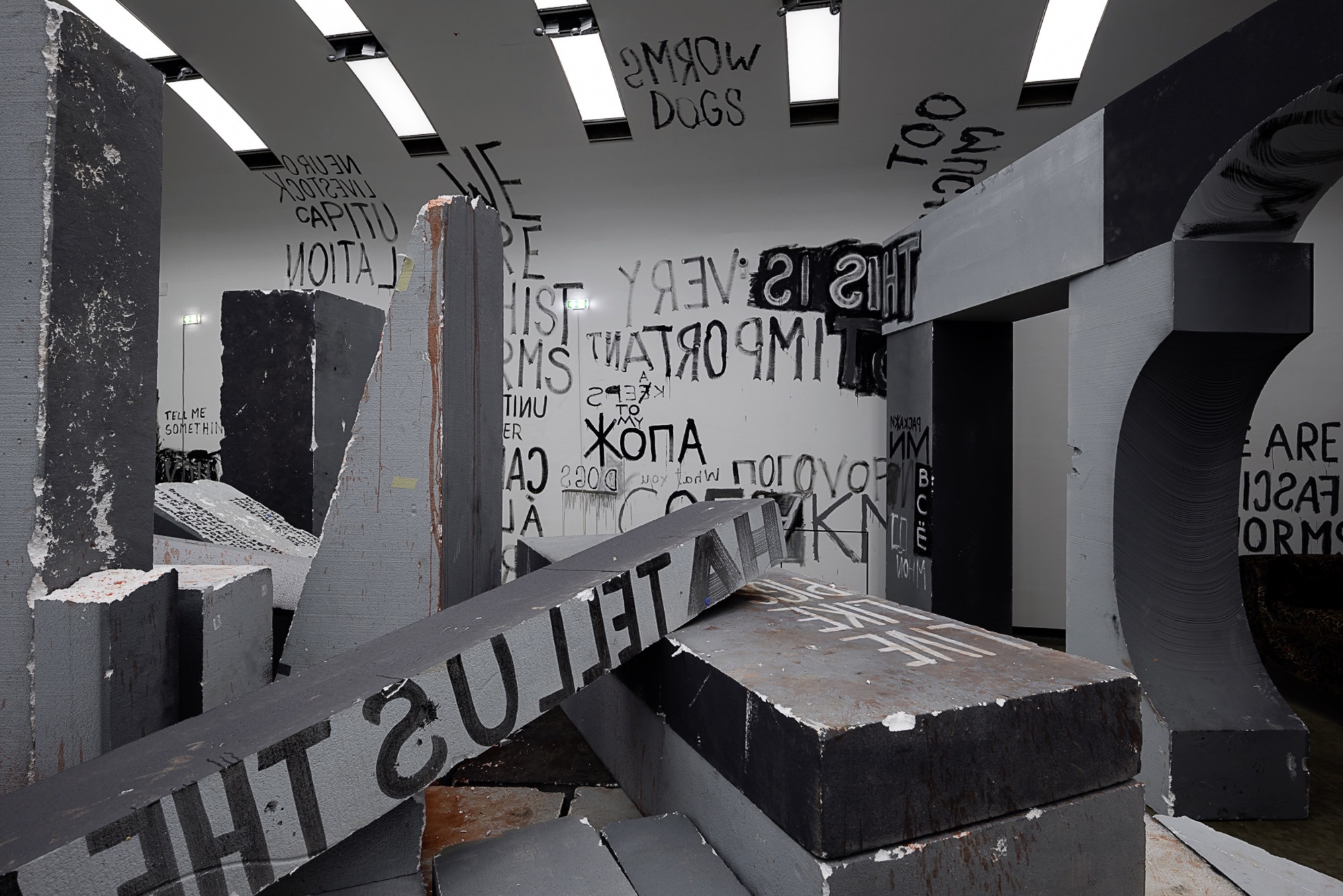 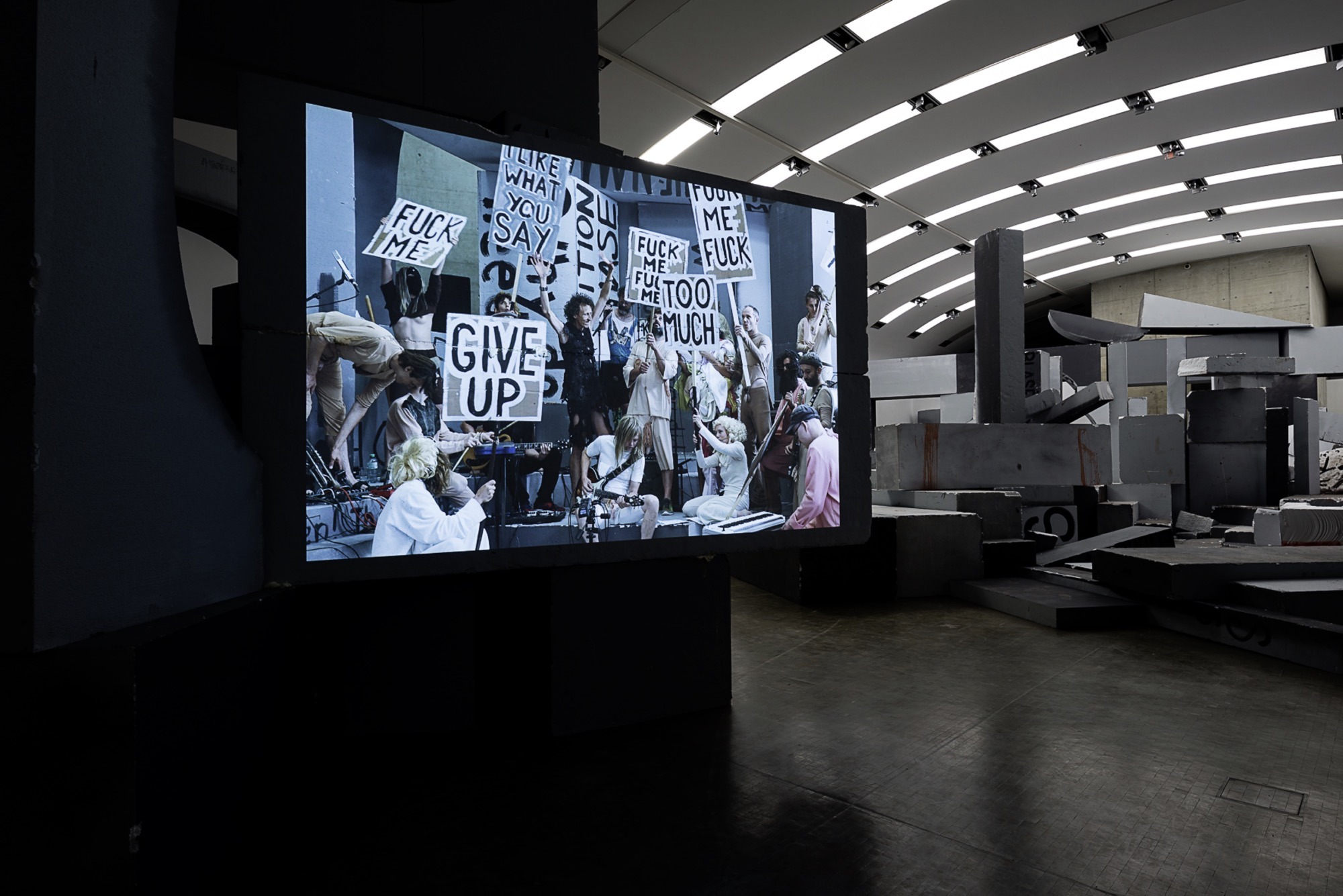 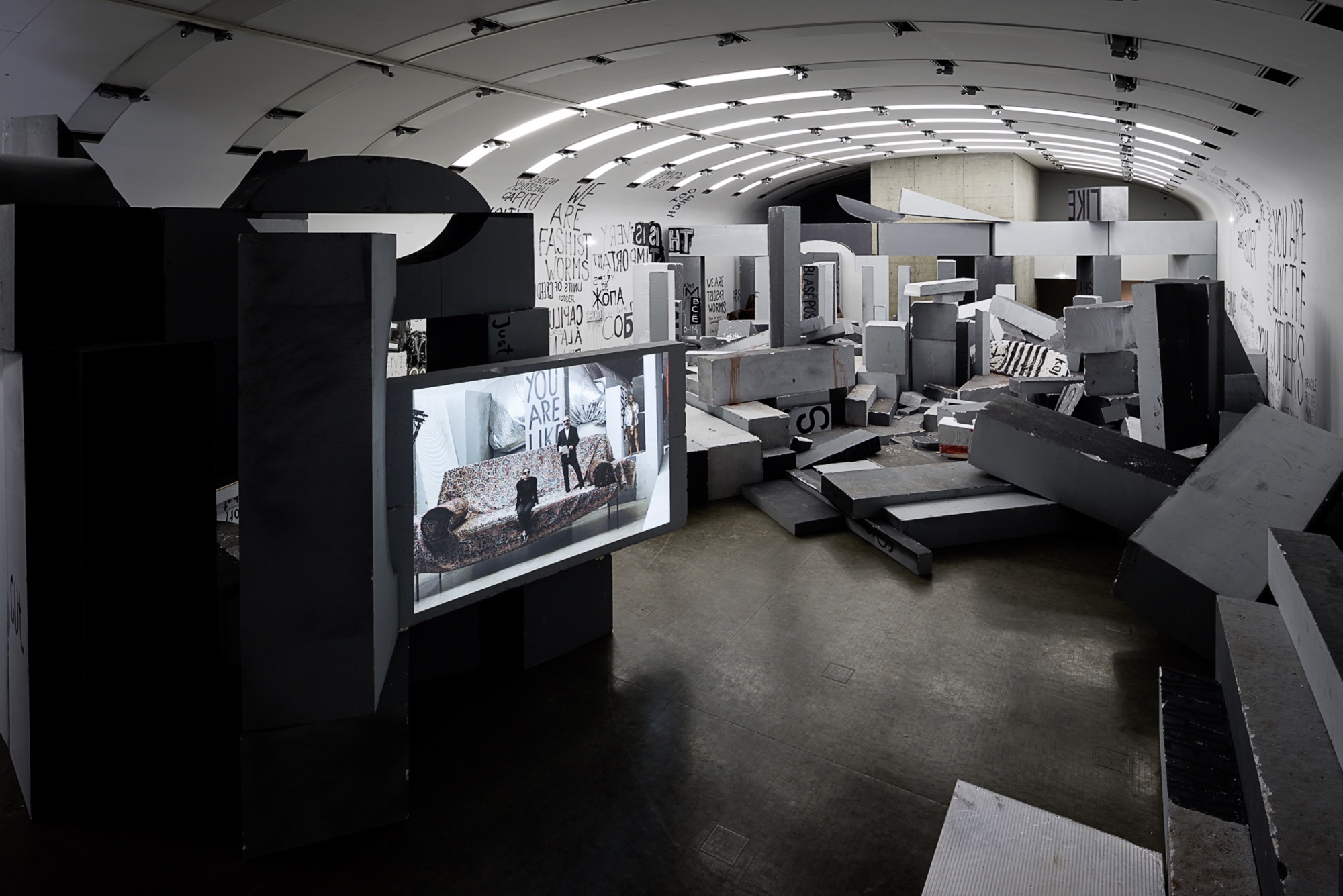 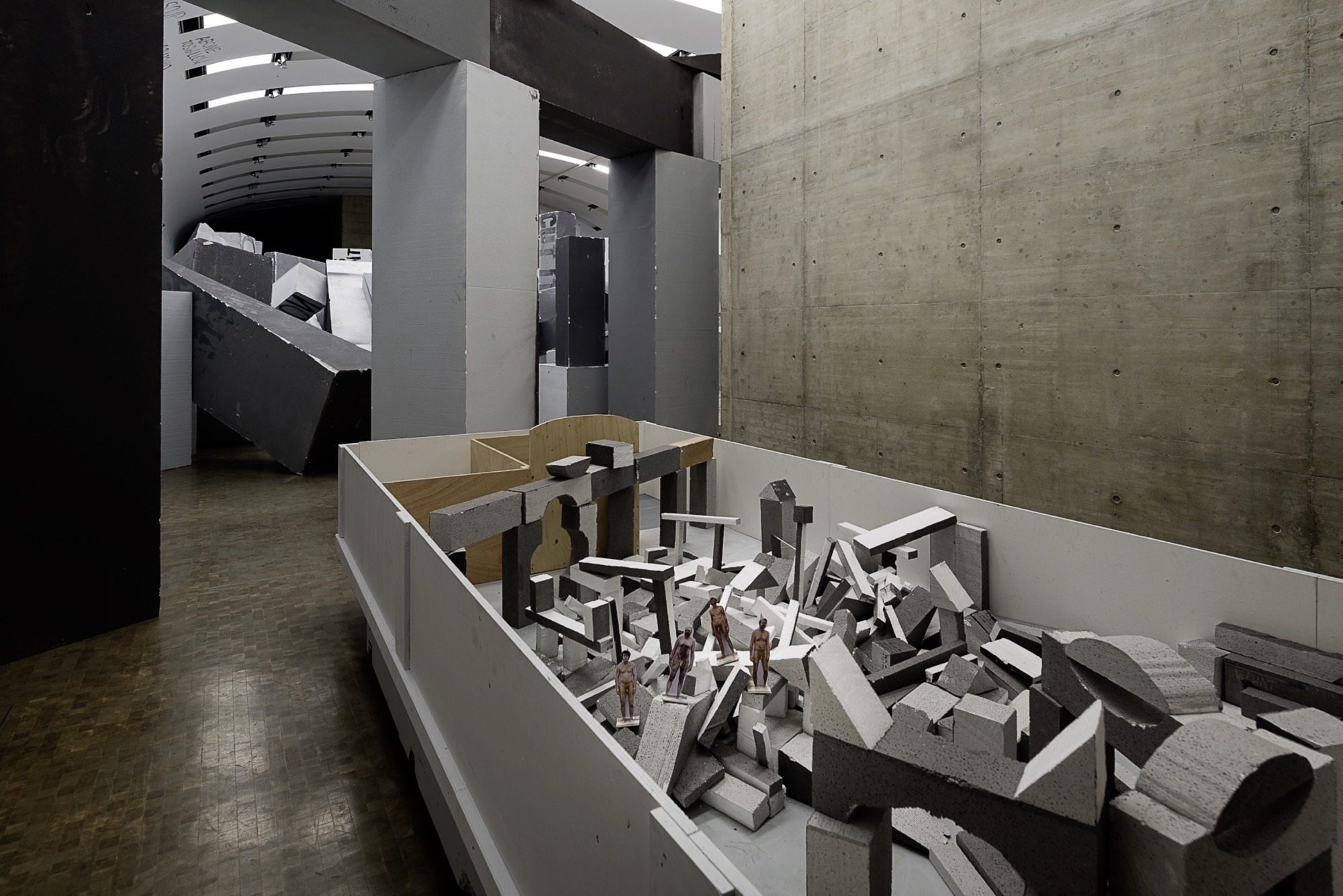 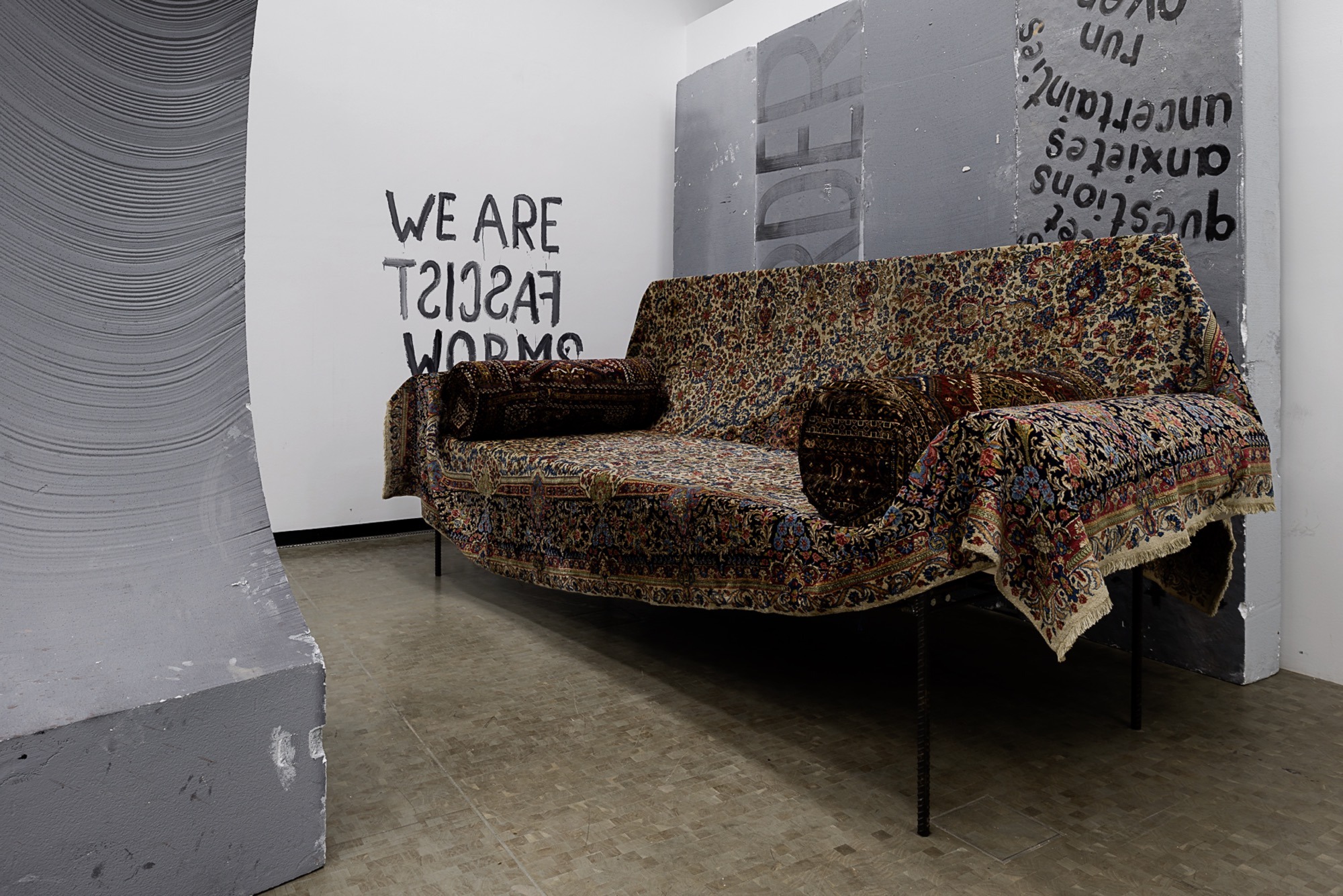 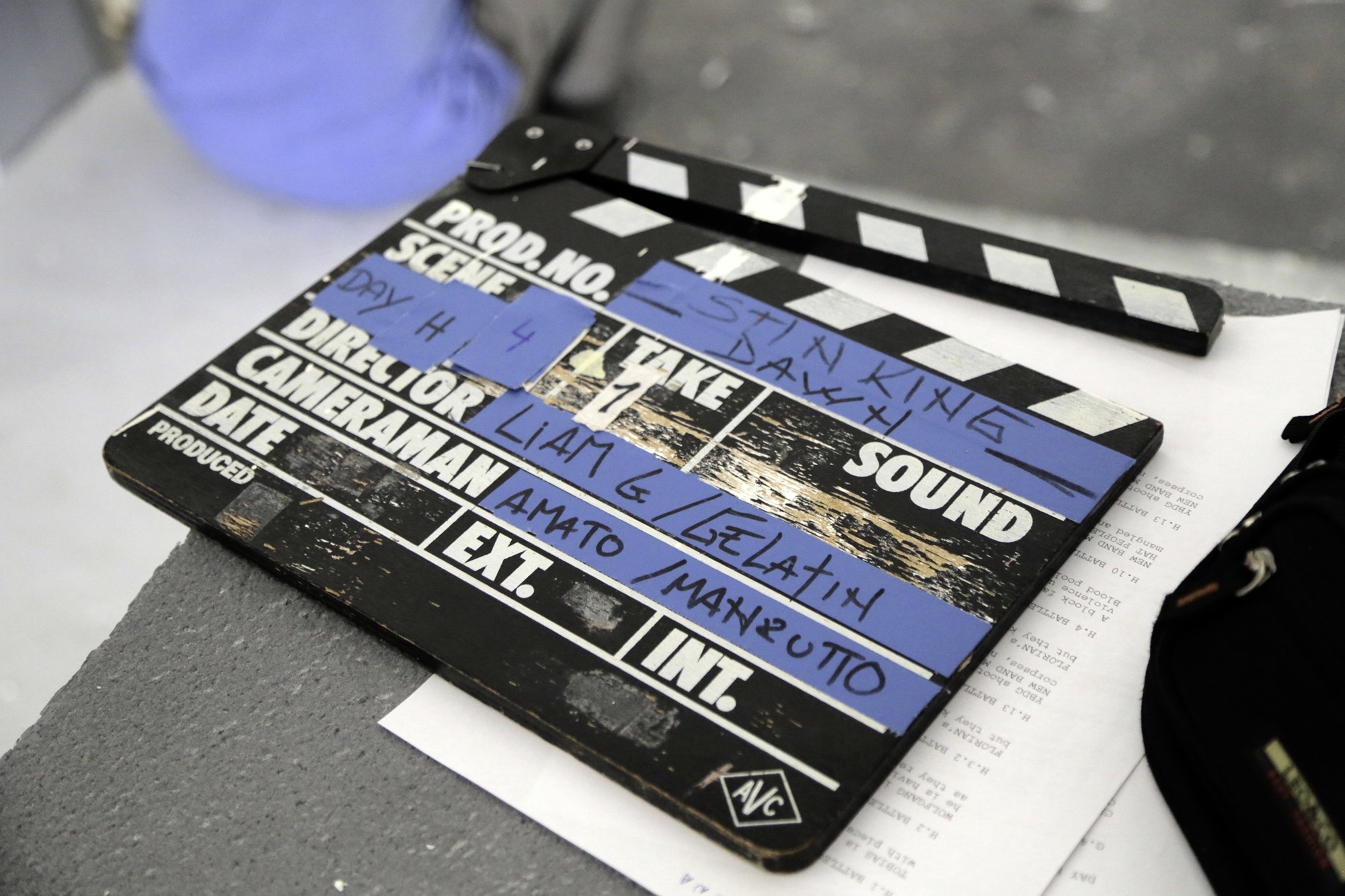 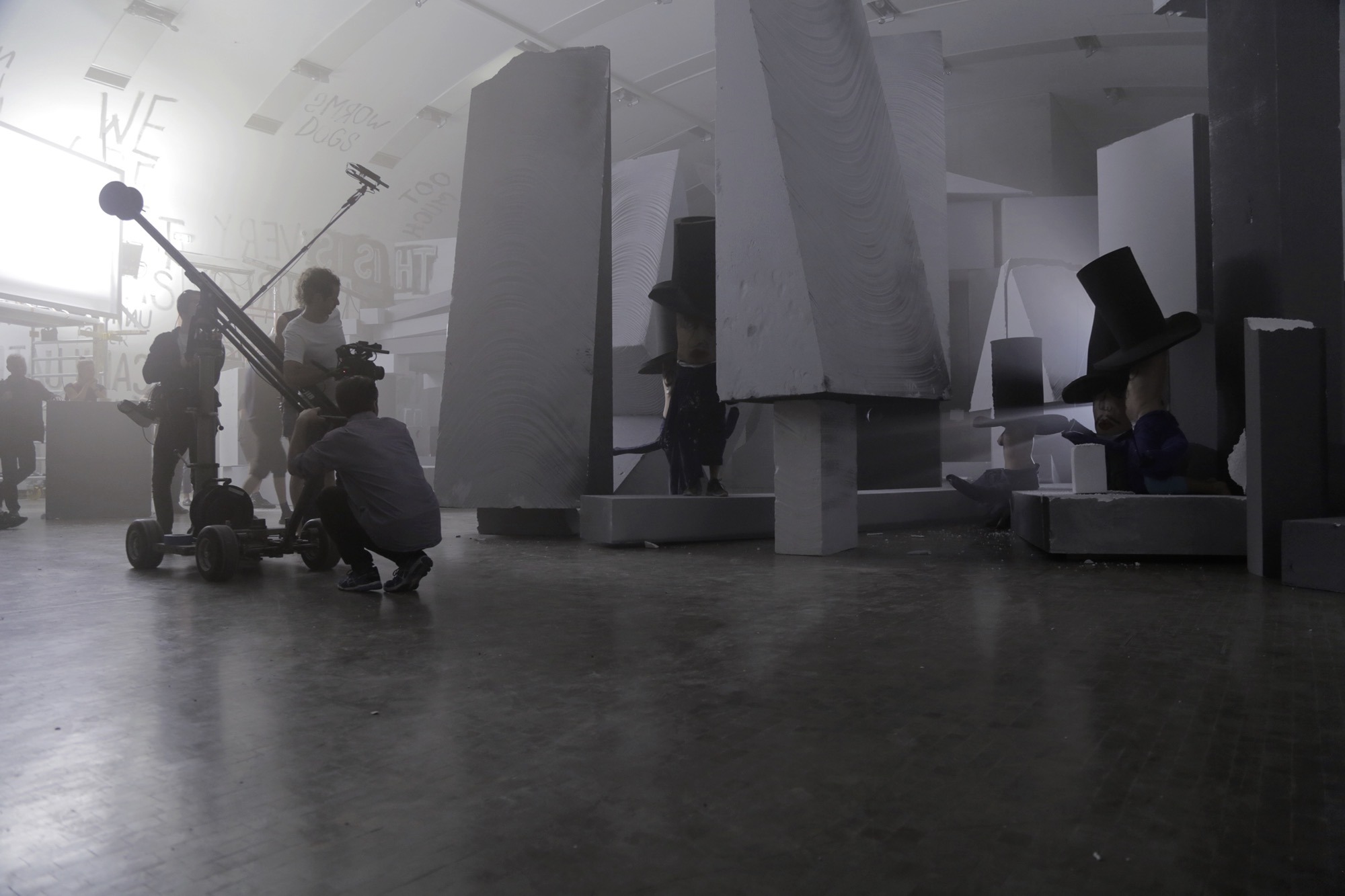 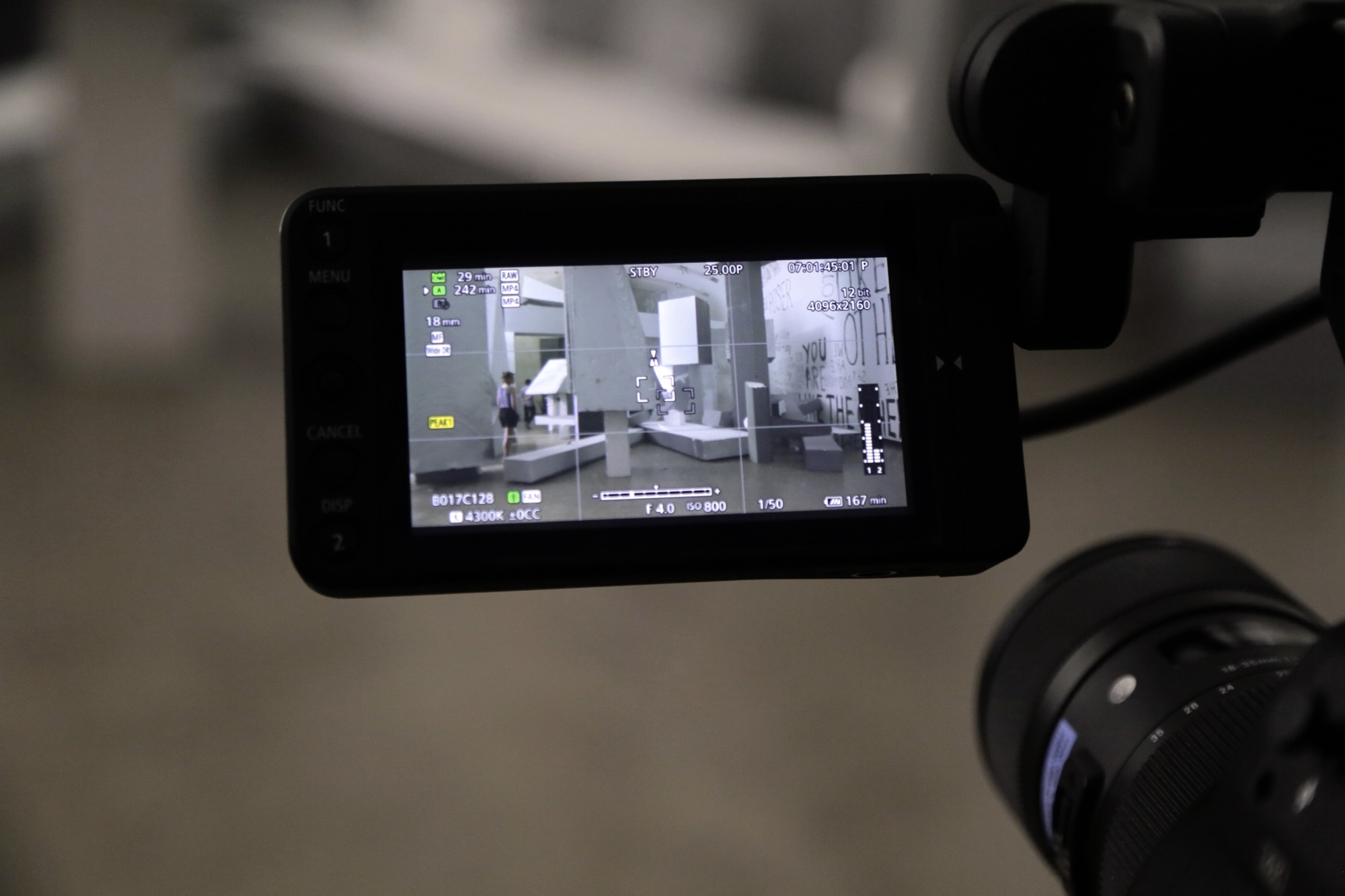 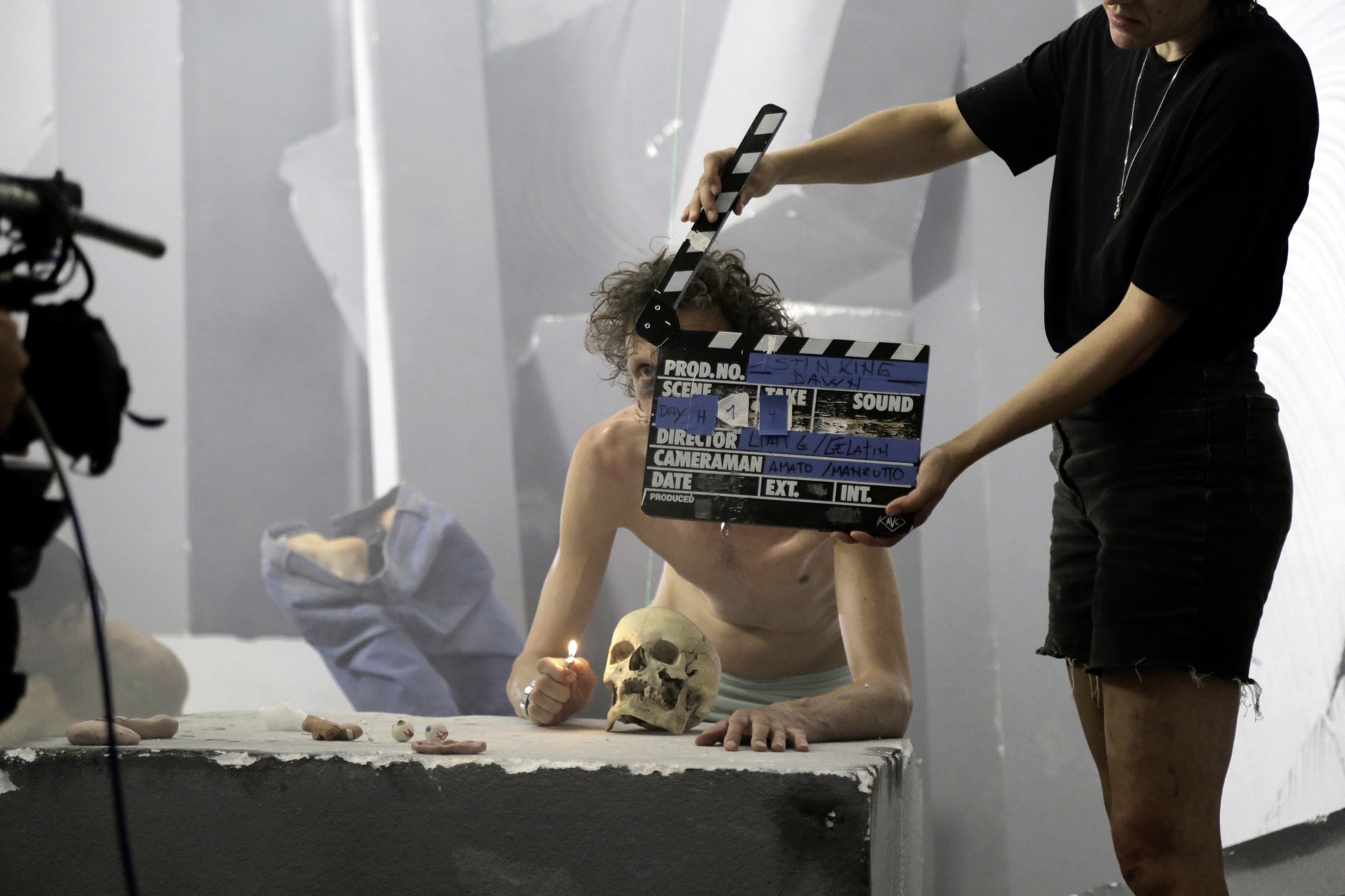 Stinking Dawn is an exhibition in the form of a production process for a full-length feature film by Gelatin and Liam Gillick. The collaboratively developed and improvised experimental film will examine the limits of human tolerance in the face of oppression, political crisis and excessive self-delusion. It follows the destiny of four privileged young people who grow up at a time of crisis and move through various stages of development and self-reflection towards a final moment of collapse.

During the shooting period (July 4–13), the artists were joined by many artist friends and long term collaborators. All visitors to the exhibition were potential extras inside a sprawling modifiable stage setting—a faux-stone toy-block architecture of colonnades, amphitheaters, night-club interiors, and a prison. After the film shoot, the postproduction begins. The exhibition for the remaining duration shows the looming grey and graffitied remnants of the production. A large slideshow of photographs is projected within the monumental setting providing insights on the filming process. Musical instruments in the space haphazardly play while visitors are able to walk among the tattered sculptural traces of the scenery that gave the film its peculiarly striking mise-en-scène.

Gelatin are four Vienna-based artists. They first met in 1978, when they all attended a summer camp and have been working together ever since. Their practice incorporates the codes of relational aesthetics, their invented sculptural language and approach that is anarchic and irreverent. Gelatin has exhibited internationally in institutions including the Museum Boijmans van Beuningen, Rotterdam; the Fondazione Prada, Milan; the Musée d’Art Moderne de la Ville de Paris; Kunsthaus Bregenz; Kunsthalle Krems; and the 21er Haus, Vienna. Their work was included in Manifesta 11 in Zurich, the 49th and 54th Venice Biennale, the 1st Moscow Biennale, the Aichi Triennale, the Gwangju Biennale, the Shanghai Biennale, the Liverpool Biennial and EXPO 2000.

Based in New York, Liam Gillick deploys multiple forms to expose the new ideological control systems that emerged at the beginning of the 1990s. His work exposes the dysfunctional aspects of a modernist legacy in terms of abstraction and architecture when framed within a globalised, neo-liberal consensus. His work has been included in documenta and the Venice, Berlin and Istanbul Biennales; he represented Germany in Venice in 2009. Solo museum exhibitions have taken place at the Museum of Contemporary Art in Chicago, the MoMA in New York and the Tate in London.

Pay as you wish: Each Sunday you decide on the admission fee and pay as much as you want for your exhibition visit.
www.kunsthallewien.at