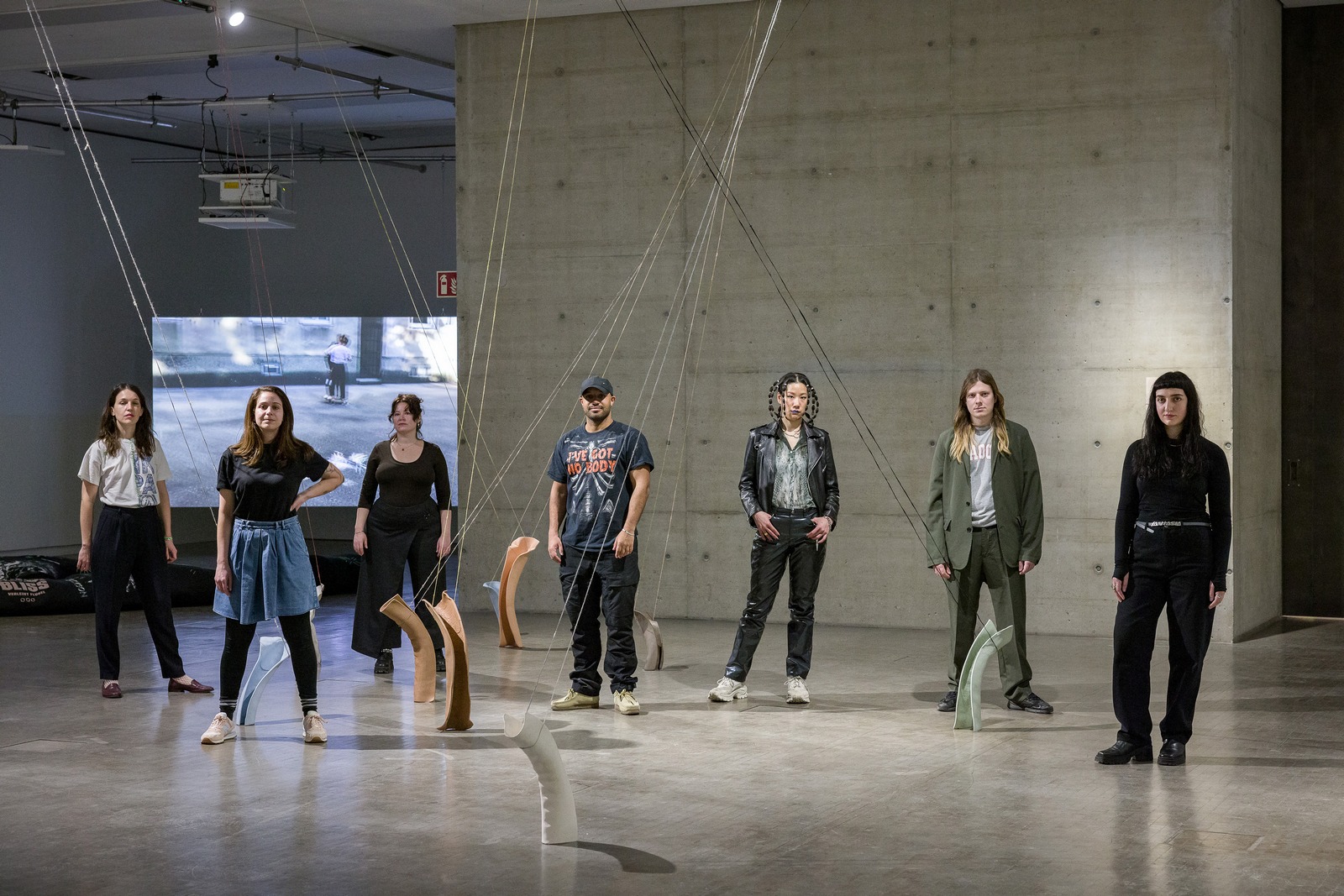 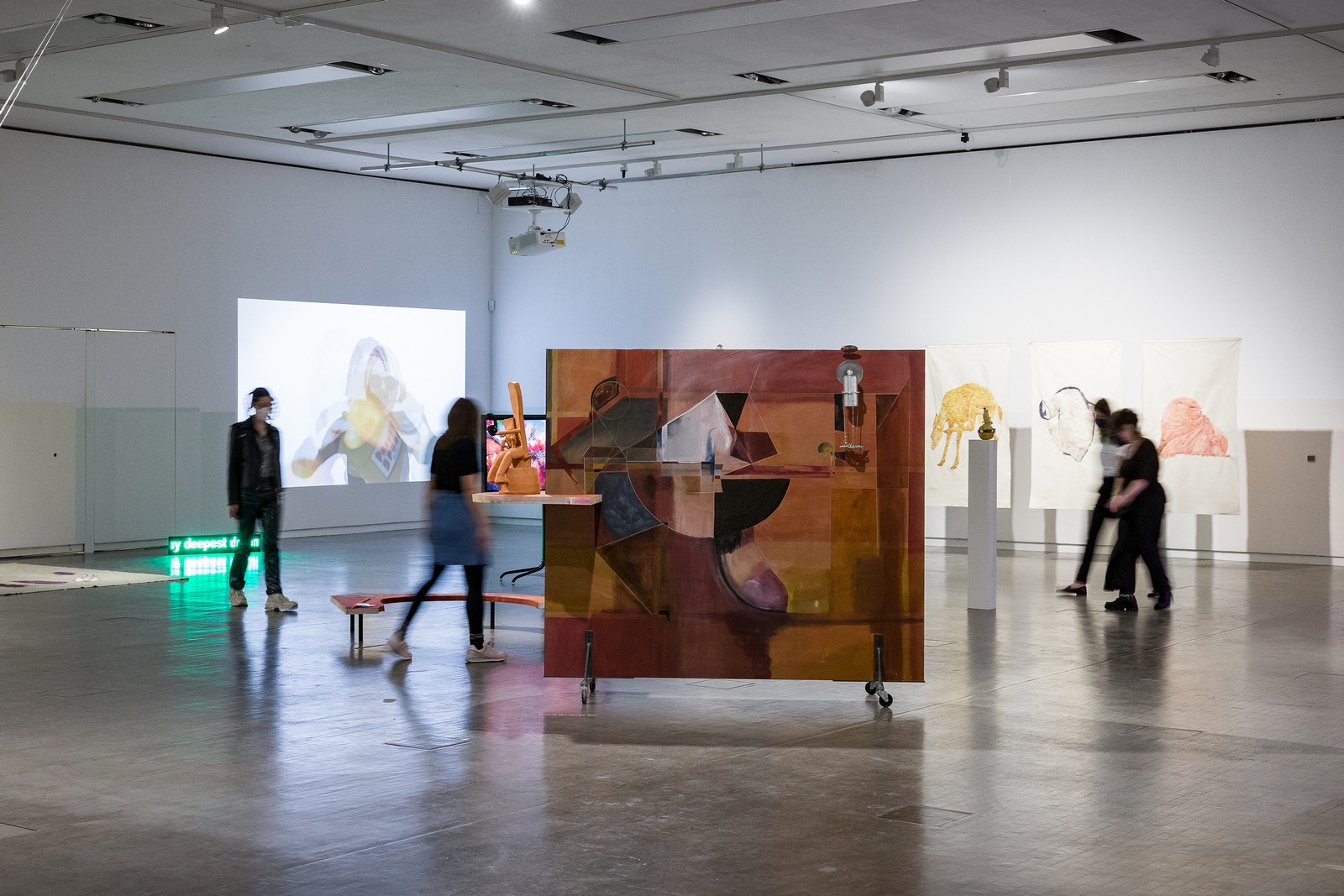 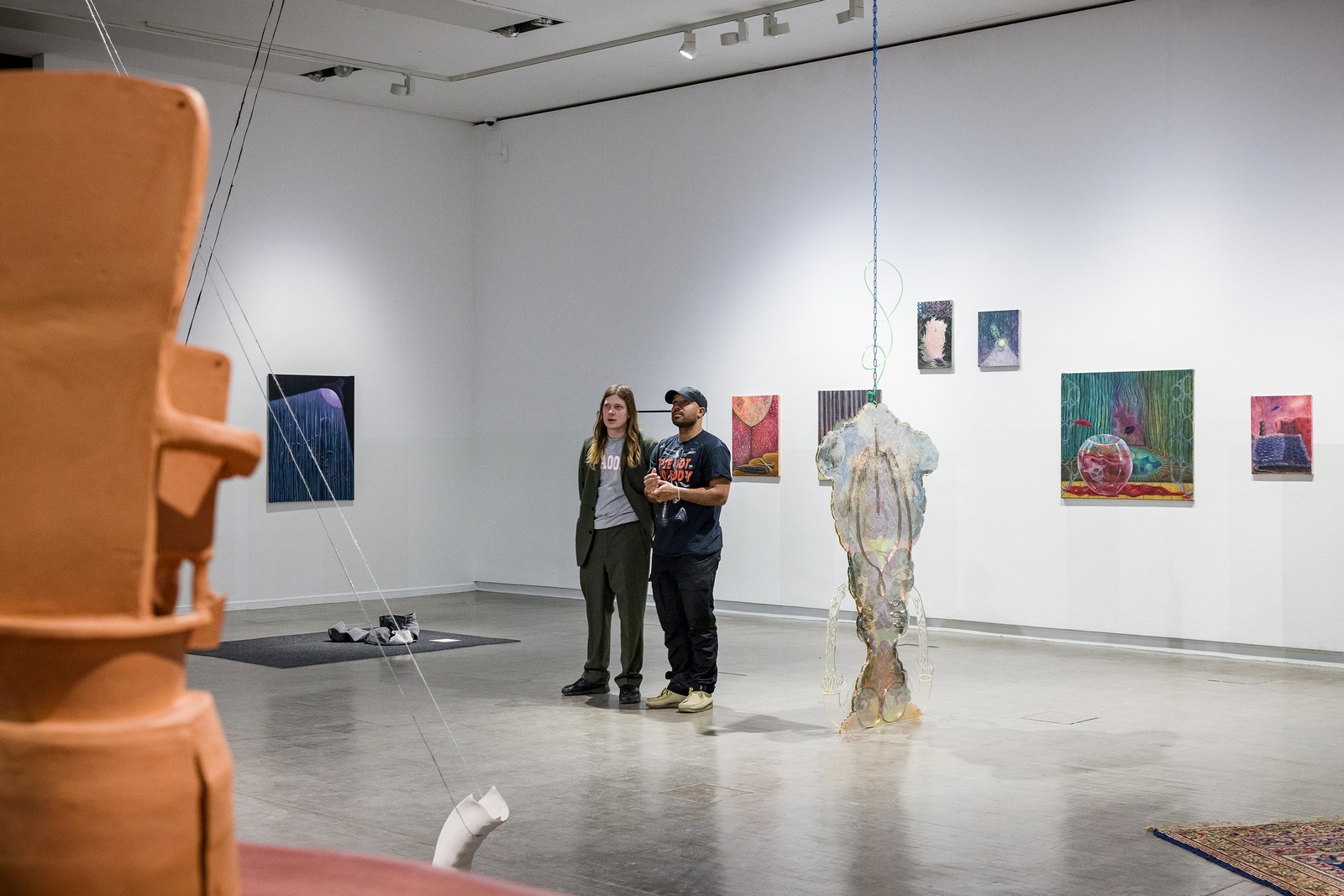 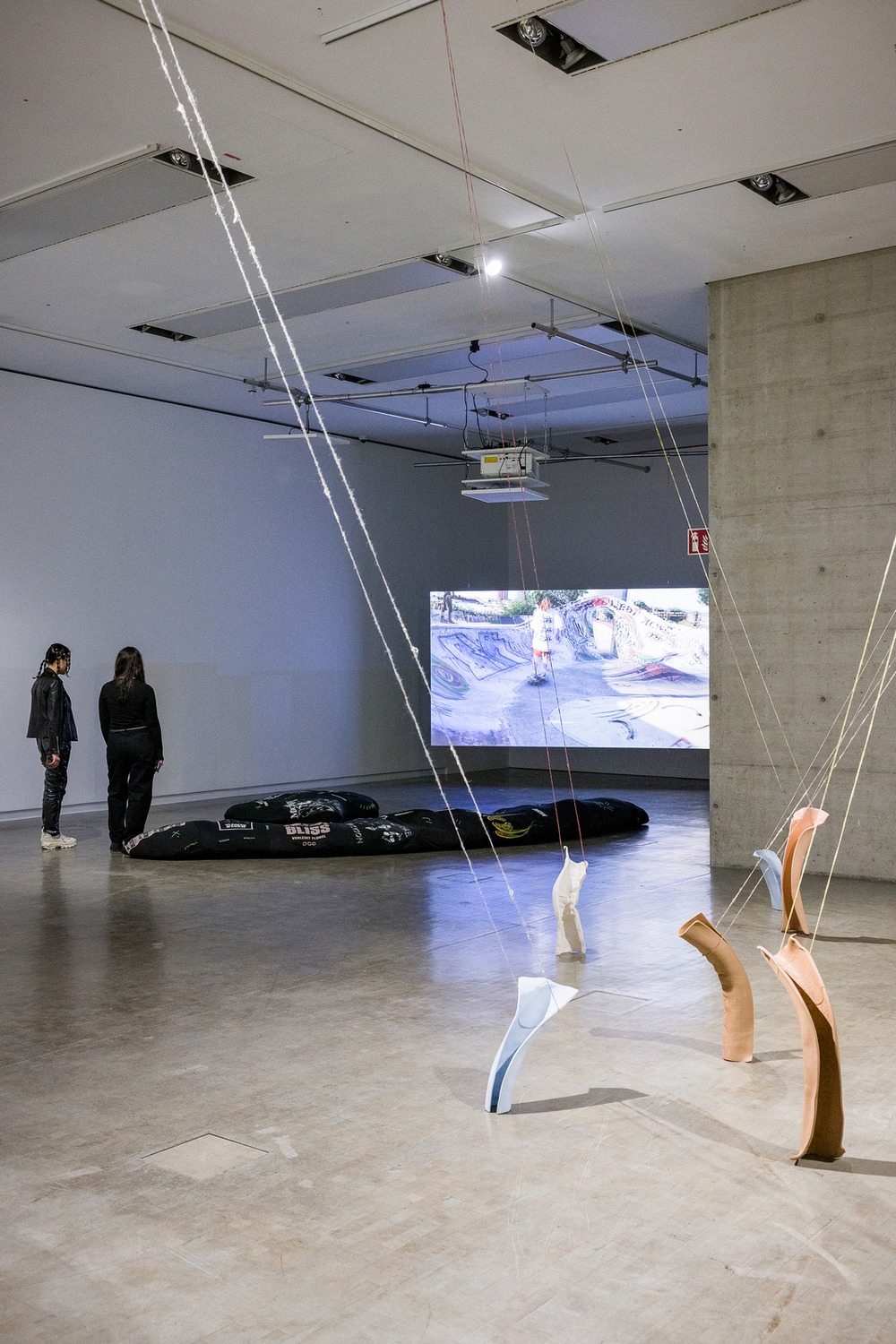 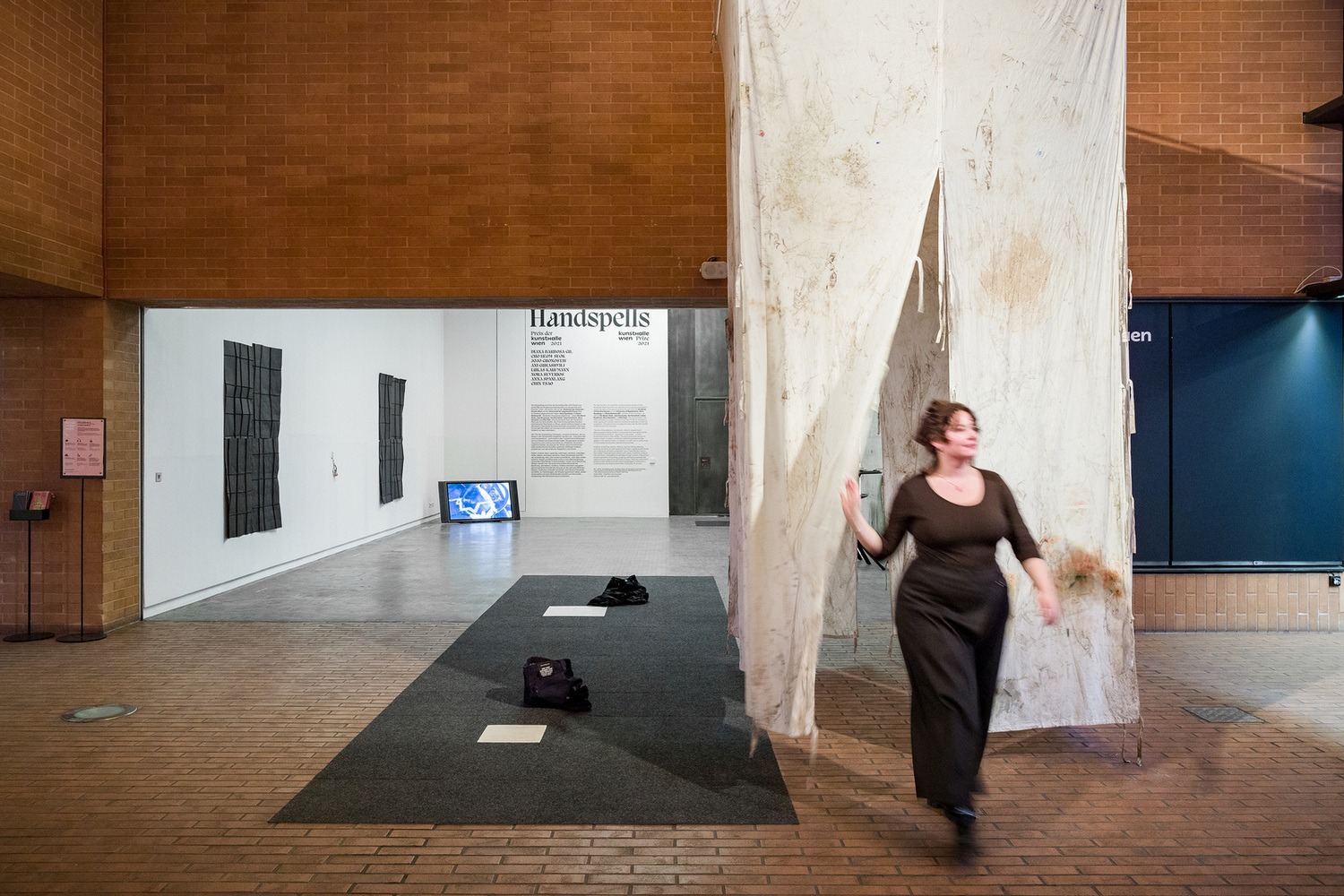 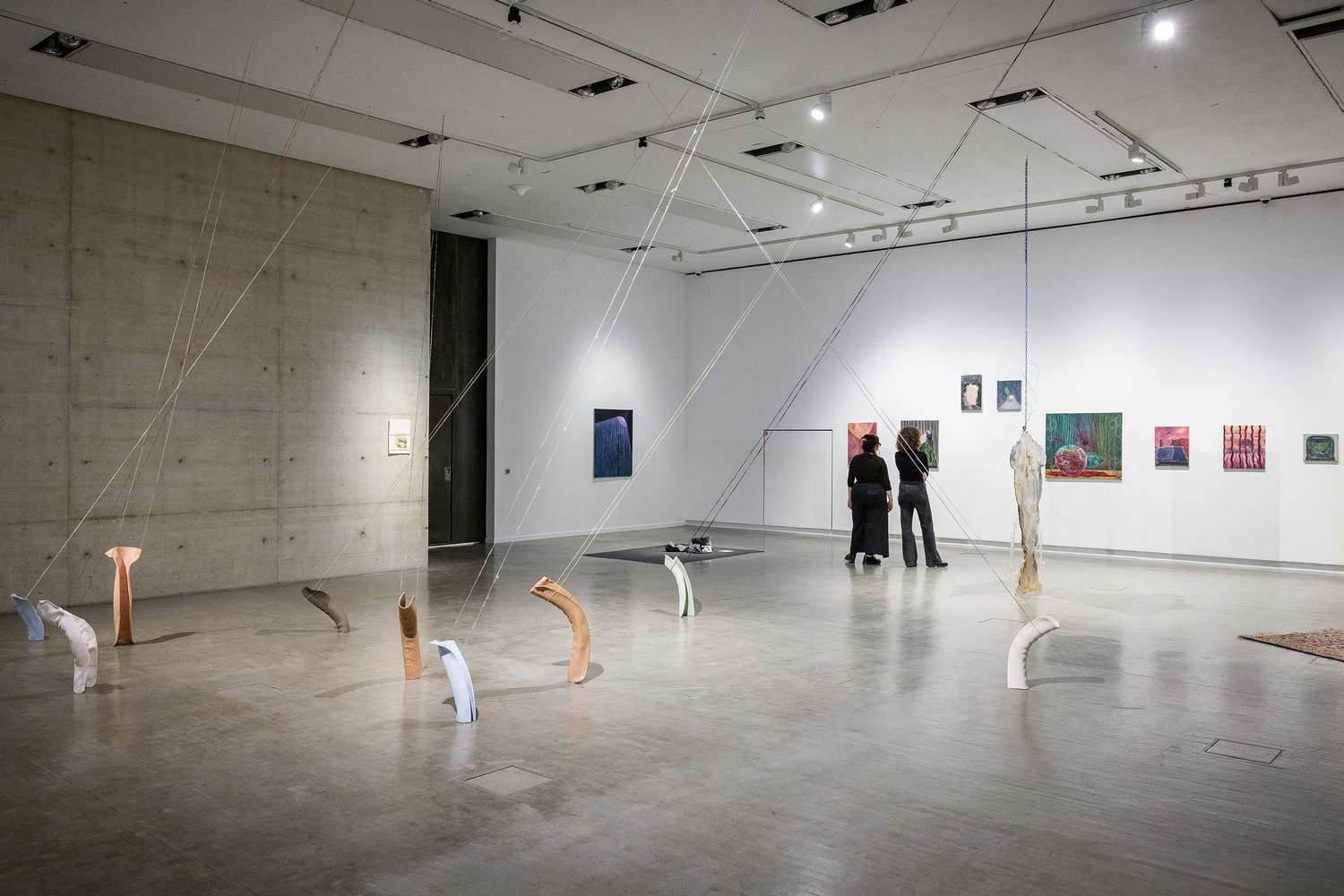 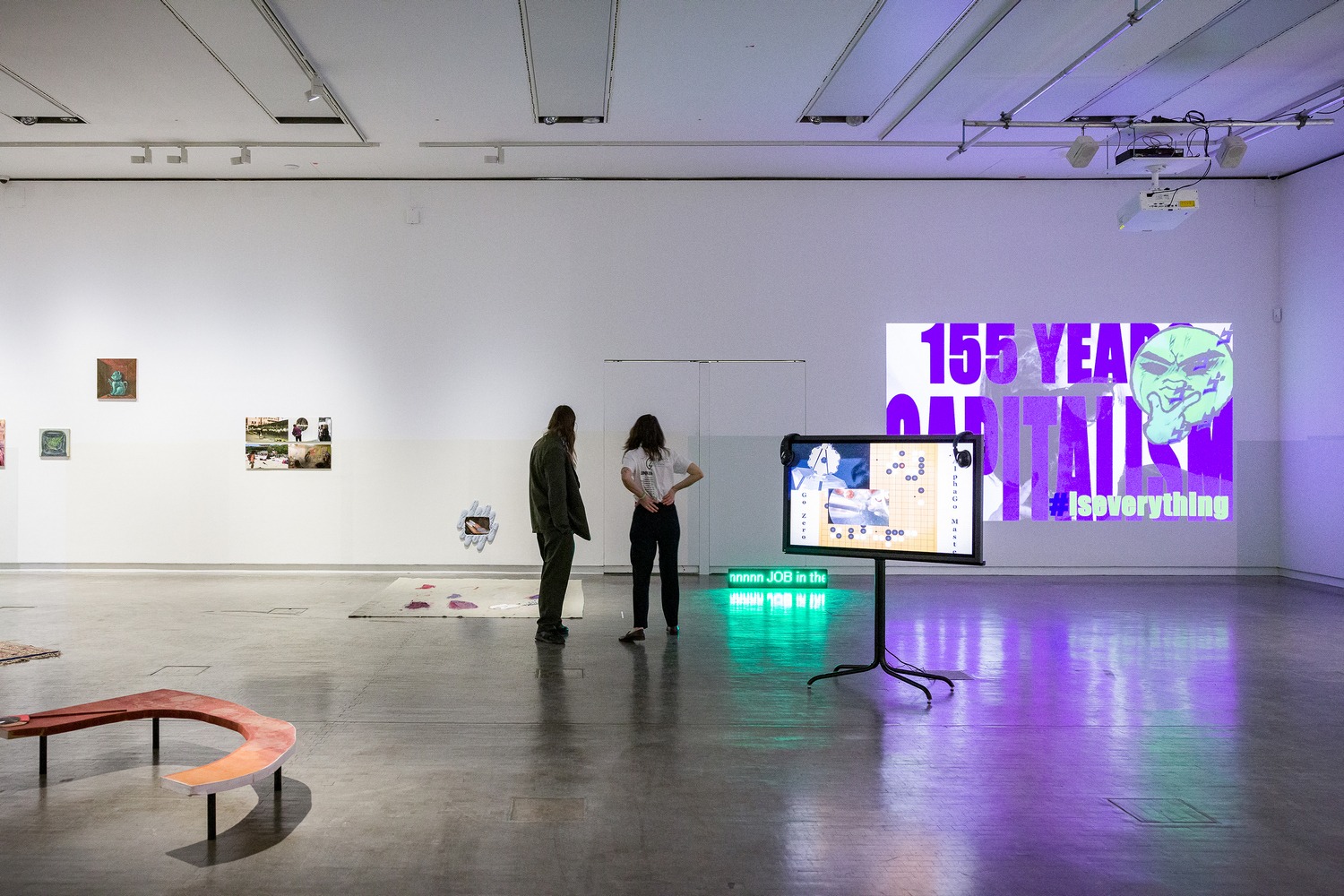 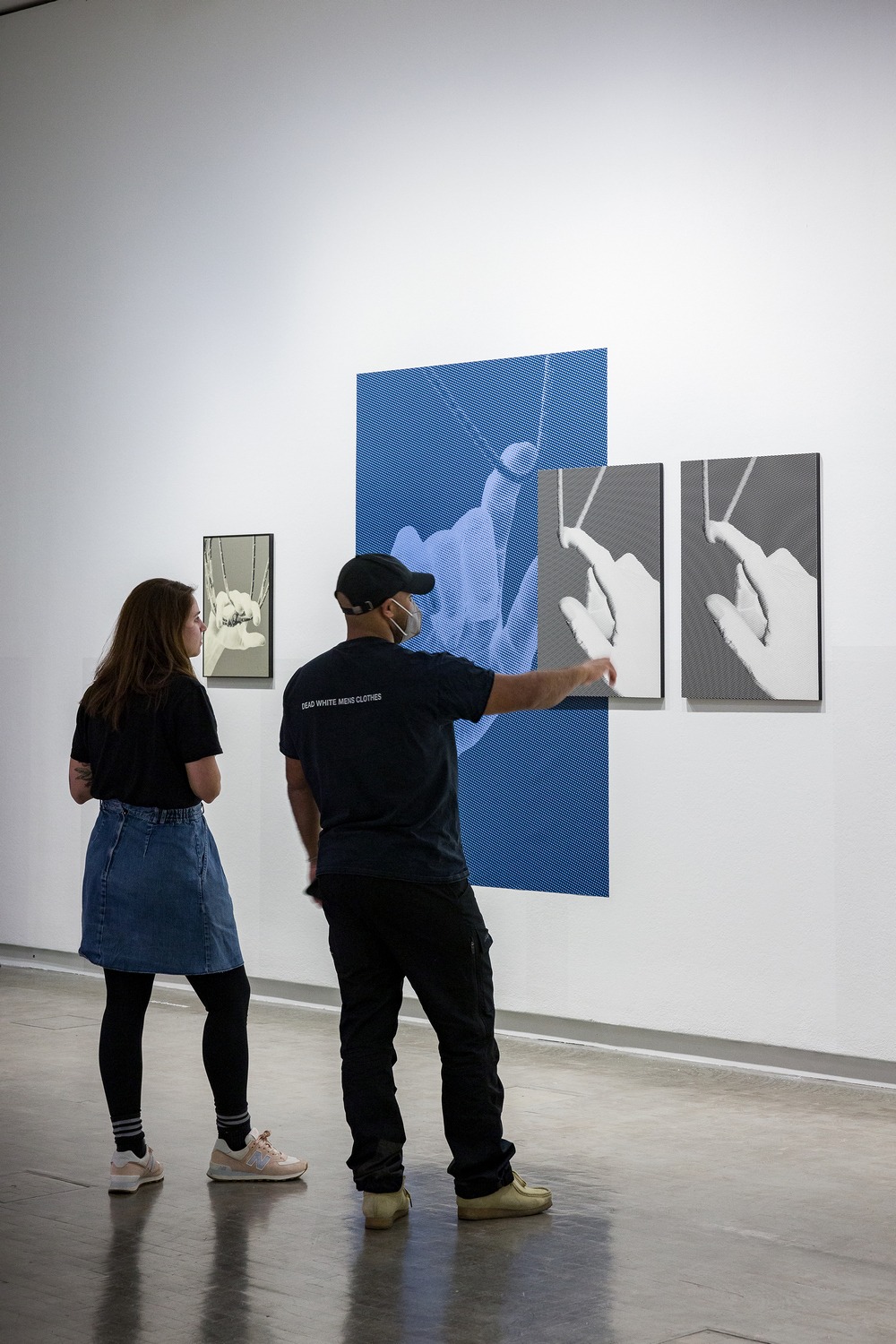 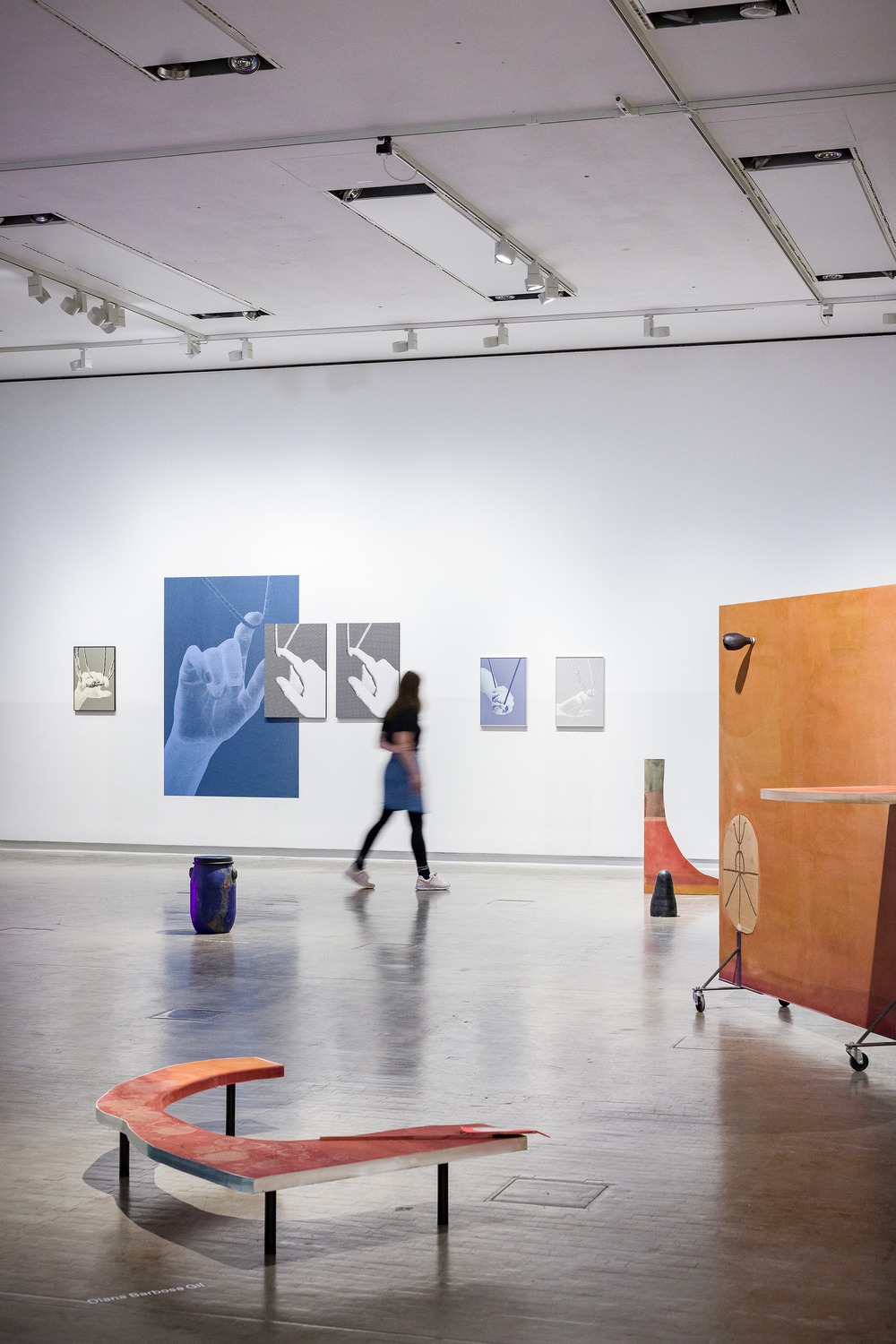 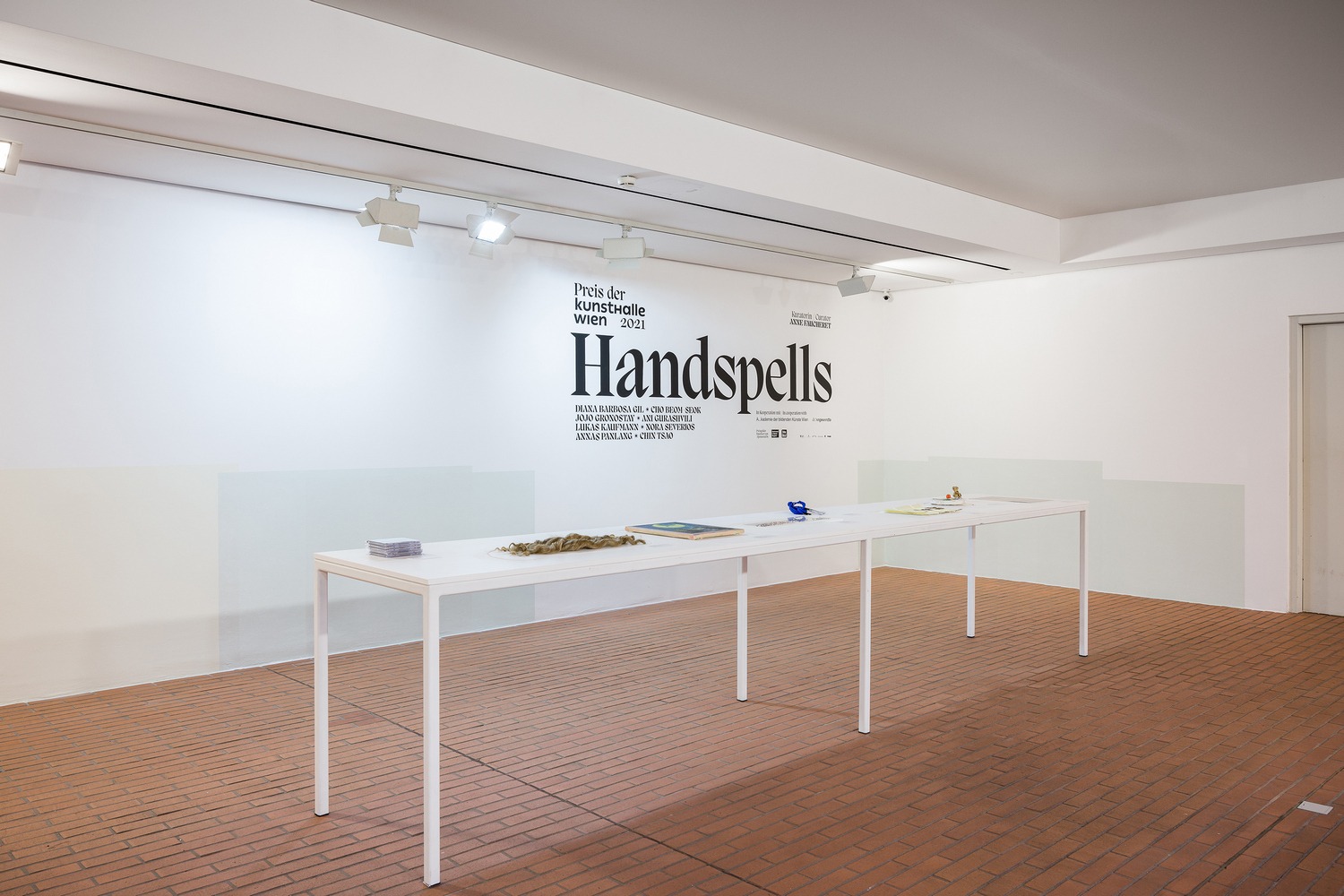 For the first time, the exhibition showcasing the winners of the Kunsthalle Wien Prize 2021 will take the form of a group presentation, gathering eight artists, who graduated last year either from the Academy of Fine Arts Vienna or the University of Applied Arts Vienna: Anna Spanlang and Diana Barbosa Gil – winners of the first prize – as well as Cho Beom-Seok, Jojo Gronostay, Ani Gurashvili, Lukas Kaufmann, Nora Severios, and Chin Tsao.

The title of the exhibition, Handspells, refers to sequences of gestures performed by bodies or body parts that have performative or transformative effects – expected or unforeseen – on their environment and on other bodies. The works presented reenact or inquire simple, mundane, sometimes repetitive gestures as they appear in the realms of work, of creation, of craft, and in a wide range of other productive but also reproductive activities. When these gestures affect the real, they get imbued with some sort of magic, they become connection, they create relation and can be seen as spells. Handspells also evokes chiromancy, where the inscriptions of gestures, of techniques, of habits, of narratives in the palm become signs that can be interpreted. The exhibition is about bringing close 2 to each other touch and vision, language and body, magic and labor, and about emphasizing the creative dimension of the ordinary, the transformative dimension of iteration, and the political dimension of sharing body techniques.

Holding, scratching, making, drawing, writing, folding, weaving, stroking, touching, but also reading with fingers, speaking with hands, are crossing the artworks presented, more or less literally, more or less visible. These gestures interact with matter, transform surfaces into interfaces, (re)establish knowledge through contact. They induce another semantics of touching, grasping, and feeling and favor the regime of touch against the centrality of vision. They also (re)connect bodies to other bodies and help repair damaged connections or invent new ones beyond domination, extraction, or service.

Jointly organized by the Academy of Fine Arts Vienna, the University of Applied Arts Vienna, and kunsthalle wien, the annual Kunsthalle Wien Prize has been awarded by a jury since 2014

The prize exhibition has been extended to a larger selection of artists in order to represent a wider spectrum of artistic positions among the graduates of both art academies. The new format privileges the many over the few and the collective over the individual.

What, How and for Whom / WHW, the directors of the kunsthalle wien, on this decision: “We consider it a crucial institutional task to support young artists on their way. Therefore, it was a special concern of ours not to just highlight two selected positions, but to gather others and organize a group show where all artists get equal attention. The new format challenges the common economy of art awards, where full attention is placed on the winners, whereas the shortlisted positions become invisible.

The group show is a framework fostering conversations, exchanges, and discussions, which have been sorely missing in the recent period and are fundamental to any cultural practice. Working on a group show means crossing gazes and standpoints, looking at one’s own practice through the lens of others’, finding a balance between the particular and the whole. Also, the exhibition will be the starting point for further collaborations between the artists and the team of kunsthalle wien in organizing public events and in activating the show in different ways.

For kunsthalle wien, gathering young artists from the same generation who have lived in the same city for some time is an occasion to offer an insight into the young contemporary artistic scene and to gain insight into what they are moved by, interested in, and stand for.” Johan F. Hartle, Rector of the Academy of Fine Arts Vienna, adds: “The Academy of Fine Arts Vienna is very pleased by the new Kunsthalle Wien Prize exhibition format and looks forward to the presentation of four outstanding artistic profiles. The exhibition at kunsthalle wien Museumsquartier offers our graduates a prominent public forum. The positions selected for presentation are diverse, but they share a particular attention to the ordinary, to what passes unnoticed or fades into oblivion. The works range from a humorous and playful 3 montage of mobile phone video clips by Anna Spanlang to Cho Beom-Seok’s documentary black-and-white film inside a black box, from a fragile sculptural installation of ceramics by Nora Severios to Jojo Gronostay’s sprawling intervention composed of jeans sculptures and photographs. The Academy is proud of its graduates and the wide range of the creative positions showcased in the Kunsthalle Wien Prize 2021 exhibition.”

Eva Maria Stadler, Vice Rector of the University of Applied Arts Vienna: “The Kunsthalle Wien Prize offers the University of Applied Arts an invaluable opportunity to initiate an ongoing exchange between the curators at kunsthalle wien and our graduates and teachers. We are especially pleased that Diana Barbosa Gil, who completed her studies in the in the Sculpture and Space program under the direction of Hans Schabus and who was nominated together with Ani Gurashvili, Lukas Kaufmann, and Chin Tsao, has won the first prize. Diana Barbosa Gil undertakes a nuanced inquiry into the interactions between Western, colonialist, and postcolonial cultural productions in light of her own experience as a Colombian-born artist. The changes to the award’s selection process proposed by kunsthalle wien, which are designed to nurture lasting relationships based on mutual commitment between the young artists and the institution, are an important signal for quality and artistic position in an age of fast-paced production.

Winner of the first prize of the Academy of Fine Arts Vienna: Anna Spanlang

Anna Spanlang (*1988 in Grieskirchen, Austria, lives in Vienna) studied video and video installation as well as art and digital media with Dorit Margreiter and Constanze Ruhm at the academy of fine arts Vienna as well as at the CENART in Mexico City. Diploma in June 2021 with Dorit Margreiter. Member of YOUKI, FC Gloria, Mala Sirena, Green Scream.

Anna Spanlang’s works seek to limn a poetics of the ordinary while underscoring the political dimension of an everyday life in which community, friendship, and feminism are actually lived and not just discussed. To make her films, she uses deft editing to reinterpret originally autobiographical video material; her sharp wit and embracing empathy are unmistakable in the footage, which she recorded on her mobile phone.

Winner of the first prize of the University of Applied Arts Vienna: Diana Barbosa Gil

Diana Barbosa Gil (*1990 in Cali, Colombia, lives in Vienna and Lisbon) studied transmedia art with Brigitte Kowanz at the University of Applied Arts as well as teaching Spanish and Fashion&Styles at 4 the Academy of Fine Arts Vienna. In 2021, she graduated from the Department of Sculpture and Space under Hans Schabus at the University of Applied Arts Vienna.

Diana Barbosa Gil creates performative and sculptural installations that function as a kind of highly personal coordinate system by setting various ideas, techniques, objects, styles, or motifs from different moments in history in interrelation. Loud and fragile at once, her work constellations tell stories of the quest for an origin and a defined place in the now, while also bearing witness to the absurd pressure artists struggle with today to keep producing new and better art.

Further prizewinners of the Academy of Fine Arts Vienna

Cho Beom-Seok
Cho Beom-Seok (*1986 in South Korea, lives in Seoul) studied sculpture at the Korea National University of Arts in Seoul (2013 Bachelor, 2015 Master). In 2021, he graduated from the Department of Art and Film at the Academy of Fine Arts Vienna with a project supervised by Thomas Heise.

Cho Beom-Seok is scouting for what, to him, is the perfect moment: when the filmmaker’s gaze through the lens of his camera dissolves. Each of his films starts with an encounter with someone or a group of people that then repeats itself. His focus, however, is on the shared voyage these encounters set in motion, through urban scenes and forests, through empty or crammed spaces, with many detours and incidents, which he montages in enigmatic ways so that their interconnections are not readily apparent or intelligible.

Jojo Gronostay questions the mechanisms of overproduction and profusion, globalization and circulation, exploitation and the logic of valorization—including in the art world. At the same time, he harnesses these mechanisms to cast deserted places, objects of informal labor, or unnoticed gestures in a new light: his works transmute traces of the capitalist disaster into tokens of a poetic resistance.

Nora Severios
Nora Severios (*1986 in Vienna) studied fine arts at the Academy of Fine Arts in Vienna. In 2021, she completed her diploma studies in the class for art and photography supervised by Martin Guttmann, Michael Höpfner, Saskia Te Nicklin, and Sonia Leimer. 5 Nora Severios investigates the points of contact between humans and other species—animals and plants—and the forms and practices that grow out of these encounters. Learning and practicing them, imitating them and reliving them in the imagination leads the artist to distinctive creations and a critical engagement with exploitation and extraction, in which she also challenges antitheses that have long been conventional (in the cultures of the West): nature vs. culture, wild vs. domesticated, production vs. reproduction.

Further prizewinners of the University of Applied Arts Vienna

Ani Gurashvili
Ani Gurashvili (*born in 1990 in Tbilisi, Georgia, lives in Vienna) graduated with BA’s degree in media arts from Tbilisi State Academy of Arts. In 2021, she received her painting diploma under the professorship of Henning Bohl at the University of Applied Arts Vienna. Currently, she is an artistic research Ph.D candidate at Zentrum Fokus Forschung under the direction of Ruth Anderwald and Leonhard Grond.

Ani Gurashvili’s paintings toy with the conventions of pictorial depiction and narrative. Defined by elisions, incisions, and latencies, her pictures move the beholder rather than telling stories or illustrating something. Gurashvili poses her mysterious protagonists as though on a stage, blurring the categorical distinctions between humans, animals, and objects as well as the differentiation between foreground and background. Her works are suffused with a kind of magical eeriness that captivates the beholder with magnetic force.

Lukas Kaufmann
Lukas Kaufmann (*1993 in Klagenfurt, Austria, lives in Vienna) studied at the University of Applied Arts. In 2021, he graduated from the class for transmedia art under the direction of Brigitte Kowanz. In 2018, he realized the project Lichtzeichen OT [Light Signs OT]. It has since then commemorated the synagogues destroyed in the so-called Reichspogromnacht [Pogrom Night] in Vienna‘s urban space.

Lukas Kaufmann’s watercolors and prints transform folds into reliefs, surfaces into volumes, the grid pattern into a motif, painting into sediment—effects achieved by a succession of precise techniques and interventions that are nonetheless open to happenstance and the peculiarities of the physical material. Combining the landscape with the aesthetic of the digital screen, a façade-like quality with paper, Kaufmann’s works are also projections of intimate psychological spaces.

Chin Tsao
Chin Tsao (*1989 in Taipei, Taiwan, lives in Vienna and Taipei) obtained her BFA in Taipei. In 2021, she completed her Master‘s degree at the TransArts department of the University of Applied Arts Vienna, 6 kunsthalle wien GmbH museumsplatz 1 • 1070 vienna www.kunsthallewien.at facebook.com/KunsthalleWien instagram.com/KunsthalleWien twitter.com/KunsthalleWien graduating with a project supervised by Roman Pfeffer and Kathrin Rhomberg.

Chin Tsao’s visual idiom interweaves familiar styles from the history of art with a techno-optimistic post-human aesthetic. Her ceramics, which resemble supersized amulets, explode the conventional understanding of passive functional objects. In her video The Land of Promise (2021), she stages a future alter ego schizophrenically caught up between the perfect embodiment of capitalist norms and their utter disintegration.

For detailed statements by the artists and a complete list of the exhibited works, please see the exhibition handout.