The Angle of the End Always Comes from Behind 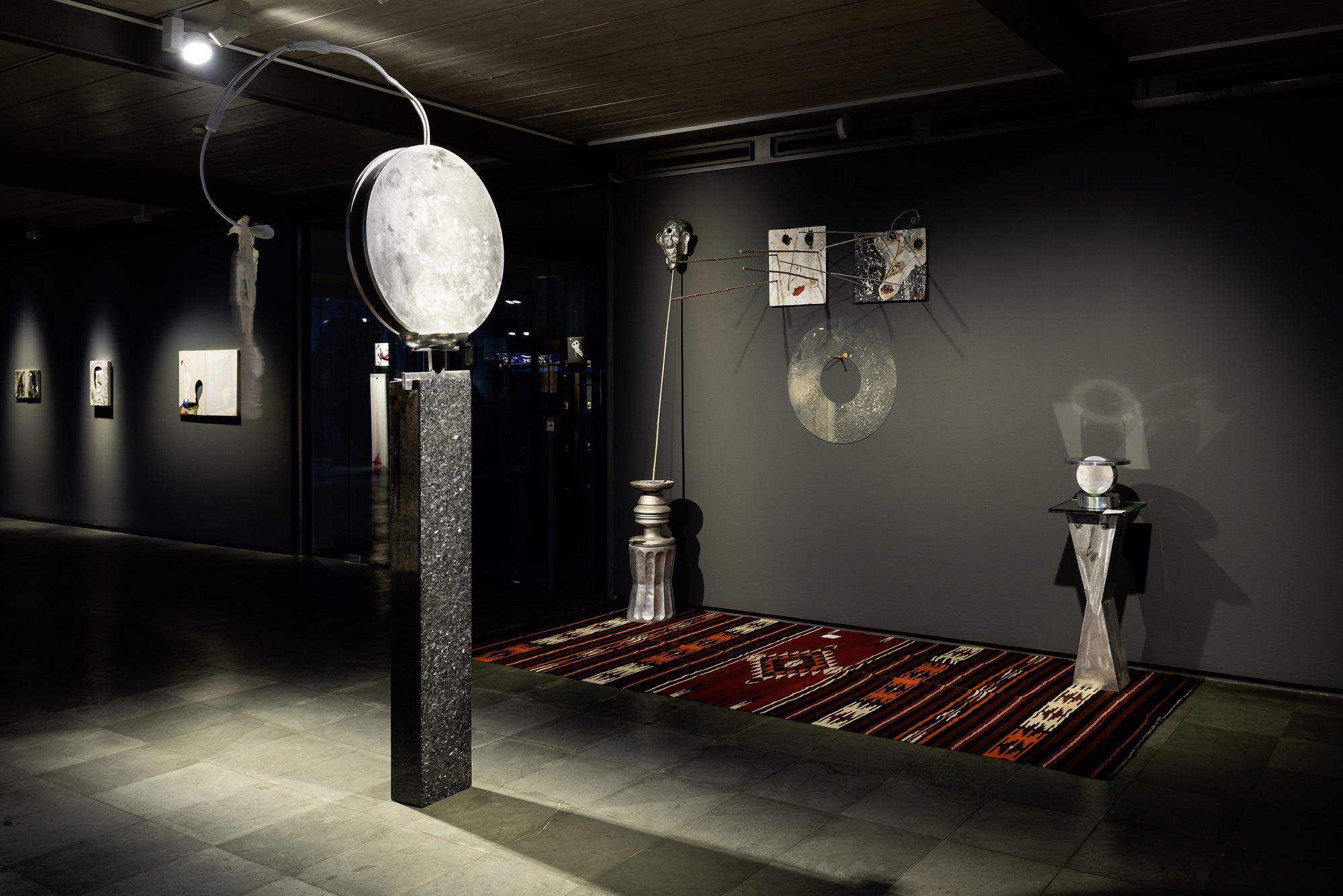 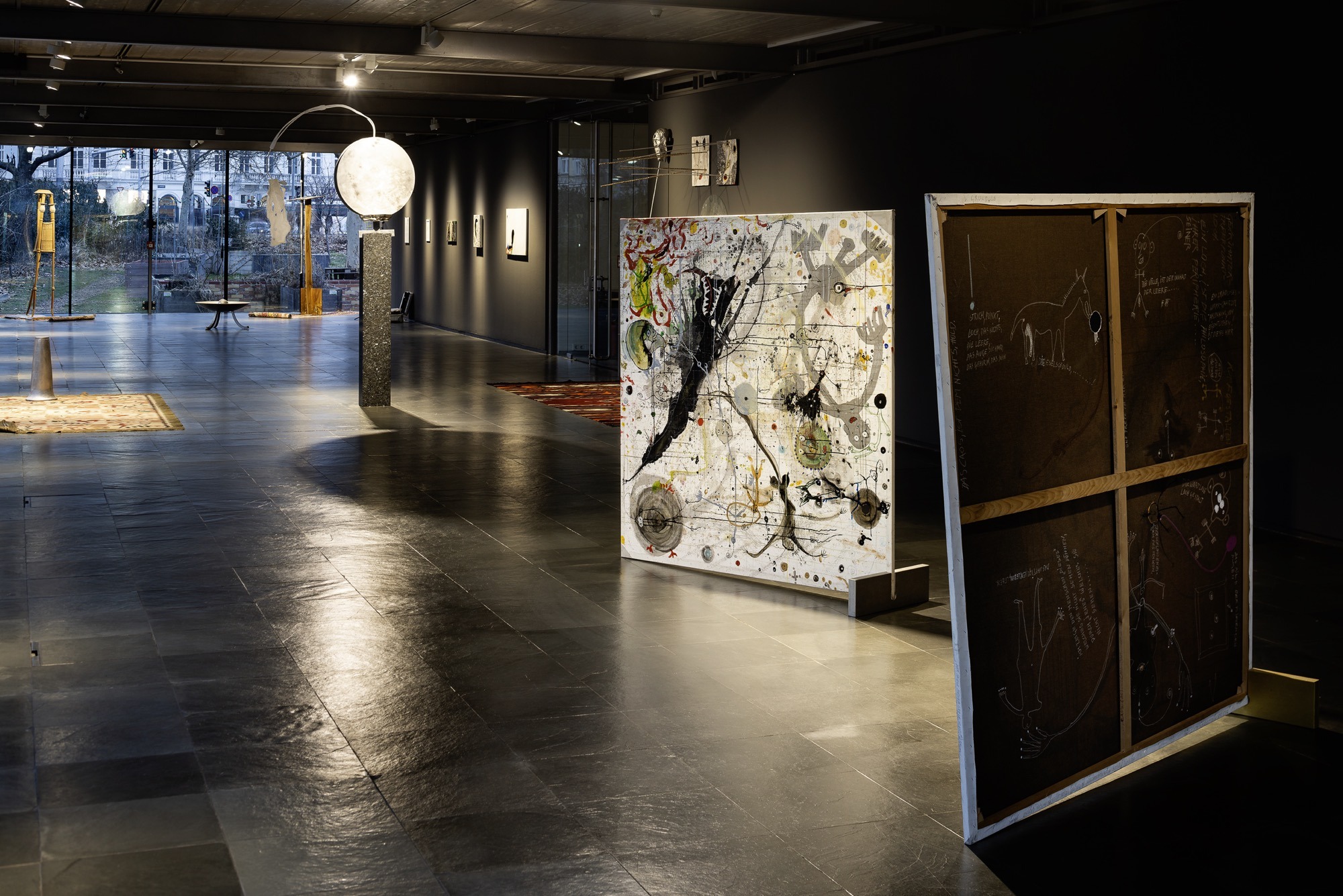 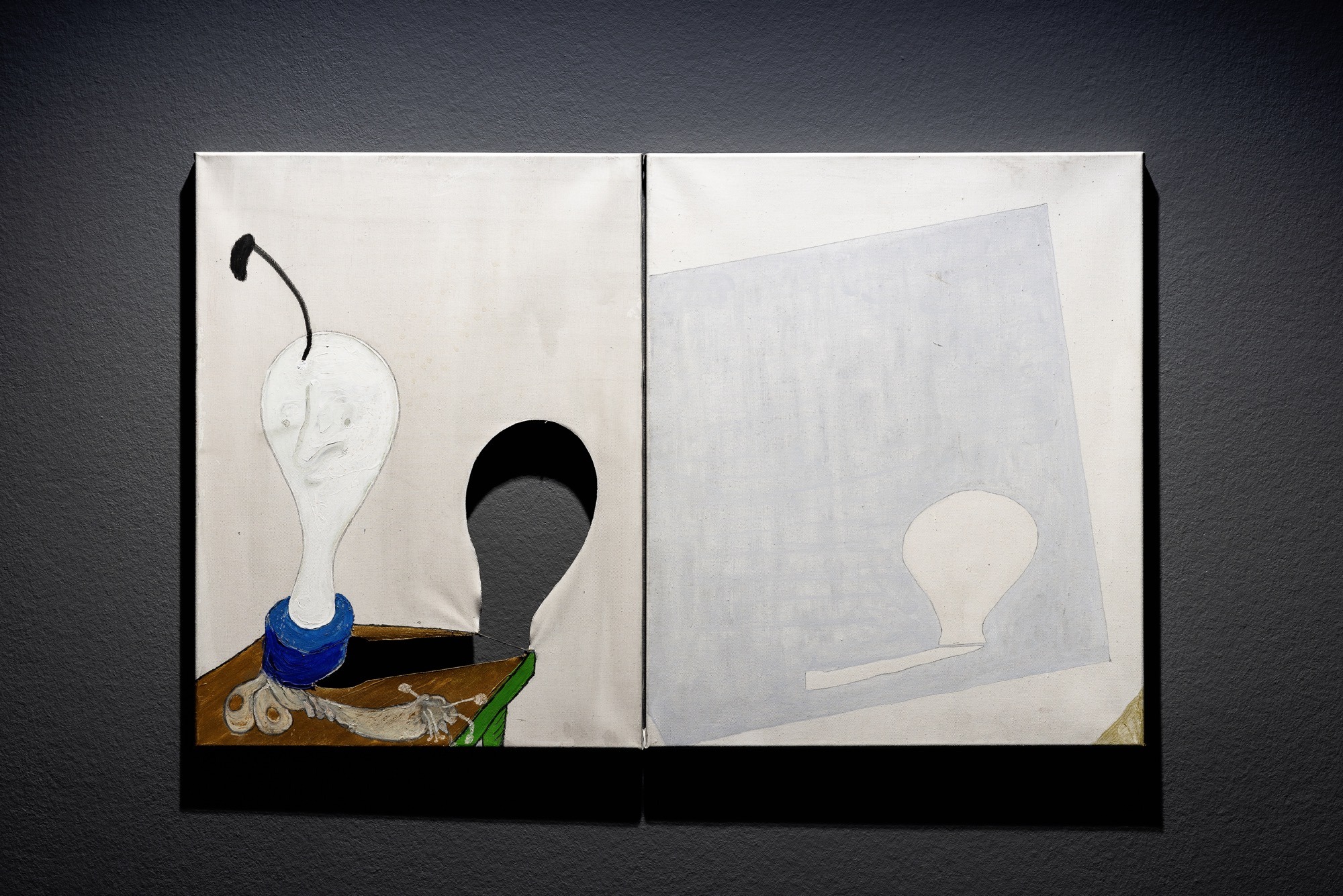 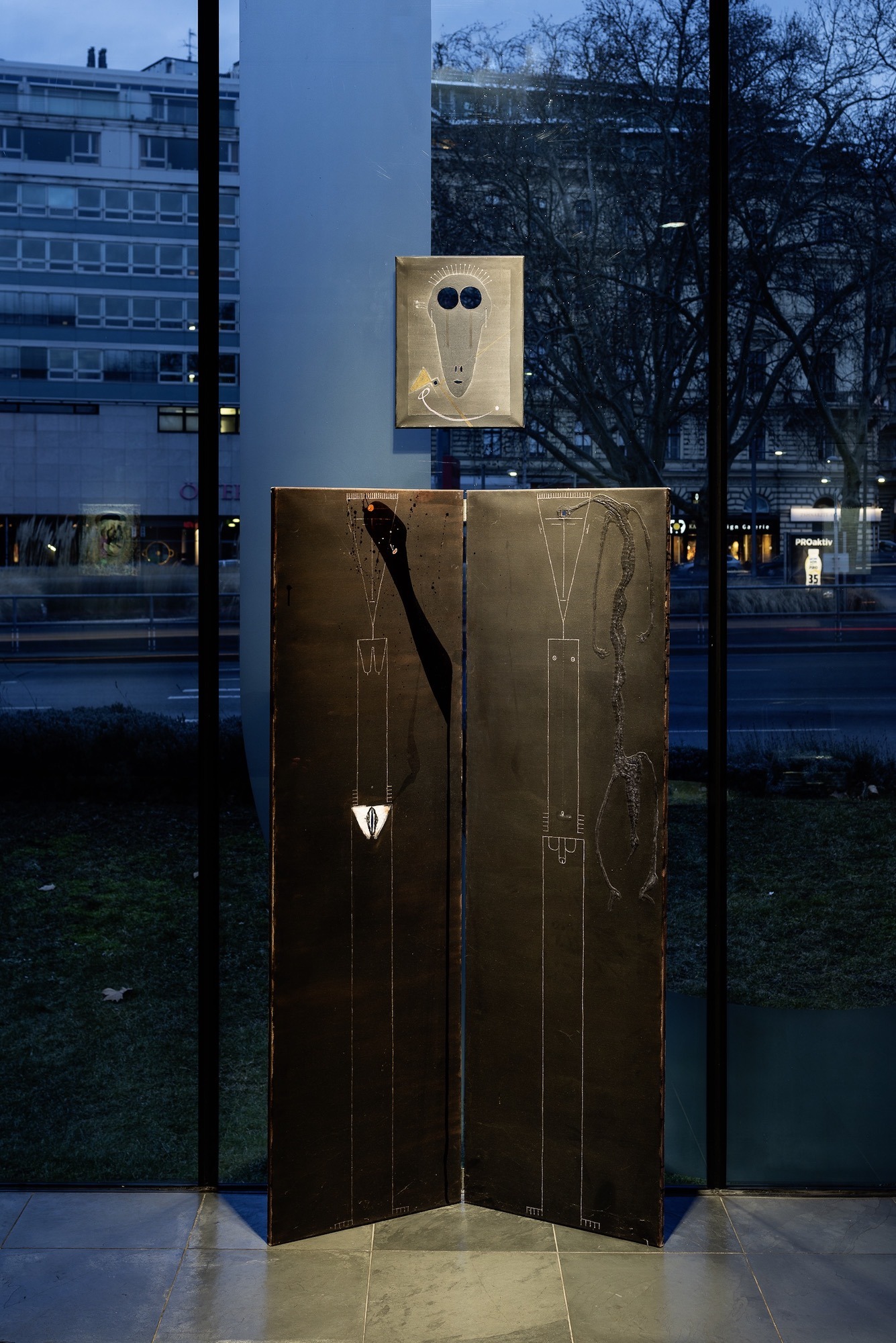 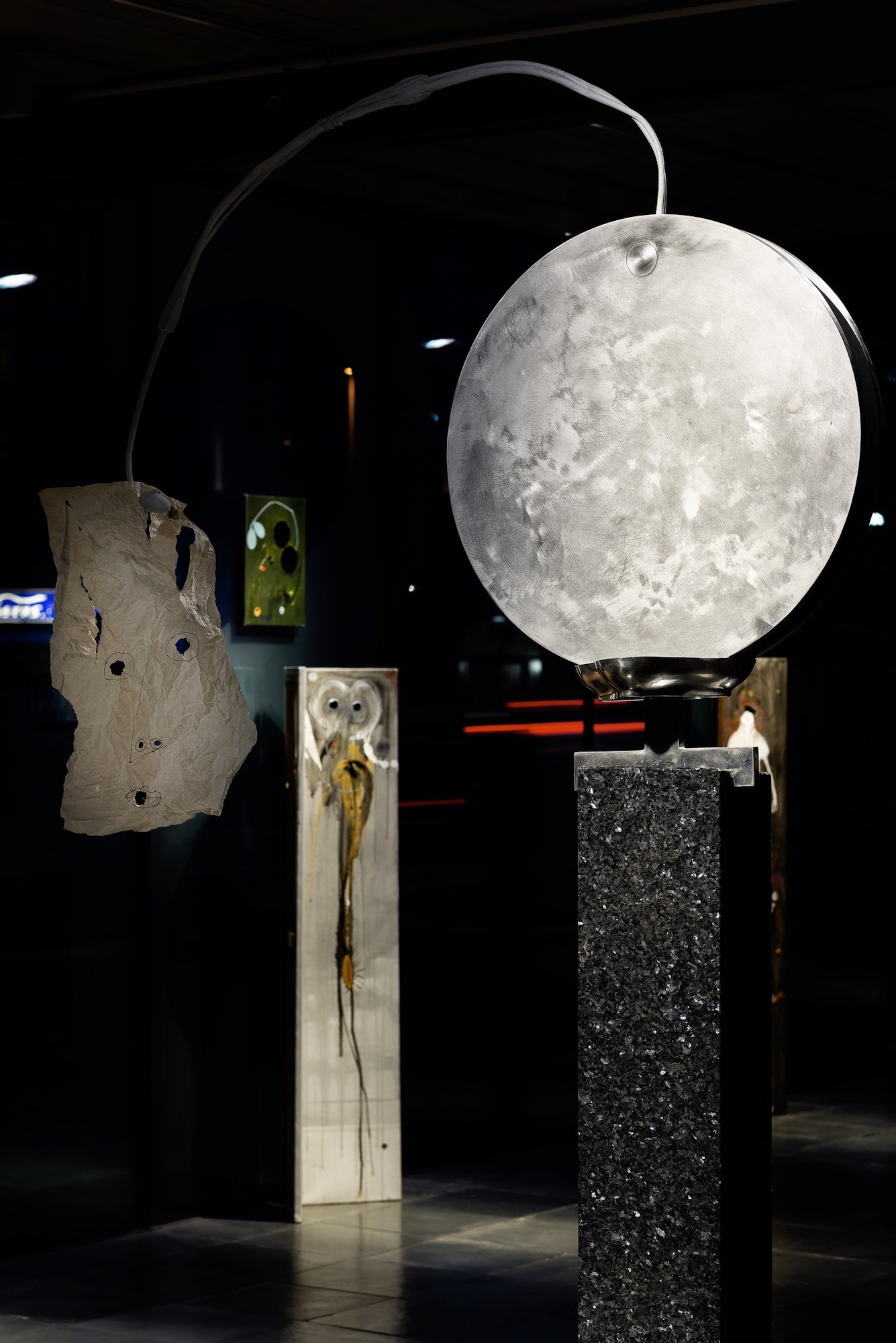 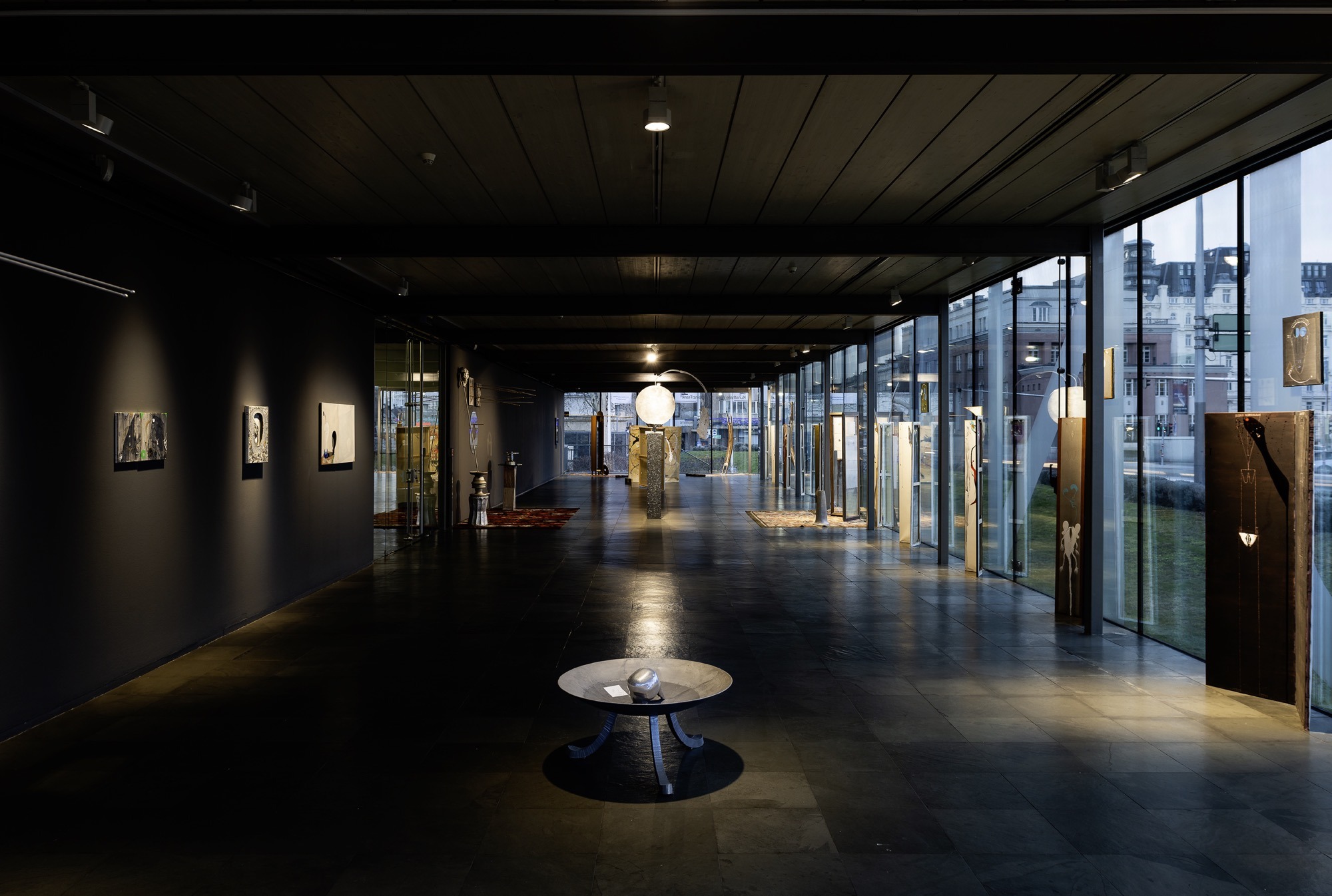 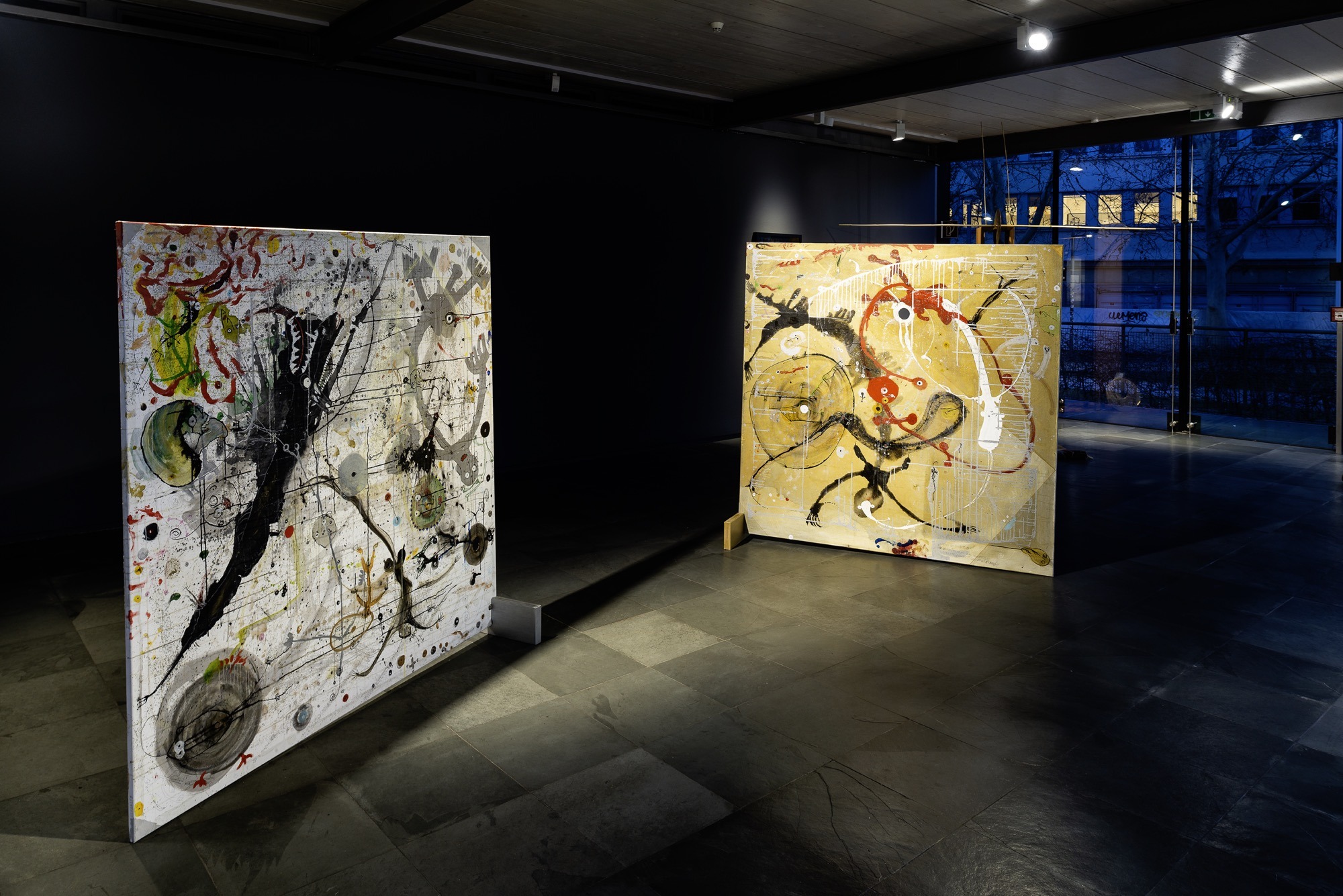 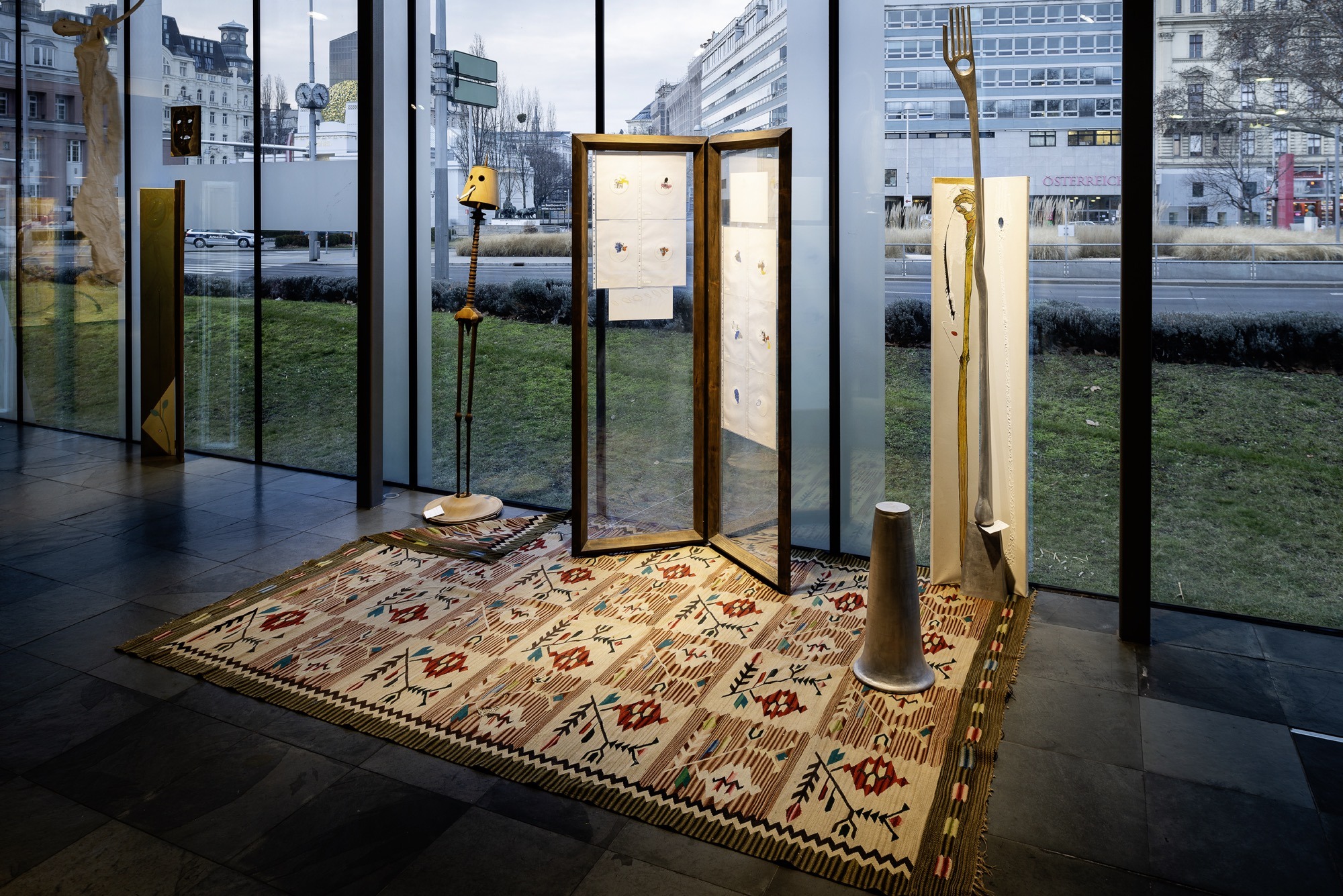 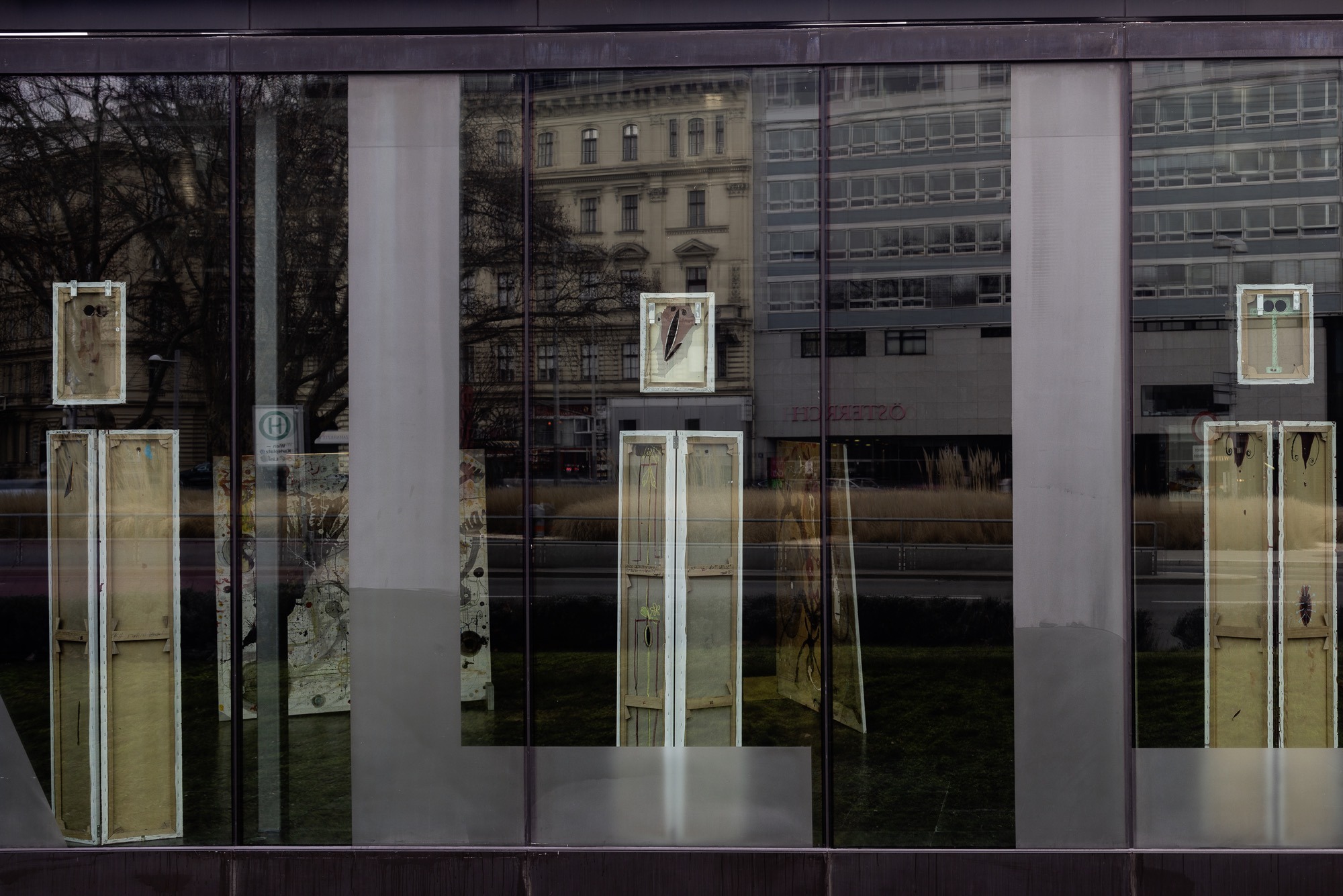 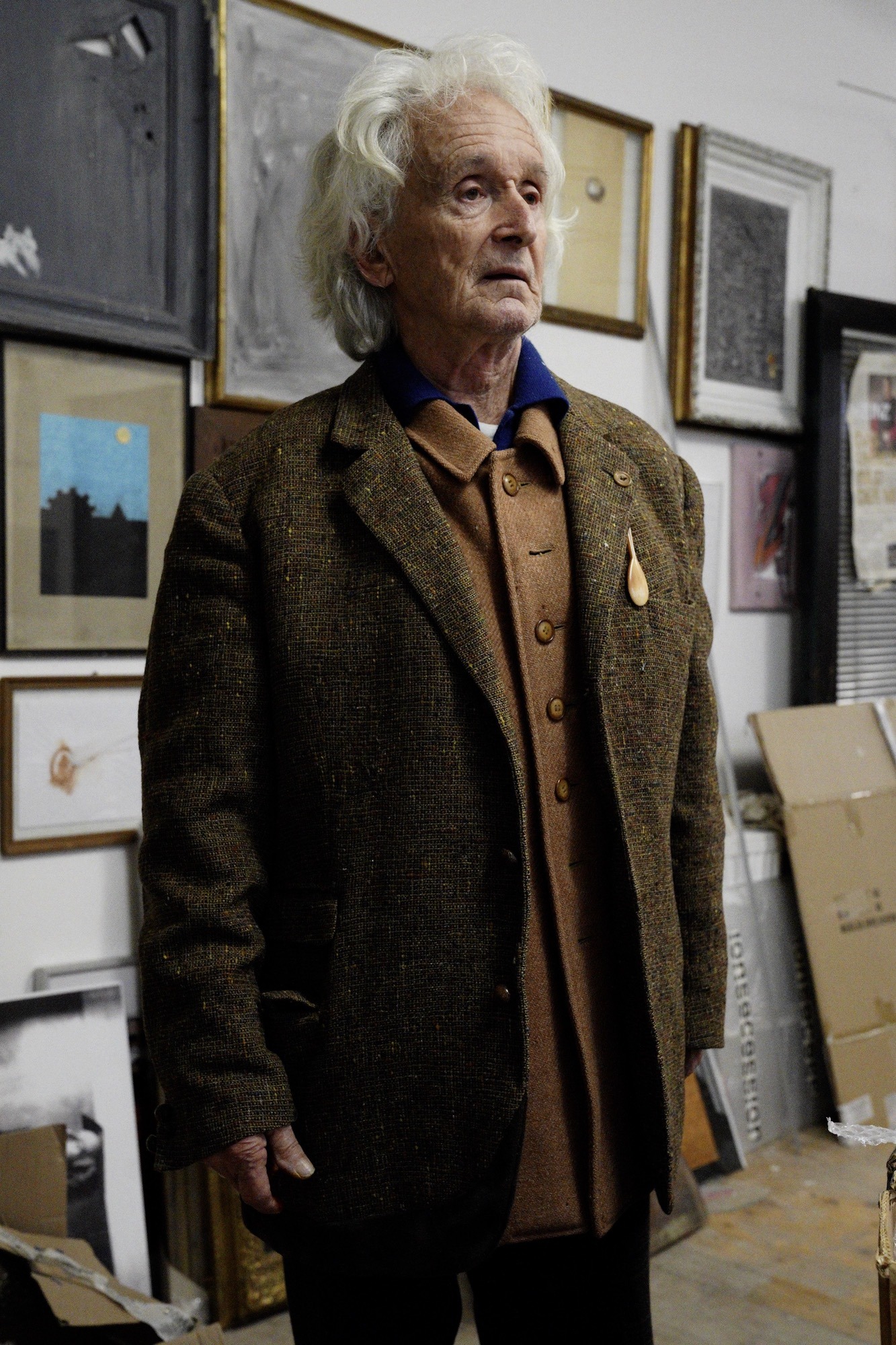 Trained as an electrical engineer and architect, Heinz Frank has been working hands-on as a sculptor, draftsman, painter, and creator of linguistic and object art, as well as occasionally, designer of interiors and furniture since the 1970s. Aphoristic notes such as “The hole is the epitome of emptiness” provide the initial sparks for a creative process resulting in pictures and constructions that not only blur boundaries between genres, techniques, and materials. More generally, the artist suspends norms and conventions—or to be more precise, he strips them of their power as agents of the disconnect between reason and emotion. That is why one of Frank’s guiding mottos is “Thinking what one feels and feeling what one thinks.” Enlivened by a dash of irony and with what appears to be playful ease, his formal-visual, intellectual, and material balancing acts, which often take inspiration from diverse cultural strands, recombine what society and tradition would keep strictly separate in manifold variations. Frank’s background in architecture is evident throughout: the measure of all things, of their proportions and relation to the space around them, remains the human being—and the artist himself.

„My practice resides in the in-between space between the void inside and the void outside“: so says Heinz Frank, who, after studying architecture with Ernst A. Plischke in the 1960s, has worked as a sculptor, draftsman, painter, creator of linguistic and object art, and, occasionally, designer of interiors and furniture. An expert in multiple media, he also likes to interlace them, just as he freely mixes and matches materials: wood, stone, plaster, paint, clay, glass, metal, and found fabrics, wires, boxes, trestles, mirrors, or parts of old household effects and equipment.

Combining, assembling, and transforming these and other objects and devices, Frank probes the tensions between polar opposites such as hard and soft, cold and hot, inside and outside, heavy and light, beginning and end, pinpointing in forever novel creations how—and that—these terms are all interconnected. To use a paradoxical formula in which the artist once summed up his objective: “Transforming the unformed into the formless.”

It is always the word that is in the beginning of his creative process—or, more specifically, an aphoristic conceit, written by hand on a piece of paper, that now accompanies the work whose genesis it sparked. “The hole is the epitome of emptiness,” “Of the long-nosed monkey me,” or “The posterior and the anterior of the others” ... we read next to and with his pictures and sculptures. The fourwheeled floor piece “By thereby,” meanwhile, travels along its circular orbit, revolving, potentially forever, around itself. Another anthropomorphic sculpture, for its part, has “No back of the head, for the vertex toward the funnel was born to think.”

Frank’s polymorphous conjunctions of linguistic and visual art—the exhibition gathers works dating from different periods (since 1970)—transport the beholder into a world of ideas in which human existence, the origin and trajectory of thoughts, the body, and the inner life are central themes. What the cogwheels of everyday life, where rationalism and economic considerations reign supreme, keep neatly separate is here undivided: reason and emotion. Heinz Frank teaches us that both are interdependent and therefore equipollent: what makes the human being human is the thought that is felt and vice versa. Hence one of his mottos: “Thinking what one feels and feeling what one thinks.” The artist takes advantage of the glass curtain walls at the Kunsthalle Wien Karlsplatz exhibition space to hang doublesided painted pictures on the insides of the panes. Unframed glass is neither window nor hole, but pictures mounted on glass walls can become windows, especially when, as in Frank, they have holes. Eye-holes, usually, through which one can in this instance catch glimpses not only of the emptiness inside a head but of the exterior or interior space behind them. To put it, again, in Frank’s words (perhaps): “Wall-internal imbodies wall-external.” Or (perhaps) also: “Humans are the blurred windows on the outside.”

The gallery also features rectangular corners, in which four sculptures are set on rugs. A series of painted folding-screens, by contrast, has taken up position in the middle of the room, standing as tall as Heinz Frank—angled movable walls, though they may not shield against anything but themselves. Yet they, too, each sport at least one hole, that “epitome of emptiness,” though then again one should note: “The hole, thinking’s sixth finger.” The exhibition at Kunsthalle Wien Karlsplatz reveals Heinz Frank as not only a deft performer of poetically nested conceits and sallies, but also as an architect—who is at home at the drafting table: the measure of his things, of their proportions and relations to the space around them, is always the human being—and, therefore, the artist himself as an embodied I.

Heinz Frank (b. Vienna, 1939) studied architecture with E. A. Plischke at the Academy of Fine Arts Vienna from 1965 until 1969. Since 1971, he has shown his work in numerous solo and group exhibitions at art institutions and galleries in Austria, Germany, Belgium, Turkey, Ukraine, and Switzerland.