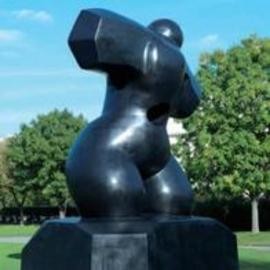 The American artist Paul McCarthy’s work Henry Moore Bound to Fail presented by KÖR on public space karlsplatz relates to Henry Moore not only formally, but also topographically: it is positioned in a place that guarantees visual contact with the British sculptor’s Hill Arches in front of St. Charles’s Church.

Paul McCarthy’s bronze holds a special position within the artist’s oeuvre in terms of design and material. McCarthy quite often develops his motifs over long periods of time; this sculpture’s origin is a miniature figure from 1960/61 which did not explicitly relate to Henry Moore at that time. Only when the artist took up the form again in 2003/2004, he emphasized the similarities to the Englishman’s sculptures and included his name in the title of the work. The smooth surface with its soft appearance and the abstract and yet torso-like form rotating around its own axis actually suggest an appropriation of Henry Moore’s aesthetic along the lines of the 1960s’ art of the same name. Thus, the sculpture falls into line with the rest of McCarthy’s work in which the ironic and subversive reinterpretation of established art styles’ extant materials have always featured prominently.

Paul McCarthy, born in Salt Lake City, Utah in 1945, lives and works in Los Angeles and ranks among today’s most influential artists. His oeuvre encompasses drawings, sculptures, actions and performances, videos, photographs, and installations. His works are mostly characterized by tongue-in-cheek references and sexual provocation and follow in the tradition of Viennese Actionism, Surrealism, Happening, and Fluxus.