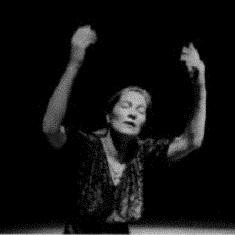 Hans Jürgen Syberberg still numbers among the most controversial German (film) artists today. Rejected by German critics for a long time, his work has found such renowned advocates as the American art theorist and writer Susan Sontag, the French philosopher and author Michel Foucault, or the American film director Francis Ford Coppola. Though the list of his films comprises more than twenty works, his late has remained largely unknown especially to a younger public. The question why an institution such as the Kunsthalle should present the work of a filmmaker has long become obsolete – and is clearly baseless in the case of Hans Jürgen Syberberg. With his penchant for a “transdisciplinary art,” Syberberg has not only left behind the anything but clear dividing lines between the various genres of art but also created spaces of perception that evade both formal categorization and traditional narration. Time and space are sublated, and the viewer is confronted with a shimmering kaleidoscope of associative fragments from “the Occident’s cultural history.” His installations for the “documenta 7” (1982) and the “documenta X” (1997), as well as the comprehensive retrospective in the Centre Pompidou (2003), suffice to reveal the degree to which Syberberg’s definition of film as an installation and his visual language and understanding unfold an important level of reflection not only for the film and the theater but also for contemporary art.
Syberberg’s subjects ranging from the Late Romantic movement and Richard Wagner’s universe to the Third Reich have long attracted the interest of a young generation of artists such as Jonathan Meese and Christoph Schlingensief. His successful cross-fertilization of film, theater, and contemporary art not only reminds us of Schlingensief’s approach but has also become evident in works like James Coleman’s impressive filmic installation “Retake of Evidence” presented at the “documenta 12,” for example.
Besides a comprehensive presentation of his films, the exhibition at the Kunsthalle Wien centers on the artist’s late work. Edith Clever’s outstanding qualities and versatility as an actress in the two films Die Nacht (1984) and Ein Traum, was sonst? (1994) constitute the core of Syberberg’s filmic installation. Both Die Nacht and Ein Traum reveal that Syberberg’s works are “filmed performances,” as Boris Groys shows in his contribution to the catalogue – a synthesis of space, individual, text, and image taking place within an artistic installation. The museum context allows what theater and cinema cannot fulfill. The space turns into a walk-in film in which the viewer experiences Edith Clever’s monologue as a conversation with himself.
“The gesamtkunstwerk I formerly strove for,” says Syberberg, “now [with Edith Clever] became a theater of the world within one person [...] where film and theater came together for me. The film on the stage, and the theater in the film.”

Hans Jürgen Syberberg and Edith Clever are bound by a twelve-year collaboration which began with the filmic interpretation of Wagner’s Parsifal. Syberberg intensely dedicated himself to Richard Wagner for quite some time, which manifested itself in Ludwig and Hitler, the documentation on Winifred Wagner, and, finally, in the monologue Die Nacht.
Die Nacht – a gigantic dramatic monologue in four parts like Wagner’s Ring – was produced as a film after first performances at the Theâtre des Amandiers in Paris in autumn 1984. Throughout six hours, Edith Clever plays poems, prose texts, letters, speeches, and dramatic roles invoking grief and farewell, doom and the nearness of death. The montage of poetic subject matter spans from Goethe and Kleist, Platon and Hölderlin, Novalis and Jean Paul to the Indian chief Seattle’s speech and texts by Hans Jürgen Syberberg.
Die Nacht and the monologue Ein Traum, was sonst?, realized ten years after, are mainly characterized by unequivocal biographical references and visual memories. While stories about the artist’s childhood in Nossendorf dominate the fourth part of Die Nacht, the work Ein Traum, was sonst? provides “an end of the world account” from the flight after World War II to the situation encountered after the fall of the Wall in 1989.
Hans Jürgen Syberberg was born in Nossendorf, Pomerania, in 1935 – since 2002, he has been living in the place he was forced to leave in 1947. A look into his online diary, which describes every day in word and picture since 2001, elucidates how Syberberg’s films, like biographical inscriptions, retrace his way step by step and provide indispensable illustrative material and material for comparison for his entire Nossendorf project today.

Syberbergs has been working on his Film nach dem Film day after day. In her essay on Syberberg, Susan Sontag remarked: „As the film is ending, Syberberg wants to produce yet another ravishing image. Even when the film is finally over, he still wants to say more and adds postscripts.”

The exhibition Syberberg / Clever. Die Nacht. Ein Monolog was conceived together with Hans Jürgen Syberberg and is presented in cooperation with the Ursula Blickle Foundation. In Vienna, Syberberg extends his installation of Clever’s monologues Die Nacht and Ein Traum, was sonst? by including the filmic fragments on Einar Schleef and Oskar Werner, which have been hardly shown to this day. The artist will accompany the retrospective of all his films with daily comments on the exhibition on his homepage. The Ursula Blickle Foundation for its part focuses on Wagner as a center of Hans Jürgen Syberberg’s work in its projection installation of four films.