video of the month #67: Spectrum 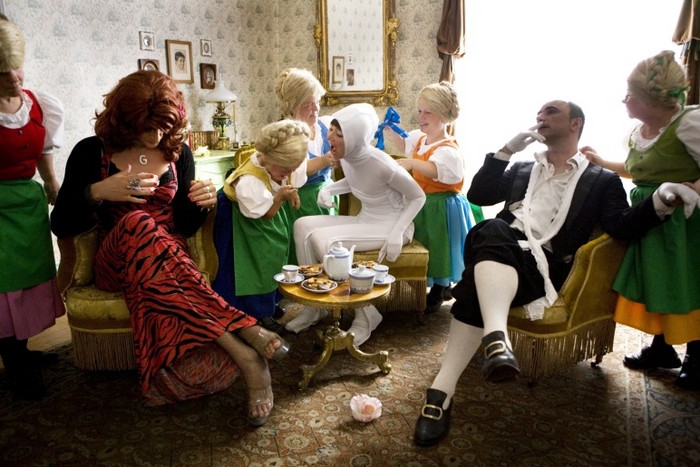 Spectrum. From the Zachęta Video Collection - kuratiert von Anna Tomczak
The compilation of videos presented in the ursula blickle videolounge is a selection of works from the Zachęta video collection. The thematic screenings of videos form a kind of spectrum; in other words, a specifically organized selection of phenomena and concepts analyzed by the authors of the films. Outstanding artists of the young and middle generation created this presentation of the newest video art in Poland. The screenings that comprise the project Spectrum have been divided into the following thematic blocks: sound, gender, social portrait and roles. The technical conditions of the place of presentation partially shaped the selection – the videos are one-channel projections, whose theme and aesthetics made them appropriate to be shown in the proposed form. These works were also chosen as an attempt to emphasize the range of themes engaged in by Polish video artists. It shows both a cross-section and the spectrum of problems relevant today in Polish art. This should not be treated as a full picture, but rather as an overview of Polish video art of the last two decades. The artists use a variety of film techniques – from animation to the aesthetics of documentaries, films or television (for example, reality shows). Through the medium of the camera, they record the signs of the times in which they work.

02.05.11 - 15.05.11: SOUND
Sound, music and silence – we hear them around ourselves, our daily lives are played out in an audio-sphere determined by our own physiological make-up and also the environment in which we live and evolve. Only disturbance or a change focuses our attention on the specificity of this sphere. Althamer invites a choir of professional singers to jointly create an untypical audio background in the labyrinths of the Moscow metro. Music helps the characters of Katarzyna Kozyra’s fairy-tale Summertale communicate with one another and music finally frees the unusual location of the film’s action as well as its heroes from the spell cast over them. In contrast, Anna Niesterowicz’s HH surprises the viewer with its total silence – by depriving the film of a soundtrack, the viewer must concentrate on the gestures of the dancing girls. Karol Radziszewski, in the work Praise the Flowery Meadows, creates a duet: he records his singing, mixing it with songs sung by his grandmother. Artur Żmijewski then records very different sounds with a deaf choir.

16.05.11 - 29.05.11: GENDER
The issue of gender, as a set of features that are as much cultural as physiological and as a defining instance in deciding a person’s social functions, has become an object of artistic works. Anna Baumgart, for example, returns to the former stereotypical depiction of women: hysteria and ecstasy. Her work relates to the problem of the auto-aggressive behavior of women that in the contemporary world has become a signal of psychological problems; despair, expressed in the language of the body – while still remaining a taboo subject. Aldona is the portrait of a transsexual who tells of his/her life. Aldona’s day also reveals the story of her transformation from a man into a housewife, caring for her partner, her appearance and the home. In the pop video Cheerleader, Katarzyna Kozyra comments on femininity as created by American stereotypes. Julia Wójcik, in her turn, during a performance recorded in Zachęta’s Mały Salon, refers to the feminist manifesto-actions of the 1970s. The character HalfAWoman created by Jacek Malinowski is a woman suffering from PDS (Pelvic Degeneration Syndrome), as a result of which she has lost half her body. The use of documentary conventions means that the viewer believes in this story without reservation. Illness has made it impossible for the hero to participate in a society, although she herself has no desire for this to be the case.

30.05.11 - 12.06.11: ROLES
Taking on the role of a different character is not something that, in the works presented, should be understood as remaining on the level of an actor “playing” a director’s instructions. Instead, it results from studio work and emotional experiences. In Marta Deskur’s work, children turn into wild animals: they bark at the viewer, take up threatening poses and strive for the associations provoked by the given animals. Paweł Kruk, in preparing for his work Larger Than Life, watched many interviews with Michael Jordan into order to play this figure more fully: the text spoken by the artist are fragments of authentic interviews by the sportsman, with care taken to repeat every gesture, mimic or pause of the recited phrase as closely as possible. The master of mystification, Robert Kuśmirowski, takes on the role of a cyclist who cycles a given distance on a motionless bike. Artur Żmijewski in Repetition refers to the famous Zimbardo experiment. Through this, he demonstrates how human conduct is conditioned by particular social functions and the behavioral clichés attributed to them. Joanna Rajkowska, in collaboration with the Freedom Theatre, records actors workshops. The participants are given the task of expressing the emotions linked to the tense political situation in Jenin and the participants’ social roles.

13.06.11 - 30.06.11: SOCIAL PORTRAIT
From details to a general view – thus, you could describe the strategies used by artists creating social portraits. AZORRO’s Family is a staged and over-exaggerated discussion between the members of a fictional family. A lazy afternoon drifts by with them discussing contemporary art and its classic artists. Unnatural dialogues on the theme of classic works of contemporary art reveal the artifice of the family relations. Bąkowski’s Spoken Movie is an anonymous portrait of a person and his frustrations. The artist’s poetry uses specific language to express the thoughts of a participant in a gray and repetitive daily life. Alicja Karska’s Space design and organisation, however, is a portrait of a place – the artist returns to the ruins of a hotel; through a rhythmic choreography, she recreates the routines of service: the uniforms, repetitive movements and continually the same retrodden paths. In a similar way, Julita Wójcik’s film Idyll concentrates the viewer’s attention on a place. The work presents the artist lying on the grass in the sun against an industrial background with the smoking chimneys of factories creating a worrying scar on the overall view. The artistic group WUNDERTEAM, in their turn, portrays the homeless guard of the Magdalena Abakanowicz statue at the Citadel in Poznań. The comments of the film’s hero create an image of the people who view art in public space and lead to a wider reflection concerning the status of a work of art in today’s society.

Zachęta is an institution whose roots date back to the mid 19th century (as the Zachęta Fine Arts’ Society) and whose mission, both then and now, is promoting contemporary art, albeit understood rather differently in different epochs. Zachęta possesses a collection of contemporary art, whose particular character has been formed because of the historical changes in Poland that the gallery has both witnessed and participated in. After the World War II, the National Museum received the enormous collections of Polish art gathered by the Zachęta Society of the Fine Arts during the 19th century. The Zachęta Society was also replaced by the Central Bureau of Artistic Exhibitions, an institution designed to realize the state’s cultural politics through the purchase of artworks (during real socialism, the state, as the only patron, purchased works from artists on a broad scale). This collection, uneven from an artistic perspective but fascinating from a political one, has been systematized and transformed into a genuine collection by the Zachęta team only after the 1990s. After the change of system in 1989, the Ministry of Culture supported Zachęta’s transformation into a national gallery with an autonomous program and the potential to independently purchase works for the collection.

The video collection was begun at the end of the 1990s. Zachęta has co-produced some of the newest videos added to the collection. Some were made for exhibitions and projects organized by the gallery in Poland and overseas (such as the Venice Biennale).
www.kunsthallewien.at