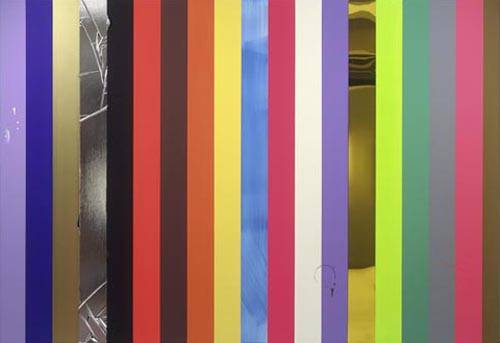 The works by German artist Anselm Reyle have in the last four years, especially within in the context of re-examining modernism, been assimilated by a wide range of younger artists. With the exhibition ARS NOVA in the Kunsthalle Zurich, the artist presents himself for the first time in a one-man Swiss show. He has immersed the visitors in a room painting of neon colours, confronted them with large-scale abstract paintings that also tie his works into an art-historical and Swiss context by his allusion to canvases by Ferdinand Hodler (Sunset on Lake Geneva, 1915) or Fernand Léger (Les deux figures nues sur fond rouge, 1923, in the Kunstmuseum Basel). Other art-historical kicks-offs can be found in the abstract-fractal works by the painter Otto Freundlich, but also in the African sculpture that is repeatedly associated with modernism, whose presence Reyle allows in the form of a chrome-plated version of a flea-market carved sculpture enlarged to giant-size and the floor sculpture that dazzles by its use of all mediums and colors made from a heap of found neon tubes. Reyle has composed an ambivalent field, which has taken on the form of an overwrought, perverted exhibition of modern art, perhaps capable for this very reason of being constructive for the autonomy of the objects.
ARS NOVA, the strange and inappropriately highbrow sounding title that points to another interpretation and production time and that Anselm Reyle chose for his exhibition at the Kunsthalle Zurich and its accompanying publication, was originally the name in the Middle Ages for a new theory of music. In the meantime it is used for countless music labels, orchestra associations, rather doubtful artists groups, for computer software, a furniture collection and precisely for an artist’s paint brand that Anselm Reyle uses for his works. ‘New Art’ as the title of a contemporary exhibition, of a contemporary art catalogue, of a contemporary artist is something that disorients our perceptual intake just about as much as a first encounter with the works of Anselm Reyle itself.
Anselm Reyle’s paintings, material pictures, sculptures and ready-made objects out of everyday articles (again and again lamps and vases, but also articles from a non-domestic environment) and his installations composed from all these work elements remind the viewer at first of the whole art-historical repertoire for inventing abstract images: of the seductive machinery of the Pop and art print culture (see Vasarely), just as much as of the good taste of modernism that has been domesticated into an everyday design that, now together with clever lighting solutions, is extolled in magazines for interior decoration.
Silver foil, neon colours, mirrors, a chrome finish, neon tubes – Anselm Reyle’s works entangle the viewer in their surface and immerse him in an ambience of colour and light. For which Reyle produces stripe paintings, which quote the TV test picture as much as American Expressionism. He playfully skips through the art-historical pictorial versions of the monochrome, that of the drip-and-pour paintings formulated by chance, as much as Pop fusions of high and lowbrow and the diverse typologies of sculpture. And naturally he does this in every format: handy dimensions for domestic consumption all the way to the oversized for the art or public context. All of which, in addition, is ‘fabricated’ in the seemingly dated context of an artist’s studio peopled by assistants. A practice that recalls the workshops of an historical type of artist, the serialism of Minimal Art, as well as the self-important airs of painting in the 1980s and the industrialised art production of the 1990s. In view of the works by Anselm Reyle and all his epoch-contradicting insignias we can hardly resist the disagreeable fascination that occurs because the discrediting of abstract art has so taken hold of our perception as much as has a general exhaustion withpostmodern quotations which, exactly because of an intensified ambivalence, can now become productive for a present-day concept.