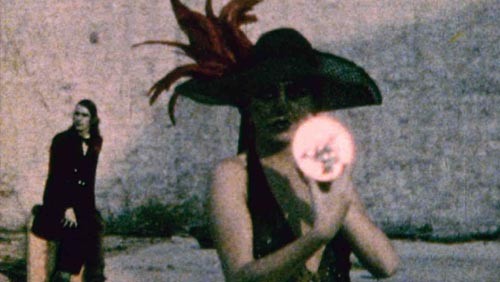 The new exhibition in the Kunsthalle Zürich “Derek Jarman. Brutal Beauty” is dedicated to the British artist and filmmaker Derek Jarman (1942 – 1994). The exhibition is curated by Isaac Julien who worked with Jarman for many years.

While “Derek Jarman. Brutal Beauty” aims to present a representative overview of Jarman’s creative output, it is not conceived as a classical retrospective. Instead, Julien is more concerned with making it possible to experience Jarman’s interdisciplinary approach and with refocusing critical attention on the work itself.

Derek Jarman was one of the outstanding representatives of British Independent Cinema of the period 1970 – 1990. However, although he was known to a large audience mainly as a filmmaker, he saw himself as an artist, in whose interdisciplinary and highly autobiographical oeuvre film, painting, stage design and writing assumed equal prominence. In his tireless struggle for gay rights and AIDS education and awareness, Jarman’s main priority was “to unite Art with Life and vice versa” (Isaac Julien).

The exhibition opens with a selection of paintings from the 1980s and 1990s. The double projection, which was developed for the Kunsthalle Zürich and provides the basic material for Isaac Julien’s documentary film Derek (2008), offers an introduction to the work and life of Derek Jarman. It is based on an interview with Jarman recorded by writer and producer Colin McCabe in 1990. The voiceover is narrated by the actor Tilda Swinton, who appeared in many of Jarman’s films including Caravaggio (1986), The Last of England (1988) and Edward II (1991). Tilda Swinton reads excerpts from a letter she wrote to Jarman after his death. In Derek, the interview, narrative and excerpts from Jarman’s feature films and super 8 films are interwoven with relevant contemporary news footage and media material focusing on the political events of the time to form a coherent and impressive work; in this way the film conveys an overview of Jarman’s biography from the perspective of his imminent death. At the same time, insight is gained into the England of the period 1960 – 1990 through the documentation of socially volatile topics such as the punk movement, the protests by intellectuals against the government of Margaret Thatcher, the struggle for gay rights and the AIDS crisis.

The installation is juxtaposed with a still life image by Isaac Julien which were taken inside Jarman’s house in Dungeness.

The exhibition ends with Jarman’s film Blue (1993), a moving and harrowing work by an artist who was about to go blind. In this his last film, the screen remains blue for the entire duration of the work – an homage to the French painter Yves Klein, whose Blue symbolised serenity and contemplation for Jarman. The soundtrack of the film is a text written and spoken by Jarman, in which he artistically explores and reproduces life and his experience with AIDS.

Between these two central works, Isaac Julien presents a selection of rarely shown films from the super 8 archive of Jarman’s artistic estate, e.g. Imagining October (1984) and In the Shadow of the Sun (1980). Having studied painting and stage design at the Slade School of Art in London, Jarman started working with super 8 as far back as the early 1970s and experimented with this medium up to the early 1980s. Jarman, who saw himself primarily as a painter throughout his life, achieves a painterly feel in the way in which he deals with light, colour, composition, abstraction, alienation and staging.

The work It Happened by Chance Redux (2008) is a ten-screen projection composed of footage which Jarman found on the floor of his editing suite. The installation is a re-working of It Happened by Chance (around 1976). The former was curated jointly by Isaac Julien and James Mackay, the owner of the archive, and incorporates Jarman’s most important super 8 films. The sculptural arrangement of the screens in the space is intended to evoke formally the Petersburg hanging of the Black Paintings, which were exhibited in the Richard Salmon Gallery in London in the late 1980s.

“Derek Jarman. Brutal Beauty” is an exhibition of the Serpentine Gallery, London staged in cooperation with Kunsthalle Zürich and Kunsthalle Wien.
www.kunsthallezurich.ch