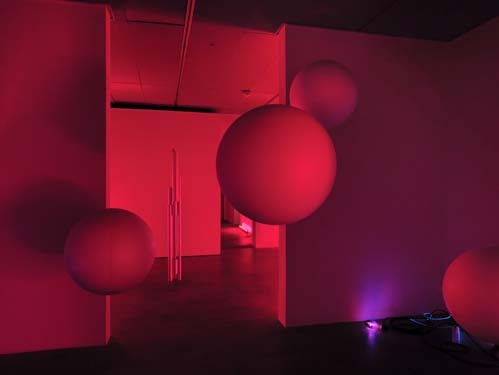 The Kunsthalle Zürich launches its exhibition season at the Museum Bärengasse – where it is based temporarily until June 2012 while work is carried out on the conversion and renovation of its permanent home at the Löwenbräu Areal – with the solo exhibition «ohne Titel (in Red)» by Heimo Zobernig (born in Mauthen, Carinthia, Austria in 1958; lives and works in Vienna). This exhibition presents an artist who, based on a body of work produced since the 1980s, is viewed as a key figure on the Austrian art scene. Zobernig’s exhibition provides insight into an oeuvre that explores themes of minimalism, the historical loading of the opposing pair of “figurativeness vs. abstraction” and the problem as to what art is or can be, its outward form and function. In keeping with the rooms in the buildings of the Museum Bärengasse, which were constructed in 1670, the works selected for presentation – the exhibition includes 11 video works, cardboard and particle board objects created since 1985 – focus on the topics of “furnishing” and “light” and play with the domesticated interior of the former residential buildings. Zobernig develops a specific lighting situation for the rooms of the Museum Bärengasse: he closes the shutters on the windows of the two early-Baroque houses and submerges the exhibition space in red by means of a light installation.

In the Lexikon der Kunst 1992 compiled by Heimo Zobernig and Ferdinand Schmatz, the term “innovation” features under the letter “I”. Schmatz refers to this again later and describes it as follows in reference to Zobernig’s work: “Innovation: H.Z’s work is not dominated by the compulsion for the new; instead the question as to what became a compulsion in art and how it is investigated.” Be it as a painter, stage designer, draughtsman, sculptor, architect, designer, catalogue and book designer, poet or author of theoretical works, Zobernig pursues this question in the widest possible variety of roles and thereby questions the traditional image of the artist. The areas in which Zobernig works are as varied as his roles and are always aimed at exploring formal and substantive potential: his work is located on the interface between sculpture, space, architecture and design.

Zobernig has been sounding out the possibilities of sculptural work since the early 1980s. His sculptures – geometric wall objects, façade-like reliefs, objects and sculptures created from abstract stereometric bodies which take the form of cubes, angles, columns, pedestals, podiums, movable walls and shelving – are made of cheap no-frills materials such as particle board, cardboard, linen, molton, Styrofoam, synthetic resin, emulsion paint, fluorescent tubes and other everyday building materials. The seeming banality and everyday nature of these materials is reinforced in the reduced functional appearance and standardised aesthetic of the objects they are used to create. The objects alternate between minimalist sculpture and functional objects, between works of art and everyday objects in the literal sense, between the attribution of meaning and function. Hence, the works ohne Titel (1995), which consists of a coffee table constructed out of three pieces of particle board and covered with coloured light bulbs, ohne Titel (1999), a bar-like sculpture and ohne Titel (2006), a shelving unit that is very reminiscent of a shelving unit with a man’s name produced by a Swedish furniture manufacturer, exemplarily complete the paradigm change from applied to visual art. The artist consistently titles his works ohne Titel (“untitled”) and triggers associative thought processes in the viewer, in which the formal reality, the visibility of the reality and the associated meaning are questioned within the museum context. Zobernig’s spare unadorned formal language is reminiscent of positions in minimal art – a particle board sculpture prompts unavoidable associations with Donald Judd, Sol LeWitt and Robert Morris – however, through conscious deviations, the artist breaks with the canon, the fetishism for fine materials, and offers ironic revision instead.

This strategy of reduction is also pursued by the artist in his video works: their presentation on black monitor boxes placed on white tables also lends a sculptural character to this medium. On a formal level the videos are characterized by static camera positions, the frequent equation of playing time and time played and the imperfect application of the chroma key technique, a video processing technique from television in which a monochrome background can be substituted by a background in a different colour (e.g. Blue Box). In terms of content, the video works are characterised by simple dramatic compositions, one-dimensional action strands and rudimentary costumes. The almost dilettantish appearance of the videos – which have been titled almost exclusively with sequential numbers since 1989 – irritates the viewer’s conventional viewing expectations. By frequently featuring himself as the protagonist, Zobernig thematicises the practice of performance and with it the ever-present possibility of the embarrassing exposure of the self. In Nr. 2 (1989), the artist totters across a meadow wearing a long blonde wig to a computer-generated soundtrack; the video Hans Weigand/Heimo Zobernig (1992) shows both artists bent over, bottom to bottom, alternatively attempting to get a chainsaw to work; Nr. 9 (1995) presents a view into an dark toilet, from which the artist calls for help for 30 minutes; and Nr. 12 (1996) shows him naked presenting a gymnastic choreography in the middle of projected views of Chicago. Through this use of his body, the artist refers not least to the pioneers of video art, for example Bruce Nauman and Vito Acconci, and hence also thematicises the artist subject. At the same time, he also refers to early video production and the possibilities it offered for the manipulation of images, for example in his graphically reduced video works Nr. 21 (2003), in which the eight colour bars of the RGB colour chart are mounted in a wild confusion of colours and tones, and Nr. 11 (1995), in which the formal concept of Zobernig’s inkblot images was fed into a computer which generates constantly changing abstract images from these images.

Following solo shows in the Kunsthalle Bern in 1997, the Kunsthalle Basel in 2003 and participation in group exhibitions inter alia in the Museum für Gegenwartskunst in Basel in 1999, Heimo Zobernig presents his work here once again in an institutional context in Switzerland. The artist, who was represented at documenta 9 (1992) and documenta 10, was the first Austrian artist to be honoured with the Frederick Kiesler Prize for Architecture and the Arts in 2010.
www.kunsthallezurich.ch