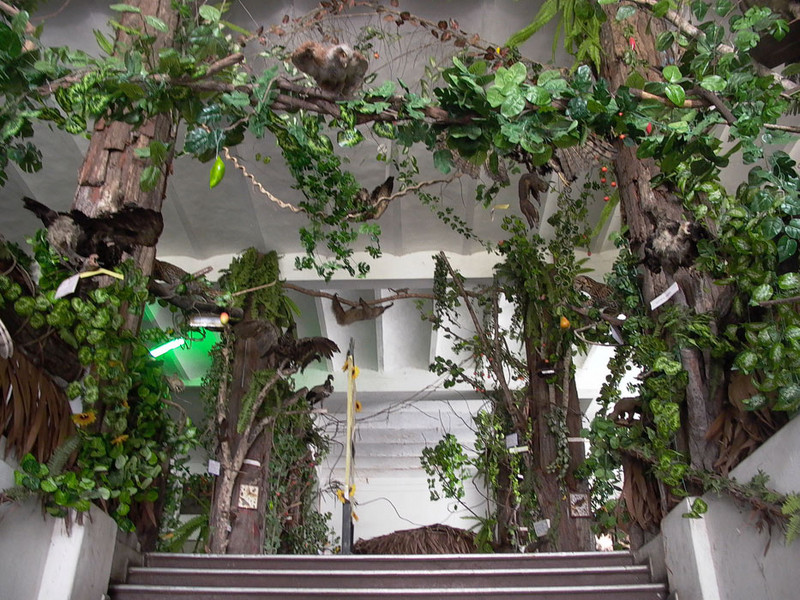 Freely inspired by Honoré de Balzac’s imaginary journey from Paris to Java (Voyage de Paris à Java, 1832), «MICROCLIMA ZURICH TROPICAL» presents real and imagined journeys into the tropics and other jungles. MICROCLIMA proposes an immersion into a different microclimate, and with it shifting points of references giving visibility to narratives produced in other climates and geographies.

BIBLIOTECA AMAZONICA is inspired by Mantilla and Chaves’ research into the amazonic libraries of Iquitos in Peru (“In the jungle there is a city, in this city there is a library, and in that library is the jungle”) and in Dominique Gonzalez-Foerster’s investigation on the future of books (“Is it possible to expand this library, and if so, how can it be done in a completely different way?”) and the relationship between text, space and climate as explored in her exhibition «Chronotopes and Dioramas» at Dia Art Foundation/Hispanic Society of America in 2010.

CINE CLUB DE LOS TROPICOS is a changing program of artists’ films, which – although having no direct relationship to Balzac – explore realistic narratives, present panoramic portraits of different aspects of society, and share the Balzacian ambition of creating fictions (and realities) as big as life. Artist films in the program include amongst others: Gilda Mantilla and Raimond Chaves, An Uncomfortable Eagerness (2011) about their research done in the Amazonian Libraries of Iquitos; Javier Bosques, The Splinter from the Tree (2007), a personal portrait of the artist’s family life and history; Silvan Kälin, Lagoa do Ouro (2008), a telenovela (soap-opera) presenting a microcosm of the real life dramas of a small village of Pernambuco, Brazil.

In the course of the exhibition the presentation will grow over the space – works and books will be added, the film programme extended. «MICROCLIMA ZURICH TROPICAL» also celebrates Balzac’s attempt to create his own microclimate, a failed attempt to transform the land around his house in Paris into a pineapple farm.

The stationary this press release is printed on is a replica of Marcel Broodthaers’ stationary for his fictional Musée d’art Moderne in 1969, it was replicated by Alejandro Cesarco firstly in 2008 and is now used again on his proposal. >>> Press Release (PDF)

Pablo León de la Barra is a thinker and an exhibition maker
http://centrefortheaestheticrevolution.blogspot.com

Pablo León de la Barra thanks architect Douglas Stewart for collaborating on thinking the idea of the Microclimate, developed one night at a night club in London’s East End, where they identified (and later decided to join) a group of men dancing without shirt and creating their own microclimate in London’s cold winter weather.
www.kunsthallezurich.ch