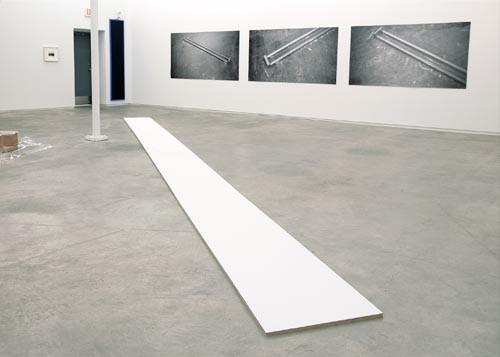 The Kunsthalle Zürich is delighted to present the exhibition «A Literature of Images», a comprehensive retrospective of the work of Ian Wallace, who was born in 1943, lives and works in Vancouver, and is one of the most important representatives of the Vancouver conceptual art scene. The exhibition includes a wide range of the artist’s works extending from the 1970s to the present day. Ian Wallace is renowned as a key figure of the so-called “Vancouver School”. In the course of his career, which is characterised by a continuous commitment to teaching through his role as professor at a number of institutes, including the University of British Colombia, he has had a crucial influence and provided vital support to an entire generation of established artists such as Jeff Wall, Rodney Graham, Ken Lum and Stan Douglas and young artists, including Gareth Moore, Alex Morrison and Arabella Campbell. Although his work can be found in leading museums in Canada and the USA, he remains relatively unknown in Europe.

Ian Wallace’s work has its roots in abstract painting as influenced by Minimal Art, however it has been characterised by the medium of photography since the late 1960s. Important themes in Wallace’s work include questions concerning the status of the media image, its representative function, its political and social implications, and its shifting meaning in the context of art.

As was the case with the exhibition of the work of Liam Gillick «Three Perspectives and a Short Scenario», which we presented at the beginning of the year, this overview of a hitherto seldom-seen oeuvre is based on a project involving several institutions. The exhibition in the Kunsthalle Zürich was developed with the Witte de With Center for Contemporary Art in Rotterdam and the Kunstverein für die Rheinlande und Westfalen in Düsseldorf. The joint exhibition concept involves the presentation and development by each of the institutions of its own thematic focus within the artist’s oeuvre. Thus the retrospective «A Literature of Images» covers not only a temporal and thematic range from the artist’s early to contemporary works, it also links into his presence beyond the exhibition locations.

The exhibition at the Kunsthalle Zürich focuses on works that explore the relationship between the visual image and literature and works that thematise Wallace’s compositions on the city as text – e.g. Attack on Literature (1975) and the series In the Street (1988-89). Another important focus is provided by the series At Work (1983 to the present), in which Ian Wallace examines the role of the artist and the function of the artist’s studio.

Attack on Literature tells the story of four protagonists, i.e. the poet, two muses and a typewriter, on twelve large-format hand-coloured prints based on a formal imitation of film stills. Tellingly, the sheets of text emerging from the typewriter are empty. The work evokes an exploration of language and literature from a fundamentally sceptical perspective and of the rejective stance of art vis-à-vis narrative structures in the 1970s; in his theoretical writings Wallace refers to French Symbolist Stéphane Mallarmé and his late work Un coup de dés (1898), in which the latter consummately translated his ideas into practice in poetry that is highly innovative in terms of its vocabulary, rhythm and syntax. Based on this, Wallace understands the blanks in the text as a metaphor for silence but also the expression of a crisis and his ambivalent attitude to the “empty” monochrome supports in his own work.

While Wallace’s early work is characterised by monochrome painting, he abandoned this technique around 1970 to devote himself to photography. The self-reference inherent to the monochrome painting no longer satisfied him. Wallace understands his early photographs of city scenes as the attempt “to imagine the world as an image of the world” (Ian Wallace). At the same time, working in this medium gives him the opportunity to make a connection between conceptual art “in its purest form” and the real world.

The street scenes presented at the Kunsthalle Zürich originate from a third phase in Wallace’s work, in which he combines monochrome painting and photography in one and the same work: in formal terms what is involved here is the contrasting of the pure surface and an illusion of three-dimensionality, in terms of content the two most important currents in art since 1945 are united.

No paint, no easel, not even a camera are shown in the work In the Studio (1983); just the artist in an empty gallery reading Søren Kierkegaard’s On the Concept of Irony with Continual Reference to Socrates (1841). The artist as thinker and doubter. Wallace continues to develop this work to the present day by examining the meaning and function of the artist’s studio.

The communicative and politically committed dimension of Wallace’s photography are explored in the Witte de With Center in Rotterdam with groups of works such as The Summerscript (1974), The Idea of the University (1990) and Clayoquot Protest (1995). Finally, based on the multipart work, Lookout (1979), the exhibition at the Kunstverein für die Rheinlande und Westfalen Düsseldorf presents explorations of the construction of imagery in association with a cinematographically based staging of reality in the artist’s work.
www.kunsthallezurich.ch